Preparing my back-porch beehive is my favorite rite of spring, but this year my flock mysteriously went missing. I'll miss more than just the honey. 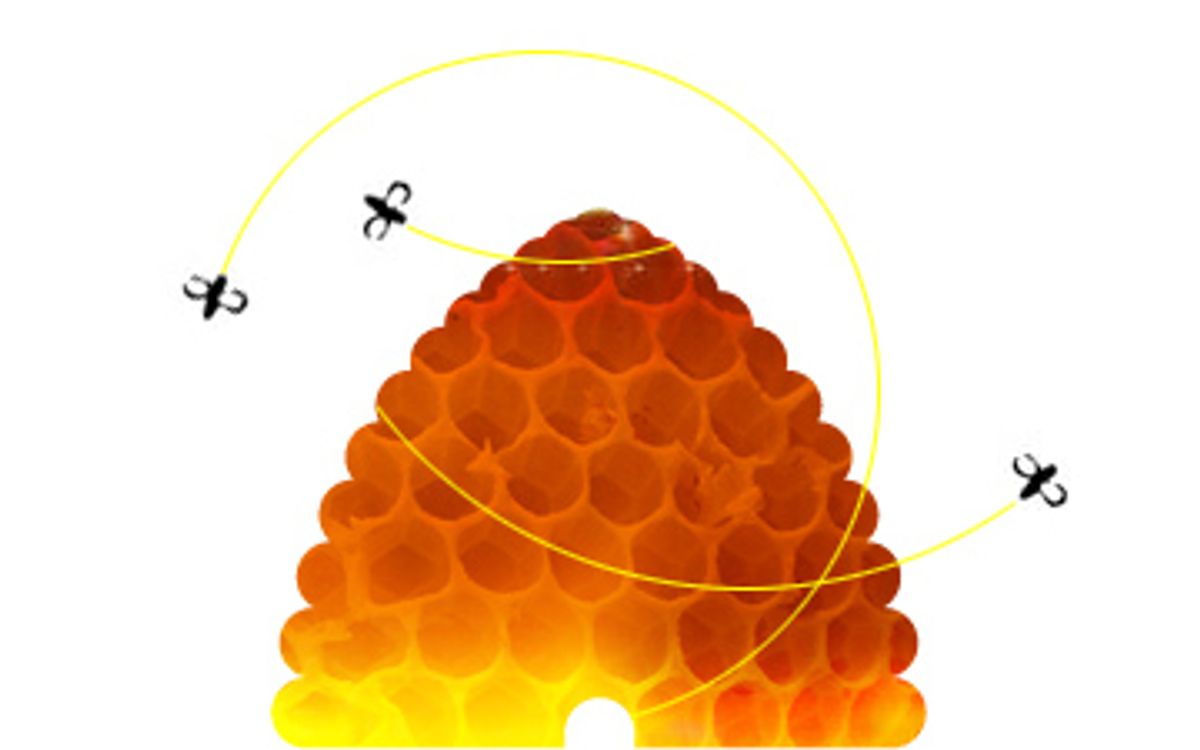 Bee! I'm expecting you!
Was saying yesterday
To someone you know
That you were due.

The frogs got home last week,
Are settled, and at work;
Birds, mostly back,
The clover warm and thick.

You'll get my letter by
The seventeenth; reply
Or better, be with me,
Yours, Fly.

Spring arrived here in Oakland, Calif., and I didn't even notice until the police busted a marijuana-filled warehouse across the street. I was in my garden -- raised vegetable beds in an abandoned lot in the bad part of town -- picking grass and clover for my rabbits, when I heard pounding on the warehouse's metal roll door. Ten black-and-white squad cars screeched up, some emblazoned with the words "Canine Unit." I watched awhile -- the door came up cautiously, the police inched closer -- until, out of the corner of my eye, I was distracted by the most beautiful peach blossoms. Decorating the parking strip between my garden and the just-raided drug warehouse, the blooms were frilly and deep pink, and would have made a good tattoo.

Then I noticed other trees. A weeping Santa Rosa plum, branches like dreadlocks woven with white buds. A three-way grafted apple, each of its girlish pink-and-white blooms promising fruit, a different variety on every branch. Even the eucalyptus across the street, shading the police, was adorned by thousands of filamenty flowers.

All those blooms, but no honeybees.

Like commercial and backyard beekeepers in 22 states around the nation, I recently opened up my beehive for spring inspection, only to discover that my hairy herd had gone missing. For years, the beehive has presided over the deck off my apartment, and the bees bobbed in and out, loaded down with pollen baskets and nectar collected in my garden and in the weedy debris of nearby abandoned lots. But now, nothing.

They left behind no forwarding address nor clues to their whereabouts, and there were no corpses cluttering the hive for my amateur forensic inspection. My flock had simply wandered elsewhere, and likely perished. Bee researchers and and scientists at the Department of Agriculture have christened this unexpected bee holocaust Colony Collapse Disorder and hypothesize that the die-off could be a result of either a fungus, a nicotine-based pesticide, or a virus. (They're working on it.) But in the meantime, CCD could very well spell commercial disaster: for almond farmers whose trees won't be pollinated, for consumers who may face a shortage of apples and peaches and cherries because there are no bees to turn flower into fruit. While my livelihood may not depend on it, as the mistress of one hive on one porch in Oakland, the loss still came with an intense pang of grief, like a death in the family.

When a beekeeper dies, the bees must be informed. I learned this tradition a few years ago, while visiting Slovenia's Apicultural Museum. One of the exhibits was a short film. My mother and I watched as a grandfather trained a lederhosen-wearing boy to be a beekeeper. Shot entirely in golden late afternoon light, it was a bittersweet story, and near the end of the film the grandpa died. A final scene showed the boy hunkered near the hive, his lips moving in a whisper. I knew the boy would have felt the heat of the hive, generated by so many thousands of bees, and that it would have smelled like wax and propolis -- a rich ambrosial aroma. The bees whining through the box would have sounded like a wail. How consoling that act would be in the face of death.

Back then I hadn't yet experienced the loss of a hive -- I was too engrossed in the joyful part. Like installing new packages of bees -- one of life's greatest pleasures. The last one I got, the one that has now died, arrived at the Oakland post office three years ago.

When I pedaled up to retrieve my flock, a few lonely, feral honeybees hovered around the post office. It was April in Northern California, arguably the loveliest month of the year. The postmistress seemed unnerved by their arrival, but admitted she wouldn't mind some honey, if I got the chance. This was Oakland, not Mayberry -- but I nodded and promised anyway. My bike had a basket attached to the front and the humming package fit perfectly inside. As I rode down Telegraph Avenue, I laughed out loud at the bees that trailed us through the traffic and stoplights.

My first colony was a birthday gift, from my beau, Billy, while we were living in Seattle. He loaded me into the car and took me to a small beekeeping shop in the middle of the woods. He promised me a beehive with all the fixings: a smoker, a veil and cap, long, thick gloves, a hive tool, boxes to add as the colony grew, a starter book ("First Lessons in Beekeeping") and a small wire box filled with 3,000 bees and one queen suspended in her own chamber.

I don't have children, but that day I experienced a glimmer of what it must feel like to return from the hospital with a newborn. As we pulled our Dodge Dart away from the forest of Christmas trees, I wondered if I could handle such responsibility. What if I dropped the box? What if they grew up and decided to swarm, or to abandon me? But also, to be honest, I was thinking about getting stung. A lot.

Even if you've been stung before (when I was 12 I stumbled through a yellow-jacket nest and received more than 25 stings), as a beginning beekeeper you worry about your first sting. We're choosing to get stung. It feels a bit transgressive. It certainly seemed so to my next-door neighbor.

"You should move to the country," Trudy said when she saw my buzzing shoe box. She was out on her lawn, trimming the grass with a pair of scissors. Next to her lawn was our raised parking strip garden, a chaotic jumble of tall stalks of fava beans, lettuces and Swiss chard. Most city ordinances allow beekeeping if there is adequate distance from the hive to any neighboring structures. Since we planned to house the hive on our upstairs deck, we were within that legal boundary. And so I marched upstairs to our deck clutching the bee package, hoping I looked like I knew what I was doing.

I put on as much clothing as possible. Triple shirts; a mechanic's jumpsuit; several pairs of socks, hiked up and tucked into my pants; heavy-duty fabric beekeeping gloves (regretting I hadn't bought the more expensive leather ones), and finally, my veil. Swaddled as I was, I could barely put down my arms.

The sun was going down, that lovely April day. I set up the hive to face due east so it would get early morning sun. Installing the bees later in the day avoids confusing them, for they like to spend at least a night in their hive before venturing out. I pried the lid off the bee package and, as instructed, tilted the opening toward the fresh hive body, with its orderly rows of frames just waiting to be filled with honey.

The bees fell out like a liquid, spilling into the box without incident. The bearish man who'd sold them to me had demonstrated how to tap the box out -- like a ketchup bottle -- which I did to get the last of the stragglers. Because of my fear and the sheer volume of my clothing, I had a slick of sweat dripping down my back. But my terror was unfounded: The bees were entirely docile.

Finally, out of the then mostly empty box, I fished out the queen chamber. A few bees, her attendants, clung to the sides. At the bottom was a stopper plug made of candy. The idea is that the workers will eventually chew through the sugary plug and release the queen. But I wanted to see her. So, against proper bee protocol, I popped the candy inward with the end of my hive tool -- and out she emerged. Her ass was enormous; she looked like some kind of exotic beetle. I held her on the top of the new hive, and she strutted across. Was it just me, or did she actually have the gallant air of royalty? Then she was gone, down into her chambers where she would lay all the eggs to keep the hive going.

Most of us carry around a pack of defining moments. Beginning that colony on a gentle spring day is one of my fondest. I received one sting: on my wedding finger.

Six years later, I've made room for a honey extractor in our living room. And each year during prime honey-extracting season -- late summer -- I invite friends over for a sticky party. In preparation, the night before we place a "bee escape" under the super, the box where the honey is stored. The escape allows the bees trapped in the box to flee through narrow tunnels, but prevents them from returning to the box once they've left.

After 12 hours, the entire box of honey is bee-free, and we take it to the kitchen. The super looks like a bottomless dresser drawer, except inside, instead of socks, 10 frames are crammed side by side, lined up like library books. Inside each one, a Bible-size chunk of sealed honeycomb hangs suspended in the rectangular frame. We spin the extractor and centrifugal force splatters the honey on the stainless steel sides, where it drips down and collects at the bottom. Most "real" beekeepers use an extractor with a motor, heaters and filters. But our guests simply steady the hand-spun extractor (which has a tendency to keel over), and crank it as hard as they can. Then they open the valve at the bottom and let the honey dribble out into quart-size Mason jars.

At these gatherings, everyone gets covered in honey, and we eat as much in one sitting as we can bear. The harvest is different every year, and the flavor of the honey can even vary from frame to frame. If a frame appears darker in color, we'll spin and bottle it separately. One year the honey tasted like licorice -- was it from the wild fennel filling so many abandoned lots? Another frame held eucalyptus honey, which had a medicinal taste to it. A different time, the honey was so sweet, it hurt. But no matter how it tastes, the experience always makes everyone involved feel richer for it -- charmed, elated, sated.

Afterward, when I return the honey super to the hive, the bees are always more apt to sting, and they seem, well, upset. That's why beekeepers call it robbing the hive. But bees don't organize a block watch or call the police; they simply get back to doing what they do, which is to salvage any remaining honey and wax and clean up the now mostly empty frames. I take, they give.

But this spring will be different. My honeybees won't pollinate my fruit trees. There'll be no sticky party this summer. My home will seem empty without their comings and goings. I'll even miss their stings.

In Slovenia, you're supposed to tell a hive when the beekeeper dies, but what are you supposed to do when it's the bees that have left you? Should I console myself and whisper into the hive, "It's spring. I'm expecting you." Lean into its warmth and whine, breathe in the scent of that insect cathedral? Maybe. But the box is as cold as winter now, and there's nothing inside to receive the news.