Democrats burning for the inspirational uplift of Barack Obama or the left-leaning edge of John Edwards may not be ready for an authentic moderate. 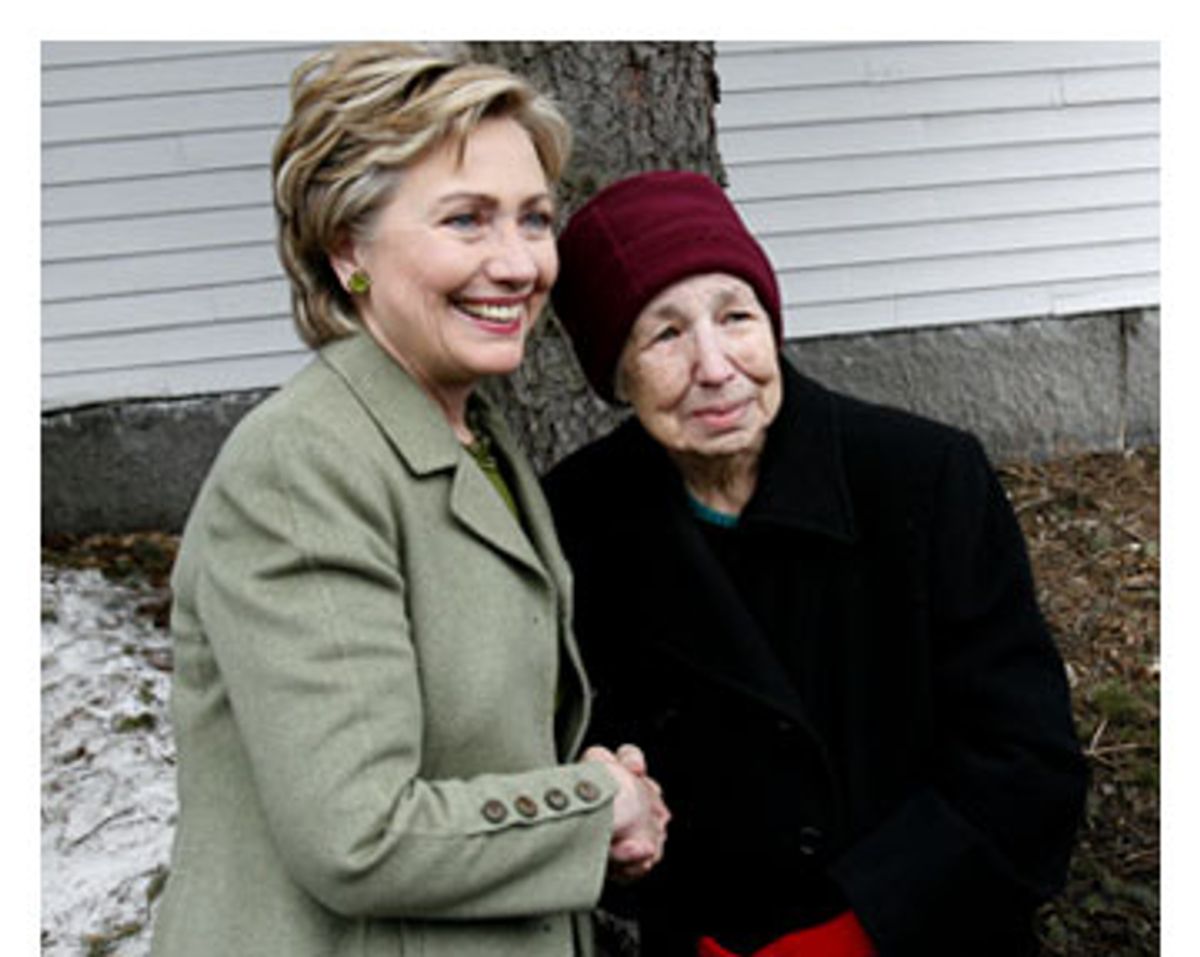 The whispered word was that Hillary Clinton would make a spontaneous, unscheduled stop at Swan Chocolates before her speech on Saturday night to the New Hampshire Democratic Party. And the sight of a Fox News satellite uplink truck parked across the street from the downtown Nashua locale underscored how tightly held the secret was.

The scene inside the crowded chocolate shop provided a glimpse of Clinton's strengths as a glad-hander in the intimate environment of the first primary state. Wearing an olive suit over a scoop-neck green sweater, she delivered the smiling banalities of the campaign trail ("Hi, how are you ... Nice to see you ... It smells awfully good in here") with an enthusiasm that appeared unfeigned rather than forced.

Fifteen years after Bill Clinton narrowly survived a New Hampshire primary built around Gennifer Flowers and his draft record, Hillary seems a familiar figure, less a rock-star candidate than an actress on an afternoon soap whom everyone has watched endure and mature. Even voter comments that might come across as catty in a New York tabloid were delivered with a tone of bemused affection. A middle-aged woman in a red pullover whispered to a friend when the candidate arrived, "She looks pretty good. I think she's had a little work done."

Hillary's candidacy inevitably prompts a return to the Clinton years. Neal Brown -- an electrician and recently naturalized citizen from Northern Ireland who will be voting in his first New Hampshire primary -- is unequivocally for Hillary. "Ten years ago, I saw Hillary and Bill in Belfast," he said, "and their visit made a phenomenal difference."

But as Brown held his 4-year-old daughter, Sophia, on his shoulders, he found himself jostling for position with an unidentified man in his early 20s who kept calling out, "Hillary, I want to be your intern." In case the heavy-handed Monica Lewinsky reference was not obvious, the heckler (maybe on work release from the College Republicans) then brandished a cigar as a purported gift for the candidate. Totally unfazed, a Hillary aide accepted the cigar and even murmured, "Thank you," as if the offering had been something innocuous like a hand-knitted tea cozy.

The press and the political community have been anticipating a Hillary presidential race for so long that it seems oddly anticlimactic that the New York senator was in New Hampshire over the weekend for her third visit as an unabashed candidate. It is difficult to cut through the mists of myth to see her in conventional political terms rather than as a collection of clichés about ambition, mission and vindication.

Since the 1992 campaign, she has been scrutinized and psychoanalyzed (armchair division) more than any woman in America -- and maybe even more than her husband. During the early, innocent days of the Clinton administration, I interviewed the first lady in the White House for Esquire. "I'm a Rorschach test," she said at the time, referring to all the expectations that were placed on her as a feminist, a child of the 1960s, a mother, a career woman married to a rambling man, and a policy partner to the president. Nearly 14 years later, that comment about ink blots remains truer than ever, as it is almost an American birthright to have a personal theory about the Clinton marriage, Hillary's motivations and potential power-sharing in the White House.

The Clinton campaign believes that flesh-and-blood Hillary is a far more appealing candidate than the symbolic figure who shares her name and public history. When pressed, her advisors will grudgingly admit that she does come across as stiff in formal speeches. But they argue that she excels in town meetings with voters. That is why so much emphasis during this initial stage has gone into creating so-called conversations with the voters, whether through webcasts or town meetings in the early primary and caucus states. As Nick Clemons, who directs the Clinton campaign in New Hampshire, put it, "The Democrats and independents we're putting her in front of are being reintroduced to someone they really don't know." Referring to Republican demonology, Clemons went on to say, "People think they know her, but the argument has been framed by the other side. We're starting this campaign in a 2-foot-deep hole and now we're getting to the other side."

In her speech at the New Hampshire Democratic dinner, a sold-out fund- raiser that brought in $200,000 for the state party, she unveiled a rhetorical flourish that aides promised would become an integral part of her evolving campaign stump speech. Evoking everything from Franklin Roosevelt's "Forgotten Man" to John Edwards' 2004 lament over "Two Americas," Hillary warned that "America's middle class and working families have become the invisible Americans."

There was nothing wrong with the conceit: "You are invisible to the companies who outsource your job, or lay you off or end the promise of your pension. For six long years, President Bush and the Washington Republicans have looked right through you." But like so many of Clinton's formal words from behind a lectern, they came across as generic sentiments that might be uttered by any mainstream Democrat. As a Washington Democratic consultant, unaligned with any 2008 presidential candidate, put it, "I don't see a clear message from her. I just see a laundry list."

Compared to, say, Edwards who has donned sackcloth and ashes over his 2002 Senate vote in favor of the Iraq war and has promised to provide healthcare coverage for all Americans in his first term in the White House, Hillary does come across as restrained and understated. But rather than a cynical political tactic, Clinton's refusal to apologize for her Iraq vote and her sadder-but-wiser incremental approach to healthcare reform may represent something basic -- her core beliefs.

The search for the secret Hillary ideology may be akin to Poe's "The Purloined Letter," where the evidence was hidden in plain sight. Conversations with people who have worked closely with the former first lady for years keep coming back to the notion that she is not a firebrand nor a quixotic crusader, but a politician who believes that progress comes through incremental steps. They say this is why she will not get into a bidding war with Edwards on healthcare. And they portray her reluctance to recant her Iraq vote as an act of intellectual honesty; what she regrets is the way that Bush misused the authority given to him by Congress and grotesquely mismanaged the war.

Indeed, in conversations about Hillary the word "practical" is repeated like a mantra. A version of this comes in an on-the-record comment from Neera Tanden, the policy director for the Clinton campaign: "Hillary is a very practical person -- a practical progressive."

Before the 2006 elections, the most potent argument against a Hillary nomination was that she could not win the general election because of the bitter residue from the Clinton Wars of the 1990s. Now with the Republican Party in free fall and the three leading GOP contenders (John McCain, Mitt Romney and Rudy Giuliani) supporting escalation of the Iraq war, it is far more difficult to contend that Edwards or Barack Obama could be more easily elected than Clinton. Not only is 2008 shaping up as a Democratic year, but Hillary does boast the added virtue of being the candidate least likely to succumb to deer- in-the-headlights paralysis when confronted with a bitter GOP attack.

It is foolhardy to make any firm predictions about the 2008 primaries this far in advance for, as Clinton said in her Saturday night speech, "We're going to have a long campaign. It's l-o-o-n-n-g-g ... I try to think forward and it's hard to see over the horizon." But over that horizon, there is a lingering question over whether Hillary's slow-to-develop opposition to the war in Iraq and her incremental approach to domestic policy will limit her appeal to party activists, who will play an oversize role in selecting a nominee in states like New Hampshire and Iowa.

This may be a year when the Democrats burn red hot, yearning for the inspirational uplift of Obama or the left-leaning ideological edge of Edwards. But no newly elected Democratic president in modern times (not Kennedy, Carter or Clinton) entered the Oval Office with anything to match the New York senator's eight-year understanding of how the White House works. For Hillary Clinton, an authentic moderate Democrat, that hard-earned wisdom comes with a sense of political prudence and caution. These can be admirable qualities in a president, but after eight years of Bush and Cheney, they are not necessarily a winning formula for a candidate locked in an arduous battle for the Democratic nomination.