Raising funds for his run at the presidency, Bill Richardson has an unlikely role model -- Michael Dukakis. 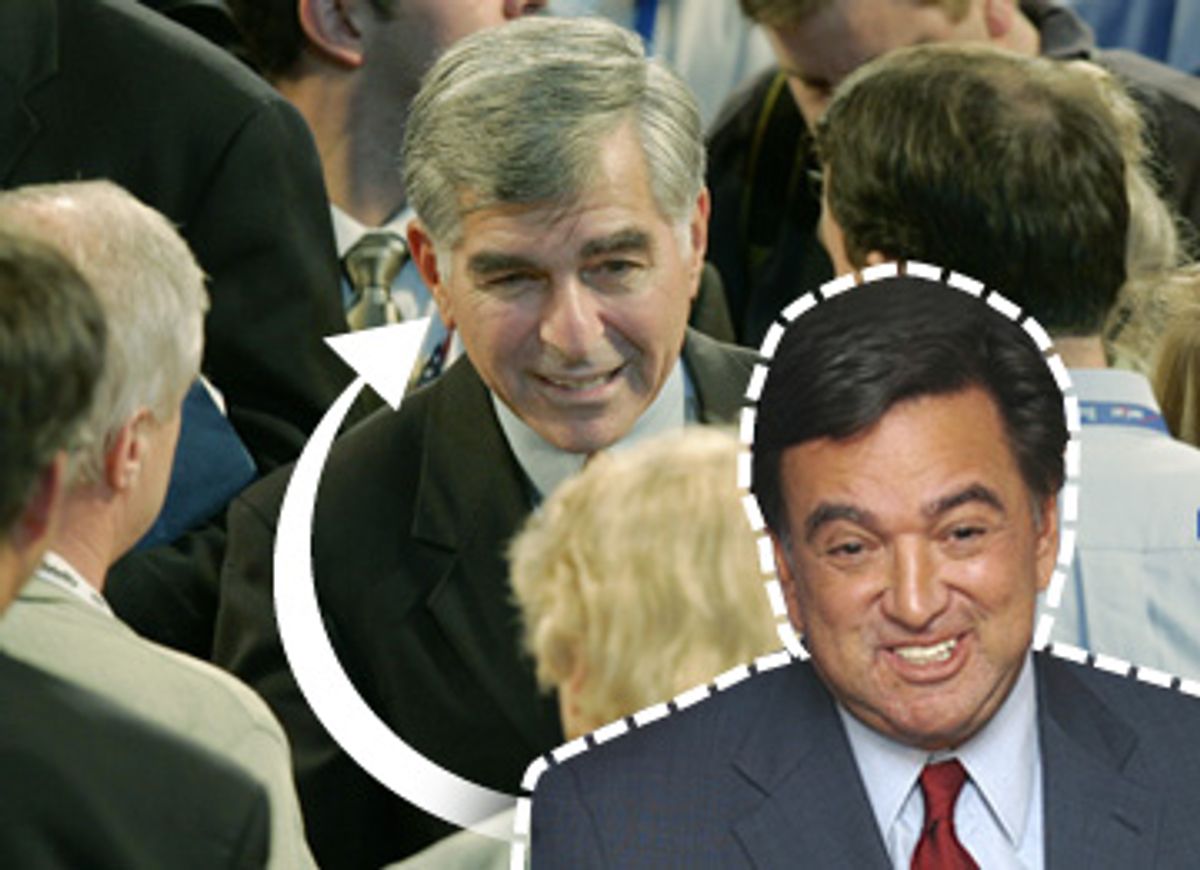 These days, Hispanic leader Henry Cisneros is trying to act more like a Greek.

Not an ancient Greek or a modern Greek or even Zorba the Greek. He wants to mimic the leaders of the Greek-American community, circa 1987, whose spontaneous outpouring of ethnic pride -- and more important, campaign contributions -- helped make a small-state governor, Michael Dukakis, the Democratic nominee for president.

This time, Cisneros, a secretary of housing and urban development during the Clinton administration, hopes to rally Hispanic Americans behind New Mexico Gov. Bill Richardson, the only candidate for president with a Mexican mother. "The model we use is the Greek community that supported Dukakis," Cisneros explained last week. "There is a real sense of pride in the fact that a Hispanic candidate is running for the president of the United States."

In recent months, Cisneros has joined other Hispanic leaders to collect campaign checks for one of their own. In February, Mickey Ibarra, a former Clinton official turned lobbyist, organized a "Latino Leader" fundraising breakfast for Richardson in Washington. Ed Romero, an Albuquerque businessman who served as ambassador to Spain, has been making calls from New Mexico that helped Richardson score $2 million at a recent fundraiser there. In Atlanta, former Georgia state Sen. Sam Zamarripa hosted an event for Richardson. And this Sunday, former Dallas city councilman Domingo Garcia and trial lawyers Marcos Ronquillo and Adelfa Callejo will host a $50,000 Dallas fundraiser for Richardson as he begins a two-day swing through Texas.

Top campaign officials expect this support among Hispanic leaders to allow Richardson, a second-tier candidate, to look competitive next month when all of the campaigns release their first-quarter fundraising numbers. "I think Richardson is going to surprise people with his ability to raise money," Cisneros said. Nonetheless, expectations are relatively low for Richardson. While Democratic front-runners Hillary Clinton and Barack Obama could bring in more than $20 million each in the first quarter, Richardson will at best raise roughly half as much, making the money he receives from Hispanic fundraisers that much more important.

This was, in many ways, the situation that greeted Dukakis in 1987, when he began his race for the Democratic nomination far behind the Democratic front-runner, Colorado Sen. Gary Hart. "Like the Latino community, Greeks are very proud of their own," Dukakis said in a phone call Tuesday from the University of California at Los Angeles, where he is teaching. "Particularly in the early stages, to have a community like that, who had done well and was extremely supportive, was very helpful." In the first months of the primary season, the Dukakis campaign pulled in millions of dollars by tapping networks through the Greek Orthodox Church and Greek-American fraternal organizations. "It wasn't just the lawyers and the power brokers," remembers Nick Mitropoulos, who worked as a special assistant to Dukakis in 1988. "We were getting $100 and $50 from every pizza parlor guy in America basically." Dukakis won the nomination fight, but badly lost the general election to George H.W. Bush.

Cisneros and the Richardson campaign, however, have both a harder job and a bigger potential upside than the Dukakis campaign. Unlike the Greek community, Hispanic Americans are a diverse and often parochial group, spanning the heavily Democratic Puerto Rican and Dominican enclaves of the Northeast, the traditionally Republican Cuban contingent of South Florida and the more bipartisan Mexican-Americans of the Southwest and West. But they are also far more numerous than Greek-Americans, who make up less than one-half of 1 percent of the U.S. population. At more than 40 million, Hispanics are now the largest minority in the country. And most of them are Mexican-American, like Richardson, and are concentrated in Richardson's home region.

Richardson's fundraisers are hoping to make him the latest in a string of recent candidates to benefit from a growing national network of Hispanic fundraisers. In recent years, Cisneros, Ibarra, Garcia and others have participated in regular conference calls to raise money for Los Angeles Mayor Antonio Villaraigosa, Colorado Sen. Ken Salazar and New Jersey Sen. Robert Menendez, among others.

"This is an emerging political consciousness," says Garcia, the Dallas city councilman who now practices personal-injury law. "2006 was a catalyst year." In part, Garcia and others say, Latinos have been politically mobilized by the immigration rights movement, which rallied hundreds of thousands of people last year in cities across the nation. That translated into a shift toward Democratic candidates and a blurring of the lines between various national identities. "The mega-marches that occurred around the country created a sort of pan-Latino consciousness."

Richardson also faces some tough competition for Hispanic support from the other Democratic candidates. Hillary Clinton has already signed up Jose Villarreal, a former aide to Bill Clinton and a fundraiser for John Kerry in 2004, and Raul Yzaguirre, a former president of the National Council of La Raza, a Hispanic civil rights group. For his part, Barack Obama made a very public appearance last week at the council's awards banquet in Washington. Obama also announced last week that he was co-sponsoring a bill to encourage the naturalization of illegal immigrants now working in the United States. "The relationship between the United States and Mexico is among our most important in the world," he said, in a recent address on the Senate floor.

But others, like former Clinton officials Cisneros and Ibarra, have chosen ethnic loyalty and Richardson's potential over old ties to the Clinton family. "I had to personally explain to Hillary Clinton and to Bill Clinton that I can't go around the country talking about the Latino trajectory of progress, and then look the other way when there is a credible candidate running for president of the United States," said Cisneros, who now works as chairman of CityView, a company with offices in San Antonio and Santa Monica, Calif., that develops residential housing. "We have been waiting for this day a long time."