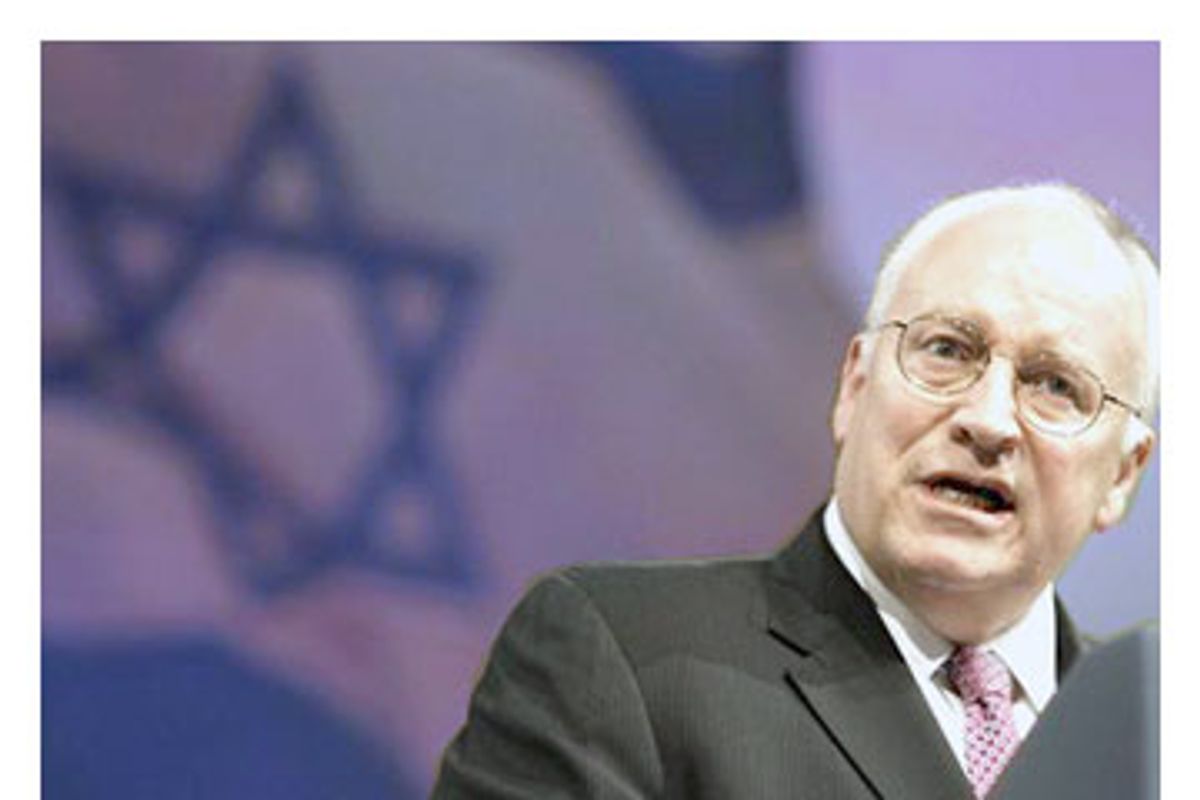 At the annual policy conference of the American Israel Public Affairs Committee this week in Washington, a conservative Christian couple from eastern Tennessee told me that their son had decided to join the Israeli army. It was one of many surreal moments during the three-day gathering hosted by AIPAC, the lobbying group devoted to ensuring close U.S.-Israel ties that remains extraordinarily influential in Washington. "We just love God, and we just love Israel," the couple beamed, when I asked why they had come to the conference.

Amid an energized and at times almost circuslike atmosphere, just about everyone in attendance shared two main preoccupations: the 2008 U.S. presidential election and confronting Iran. And this year's conference saw record attendance: more than 6,000 people, coming from every state in the country and exceeding last year's crowd of around 5,000. Many of them were American Jews, of course, but the evangelical Christian community also made a strong showing. For those feeling apocalyptic about the turmoil in the Middle East, pastor John Hagee was there to greet them. Of the many prominent speakers at the conference, Hagee got one of the most enthusiastic receptions.

"The sleeping giant of Christian Zionism has awoken!" Hagee proclaimed, taking the microphone at the opening dinner reception on Sunday. The electrified crowd -- most of it Jewish -- roared in support, pounding on the tables. Hagee went on to declare the United Nations a "political brothel" and asserted that Israel must never give up land. He agreed with Israeli writer Dore Gold that granting part of Jerusalem to the Palestinians would be "tantamount to turning it over to the Taliban." And, after rebuking Iranian President Mahmoud Ahmadinejad, he led the crowd in a chant of "Israel lives!" urging them to "shout it from the mountaintops!"

During Hagee's oratory, an AIPAC delegate sitting near me said, "I'm going to vote for him instead of McCain."

AIPAC, whose own literature notes that it has been described by the New York Times as "the most important organization affecting America's relationship with Israel," has been highly successful in building strong relationships with both U.S. political parties. This year's conference was attended by everyone from Vice President Dick Cheney to Hillary Clinton and Barack Obama (and other 2008 presidential contenders), as well as former CIA director James Woolsey. Leaders from Congress were there, as were numerous officials from the State Department and White House.

On Monday morning, Cheney got a warm reception and forceful applause for familiar speech lines, such as his assertion that the "only option" against terrorists is to "go on the offensive." Many rank-and-file members of AIPAC seemed to be spoiling for military action against Iran -- "We have to do to them what we did to Saddam," one delegate told me -- but AIPAC's leadership remained strikingly circumspect about it. No AIPAC leaders mentioned war with Iran in the speeches, receptions or panel discussions I attended, and very few of the prominent outside speakers did either. At times this put them at odds with the grass-roots delegates; Marvin Feuer, AIPAC's director of policy and government affairs, was verbally attacked by a conference attendee as "weak" when he downplayed military options against Iran during a Q&A session.

But AIPAC leaders are pushing for a different kind of offensive against Iran: a new program of sanctions much harsher than any prior one imposed through the United Nations. The plan, which one panelist called a "quiet campaign" to strike at Iran on the financial battlefield, would include increased pressures on foreign allies who do business with Iran, a U.S.-wide campaign of divestment, and other measures intended to put crippling economic pressure on the Islamic republic. Sarah Steelman, the state treasurer of Missouri, described how she has worked to restrict the state's investments in companies that do business with Iran, and urged AIPAC members to lobby their own state governments to institute similar policies. Steven Perles, a lawyer, explained how it was possible to tie up the assets of the Iranian government and financial institutions by engaging them in lawsuits for their funding of terrorist groups.

Former Israeli Prime Minister Benjamin Netanyahu has for some time been pushing for such efforts, and in a closed-door briefing during the conference he said that they could prove fatal to Iran: "Fewer and fewer companies will enter Iran. More and more will leave. Investment dollars and the technology it buys will dry up. The lifeline of a hated regime will be cut, its future imperiled."

In addition to the many panels at the conference, which often felt akin to pep rallies, delegates also attended "lobbying labs," where AIPAC staff schooled them on how to effectively persuade their congressional representatives to follow AIPAC policies. These sessions were not open to the media, nor even mentioned on the schedule of events distributed to members of the press. But AIPAC leaders repeatedly urged delegates to attend them. And on Tuesday, the organization deployed its army of lobbyists to push for new sanctions against Iran, which are contained in a new bill called the Iran Counter-Proliferation Act, introduced by Democrat Tom Lantos and Republican Ileana Ros-Lehtinen, the ranking members of the House Committee on Foreign Affairs.

When the thousands of lobbyists descended on Capitol Hill, they were greeted by nearly every U.S. senator and more than half the members of the House of Representatives -- approximately 500 meetings were held between AIPAC representatives and members of Congress on Tuesday alone. In addition to pushing for the sanctions plan, the goal was to showcase the strength of AIPAC and establish more ties for future communication and lobbying.

The AIPAC activists were aided in their mission by some members of Congress themselves, who advised them how to reach out to their colleagues.

"Our commitment to Israel defines us as a nation," said Republican Norm Coleman of Minnesota, a member of the Senate Foreign Relations Committee, adding that the AIPAC lobbyists "help make sure that we don't forget."

Nita Lowey, a Democratic representative from New York, said the best strategy toward that goal was to keep pointing out to lawmakers that the relationship with Israel "is in the U.S. interest."

"I don't sit behind my desk and come up with this stuff," Coleman said, stressing that he often consulted AIPAC executive director Howard Kohr for policy advice. Barbara Mikulski, a Democrat from Maryland, said that she, too, often spoke to Kohr and others in the AIPAC leadership. "They're like daily phone calls," she said, as other Democratic and Republican members of Congress onstage nodded in agreement.

Displays of bipartisan support filled the conference. Even if Democrats and Republicans bicker on every other issue, AIPAC leaders seemed constantly eager to stress that one thing on which the parties can come together is unswerving devotion to Israel. Tuesday morning, just before the AIPAC activists got ready to descend on Capitol Hill with their talking points in hand, for example, Democratic Speaker of the House Nancy Pelosi and Republican Minority Leader John Boehner each addressed the delegates, assuring them of a staunch commitment to Israel's security. At one point, when Pelosi took the opportunity to criticize the Bush administration's surge plan, she was booed by some of the assembled delegates. Boehner, meanwhile, got a standing ovation, after saying, "Who does not believe that failure in Iraq is not a direct threat to the state of Israel? The consequences of failure in Iraq are so ominous for the United States you can't even begin to think about it."

The closing gala dinner on Monday night was attended by a who's who of Washington's A-list. At that event, AIPAC's executive members -- accompanied by music that was fit for a Hollywood superhero movie -- read what they excitedly referred to as "the roll call" of those in attendance. It took 13 minutes and included the bulk of Congress, as well as high-ranking officials from the White House, the State Department and the National Security Council. Meanwhile, Israeli Prime Minister Ehud Olmert -- addressing the crowd via teleconference from Jerusalem -- waded into America's debate over Iraq in a manner that the Israeli leadership has avoided until now. He openly urged AIPAC delegates to push Congress to support the Bush administration's current strategy in Iraq. In the few days since, Olmert has been sharply criticized by the Israeli press and other members of his own government. (Many in Israel believe that it is inappropriate for an Israeli head of state to try to overtly influence an American debate.)

Much focus was on who will next sit in the Oval Office. Before and after the dinner, the presidential candidates and their colleagues from Congress schmoozed with the AIPAC delegates. Circulating through the crowd, Joe Biden made sure his presence was registered. "Hi, I'm Joe Biden!" he said repeatedly, adding several times, "I've been hanging out with AIPAC for years!"

When one European journalist saw the throng around Biden, he ran over, asking nobody in particular, "Is that Hillary?" A few moments later, he emerged looking disappointed. "No," he said, in all seriousness, "I don't know who that is, but I think it might be Charlton Heston."

Following the dinner, Clinton and Obama held competing dessert receptions in the conference center -- in rooms about 25 yards apart -- both eager to highlight their pro-Israel credentials. Debates ensued over which one to attend. "I can't decide," one AIPAC delegate said. "I'd really like to see Obama in person, but Hillary is better for Israel."

About 1,000 people attended Obama's event, but so many attended Clinton's that they spilled out into the hallway.

In their effort to maintain their image of bipartisanship, AIPAC's leadership is remaining firmly on the sidelines in looking ahead to the 2008 elections. On the surface, at least, they are maintaining the position that all the candidates will be equally good for Israel. When I inquired about Barack Obama and the oft-raised notion that he lacks foreign policy experience, AIPAC's spokesperson, Josh Block, quickly brushed this concern aside, saying that Obama "has a strong record from his time in the Senate." There were those at the conference, however, who had made it their mission to make sure other delegates knew that Obama had recently said, "Nobody is suffering more than the Palestinian people" at a recent event in Iowa -- a statement that served to anger some AIPAC delegates.

Particularly striking, though, was the predominant attitude at the conference about the administration still in office. During the opening night's events, large video screens behind the speaker's podium showed a chronological slide show of U.S. presidents and their Israeli prime minister contemporaries, and when the display eventually reached George W. Bush, the room erupted into applause -- far more applause than the crowd had given for Reagan, Kennedy or even Truman. And when Cheney first appeared on the stage on Monday morning, the crowd immediately rose to its feet and filled the room with loud applause, which continued intermittently through his predictably hawkish speech.

It seemed a remarkable contrast to the currently dismal public opinion polls regarding Bush and Cheney. As one delegate standing nearby commented during the vice president's speech, "This has got to be the last crowd that still greets him this way."