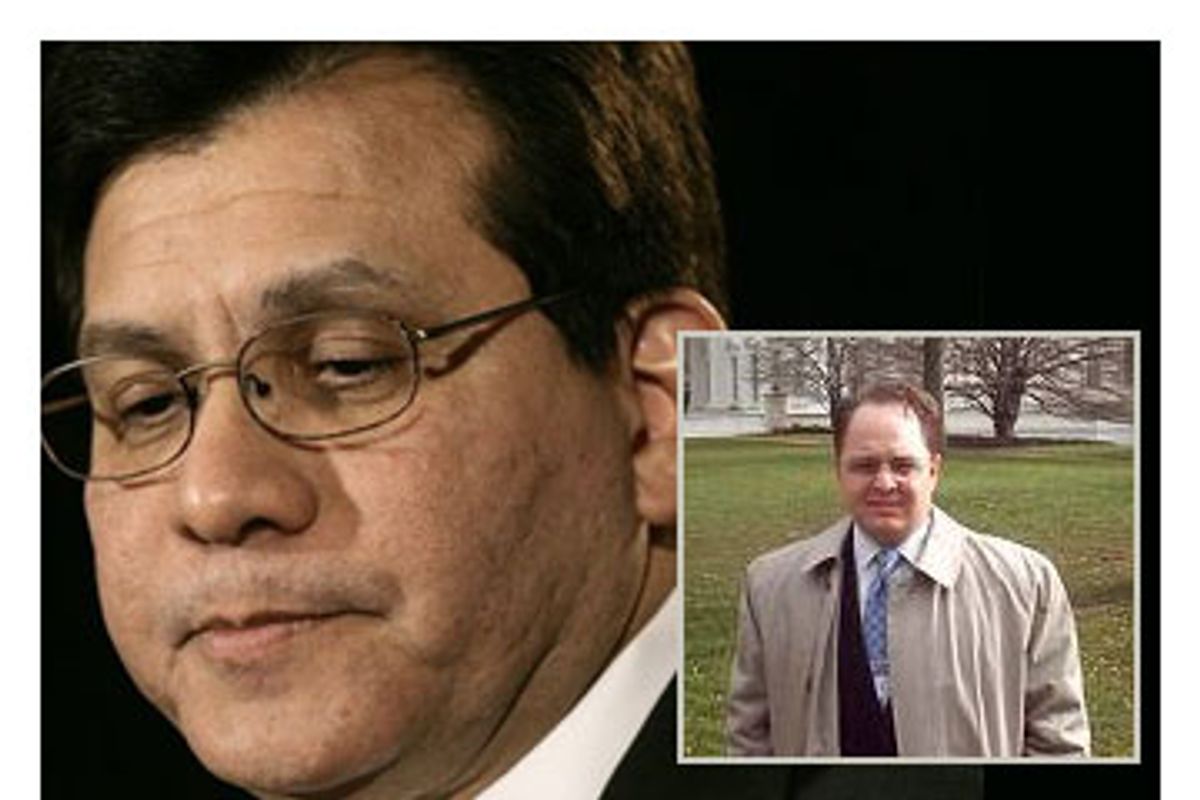 Bush officials have denied the firings were politically motivated, and have stuck to their core story that all but one of the U.S. attorneys were sacked due to poor performance or policy disputes. That story began to fall apart when six of the attorneys testified on Capitol Hill in early March, and it continues to crumble in light of e-mails and other documents detailing long-running plans for the purge.

Under threat of subpoena by congressional Democrats, the administration has appeared so far to cooperate in turning over documents. Many of the documents released have contained damning details about partisan evaluation of U.S. attorneys -- praising those who "exhibited loyalty" to President Bush -- and White House involvement in the firings, which was previously denied.

Less attention has been paid, however, to how the administration has used the release of the documents to shore up its explanation for the firings, further disparaging the reputations of the attorneys sent packing. While at least some key political details were carefully redacted -- including names of the candidates top officials wanted to install in the vacated posts -- e-mails criticizing some of the fired U.S. attorneys were publicized. But the disclosure of those criticisms distorts the truth about the attorneys' work and why they may have really been fired, according to several sources who spoke with Salon.

"I don't think those e-mails have any credibility at all," Bud Cummins, the U.S. attorney forced out in Arkansas, said in a phone interview on Sunday. "With all these alleged performance problems, there's an explanation behind every one of them demonstrating that, short of any other evidence, they are pretexts for their decision."

On Sept. 20, 2006, Ward wrote to Sampson, "We have two U.S. Attorneys who are unwilling to take good cases we have presented to them. They are Paul Charlton in Phoenix (this is urgent) and Dan Bogden in Las Vegas."

"In light of the AG's [attorney general's] comments ... to 'kick butt and take names', what do you suggest I do?" Ward continued. "If you want to act on what I give you, I will be glad to provide a little more context for each of the two situations."

According to an attorney familiar with the "good case" in question, the Sept. 20 e-mail is not an accurate measure of Charlton's work -- because Charlton's office did take the case. Upon further consultation with Deputy Attorney General Paul McNulty's office in Washington, the attorney said, Charlton opened an investigation into the pornography business Ward wanted to target, called Five Star Video. That investigation is ongoing, according to the attorney.

In fact, Charlton's office was on the leading edge of adult obscenity prosecutions, according to the attorney, who is familiar with the case load of the office. At the time Ward was pushing the Five Star Video case, Charlton's office was already pursuing an investigation of adult obscenity distributed via SPAM e-mail, the first case of its kind in the nation, the attorney said.

Meanwhile, just prior to that fall, Charlton's office had launched an investigation into land dealings by Arizona Republican Rep. Rick Renzi. (No charges have been filed to date, and Renzi denies any wrongdoing.) Some congressional Democrats have said they suspect that some of the U.S. attorneys may have been forced out to suppress investigations into Republican corruption -- an issue also swirling around the firing of San Diego U.S. Attorney Carol Lam.

The e-mails made public suggesting problems with Charlton -- another one raised the issue of drug enforcement -- do not match the reasons cited by Associate Deputy Attorney General William Moschella in recent congressional testimony. On March 6, Moschella told lawmakers that Charlton was fired for his views on death penalty cases and recording the confessions of suspects interviewed by law enforcement officials.

Further scrutiny of the case Ward presented to Bodgen in Nevada reveals a similar story. A former senior law enforcement official knowledgeable about the work of the Nevada U.S. attorney's office said he was shocked to see the criticism of Bogden in the Sept. 20 e-mail. The case in question, involving adult obscenity on the Internet, was "woefully deficient" of details according to the official, who confirmed that Ward had gone to Nevada in early September 2006 to present it. "All they had was a Web site," he said. "They didn't have a target fully identified, they had no assets -- they didn't even know where the guy was managing his server."

Porn offenses are difficult to prosecute successfully, since prosecutors must show that the materials have violated local "community standards." And Bogden is based in Las Vegas. Any reservations that Bogden -- or Charlton -- raised about Ward's cases might explain the aggrieved tone of the task force leader's Sept. 20 e-mail to Washington. Nevertheless, Bogden, like Charlton, was ultimately willing to do Ward's bidding. His office agreed to put together a proposal for pursuing the case, outlining the additional work and resources needed to build it, the official said. The implication that Bogden was refusing to take on a "good case" in that instance, the official said, "is totally absurd."

"I think the prime motivation of Kyle Sampson and others was to create vacancies for themselves and their friends," Cummins said on Sunday. "They were throwing in a variety of justifications -- obscenity cases, discussions of immigration, their 'loyalty' list -- merely to build some kind of justification for their recommendations." Cummins added that it was his view that communications to the Department of Justice and the White House from Republican leaders in New Mexico and Washington state -- who were angry with the U.S. attorneys there for not pursuing voter fraud cases to those Republicans' satisfaction -- also helped get David Iglesias of New Mexico and John McKay of Washington added to the hit list.

According to other documents disclosed last week, as with both Iglesias and McKay, neither Charlton nor Bogden was originally targeted on a list drawn up by Sampson in early 2005 of U.S. attorneys to be fired. But by Sept. 13, 2006, in an e-mail from Sampson to then White House counsel Harriet Miers, Charlton and Bogden appeared on a list of U.S. attorneys Sampson said "we should now consider pushing out."

The e-mail from Ward referring to problems with Charlton and Bogden over adult obscenity cases -- and asking Sampson if he wanted more details "to act on" -- was sent one week later.