So you think you know politics

What does the new thicket of Feb. 5 primaries mean for 2008? Will more voters have influence, as Schwarzenegger claims, or will it all still be decided in New Hampshire and Iowa? 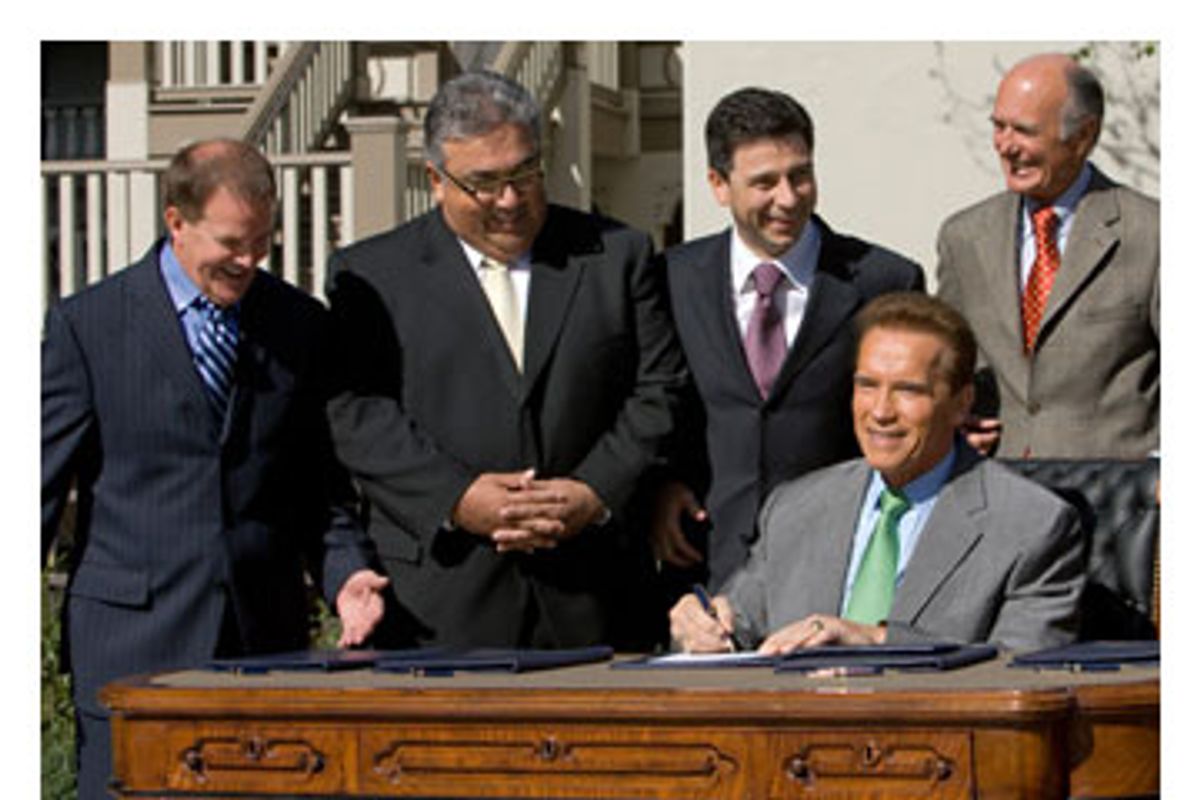 Back when baseball was indeed the national pastime, the Saturday Evening Post (a major weekly magazine from the era when reading words on paper was also a national pastime) boasted a feature called "So You Think You Know Baseball." By challenging readers to guess the rules governing wacky three-men-on-third-base plays, it underscored the complexities of a game that all red-blooded Americans assumed they understood.

These days, we are in a similar situation with presidential politics. Almost daily a news organization releases a new 2008 poll -- and often it contradicts the prior one. The press also breathlessly chronicles the campaign-finance wars and the horse-race ratings. But the clichés that govern cocktail-party chatter about the presidential race can often be questionable, misleading or even flat-out wrong. So, in the bygone spirit of the Saturday Evening Post, we are beginning an occasional campaign feature dubbed "So You Think You Know Politics."

THE SITUATION
With California Gov. Arnold Schwarzenegger leading the charge, 23 states (containing more than half the nation's voters) have approved or are poised to pass legislation to hold a presidential primary on Tuesday, Feb. 5, just 22 days after the opening-gun Iowa caucuses. For the first time in history, Americans will go to the polls in a de facto national primary. As Schwarzenegger said last Thursday in signing the California primary legislation, "Holding our presidential primaries in June used to mean nominees were locked before we ever had a chance to vote. I'm happy to say these days are over. We will get the respect California deserves."

Meanwhile, presidential candidates are collecting record amounts of money as the clock ticks down toward the initial end-of-this-month reporting period to the federal government. While campaigns are notorious for peddling disinformation about their fundraising, the National Journal estimates that four candidates (Clinton, Obama, John McCain and Mitt Romney) could each rake in more than $20 million in the first quarter. In comparison, four years ago at this time John Edwards led the Democratic field by raising $7.4 million in the first three months of 2003.

YOU MAKE THE CALL
Is Arnold right -- and will the candidates suddenly start spending more time in Anaheim than they do in Ames, Iowa? Does the thicket of Feb. 5 primaries (Florida, Illinois, Michigan, New York and Texas are other major states slated for that super-dooper, party-pooper Tuesday) mean that choosing the nominees will be a mass-participation sport for the first time in history? Will the races for the Democratic and Republican nominations end up being decided by money alone? Is it true that unless a candidate can raise $150 million for the primaries (three times what Howard Dean corralled to lead the Democrats in the early going in 2004), he might as well start working on his memoirs now, since he will never have to write about his White House years? (The masculine pronoun in the prior sentence was deliberate, since Hillary is the candidate most likely to set a fundraising record).

THE VIEW FROM THE DUGOUT
While nothing is certain in presidential politics (just ask President Kerry) and the biggest thing that experience teaches is humility, the shrewdest answer to each of those knotty questions is a firm no. Conversations with top advisors to leading candidates in both parties, as well as veterans of prior presidential campaigns, all point to the conclusion that the more things change with the campaign calendar, the more they remain the same.

Iowa and New Hampshire (whose primary is currently scheduled for Jan. 22) are likely to be more influential than ever, though those states will share their kingmaker role with South Carolina (Jan. 29). On the Democratic side, the Jan. 19 Nevada caucuses may play a role as well, but it is still hard to decipher where that state will ultimately fit in the Big Casino of presidential politics.

What this means -- for all the hype about Feb. 5 -- is that probably fewer than 700,000 Democrats will select a nominee. That figure is based on the 2004 vote totals from the Iowa caucuses and New Hampshire and South Carolina primaries, plus a guess-timate of 50,000 Nevada Democrats, since the state has no history of holding meaningful caucuses. On the Republican side, the number may be closer to 900,000 (based on the 2000 results), since there are far more South Carolina Republicans than Democrats.

Beyond habit, where is the logic for stressing these tiny states, given the creation of a national primary?

Mark Mellman -- who was John Kerry's pollster in 2004 but is not involved in the current presidential race -- sketched out in an article for "The Hill" (as in Capitol Hill), the three-decade history of national voters instinctively flocking to the winner of the early contests. Back in 1976, Jimmy Carter was at just 4 percent in the national polls before he won Iowa. Four years later, George H.W. Bush saw his national support in the polls more than double after he beat Ronald Reagan in the caucuses. And in 2004, with the primaries more clustered together, Mellman notes that "Kerry picked up about 20 points nationally from his Iowa win, and another 13 from New Hampshire."

A major reason why national voters passively accept the verdicts from the early states is that they find it difficult to sort out the candidates since they all hail from the same party. Winning Iowa or New Hampshire all but guarantees that a would-be president will be bathed in laudatory media coverage, so voters in the later states have more positive information to shape their choice. A losing candidate (think of Howard Dean in 2004) has to spend most of his time explaining what went wrong. The overriding exception was the one person who, by dint of personality and will, managed to successfully spin defeat as victory. That was, of course, Bill Clinton who declared in 1992 that his second-place finish in New Hampshire made him the "Comeback Kid."

But in 2008 -- with the drama of the caucuses and primaries probably limited to a three-week run -- not even a candidate blessed with the name Clinton would probably have enough time to recover if the news is dire from Iowa, New Hampshire and South Carolina. Instead local newscasters in a place like Tampa would be saying something like this on the eve of the Feb. 5 primary:

"With her campaign in disarray after a series of stinging defeats, Hillary Clinton arrived in the Sunshine State Monday pleading with voters to ignore the pundits and to join her in 'making history.' Bill Clinton, who waved to the crowd at the airport but didn't speak, said earlier in the day in an interview in San Antonio, 'It's a tough race, but Hillary's a great closer.' The New York senator, who is looking for her first primary victory, will have to be a great closer, since she is down by 9 percentage points in the latest statewide poll."

This is not, it should be stressed, a prediction about Hillary's fate, but rather a stark illustration of what all candidates will face on Feb. 5 if they do not pick up a laurel wreath in Iowa or New Hampshire. And campaign money (even as much as $50 million to spend for national primary day) is unlikely to offer much consolation.

The reason? More states will hold primaries on Feb. 5 than were contested in the 2000 or 2004 presidential elections. Against this national backdrop, $50 million (believe it or not) is chump change. In Missouri, one of the lesser states slated to hold a primary on the first Tuesday in February, Claire McCaskill raised $12 million to win a Senate seat in 2006 -- and that does not count the millions more in Democratic Party money that aided her narrow victory. With so much terrain to cover in so short a time, even a Daddy Warbucks presidential candidate would have a difficult time shaping an image through television ads.

Most political insiders agree there is a threshold amount of money needed to compete successfully in Iowa, New Hampshire and South Carolina (plus Nevada on the Democratic side). A reasonable guess would be $40-$50 million, though a candidate with a compelling issue might get away with a bit less. The current leaders in both races (Clinton, Obama and Edwards on the Democratic side, plus McCain, Romney and Rudy Giuliani for the Republicans) can probably all play in this financial arena. The challenge is more daunting for the second-tier candidates in both parties, but with so much money sloshing around campaigns today, the barriers to entry may not be insurmountable.

Since all of politics seems to be an object lesson in the law of unintended consequences, it is worth speculating what might happen if somehow the Feb. 5 primaries offered a mixed verdict in both parties rather than lowering the curtain on the nomination fights. The surviving candidates would then lavish their attention Iowa-style on the remaining primaries. It would be comic if the major victors turned out to be the states that out of lassitude failed to join the rush to the front of the line in order to get the kind of respect that Schwarzenegger demands for California.

Among the primaries on the docket for May are three with venerable political traditions -- Oregon (the site of the first presidential radio debate in 1948), West Virginia (where, by winning the 1960 primary, JFK proved that a Catholic could be elected), and Indiana (where in 1968 Bobby Kennedy came into his own, alas briefly, as a presidential contender). It would be splendid irony if the White House dreamers devoted April (a month without a single scheduled delegate contest) and May to shuttling from Portland to Charleston to Indianapolis, as those places proved that voters who laugh last laugh best.

That is, of course, an unlikely scenario. But it is less bizarre than the notion that -- by moving up their primaries -- voters in California, Texas and Florida will get to see presidential candidates in small intimate settings. For that, in 2008 as always, you have to move to Iowa or New Hampshire.