There are glaring weaknesses and inconsistencies in the president's refusal to allow White House aides to testify under oath. 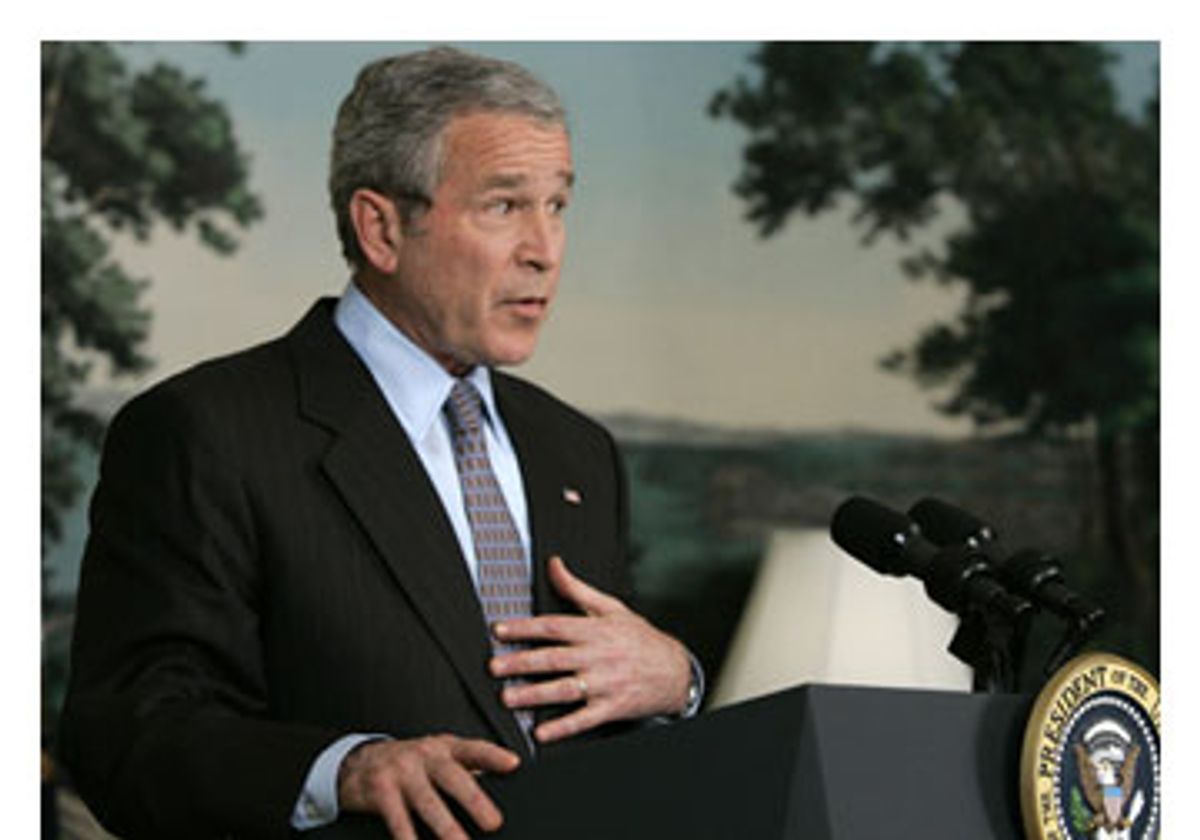 There are several important facts to note about the President's vow at this afternoon's Press Conference to resist attempts to compel Karl Rove and Harriet Miers to testify to Congress, under oath, with regard to the firing of the U.S. attorneys. The President intends to invoke "executive privilege," the same doctrine used by Presidents Nixon and Clinton in their respective (unsuccessful) attempts to resist subpoenas:

First, the President began his Press Conference by admitting that the administration's explanations as to what happened here have been -- to use his own words -- "confusing" and "incomplete." Why, then, would Congress possibly trust Bush officials to provide more explanations in an off-the-record, no-transcript setting where there are no legal consequences from failing to tell the truth?

Once a party demonstrates a propensity to issue false explanations and refuses to tell the truth voluntarily, no rational person would trust that party to make voluntary disclosures. One could trust (if at all) only on-the-record testimony, under oath, where there are criminal penalties for lying (if they have questions about that motivational dynamic, they can ask Lewis Libby).

Second, it is crystal clear (just as it was when Bill Clinton sought to invoke "executive privilege" to resist Grand Jury subpoenas to his aides -- Sidney Blumenthal and Bruce Lindsey and Hillary -- in the Lewinsky investigation) that the narrowly construed doctrine of executive privilege does not entitle the President to shield the communications here from compelled disclosure. When the U.S. Supreme Court in U.S. v. Nixon (1974) rejected Nixon's invocation of that privilege to resist a Grand Jury Subpoena for the Watergate tapes, this is how the Court defined its scope (emphasis added):


The President's need for complete candor and objectivity from advisers calls for great deference from the court. However, when the privilege depends solely on the broad, undifferentiated claim of public interest in the confidentiality of such conversations, a confrontation with other values arises. Absent a claim of need to protect military, diplomatic, or sensitive national security secrets, we find it difficult to accept the argument that even the very important interest in confidentiality of Presidential communications is significantly diminished by production of such material for in camera inspection with all the protection that a district court will be obliged to provide.

Finally, Bush followers are gearing up to solemnly lecture us all on how profoundly vital "executive privilege" is and how terrible it is that Democrats are trying to invade it by demanding that political advisor Karl Rove and Harriet Miers testify under oath. But that, of course, is not what they were saying -- at all -- when Clinton attempted to use that doctrine to prevent the compelled testimony of his aides.

As a side note, I previously thought that the worst and most anger-inducing period of time to research was the late 2002/early 2003 "debate" over whether to invade Iraq, but the trashy filth which spewed forward on a virtually nightly basis during the Lewinskly "scandal" is actually far worse. As but one example, here is how David Shuster led off Tony Snow's Fox program on March 15, 1998:


SHUSTER: Once a reluctant witness, former White House aide Kathleen Willey described to Kenneth Starr's grand jury, and earlier to attorneys for Paula Jones, a 1993 meeting with President Clinton. Willey wanted to discuss a personal crisis with the president. But the encounter, she says, soon became sexual.

"The hug just continued longer than I expected."

Jones attorney Donovan Campbell -- "Was there any kissing involved during that hug?"

"There was an attempt."

"Please describe that as fully as you can."

"He attempted to kiss me."

"Did Mr. Clinton ever seek to take either of your hands and place it on his body any place?"

"He put his hands -- he put my hands on his genitals. I recall him saying he had wanted to do that for a long time."

The total collapse of our political discourse was complete during that period [and, on a related note, I agree entirely with the point Bob Somerby makes here -- even though I don't point it out every single time I mention right-wing deceit -- that the real problem are not the right-wing noise machine and their commentators on Fox per se, but rather, the fact that our national media has been trained to echo their sentiments and follow their lead. Oliver Willis' recording of The Politico's Mike Allen (recently of Time) falling all over himself to please Matt Drudge is an excellent illustration (h/t Atrios)].

In any event, here are some thoughts about "executive privilege" and its heinous truth-suppressing attributes, expressed in 1998 by people who will undoubtedly be defending its grave importance over the next several days:

(HEADLINE: "Executive Privilege is a Dodge")


Evidently, Mr. Clinton wants to shield virtually any communications that take place within the White House compound on the theory that all such talk contributes in some way, shape or form to the continuing success and harmony of an administration. Taken to its logical extreme, that position would make it impossible for citizens to hold a chief executive accountable for anything. He would have a constitutional right to cover up.

Chances are that the courts will hurl such a claim out, but it will take time.

One gets the impression that Team Clinton values its survival more than most people want justice and thus will delay without qualm. But as the clock ticks, the public's faith in Mr. Clinton will ebb away for a simple reason: Most of us want no part of a president who is cynical enough to use the majesty of his office to evade the one thing he is sworn to uphold -- the rule of law.


In our latest Fox News Opinion Dynamics poll, we asked a series of questions about executive privilege. Most believe it's an attempt to stonewall Ken Starr's investigation. There's an even split on whether the White House has something to hide. And a majority thinks conversations with the first lady should not be covered.

Did the president invoke executive privilege to preserve the presidency or hold Ken Starr at bay?


GIGOT: Senator Torricelli, the president has from the very beginning pledged to cooperate with the investigation, said he wants to get the truth out sooner rather than later.


O'BEIRNE: Let me say, Mark, I think Newt Gingrich delivered a really good speech. He gave voice to that which millions of people know to be true. I don't think it's good news for the Democrats. The Republicans have had trouble finding their voice on this and they're scared off by being told it just has to do with the president's personal, private behavior. And Newt Gingrich, I think, has given voice to them in a way that's not helpful to Democrats.

He says there are two principles involved, the public's right to know, because secrecy has so benefited Bill Clinton, and second, no one is above the law. Now, if the public increasingly sees this scandal about their right to know, so much for executive privilege and Secret Service privilege, and no one is above the law, Bill Clinton's in a lot of trouble.


SNOW: Mr. Burton, back to your committee -- if you cannot immunize those witnesses, that's the kiss of death. You're not going to have any more hearings. . . . .

BRIT HUME: And have you been assured, sir, that you will remain as chairman of that committee through the coming months.

GOP COMMITTE CHAIR REP. DAN BURTON: Yes. I have no problem with that, and I don't think the speaker does either.

You know, the president could solve a lot of this problem if he wouldn't hide behind executive privilege, if he'd just come out and tell the American people the truth.

In 1998, when Bill Clinton invoked it, "executive privilege" was a cynical and corrupt tool to prevent Americans from learning the truth about scandal and keep the President above the law. In 2007, now that George Bush has invoked it (and it's hardly the first time, but this time it will likely be tested), it will be a doctrine of the gravest importance and steeped in our most cherished democratic traditions and it must be defended at all costs in order to preserve the Power and Honor of the Presidency.


The Supremes will not have to decide President Clinton's claim of executive privilege to shield his P.R. aide Sidney Blumenthal because when Starr went eyeball-to-eyeball with the White House on this, Clinton blinked. I think the President knew this claim on a matter unrelated to national security was a loser all along, but made it in lower court to run down the clock. Smart; it bought him four months.

For better or worse, not only the right-wing noise machine, but also our nation's media elite, decreed long ago that when "executive privilege" is invoked for anything other than safeguarding national security or other state secrets, it is a corrupt tool designed to stifle The Truth. Here, it is being invoked by Bush to prevent his political advisor and White House counsel -- with no relationship to national security matters -- from testifying as to the reasons why the administration fired 8 U.S. attorneys and then lied about what they did repeatedly.


UPDATE II: Over at Kos, Kagro X has some informed and likely accurate speculation about what is truly motivating the White House in refusing in advance to comply with Congressional Subpoenas (which ought to be imminently forthcoming). Clearly, the U.S. attorneys probe is not the only investigation the White House fears -- and almost certainly is not the one they fear the most.

For that reason, it is important to them to establish principles which will prevent (or at least substantially delay) any meaningful investigations by Congress into the White House's conduct over the last six years, and creating a privileged buffer around key administration officials and White House documents serves that purpose quite well. For that exact reason, it is absolutely imperative that Congress not acquiesce here, because genuine investigations -- that which the country urgently needs -- will, at some point, require this confrontation.


UPDATE III: Jack Balkin highlights a distinction between the Nixon and Clinton cases and the current case that I probably ought to have included in this discussion -- namely, that the Subpoenas which Nixon and Clinton sought to resist were issued as part of a criminal investigation, whereas the forthcoming Subpoenas here are not (but instead are merely Congressional demands for information). Arguably (though far from definitely), the privilege would be given less weight in the context of a criminal proceeding. Countering that, however, is the fact that by voluntarily offering Rove and Miers for "interviews," Bush (as Balkin notes) has likely weakened his own claim of privilege in a way that Nixon and Clinton never did.

Additionally, as Balkin notes, "if Congress were to pressure the President to appoint a special prosecutor (as in the Plame case) to look into allegations of obstruction of justice in the firings, that prosecutor could probably compel testimony before a grand jury." It is the case that there are distinctions between Nixon v. U.S. and this case which the administration will almost certainly cite. Whether those distinctions are meaningful remains to be seen.