Open your Subzeros, people. Balsamic vinegar? Mustard? These and many other foodstuffs do not require refrigeration. 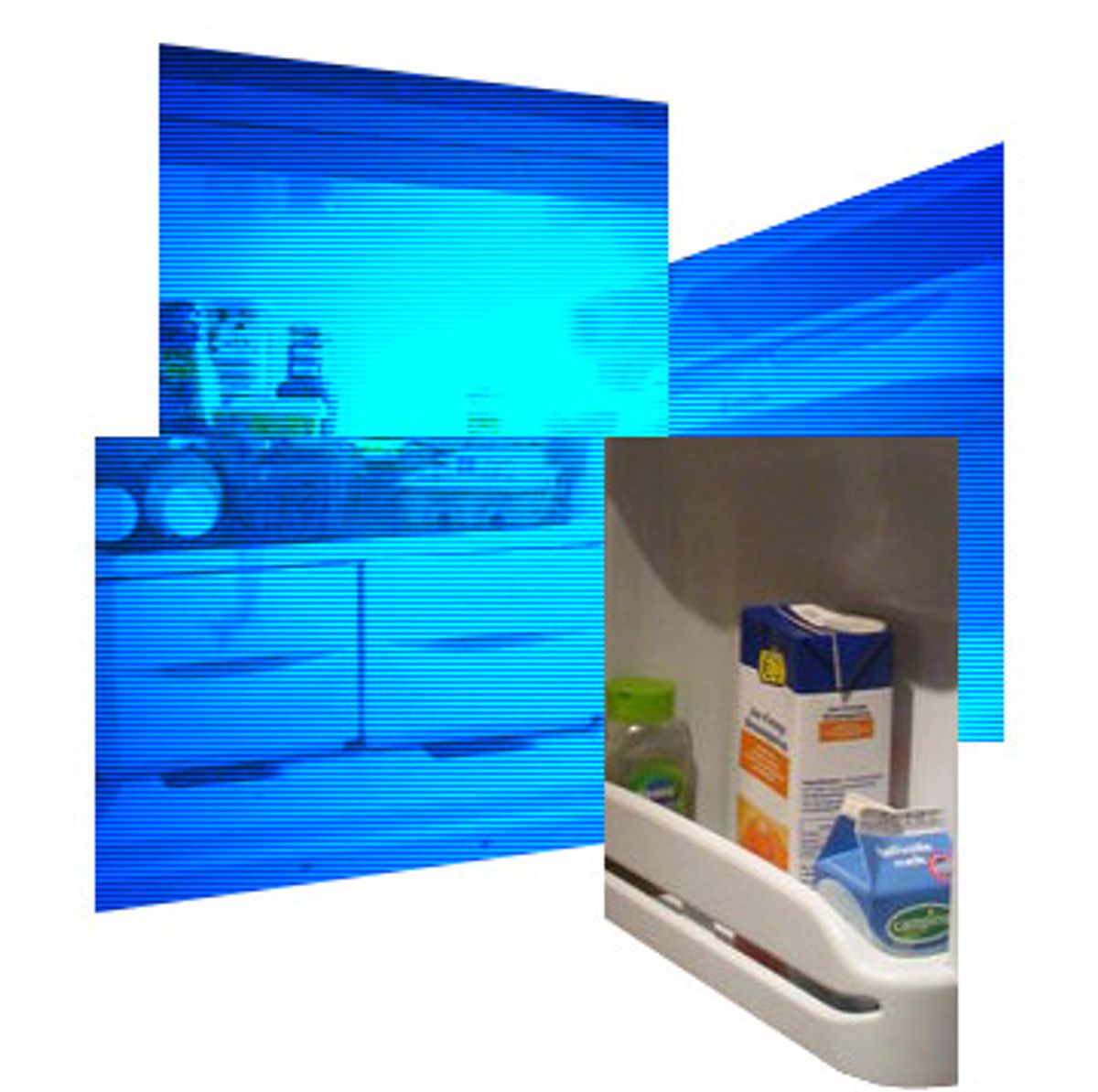 Brillat-Savarin famously said he could tell who you are by what you eat, but that was before the refrigerator was invented. These days the window into the soul is the Subzero door. What you chill can be a gauge of class: Is there more Budweiser than truffle butter? Are the milk and brie organic, or is that a jar of Cheez Whiz right upfront? But if you refrigerate foods with the shelf life of an Egyptian mummy as though they are as perishable as oysters, you are just an average American.

Consider the "Kitchenwise" feature on Ed Koch in the March issue of Saveur, in which the former New York mayor flashes readers glimpses of his canned tuna and balsamic vinegar -- stored not in the cupboard where they belong, but in that cold, dark space meant for his other more perishable staples, like rib steak, taramasalata and salsa. Think about it: In the blackout capital of America, Koch has quarantined his most useful emergency food.

Is it ignorance, obliviousness, marketing or simply our overly electrified, easily panicked American DNA that makes us squander electricity keeping ingredients cold that could survive just fine at room temperature? After all, we do live in an era when even bottled water comes with an expiration date.

I pride myself on living without air conditioning or a dishwasher, but when it comes to compulsive chilling, I know I'm part of the problem. I keep my quart jar of Dijon mustard in the refrigerator door right alongside the mayonnaise, though both could nearly survive nuclear winter out of the box. There is nothing in mustard -- or at least in the common variety made with only dry mustard, vinegar, salt and preservatives -- that can get seriously spoiled. And as I learned while reporting on mayonnaise a few years ago, even Hellmann's is shelf-stable -- the label says "refrigerate after opening" for taste and texture reasons, not because it is the salmon mousse of condiments. (Make a "salad" with salmonella-prone tuna or chicken or eggs, though, and it moves into the risk column.)

I'm equally guilty of storing essentials from Frigidaire-free cuisines in the same door as the Maille and the mayonnaise. There's no reason to keep Chinese garlic-chili paste refrigerated, let alone a tube of harissa, to say nothing of the jar of bacon drippings I hoard for making refried beans. I even keep dry-cured chorizo in the refrigerator, though nothing on the package says to do so, and the Spaniards certainly would not.

My excuse is convenience; when I'm whipping up a vinaigrette, it's easier to reach for mustard on the refrigerator door than it is to get out a stepstool and root around among the 4,000-plus "essential" ingredients in my increasingly globalized cabinets. I also plead experience -- I've learned the hard way that ketchup, a tabletop staple in diners everywhere, must be kept in cold storage because I use it so rarely, whereas a family that lives on French fries and fish sticks could keep it out as long as the greasy spoons do.

In an informal e-survey of roughly 20 friends in six states, some of whom eat for a living, I found the same pattern. A number did know what foods go rancid in the pantry: nut and olive oils in particular (only corn and sesame oils have never turned on me) and fresh peanut butter (salmonella is not the only threat). They knew real maple syrup can go moldy at room temperature, and that true grits, cornmeal, wheat germ and other grains susceptible to spoilage actually benefit from the cold.

Still, all but one refrigerate scores of other ingredients that have no need to contribute to ozone depletion -- and the exception was a what-the-hell cook who says her husband and two sons complain there's never any food in the house. The rest faithfully chill food that could easily line fallout shelter shelves: soy sauce, chili pastes, vinegar (the original preservative), A-1 Sauce (lasts longer than the smoke in the wood in an English pub), molasses (shelf life of sugar), even cocoa (chocolate is vulnerable, but not the virtually fat-free powder). Oddities that turned up on their lists included juniper berries, tamarind concentrate and preserved lemons (note the adjective there?).

Some other cooled peculiarities verged on the realm of too much information: hormone patches, Omega-3 fish oil tablets, nail polish, catnip and aloe vera for sunburns. You would not believe how many people these days keep flaxseed in with their cream (good), not to mention how many have a Sriracha sauce habit (bad -- not the habit but the refrigeration). One friend not only still buys margarine, but stows it in the refrigerator -- even though they will dig that stuff out of a '50s time capsule. Another leaves her butter out at room temperature, as Europeans do. A third is torn about risking it -- the spreadability is superior, but she's nervous -- and a fourth keeps ghee in the refrigerator, when half the point of Indian clarified butter is shelf stability.

Shirley O. Corriher, the author of "CookWise" and a national expert on kitchen science, laughs at the thought of refrigerating so many ingredients, starting with soy sauce and vinegars. But then again, even she refrigerates Tabasco sauce because it is made from chilies that deteriorate and turn brown at room temperature (I guess I burn through mine too fast). Corriher's concern is more for fresh foods, particularly bananas and tomatoes, which are actually damaged by cold storage. But she noted that there is a compelling reason cooks in hot climates like Florida's refrigerate their cornmeal and flour: to keep little bugs from hatching.

According to Corriher, the only reason to refrigerate chutney would be to keep it from losing pungency. And while she said jams and jellies may turn moldy if they're not refrigerated, she added that you can just scrape off the mold and a layer of the condiment underneath and eat fearlessly. (Mold on bread is a different story because the tentacles can bore deep; she advised pitching the whole loaf.)

Asked why so many products that cannot go bad wear the "refrigerate after opening" warning, Corriher said that the fear factor is an element (consider how overheated American homes tend to be). "I think some of it is the producer doesn't want to be sued no matter what," she explained. "But I still can't imagine refrigerating soy sauce."

Neurotic as it is, is there any real harm in compulsive refrigeration? As my very practical upstairs neighbor asked plaintively, "If you have a refrigerator, what difference does it make how much you put in it?" Truth be told, a full refrigerator (or freezer) functions more efficiently than an empty one because there is less space for warm air to enter when the door is opened. But then again, a stuffed one has to work harder, since the air can't circulate.

Worse, needlessly packed refrigerators have ushered in an era of SUV-size kitchen appliances. Devices that were once small iceboxes now commandeer whole walls, and are still growing. (I recently Googled "60-inch refrigerator" and turned up only models that were that wide, not that tall.) Given the shrinking American household and the ballooning American body, do we need these behemoths? Maybe I'm offended because I have a restored 1929 kitchen where the refrigerator fits into only one space, underneath a to-the-ceiling cabinet. That slot is just 5 feet high; even today's trendy pseudo-retro refrigerators tower a good 8 inches above it. If my old one dies, I'm dead.

Only my food editor friend Peggy Grodinsky, exiled from pedestrian New York to sprawling Houston, has been able to offer a convincing defense of excessive refrigeration -- as well as a true window into the enervated American soul: "To go buy a grocery item entails driving to a giant depressing mall, parking, entering a giant depressing supermarket where whatever you want is at least two miles away down an unflatteringly lit aisle, scanning your items yourself at the checkout in a snit of frustration, locating your car in the giant lot and ... then driving home in traffic. Any sane person would compulsively refrigerate just to avoid trips to the store."

Regina Schrambling travels to eat and writes about it for the LA Times and other publications and on her web site, www.gastropoda.com