What Bush is hiding

In the U.S. attorney scandal, Alberto Gonzales gave orders, but he also took them -- from Karl Rove, who plotted to turn the federal criminal justice system into the Republican Holy Office of the Inquisition. 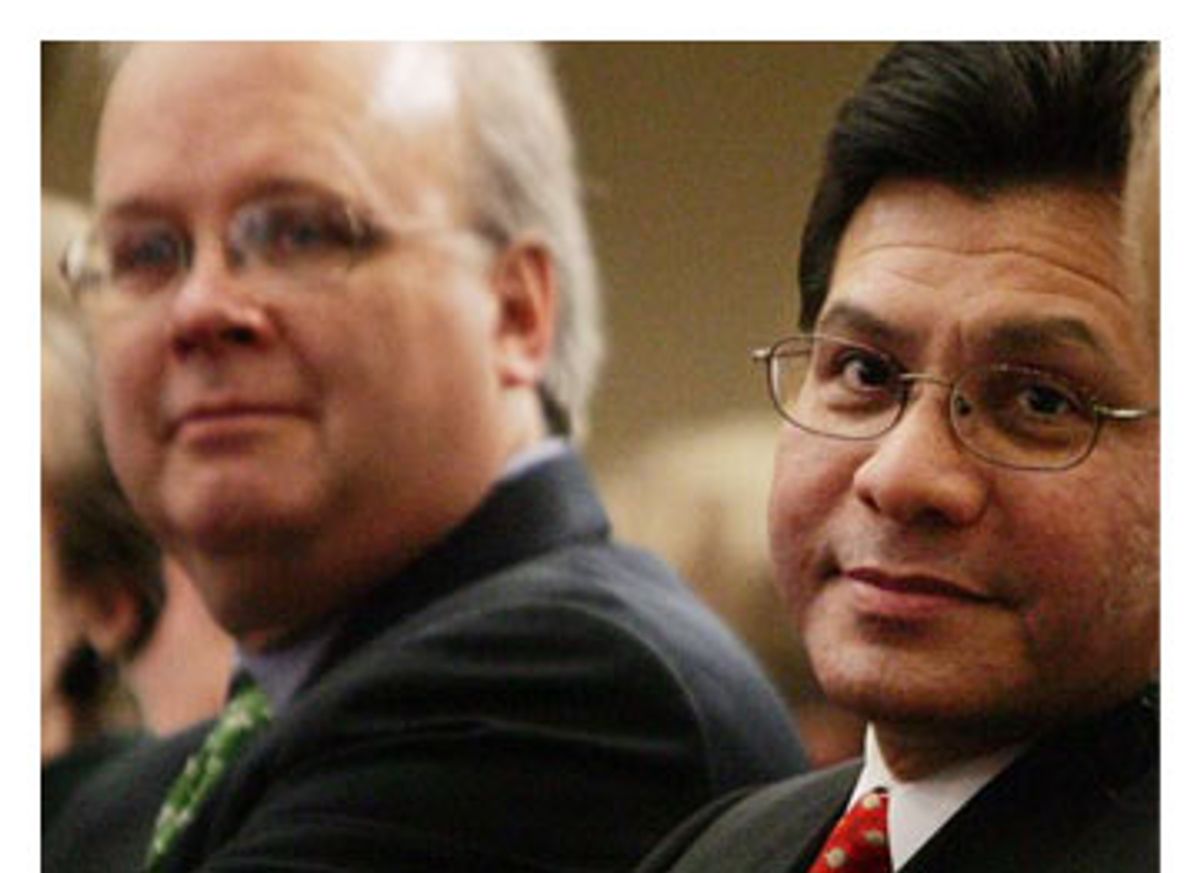 Leave aside the unintentional irony of President Bush asserting executive privilege to shield his aides from testifying before the Congress in the summary firings of eight U.S. attorneys because the precedent would prevent him from receiving "good advice." Leave aside also his denunciation of the Congress for the impertinence of requesting such testimony as "partisan" and "demanding show trials," despite calls from Republicans for the dismissal of Attorney General Alberto Gonzales. Ignore as well Bush's adamant defense of Gonzales.

The man Bush has nicknamed "Fredo," the weak and betraying brother of the Corleone family, is, unlike Fredo, a blind loyalist, and will not be dispatched with a shot to the back of the head in a rowboat on the lake while reciting his Ave Maria. (Is Bush aware that Colin Powell refers to him as "Sonny," after the hothead oldest son?) But saving "Fredo" doesn't explain why Bush is willing to risk a constitutional crisis. Why is Bush going to the mattresses against the Congress? What doesn't he want known?

In the U.S. attorneys scandal, Gonzales was an active though second-level perpetrator. While he gave orders, he also took orders. Just as his chief of staff, Kyle Sampson, has resigned as a fall guy, so Gonzales would be yet another fall guy if he were to resign. He was assigned responsibility for the purge of U.S. attorneys but did not conceive it. The plot to transform the U.S. attorneys and ipso facto the federal criminal justice system into the Republican Holy Office of the Inquisition had its origin in Karl Rove's fertile mind.

Just after Bush's reelection and before his second inauguration, as his administration's hubris was running at high tide, Rove dropped by the White House legal counsel's office to check on the plan for the purge. An internal e-mail, dated Jan. 6, 2005, and circulated within that office, quoted Rove as asking "how we planned to proceed regarding the U.S. attorneys, whether we are going to allow all to stay, request resignations from all and accept only some of them, or selectively replace them, etc." Three days later, Sampson, in an e-mail, "Re: Question from Karl Rove," wrote: "As an operational matter we would like to replace 15-20 percent of the current U.S. attorneys -- the underperforming ones ...The vast majority of U.S. attorneys, 80-85 percent I would guess, are doing a great job, are loyal Bushies, etc., etc."

The disclosure of the e-mails establishing Rove's centrality suggests not only the political chain of command but also the hierarchy of coverup. Bush protects Gonzales in order to protect those who gave Gonzales his marching orders -- Rove and Bush himself.

"Now, we're at a point where people want to play politics with it," Rove declared on March 15 in a speech at Troy University in Alabama. The scene of Rove's self-dramatization as a victim of "politics" recalls nothing so much as Oscar Wilde's remark about Dickens' "Old Curiosity Shop": "One must have a heart of stone to read the death of little Nell without laughing."

From his method acting against "politics," Rove went on to his next, more banal talking point: There can be no scandal because everyone's guilty. (This is a variation of the old "it didn't start with Watergate" defense.) "I would simply ask that everybody who's playing politics with this, be asked to comment on what they think of the removal of 123 U.S. attorneys during the previous administration and see if they had the same, superheated political rhetoric then that they've having now." Instantly, this Rove talking point echoed out the squawk boxes of conservative talk radio and through the parrot jungle of the Washington press corps.

Indeed, Presidents Clinton, George H.W. Bush and Reagan replaced the 93 U.S. attorneys at the beginning of their administration as part of the normal turnover involved in the alternation of power. A report issued on Feb. 22 from the Congressional Research Service revealed that between 1981 and 2006, only five of the 486 U.S. attorneys failed to finish their four-year terms, and none were fired for political reasons. Only three were fired for questionable behavior, including one on "accusations that he bit a topless dancer on the arm during a visit to an adult club after losing a big drug case." In brief, Bush's firings were unprecedented, and Rove's talking point was simply one among several shifting explanations, starting with the initial false talking point that those dismissed suffered from "low performance."

"Administration has determined to ask some underperforming USAs to move on," wrote Sampson in a Dec. 5, 2006, e-mail to associate attorney general Bill Mercer. Yet the Associated Press reported on Tuesday, March 20: "Six of the eight U.S. attorneys fired by the Justice Department ranked in the top third among their peers for the number of prosecutions filed last year, according to an analysis of federal records. In addition, five of the eight were among the government's top performers in winning convictions."

When the scandal first broke, Rove personally offered a talking point on one of those fired, claiming on March 8 that the U.S. attorney for San Diego, Carol Lam, "refused to file immigration cases ... at the direction of the Attorney General, she was asked to file, and she said I don't want to make that a priority in my office." Though there was pressure on Lam to pursue more immigration cases, a heated issue for Republicans, three months before she was dismissed, the Justice Department had sent a letter to Sen. Dianne Feinstein, D-Calif., noting that Lam's office had devoted "fully half of its Assistant U.S. Attorneys to prosecute criminal immigration cases."

Nor was the U.S. attorney for Washington state, John McKay, dismissed for "low performance." On Aug. 9, 2006, Sampson recommended him for a federal judgeship, writing in an e-mail: "re: John, it's highly unlikely that we could do better in Seattle." Yet, less than a month later, on Sept. 13, Sampson placed McKay on a list titled: "[U.S. Attorneys] We Now Should Consider Pushing Out." McKay was removed from favored status, according to his own sworn testimony before the Congress, because of his refusal to prosecute Democrats on nonexistent charges of voter fraud after the Democratic candidate for governor won by a razor-thin margin in 2004. McKay said he received telephone calls from Ed Cassidy, chief of staff to Rep. Doc Hastings, R-Wash., and state Republican Party chairman Chris Vance pressuring him to open a probe. Now, McKay has called for a special prosecutor to investigate the firings.

McKay's case parallels that of David Iglesias. As Iglesias wrote in the New York Times in an article titled "Why I Was Fired": "Politics entered my life with two phone calls that I received last fall, just before the November election. One came from Representative Heather Wilson and the other from Senator [Pete] Domenici, both Republicans from my state, New Mexico. Ms. Wilson asked me about sealed indictments pertaining to a politically charged corruption case widely reported in the news media involving local Democrats. Her question instantly put me on guard. Prosecutors may not legally talk about indictments, so I was evasive. Shortly after speaking to Ms. Wilson, I received a call from Senator Domenici at my home. The senator wanted to know whether I was going to file corruption charges -- the cases Ms. Wilson had been asking about -- before November. When I told him that I didn't think so, he said, 'I am very sorry to hear that,' and the line went dead. A few weeks after those phone calls, my name was added to a list of United States attorneys who would be asked to resign -- even though I had excellent office evaluations, the biggest political corruption prosecutions in New Mexico history, a record number of overall prosecutions and a 95 percent conviction rate."

Domenici and Wilson have both hired lawyers, given that they could potentially face prosecution for obstruction of justice. Their possible legal vulnerability and that of other Republicans across the country suggests a major reason why Bush is fighting to keep Rove from testifying before the Congress under oath.

McKay's and Iglesias' cases, as they explain them, involve efforts to pressure U.S. attorneys to launch investigations solely for political motives. The U.S. attorneys decided that evidence was lacking for such probes, and they were accordingly punished. Meanwhile, four of those fired were guilty of offenses of commission, not omission, having begun legitimate public corruption investigations of Republican officials.

Lam, who had successfully prosecuted Rep. Randy "Duke" Cunningham, was following the trail by investigating his associates, defense contractor and Republican fundraiser Brent Wilkes, and Wilkes' best friend, Dusty Foggo, the No. 3 ranking official at the CIA, the chief of contracting; and Rep. Jerry Lewis, a California Republican.

Daniel Bogden, the U.S. attorney for Nevada, was investigating whether Gov. Jim Gibbons "accepted unreported gifts or payments from a company that was awarded secret military contracts when Mr. Gibbons served in Congress," according to the Wall Street Journal.

H.E. "Bud" Cummins, the U.S. attorney for Arkansas, was investigating conflict-of-interest corruption involving state contracts that Missouri governor Matt Blunt granted to Republican contributors. In October 2006, Cummins announced he would not seek indictments. But his statement just came four weeks before the election for the U.S. Senate seat in Missouri that the Democratic candidate, Claire McCaskill, won narrowly. Cummins told the Los Angeles Times, "You have to firewall politics out of the Department of Justice. Because once it gets in, people question every decision you make. Now I keep asking myself: 'What about the Blunt deal?'"

Paul Charlton, the U.S. attorney for Arizona, was investigating Rep. Rick Renzi, R-Ariz., for allegedly corrupt land deals and introducing legislation to benefit a major campaign contributor. Charlton was curiously accused of not filing obscenity cases, which, in fact, he did pursue.

In each of these public corruption cases, it is reasonable to assume that the relevant Republican political figures either themselves complained or complained through surrogates about the U.S. attorneys to Rove, the matrix of national GOP politics. But which officials -- instead of foolishly making direct calls to the U.S. attorney, like Domenici and Wilson -- went through Rove to stymie the investigations (or rush them, if they were targeting Democrats)? Then, what did Rove say about the individual U.S. attorneys to the White House Office of Legal Counsel and officials in the Justice Department?

Bush's resistance to having Rove placed under oath or even having a transcript of his testimony appears to be a coverup of a series of obstructions of justice. The e-mails hint at the quickening pulse of communications between the White House and the Justice Department. But only sworn testimony can elicit the truth.

On Wednesday, the House Judiciary Committee issued five subpoenas, including one for Rove, and on Thursday the Senate Judiciary Committee plans to follow suit. With these subpoenas, a constitutional battle is joined. "The moment subpoenas are issued, it means that they have rejected the offer," said White House press secretary Tony Snow. Bush is barricading his White House against the Congress to prevent its members from posing the pertinent question that might open the floodgate: What did Karl Rove know, and when did he know it?