MoveOn moves in with Pelosi

The netroots group's support proved crucial to passage of the Democrats' Iraq spending plan. But antiwar activists say MoveOn has been co-opted by its access to power. 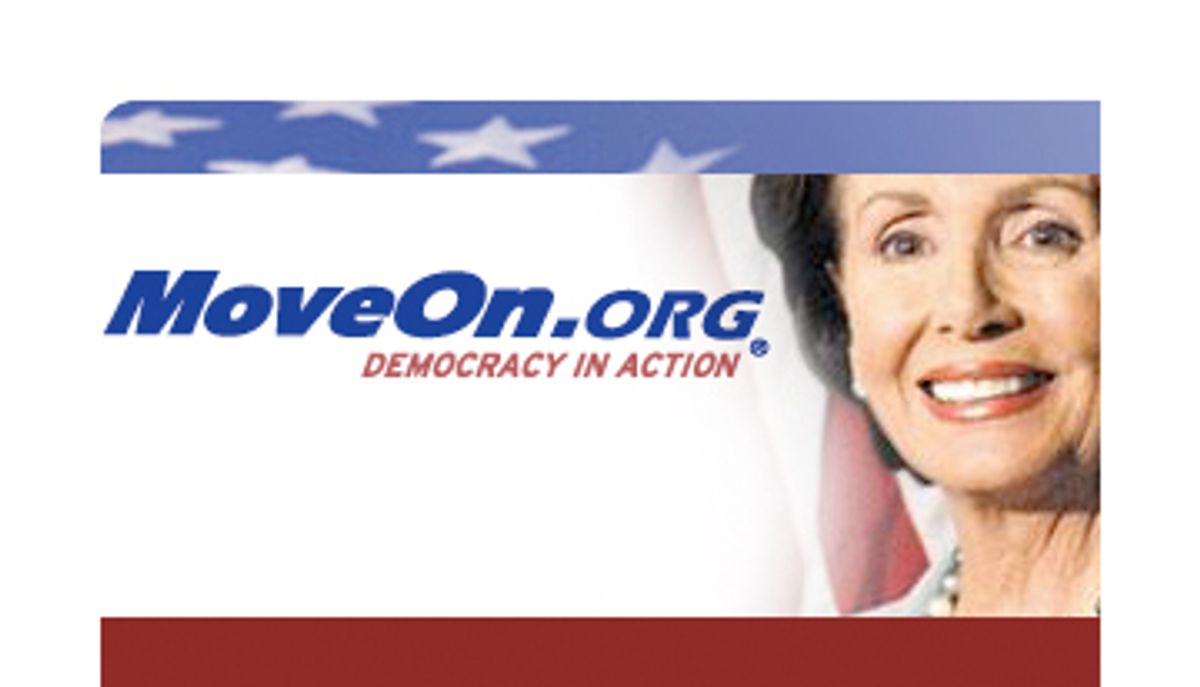 When Eli Pariser, the executive director of MoveOn.org, looks at the Iraq spending bill that Nancy Pelosi and other Democratic leaders managed to pass in the House today, what he sees is a way to end the war. The bill, which won passage on a nearly strict party-line vote, commits $124 billion to fund operations in Iraq, but it calls for removal of American combat troops by the summer of 2008. The plan is not perfect, Pariser concedes. It does not require complete withdrawal. Still, this week, MoveOn signed on to Pelosi's supplemental funding bill, citing a poll of its members showing overwhelming support of the idea.

MoveOn's longtime allies in the antiwar movement, however, look at the bill -- and MoveOn's support for it -- and see something very different. Groups who call for immediate withdrawal argue that MoveOn's position is a betrayal of their cause, and that Pelosi's bill merely continues the war while allowing Democrats to say they've done something to oppose it. Cindy Sheehan, the "peace mom" who favors immediate withdrawal, describes MoveOn as supporting "the slow-bleed strategy of the Democratic leadership." Gail Murphy, of the group CodePink, says, "MoveOn has taken a compromised position -- in fact I think they were involved behind the scenes in creating a compromised position." Other peace activists call MoveOn's e-mail poll of its membership a sham. If MoveOn's millions of members knew the full details of the bill, they would surely oppose it.

MoveOn, which began with an e-mail petition opposing President Clinton's impeachment in 1998, has grown into one of the biggest and best-known netroots groups on the left. When Republicans controlled the White House and the Congress, it raised millions of dollars in soft money for insurgent liberal candidates and produced memorable commercials blasting President Bush. Now, however, with the Democrats running the House and Senate, MoveOn's stance on the Pelosi bill has led critics to suggest complicity with the new congressional power structure. MoveOn has settled for something less than ideal. It's the classic problem the outsider faces after getting inside: Now that it's got an in with the speaker of the House, has MoveOn lost its soul?

It's true that Pariser, a 26-year-old who has worked for MoveOn since 2001, looks at the Iraq supplemental bill with a shrewdly pragmatic eye. Of all the Iraq plans discussed in Congress this week -- including one by liberal members calling for a quicker, complete withdrawal -- Pariser saw Pelosi's bill as the left's best chance. He saw it as the only one that could plausibly pass. And Pariser argues that its passage will help end the war. "Let's play this out," he says. "Congress passes a supplemental with a timeline attached and Bush is forced to veto it. That forces the Republicans to choose between an increasingly isolated president and the majority of the Congress and the majority of the American people." The bill is thus a starting point for future efforts. It builds legislative support, Pariser says, for an eventual congressional mandate to withdraw.

MoveOn has long been part of Win Without War, a large collection of progressive antiwar groups; now it is virtually alone among the coalition's membership in its support for the Pelosi plan. Sheehan says that some in the antiwar movement were so upset at MoveOn's position this week that they spent a couple of days drawing up full-page newspaper ads accusing the group of betraying its members. (In the end they decided to hold their fire, at least for now.)

But whatever the mainstream impression of MoveOn may be, it has never been a lockstep member of the idealistic, activist left. It may have seemed that way during the years of one-party GOP rule, when MoveOn and other progressive groups fought a common enemy. But the real story here goes back to an earlier age; MoveOn has always had a more pragmatic agenda than its lefty brothers. The group was founded to solve a political impasse in a practical way: When Berkeley software developers Joan Blades and Wes Boyd drafted their online petition calling for Congress not to impeach Bill Clinton, they were suggesting that it censure him instead, so that the nation could "move on" to other business. Not exactly a very lefty position.

MoveOn is now one of the largest activist groups in the country, but its popularity is more a consequence of its organizational savvy than any pie-in-the-sky plans. Peace groups believe in the grand possibilities of the firm, principled stand. But MoveOn has never had much truck with idealists. For Pariser, the bottom line on Iraq is the vote count. "If we could tell all of the Democrats plus the number of Republicans we'd need to survive a veto to end the war, we would," he says. "But getting that level of support for ending the war -- it sucks, it's terrible that so many politicians in Washington are out of step with where people are, but it's the case. And so we've got to make it hurt for them to support a continued war."

What precipitated the recent scuffle between MoveOn and its former allies was an e-mail that Pariser sent to MoveOn's members on Sunday, March 18, asking them to help guide the group's position on the war debate in Congress. As Salon's Michael Scherer has noted, the e-mail read like a push poll; Pariser described Pelosi's plan and Bush's opposition to it, and made only cursory mention of progressives' concerns. He did not describe plans floated by members of the House's Out of Iraq Caucus that would have funded a quick withdrawal from Iraq. "Should we support or oppose the Democrats' plan?" Pariser asked in the e-mail. Slightly more than a hundred thousand MoveOn members voted in the poll. The vast majority -- 84.6 percent -- sided with "the Democrats."

"It reads like a Soviet ballot," says John Stauber, the founder of the Center for Media & Democracy, whose harsh indictment of MoveOn's survey has been a hot item on lefty blogs this week. If Pariser had more thoroughly educated members about all of the positions in the debate, many would have voted against the Pelosi plan, Stauber says. More important, MoveOn could have helped the chances of an amendment by Reps. Barbara Lee, Maxine Waters and Lynn Woolsey, leaders of the Out of Iraq Caucus, that called for withdrawal of all troops by the end of 2007. "They could have put out an alert to 3.2 million people across the country and said, 'If you do anything tomorrow, get up and call your representatives and tell them to support the Lee Amendment,'" insists CodePink's Gail Murphy. "They've got millions of dollars. If they put their money toward stopping this war, we'd have a lot more leadership in the Democratic Congress toward stopping this war." But MoveOn didn't stump for the Lee plan, and it died in committee.

Pariser defends his e-mail. He says that the group already knew that its members would have supported Barbara Lee's plan, but whatever MoveOn did, it would never have passed. What MoveOn didn't know was what its members thought about the Pelosi plan. "The choice that we needed to make as an organization was, Do we support this thing or not?" Pariser says. "And so I think the e-mail was a very fair presentation of the choice that was actually in front of the organization."

Pariser also says that his critics have confused MoveOn's policies with its political strategy -- they've confused what MoveOn wants with MoveOn's efforts to get there. What the group wants, he says, is what everyone in the peace camp wants: withdrawal as fast as possible. But there is no clear political path to immediate withdrawal. "Unfortunately we're living in a world where in order for anything to happen on Iraq that forces the president's hand, were going to need two thirds of Congress." MoveOn's strategy arises out of this parliamentary consideration; its goal is now legislative, to build toward two-thirds support in Congress.

Pariser has previously drawn a sharp distinction between MoveOn and the Democratic Party. In 2005, he told Salon's Tim Grieve that "the job of a party is to get elected and the job of a movement is to promote ideas and an ideology," and that "we're definitely on the movement side of the equation. We don't want to be the party." People in the peace camp, though, say that MoveOn has lately found a special place in the Democratic leadership structure. It's the safe antiwar group. Members of Congress can meet with MoveOn because they're sure it won't call for something too far out. Other organizations have been shut out. Gail Murphy, of CodePink, is on the steering committee of United for Peace and Justice, which represents 1,400 peace groups. "We've asked for meetings with Pelosi," she says. "We were never approached to sit down and have a conversation."

Pariser is skeptical of the idea that MoveOn has much power with Democratic leaders. "I wouldn't be over-grandiose about our influence with Nancy Pelosi," he says. "We're still a group of outsiders trying to create change in Washington, D.C." He concedes that some members of Congress considered MoveOn's support important, and as a result, he says, the group held out to provide it in order to get a better bill. And they saw results. "This wasn't due only to us," he says, "but in those two weeks the timetable was added to the bill."

MoveOn's imprimatur has certainly given many Democrats cover to vote for the Pelosi bill. And this is really the main criticism people in the peace camp level at MoveOn. "The leadership wants to say, 'Hey look, everyone voted for an antiwar bill," Stauber says. "So I think the peace movement is being hijacked and rerouted to serve a Democratic leadership and the 2008 political agenda." But Stauber believes the effort won't work; most of MoveOn's members, he notes, didn't even vote in Pariser's poll. "They've grown so blas&eacaute; about MoveOn's appeals that they don't even bother to open their e-mail," he says. And when MoveOn can't reach people by e-mail, what can it do?

Pariser disagrees; he thinks MoveOn members really got the substance of the debate at hand, and that they do agree with the group's stance. "Our members aren't stupid," he says, "and they responded in a serious and thoughtful way to the political question of whether this incremental step to isolate the president and the people who oppose a timeline is worth supporting."