President Bush's "offer" to let Congress interview Karl Rove about the U.S. attorney firings without an oath is a joke. As we learned in Plamegate, Rove cannot be trusted to tell the truth. 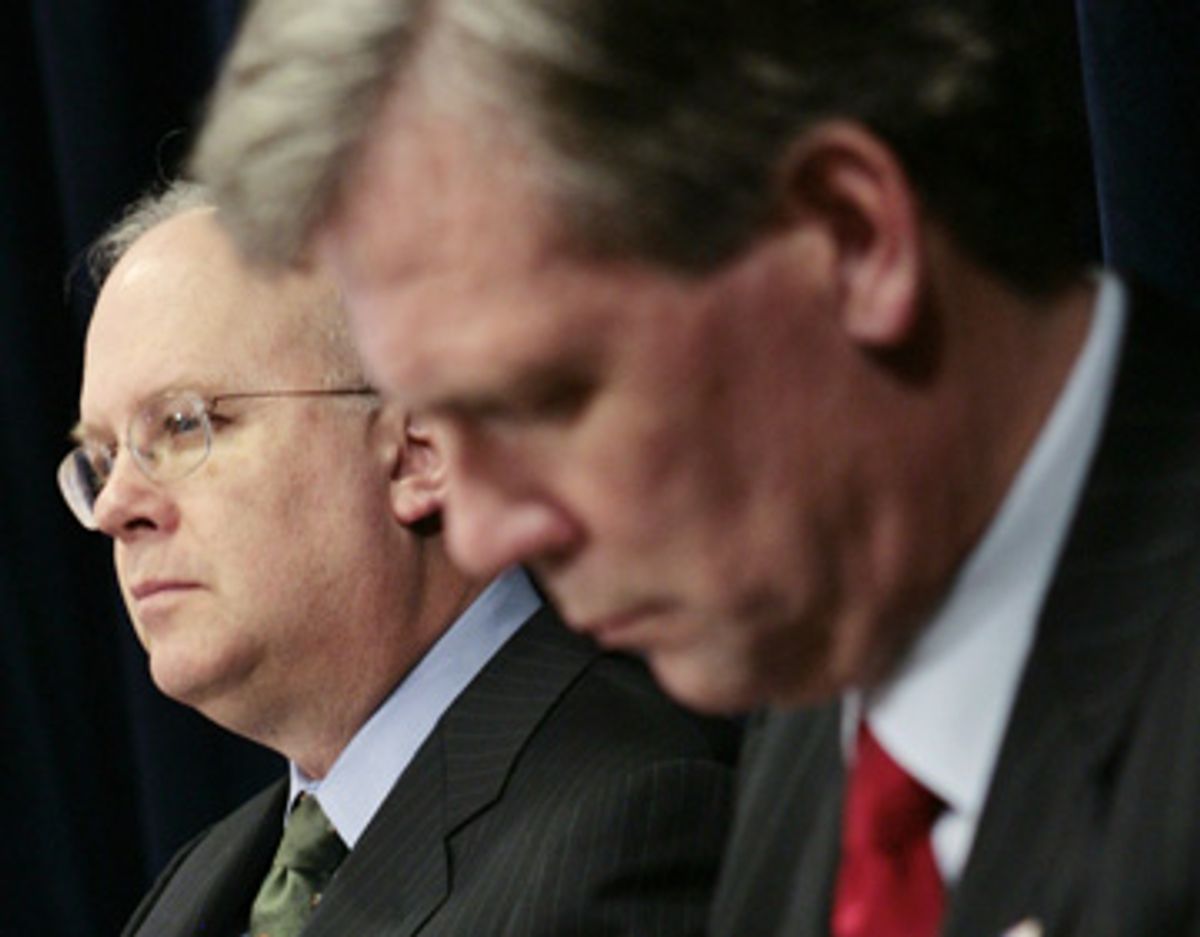 Confronted with subpoenas from Congress demanding the sworn testimony of Karl Rove on the matter of the eight fired U.S. attorneys, those guileless guys in the Bush White House sound puzzled. Both press secretary Tony Snow and communications director Dan Bartlett say they cannot understand why the House and Senate Judiciary Committees won't accept the offer to interview Rove in private, behind closed doors, without putting him under oath or transcribing the proceedings.

If the Congress is honestly interested in the truth about those firings, as Snow exclaimed yesterday under questioning from reporters, why wouldn't the committees agree to that "extraordinarily generous" proposal from the White House? Why not just let ol' Karl sit down in a back room with a few senators and members of Congress and explain everything, without stenographers and reporters and videotapes and nosy rubbernecking citizens?

The proposal to interview the president's chief political counselor without an oath or even a transcript is absurd for a simple and obvious reason. Yet the White House press corps, despite a long and sometimes testy series of exchanges with Snow, is too polite to mention that reason, so let me spell it out as rudely as necessary right here:

Rove is a proven liar who cannot be trusted to tell the truth even when he is under oath, unless and until he is directly threatened with the prospect of prison time. Or has everyone suddenly forgotten his exceedingly narrow escape from criminal indictment for perjury and false statements in the Valerie Plame Wilson investigation? Only after four visits to the grand jury convened by special counsel Patrick Fitzgerald, and a stark warning from Fitzgerald to defense counsel of a possible indictment, did Rove suddenly remember his role in the exposure of Plame as a CIA agent.

Not only did Rove lie, but he happily let others lie on his behalf, beginning in September 2003, when Scott McClellan, then the White House press secretary, publicly exonerated him of any blame in the outing of Plame. From that autumn until his fifth and final appearance before the grand jury in April 2006, the president's "boy genius" concealed the facts about his leak of Plame's CIA identity to Time magazine correspondent Matt Cooper.

There is no reason to believe that Rove would ever have told the truth if Fitzgerald had not forced Cooper to testify before the grand jury and surrender his incriminating notes, with a contempt citation and the threat of a long sojourn in jail. Indeed, there is no reason to think that even knowing Cooper had testified would have made Rove testify accurately. He failed to do so from July 2005 until April 2006, after all. But in December 2005, Fitzgerald impaneled a new grand jury and started to present evidence against him.

In the embarrassing aftermath of that very plain history of lying, covering up and gaming the prosecutor, Rove's friends offered two cute explanations. Explanation one was that he supposedly didn't remember that he had spoken about Plame with Cooper until Time reporter Viveca Novak reminded his attorney of that fact. Explanation two was that he didn't say Plame's name aloud to Cooper but merely referred to her as Wilson's wife and said she worked at CIA. So technically, when he claimed he didn't name her, he wasn't literally lying. Except that he didn't remember doing any of that anyway. What-ever!

By now the porous brainpans of the Washington press corps not only seem to have excused Rove's leaking and lying about Plame's CIA position, but also to have erased that disgraceful episode from their memories. The president and all his flacks can stand before the public and act as if Rove should be treated like a truthful person whose words can be believed -- and not as someone who lies routinely even in the direst of circumstances. The press secretary Snow can say, without fear of contradiction, that the best way to ascertain the facts about the White House role in the firing of the U.S. attorneys is to interview Rove without benefit of oath or transcript.

Why didn't everybody laugh when he said that?