Many presidents have lived with the ill health of loved ones. Can we stop asking John Edwards when he's dropping out of the presidential race? 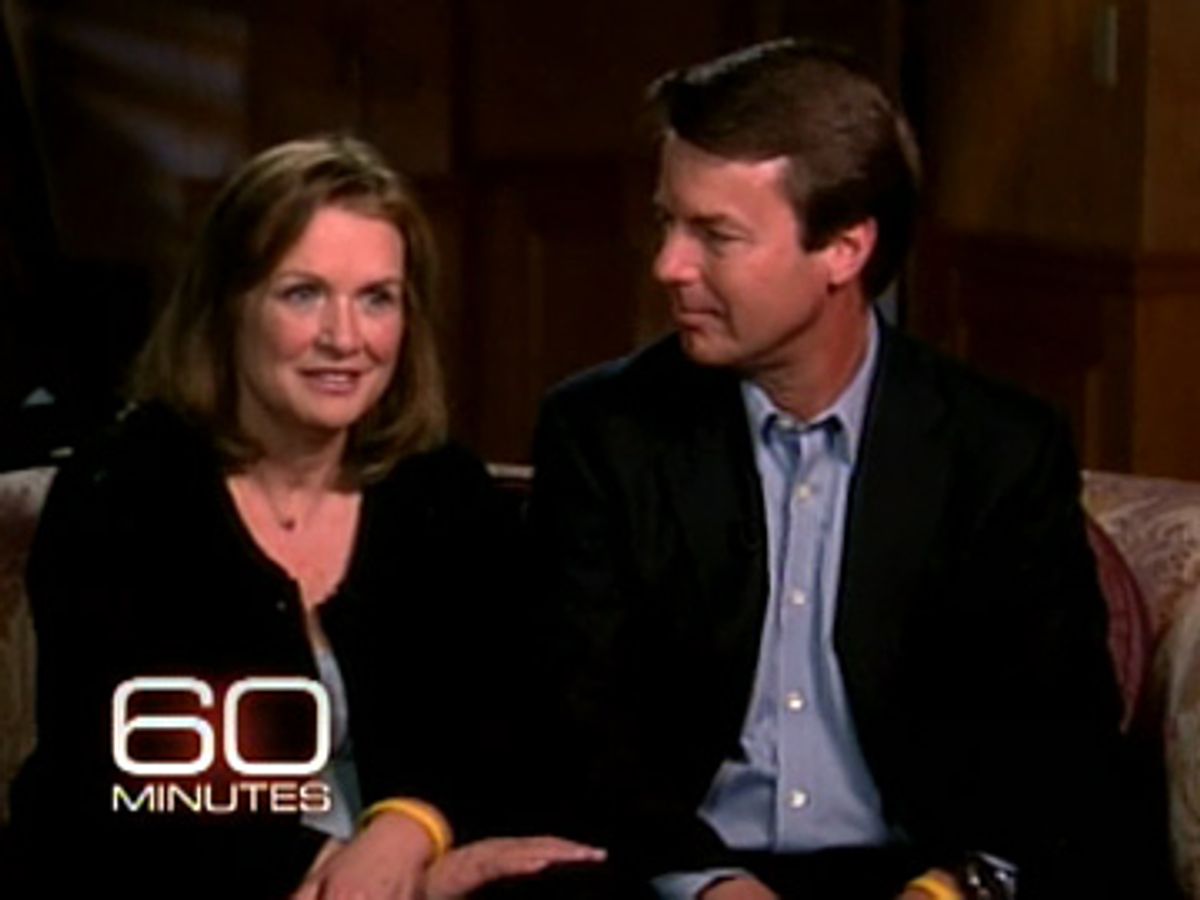 What made the comeback so withering was that it was delivered in such a matter-of-fact tone.

During a "60 Minutes" interview Sunday night, Katie Couric kept hectoring John and Elizabeth Edwards about their stubbornness in the face of cancer. Again and again, without getting the response she wanted, Couric asked them why they hadn't yielded to the return of Elizabeth's illness and broadly hinted that they should have called off John's campaign for the presidency. Finally, almost in exasperation, Couric turned to Elizabeth and said bluntly, "Here you're staring at possible death..." Elizabeth interrupted Couric with this cut-to-the-chase response: "Aren't we all, though?"

Left unsaid was that Couric's husband had died from colon cancer in 1998 -- and the perky anchor kept appearing on the "Today" show till the last week of his life. Left unsaid was that legendary newsman Ed Bradley, who died of leukemia last year, was contributing to "60 Minutes" until the very end.

Embedded in Couric's smarmy comment was the implication that any public figure afflicted with an incurable disease has an obligation to climb on an ice floe and sail off to oblivion so that TV viewers in the prized 18-to-35-year-old demographic do not have to acknowledge their own mortality. Or that, at least, Elizabeth Edwards, whose breast cancer has recurred, owes it to the world to spend her remaining years offstage with their two small children, Emma Claire, 8, and 6-year-old Jack.

It will be weeks, perhaps months, before we begin to get an accurate measure of the political ramifications of Elizabeth Edwards' health. The issues raised by the candor and determination she and her husband have shown are too unprecedented to be unraveled by instant polls or interviews with oft-quoted political experts.

One theory is that voters crave presidential candidates with unblemished medical charts and problem-free lives, whose emotional burdens rival those of the contestants on "America's Next Top Model." That would rule out all three Republican front-runners, since John McCain and Rudy Giuliani have had their own brushes with cancer and Mitt Romney's wife suffers from multiple sclerosis. Another theory is that Elizabeth Edwards has touched something deep in the American psyche and pretty soon we will see supportive bumper stickers that read, "I Know Someone with Cancer -- and I Vote."

Voters and campaign contributors will, of course, offer the final verdict on the Edwards campaign. But so far the public arguments raised against the former North Carolina senator's continuing his presidential campaign, with his wife's fervent participation, are flimsy.

Channeling chat-room busybodies, Couric hit the Edwardses with the Bad-Parent Question -- how could they justify being on the campaign trail away from Emma Claire and Jack at this critical time? In an ideal world, Elizabeth Edwards would have demonstrated that she is a caring mother by not getting cancer. Short of that, any decision that the family makes would not entirely shield the children from the troubling shadow of their mother's illness. Besides, running for office doesn't mean the Edwardses have to be away from their children. During the 2004 race for the presidential nomination they included the kids in their campaign rambles, turning bus trips through the early caucus and primary states into family adventures. I was on the Edwards campaign bus when a puzzled Emma Claire asked her father, "Daddy, what's a fundraiser?"

During the "60 Minutes" interview, Elizabeth Edwards said that she and her husband "have been contemplating all the different ways that we can make certain that [the children] are with us as much as possible." Home schooling -- which would have an undeniable crossover political appeal to conservative voters -- might be one solution. Before long, Emma Claire and Jack would certainly be testing far above their grade level in such essential subjects as the geography of Iowa, the history of the New Hampshire primary and the arithmetic of vote counting.

On the surface, a far more substantive concern is that Edwards would find it difficult to function as president if Elizabeth's health dramatically deteriorated. In truth, however, people become president at a time in their lives when fate inevitably requires them to face up to health crises and the death of the people they love. Unless they amend the Constitution to allow callow 17-year-olds to run, this will always be a major risk in electing a president.

During a few short months at the start of his presidential candidacy, John Kerry endured the death of his mother and surgery for prostate cancer. In 1994, with Bosnia in flames and healthcare reform headed for a cliff, Bill Clinton had to confront the death of the most pivotal figure in his life, his mother, Virginia Kelley. As soon as Clinton left the funeral in Arkansas, he flew to Brussels for a NATO summit.

Being distracted by personal life is part of the terrible burden of the presidency. Both Nancy Reagan and Betty Ford were diagnosed with breast cancer while their husbands were in the White House. In her autobiography, "The Times of My Life," Betty Ford writes about her first night in the hospital for a mastectomy, "Jerry says he's never been so lonely as he was going home to the White House that night. He was more upset than I."

But many of these human details have been airbrushed out of remembered history. No one links the death of Clinton's mother to the way that his presidency almost fell apart in 1994, climaxing with the Gingrich Revolution. No one connects Kerry's personal travails with his maladroit presidential campaign. Betty Ford is remembered for her honesty at a time when breast cancer was a taboo topic, but Gerald Ford is remembered for pardoning Nixon.

Presidential races are often about more than control of the levers of power and the policy direction of the nation. Prior campaigns forced the nation to confront questions about religion, divorce and career-minded first ladies. This time around, especially for the Democrats, everything is on the table: race (Barack Obama), gender (Hillary Clinton), Hispanic heritage (Bill Richardson) and now cancer (the Edwardses). In an election cycle in which the Democrats are poised to surmount age-old political prejudices, outmoded views about the proper conduct of people with cancer deserve to be jettisoned, whether or not John Edwards ever makes it to the White House.