This Will Ferrell comedy skates along the thin line between parody and homophobia. 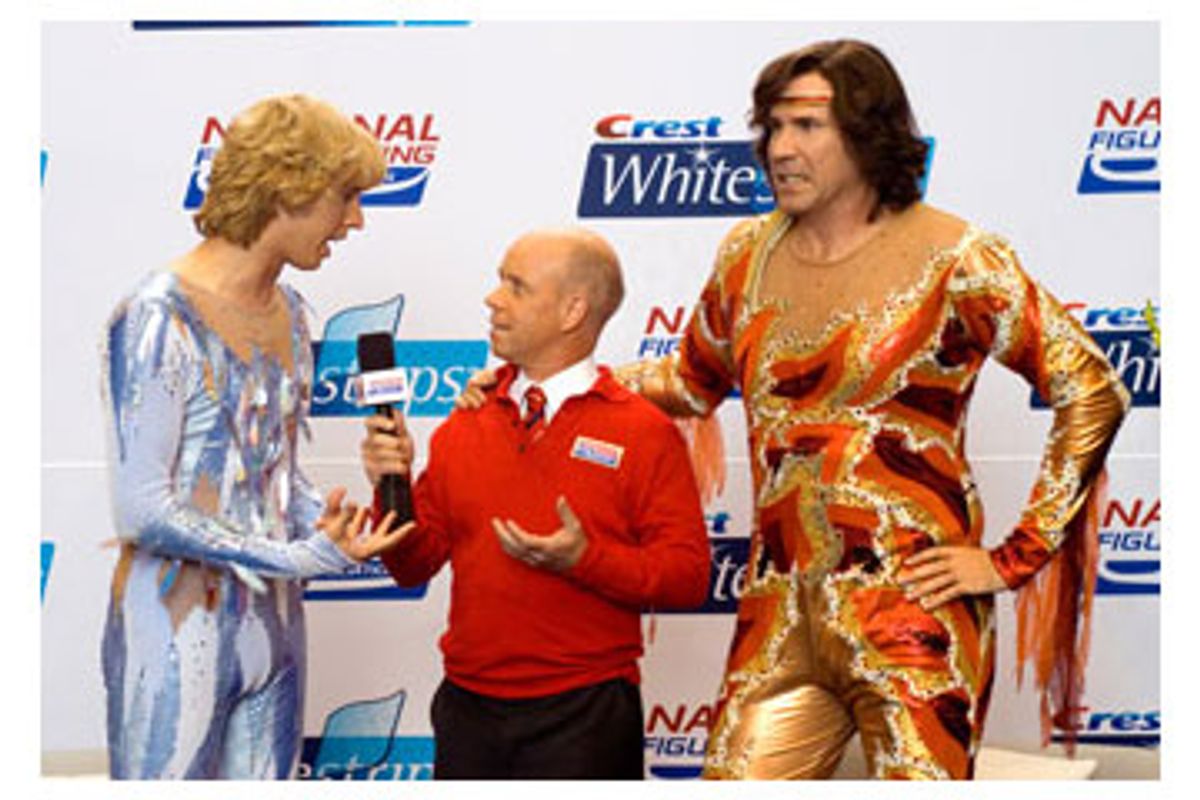 If the idea of men in slick spandex unitards is automatically funny to you, there's plenty to laugh at in the world of figure skating, a premise that "Blades of Glory" stretches to, and perhaps beyond, the limit. Jon Heder, the incomprehensibly beloved wunderkind of 2004's "Napoleon Dynamite," plays figure-skating champ Jimmy MacElroy, a sensitive artiste who digs the not-so-swingin' sounds of Andrea Bocelli and Sarah Brightman: The music is in his heart and in his hairdo, a lacquered tousle of blond surfer-god curls. (The first and silliest of his costumes is a shiny stretch peacock suit complete with a spray of tail-feathers sprouting jauntily from his butt crack.)

Will Ferrell is Chazz Michael Michaels, Jimmy's chief rival and his opposite in every way: When he swaggers onto the ice in his spangled biker-gear outfit, his pelvic thrusts meticulously choreographed to Billy Squier's early-'80s neanderthal-rock hit "The Stroke," he plays the crowd as if it were his own Gibson Flying V. The ladies toss their thongs and double-D brassieres his way; he flexes his pecs in response. Jimmy looks on in disgust as Chazz sullies his beloved sport.

But after a post-championship scuffle, the two are banished from their division forever. They settle into boring, skating-related day jobs, until someone hatches the bright idea of getting this Maggie and Jiggs -- you can guess who's been cast in the femme role -- together to compete in the pairs division. Jimmy's former coach (played by Craig T. Nelson, also in a ridiculous hairdo, a kind of Prince Valiant pageboy minus the bangs) goes to work, training them to drift gracefully in each other's arms, when really all they want to do is clobber one another.

Most of the gags in "Blades of Glory" -- written by the team of Jeff Cox and Craig Cox, and John Altschuler and Dave Krinsky -- play off the head-butting contrast between these two characters: Jimmy is gentle and effeminate (he's shy with girls, although there's one in particular he does like); Chazz is a macho buffoon who can't keep his paws off the ladies. I suspect the directors -- Will Speck and Josh Gordon, who have worked mostly on commercials -- and writers truly believe they're making a progressive movie, at least a mildly progressive one: We'd never expect to see a male couple in pairs skating. How would we react if we did? The picture even includes a montage of various guys on the street reacting to the idea of a male pairs skating team; it includes a preacher man jawing on about how unnatural it is. On some level, I'm sure you could read "Blades of Glory" as a brief for the acceptance of gay marriage.

But while I don't think "Blades of Glory" is exactly homophobic -- it's not mean-spirited enough for that -- there's something a little too cheap and easy about the way it plays up to the ultra-straight guys in its target demographic. You know the ones: Guys who go to the movies together and, even at a semi-crowded show, insist on keeping an empty seat between them, lest anyone get the wrong idea. (Sure, maybe they just need the extra leg room. Or the extra third-leg room.) "Blades of Glory" doesn't seem to know whether it's sending up homophobia or cuddling up to it. On the one hand, it asks the rhetorical question, "So what's wrong with the idea of a guy-guy pairs team?" On the other hand, Jimmy's butt-strutting in that peacock suit, his mincing walk, play right into the stereotypes that boneheads everywhere love to laugh at.

In places, "Blades of Glory" is clearly sending up male fears of homosexuality: The pair's increasingly outlandish routines include one in which Chazz holds Jimmy aloft with just one hand -- gripping his crotch. (He's like Charles Atlas proving his strength by holding up the "before" version of himself, the skinny guy who gets sand kicked in his face.)

But even before you start asking what all of this means, you might need to ask, "Is any of it actually funny?" The actors (who do their own skating, although it's greatly enhanced by wire work and blue-screen effects) appear to be massaging the material pretty desperately: Heder's soft-focus blandness is supposed to be sweet, but his affected gormlessness exhausts me. Still, he pulls off the physical demands of the role with a great deal of style: Gangly off the ice, he's effortlessly athletic on it. And Ferrell, as he did in "Anchorman: The Legend of Ron Burgundy" and "Talladega Nights," is clearly having fun sending up American machismo and male entitlement. Chazz heads out to a Sex Addicts Anonymous meeting: His outfit for the occasion is a sparkly velvet shirt and a fringed jacket, and he appraises himself with more unabashed vanity than a drag queen. As he brags to the wide-eyed Jimmy about all the skating stars he's bedded (he has a tattoo on his chicken-skin-white bod for each one), he says of the doe-eyed cutie Sasha Cohen: "Don't let her fool you. She's as cold as the ice she skates on." Then, for emphasis, he adds, "She's colder than dry ice."

But the chemistry between Ferrell and Heder doesn't amount to much. They're OK at horsing around together, yet they barely seem to connect. (Maybe that's because Heder is so aggressively oblique as an actor. He's a Teflon surface, not an elastic one: There's little there for another actor to bounce off of.) Sometimes the movie's supporting players, like Amy Poehler and Will Arnett, as a brother-and-sister pairs team (now that's twisted), are funnier than the leads: Poehler's character wears her naked ambition like one of Nancy Kerrigan's filmy, spangled Vera Wang numbers -- its very obviousness is a delicious gag. And several real-life skating stars -- including Kerrigan, Cohen, Brian Boitano and Peggy Fleming -- have cameos, although mostly, the camera barely glances their way. "Blades of Glory" is silly and mostly, probably, harmless. Why shouldn't we have guy-guy couples in pairs skating? There's no reason we shouldn't. We'd just hope they could come up with better routines than these.