One of the most important films of the past 30 years finally gets a decent release. But can its challenging subject matter find an audience? 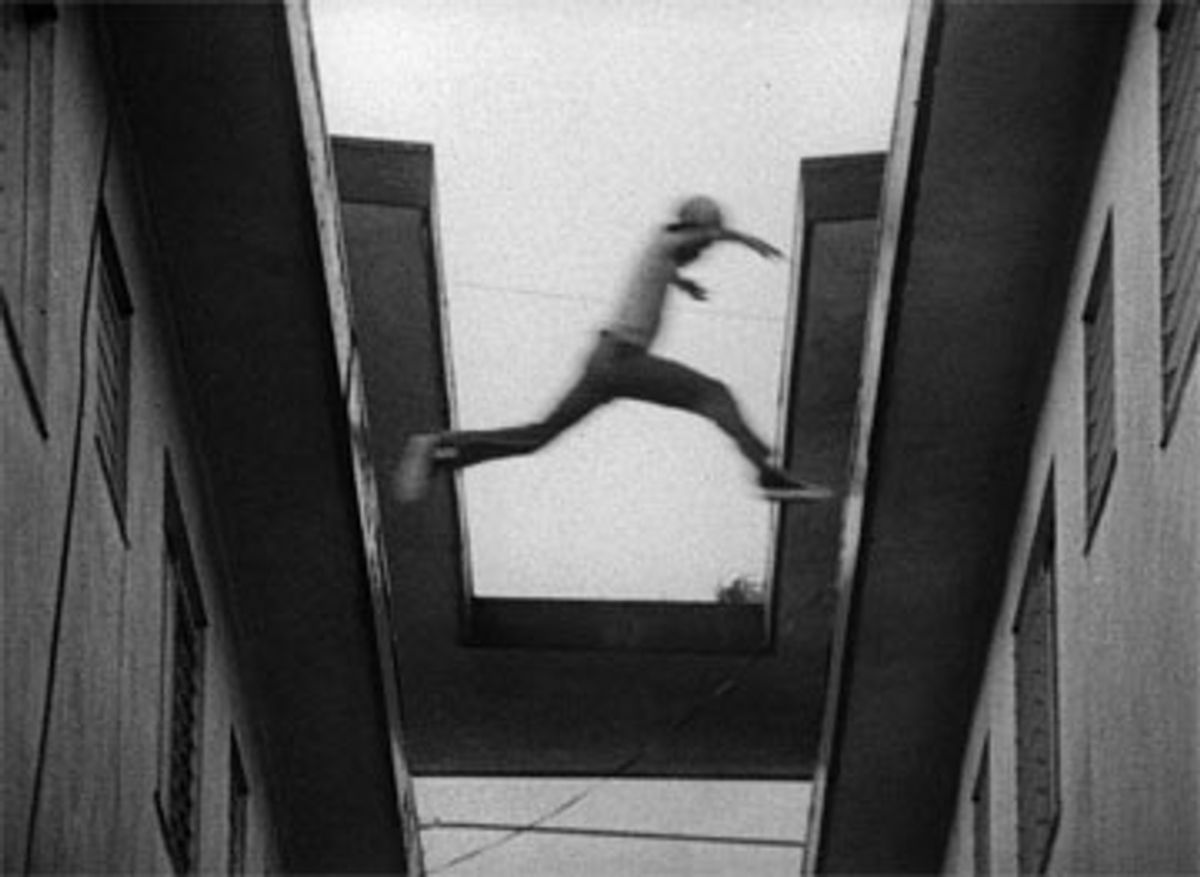 Shot in and around the Los Angeles neighborhood of Watts in the mid-1970s, Charles Burnett's "Killer of Sheep" is one of the most famous unseen films ever made in America. Of course it's not literally unseen; "Killer of Sheep" won a critics' award at the Berlin Film Festival in 1981 and has played sporadically, on increasingly ragged 16mm prints, at film festivals and college screening rooms ever since. But there were legal problems with the film's soundtrack (which features an astonishing range of African-American pop music, from Paul Robeson to Dinah Washington to Earth, Wind & Fire) and no distributor, in those pre-indie days, seemed eager to tackle a meditative, nearly plotless, black-and-white art film about the lives of poor black people. It's not like that would be such a hot marketing concept today either, come to think of it.

So even though "Killer of Sheep" was among the first 50 films entered in the Library of Congress' National Film Registry, and made the National Society of Film Critics' list of the 100 essential films of all time, it has never been theatrically released. Until now. The UCLA Film and Television Archive (an organization that has earned a special place in movie heaven) has restored Burnett's 16mm master to a magnificent new 35mm version, and cleaned up its glitchy soundtrack as much as possible. Even if you belong to that modest group of film buffs who've actually seen "Killer of Sheep," this restoration feels like an entirely new movie.

And what an inexpressibly sad, strange and lovely movie it is. I think the writer and filmmaker Michael Tolkin was right when he said that if "Killer of Sheep" had been made 20 years earlier in Italian, it would be dissected and argued over and memorized in every film-school classroom. But the world Burnett captures on the streets of Watts, circa 1976 -- this was his thesis film at UCLA, shot on weekends, over the course of a year, for about $10,000 -- is at least as distant to most contemporary viewers as the postwar slums of Rome or Naples.

"Killer of Sheep" has a story, more or less, or at least it follows a few episodes in the life of Stan (Henry Gayle Sanders), a tender, introspective man who seems to be gradually grinding down under the pressures of poverty and his grueling job in a slaughterhouse. In all honesty, Burnett's writing can be stiff and the acting in "Killer of Sheep" is indifferent. But the reason to see this film does not lie in the dialogue. Sanders may swallow his lines sometimes, but he's a terrific physical presence, weatherbeaten and downcast and handsome, and he forms a visual anchor for the tremendous, poetic flow of Burnett's images.

In the opening shots of "Killer of Sheep," we watch a young boy, a pre-adolescent on the cusp of manhood, berated and beaten by his parents for failing to protect his brother from a bully. In the last shot, we watch a group of sheep in the slaughterhouse, urged on by Stan, crowding and rushing into the metal corridor that leads to their final destination. No graduate-level understanding of semiotics is required: For all the vaunted warmth and sympathy of Burnett's images, it's pointless to deny that his vision is a profoundly fatalistic one. What falls between those two scenes is a breathtakingly tender visual essay about the herky-jerky progress of lives whose destiny has already been determined.

Most of Burnett's best scenes are wordless or nearly so, accompanied by some of the songs on that amazing soundtrack. His deep-focus shots of children fighting and playing in the street -- these were unrehearsed, unscripted and largely spontaneous -- have an unparalleled purity and intensity, recalling his obvious models, directors like Rossellini and Renoir and Satyajit Ray. (It's hard to overemphasize how strange and ambitious and completely out of context it was for a black urban filmmaker with no money and no reputation to make that kind of movie in 1977.)

Stan hauls tubs of eviscerated sheep guts in the slaughterhouse to the strains of William Grant Still's "Afro-American Symphony." A group of men shoot craps and bicker at a crowded house party to Elmore James' Chicago blues classic "I Believe." In a heartbreaking sequence that somehow distills the film's combination of tenderness and bitterness down to a minute or two, Stan's 4-year-old daughter sings along tunelessly to Earth, Wind & Fire's hit "Reasons" ("the reasons that we're hereb

Burnett's editing can be deliberately disorienting (a style he has continued throughout his enigmatic career) and he offers almost no background on the immense roster of characters who drift through the film. "Killer of Sheep" is all about its moments: When Stan and his buddy Gene go to some dubious deadbeat's house to buy a new engine for their car -- predictably, this doesn't go well -- what's important is the journey and not the destination. They pass a parked car full of people who seem ready to go somewhere, until one of them reaches through the nonexistent windshield to reach a can of Schlitz Malt Liquor. At the apartment they visit, some guy who's been beaten up is recuperating on the floor. This doesn't stop him from flirting crudely with a friend's girlfriend, who kicks the crap out of him some more.

Burnett takes the people of Watts pretty much as he finds them, without apology or sociological justification or prescription. He has a soft spot for small children and thugs and sassy, big-hipped women and the kind of black people other black people call "country," and at the same time he renders Stan and his wife, more or less functional members of society, with a kind of ruthlessness. It's as if their thoughtfulness, their hopes and dreams, their warm moments, are not really going to help them in this place. In the film's most famous scene, Stan and his wife dance slowly, backlit by a sunny window, to Dinah Washington's version of "This Bitter Earth." It's positively heartbreaking, and it makes you think for a few minutes that these people and their community and their country will be OK. Then the record ends and it's over. Stan has to go kill some more sheep.

Burnett was a full decade ahead of the so-called black new wave of the '80s that produced Spike Lee and John Singleton, and it would be nice to tell you he had become a father figure to an entire younger generation. It isn't quite true. Across his uneven future career, which has included the 1990 feature "To Sleep With Anger" and the 1994 feature "The Glass Shield" (and, more recently, the television films "The Wedding," "Selma, Lord, Selma" and "Finding Buck McHenry"), he has remained a lone wolf and something of an eccentric, never prolific enough or enough of a hustler to become famous or successful. (His 1999 feature "The Annihilation of Fish," with James Earl Jones and Lynn Redgrave, has never been released at all.)

"Killer of Sheep" remains the first and best testament to Burnett's talent, and it's not a movie that will find a large audience among black or white viewers, or those of any color. What minuscule support Burnett has received in his career has come from film critics, intellectuals and a handful of prominent figures like Danny Glover (who starred in "To Sleep With Anger") and Oprah Winfrey (who produced "The Wedding"). There is a clear political agenda behind "Killer of Sheep" and the rest of his work that only an idiot could miss, but Burnett is profoundly uninterested in boosterism or propaganda or false optimism. He has belonged to the long tradition of prophets without honor, but he may finally be getting his due. In his peculiar and lonely fashion he's not only the most important African-American director but one of the most distinctive filmmakers this country has ever produced.

"Killer of Sheep" opens March 30 at the IFC Center in New York and the Jacob Burns Film Center in Pleasantville, N.Y.; April 6 at the Nuart Theatre in Los Angeles; April 20 in Denver and Lincoln, Neb.; May 4 in Atlanta; May 18 in San Francisco; May 21 in Austin, Texas; June 1 in Dallas, Santa Cruz, Calif., and Washington; June 8 in Boston; June 15 in Houston; and June 22 in Pittsburgh and Seattle, with more engagements to follow.