Substance triumphs over style in this satisfying thriller for grown-ups starring Joseph Gordon-Levitt. 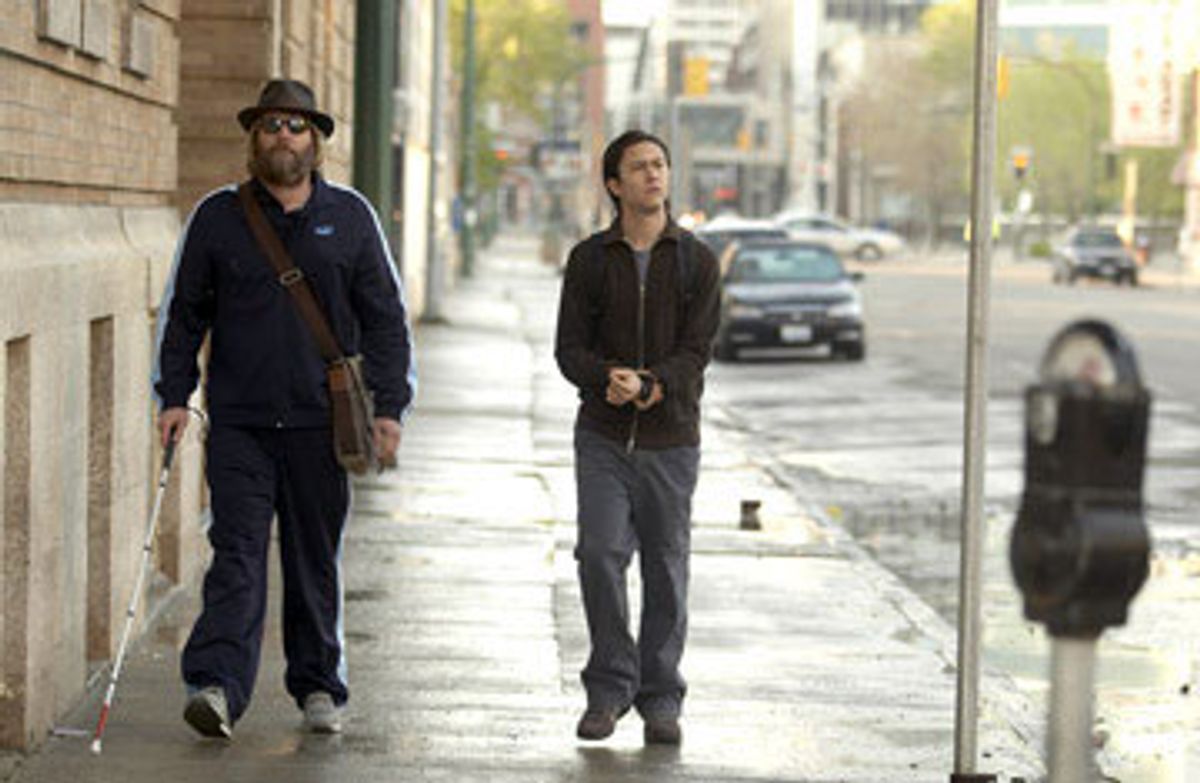 Even those of us who love stylish thrillers have to concede: Sometimes you just want a plain, straightforward one, with no elaborate gimmicks, no aggressively art-directed opening credits, no bullet's-eye-view camera moves. Scott Frank's "The Lookout" is so refreshingly straightforward that at first you may not know what to make of it. The flashback that opens the movie, in which four recklessly happy suburban teens speed down a dark highway in what we might have called, in olden times, a roadster, turns our sense of time and place inside out: The story is set in the present, but the movie's early moments carry echoes of the past, offering a vision of careless, romantic youth straight out of "Rebel Without a Cause."

There's no doubt these joyriding high schoolers are headed for tragedy. And the one behind the wheel, privileged rich kid and hockey star Chris Pratt (Joseph Gordon-Levitt), will survive the ensuing accident to live a second life completely different from his first: After sustaining a serious head injury, he can no longer remember the proper sequence of everyday activities. A simple task, such as opening a can of tomatoes and heating the contents on the stove, requires him to plunge deep into his brain: Nearly every minute, he's forced to scramble for the lost secrets of everyday living. He blurts out unshaped thoughts, inappropriately. Aside from a few barely noticeable infirmities -- he walks with a stiff-legged gait, and at one point the camera shows us the scars that arc across his torso -- he looks cursedly normal. His body may have rallied, but his brain took a beating.

What happens to Chris in "The Lookout" -- how he's seduced by a minxlike former stripper named Luvlee Lemons (Isla Fisher, of "Wedding Crashers," in a small but artfully shaped performance), how he gets mixed up with a charismatic thug (Matthew Goode) who's hatching a devious plot to rob at least one Midwestern bank, and what he learns along the way -- is less important than how it happens. This is a sure-footed, restrained picture, in which the characters are allowed to drive the action -- not the other way around. "The Lookout" is the directorial debut of Scott Frank, who has written or co-written numerous screenplays, among them Steven Spielberg's dystopian Philip K. Dick fable "Minority Report," Kenneth Branagh's sharp, funny and lush romantic melodrama "Dead Again," and two Elmore Leonard adaptations, Barry Sonnenfeld's "Get Shorty" and Steven Soderbergh's "Out of Sight."

It used to be a given that a good movie would have a good script as its backbone. Now, when a movie is bad, it's often hard to tell how much of that is the screenwriter's fault (especially in cases where a movie has excessive multiple credits) and how much of it can be chalked up to careless or arrogant direction. But "The Lookout" is like a well-made garment turned inside-out: The structure, the dialogue, the characters -- these aren't just part of the movie. They are the movie.

The story may sound reminiscent of Christopher Nolan's "Memento." But unlike "Memento," this isn't just a puzzle-movie stunt. Frank isn't an overly jazzy director: That's a strength, although in places the movie could use just a little more dramatic momentum. There are some questions Frank allows to slip through the cracks: A significant character disappears without any real explanation. (You understand why this character would want to disappear; you just can't believe it would be all that easy.) And it's hard to believe that a character who can't remember the steps involved in opening a can -- who must constantly write down reminders for himself in a little notebook, who not so long ago carried a card explaining, among other things, that he is unable to use stairs or elevators -- would be allowed to drive a car, as Chris is. Those flaws don't invalidate the movie; it's just that the picture is otherwise so thoughtfully constructed that you'd expect Frank to more observant about those details.

Even so, "The Lookout" is without a doubt a movie made for grown-ups, the kind of picture we used to take for granted but now have to consciously seek out. Shot by Alar Kivilo, it has an austere, unvarnished look. At the beginning of "The Lookout," I felt a knot tightening in my stomach: Chris is such a vulnerable character that I was certain he was going to come to harm, and I knew I had to steel myself for it. That's part of Frank's intent -- he knows what's at stake here for his characters -- but he doesn't jerk us around carelessly just for effect. He uses the movie's supporting characters to give it extra shape and shading: Jeff Daniels plays Chris' roommate, Lewis, a curmudgeonly sage who, even though he's blind, looks after Chris like the most vigilant watchdog imaginable. Sergio De Zio plays Deputy Ted, the Mayberry R.F.D.-style sheriff who regularly stops by, bearing doughnuts, to check up on Chris, who works nights as a janitor at a bank. (The story takes place in Kansas City, which, in the movie's terms, is a setting with just enough menace to offset its comfortable Midwestern charm.) And when Frank lets bad things happen to good characters, he doesn't present these events with a "That's life in the real world, kid" hipster wink: He allows us to feel a sense of loss for these characters. There's some violence in "The Lookout," but Frank isn't fixated on grisliness. He's not the kind of director who feels he has to toughen us up -- instead, he takes the more daring route of trusting us to feel.

He also, obviously, chose his lead actor very carefully. Joseph Gordon-Levitt is one of those rare child actors -- now 26, he's been working in TV and movies since the late '80s -- who's been able to segue gracefully into adult roles. In pictures like Rian Johnson's high-school noir "Brick," and particularly in Gregg Araki's "Mysterious Skin," Gordon-Levitt has shown a knack for playing tough-tender troubled kids, young adults who've been forced to act like grown-ups even as their faces still speak of childhood. As Chris Pratt, Gordon-Levitt is a solemn, elfin presence. When he tells a case worker (played by the wonderful Carla Gugino, in a too-tiny role), "I just wanna be who I was," the words are less plaintive than they are dreamy: It's as if, by the time he's even articulated this simple desire, the words' meaning has already evaporated from his brain. This is a sincere and often moving performance, but someday soon, Gordon-Levitt will have to leave these lost-kid roles behind. We already know he's an extremely sensitive actor; I think he's got more vitality, more verve, than he's been allowed to show.

For now, though, Gordon-Levitt is part of the equation that makes "The Lookout" work. As Lewis tells Chris, trying to help him piece together, in chronological order, the events of an average day, an exercise that's supposed to help him restore some sense of order to his brain, "It's a story, kid. Stories are what help us make sense of the world." They're also what bring us to the movies in the first place. Scott, unlike so many of his peers, knows that B follows A, and the cart comes behind the horse.