Punishing hearings on the U.S. attorneys scandal brought no relief for the attorney general's disgraced former chief of staff, or the embattled White House. 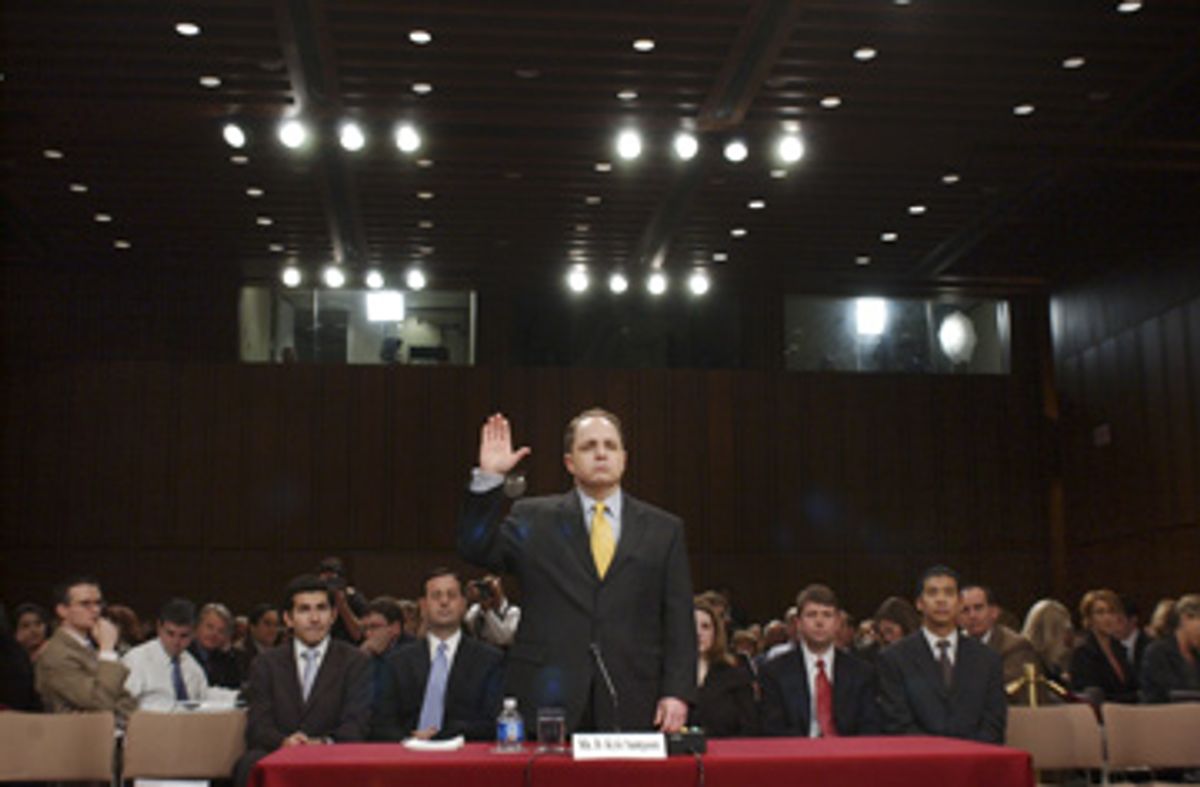 Kyle Sampson, a balding lawyer in a baggy charcoal suit, came before Congress Thursday to do penance for his sins.

As the former chief of staff to Attorney General Alberto Gonzales, Sampson apparently had orchestrated the recent firing of eight U.S. attorneys. He ran planning meetings, put together memos, and helped organize the bungled response to congressional Democrats when they investigated the dismissals. He resigned his post two weeks ago in disgrace, taking responsibility for mishandling a scandal that now threatens to take down Gonzales and send subpoenas into the White House.

"This should not have happened," Sampson said as he sat alone at the hearing table, reenacting a recurring Washington spectacle, the ritual flogging of the fallen public servant. "I come here today because this episode has been personally devastating to me and my family."

But the Senate Judiciary Committee offered no sympathy, not for Sampson, not for his wife and three children, and certainly not for the tangled mess of misleading statements and botched decisions that he and other top Justice Department officials have left behind. They treated him as a prosecutor treats the accused, peppering him with rapid questions and offering little comfort beyond the occasional bathroom privilege. "Give us a signal," said Vermont's Patrick Leahy, the committee's Democratic chairman. "And we'll make it possible for you to go."

The facts Sampson did remember offered him -- and his former boss -- little salvation. He told Congress that Gonzales had made an inaccurate statement when he claimed not to be involved in discussions over the fired prosecutors. "I remember discussing with [Gonzales] this process of asking certain U.S. attorneys to resign," Sampson said.

Sampson took responsibility for writing a misleading letter to Congress and approving other testimony that turned out to be wrong. He said he regretted his "bad idea" to use a little-known Patriot Act provision to avoid Senate confirmation of new prosecutors. He claimed to have kept no real file on the prosecutor dismissals, save some papers he dumped into a drawer in his desk.

In the most astounding moment of the hearing, he even admitted having suggested to top White House lawyers that the Bush administration fire U.S. attorney Patrick Fitzgerald, who at the time was working as a special prosecutor in a case that involved Karl Rove and led to the conviction of I. Lewis Libby, Vice President Cheney's top aide. "Immediately after I did it, I regretted it," Sampson said. "I knew that it was the wrong thing to do. I knew that it was inappropriate." He added that, to his knowledge, the White House did not pursue the recommendation.

New York Sen. Chuck Schumer, the Democrat who has zealously spearheaded the investigation into the firings, leapt on Sampson's admission about Fitzgerald. He was hoping for a tie to Rove, the senior Bush political advisor whose involvement in the prosecutor purge -- though evident from a recent pile of documents handed over by the administration -- remains shrouded in some mystery. "Did Karl Rove have anything to do with your suggestion that Fitzgerald be fired?" Schumer asked.

"Can you search your memory and be sure of that?" Schumer persisted.

"I don't -- Senator, I just want to answer to the best of my recollection. I don't remember ever speaking to Karl Rove about anything related to Patrick..."

"How about to any of his people who worked in his office or worked for him?"

"I don't remember any such conversation."

"OK," Schumer continued. "Is it possible? Because you're not ruling it out."

"To the best of my recollection, no. I don't remember that."

"I don't think it happened."

"You don't think it happened would mean there's a chance that it's possible, correct?"

"Senator, I don't think it happened. I don't remember any such conversation."

The hearing dragged on. During the lunch break, Schumer led his fellow Democrats out into the hallway to stand before the microphones and cameras. "By the way," he cautioned to Leahy as they approached the press. "We should be real low-key."

But once there, Schumer did not hold back. "The credibility of the attorney general on this issue has been more or less shattered by what happened in that hearing room," he declared. Sen. Sheldon Whitehouse, D-R.I., a former U.S. attorney himself, nodded confidently nearby.

Throughout the testimony, Sampson maintained that "to my knowledge" none of the U.S. attorneys had been dismissed because of their work on any particular case. Instead, he maintained that they had each been singled out for a combination of reasons, including an unwillingness to follow the policy priorities of the White House.

Though illuminating at turns, Sampson's protracted testimony skirted the issue at the heart of the investigation, which was described by Pennsylvania's Arlen Specter, the committee's ranking Republican. "It is admitted that the president has the authority to replace U.S. attorneys for no reason," Specter said. "But I think there's a consensus that the president does not have a right to ask for resignations for a bad reason."

As the scandal metastasized over the past month, it became clear that the administration's stated reasons for the firings were, in a number of instances, disingenuous. Even now, after all the press conferences and Capitol Hill testimony, questions remain as to why the U.S. attorneys, several of whom were widely respected in the law-enforcement world, were fired.

Still, Sampson flatly rejected the relevance of an e-mail that Democrats held up as the single biggest piece of evidence that a "bad reason" had been involved. On May 10, 2006, Carol Lam, a U.S. attorney in California, notified the Department of Justice that she would seek a search warrant for Kyle "Dusty" Foggo, a high-ranking CIA official who has since been charged with fraud in connection to a bribery case of convicted Republican Rep. Randy Cunningham. The next day, Sampson wrote an e-mail, referring to the "real problem we have right now" with Lam, and called for her dismissal.

Sampson said the two events were unrelated. "The real problem I was referring to in that e-mail was her office's failure to bring sufficient immigration cases," he said. He noted that the Justice Department was scheduled to meet that week with California Republicans, who had complained about Lam's lack of enforcement of immigration cases. "I understood that Carol Lam was a political appointee," Sampson explained.

Hours later, he could take it no more, and he gave the signal for his allotted bathroom break. "Would you like to take a break?" Schumer asked, once he saw the sign.

"Would that be OK?" asked Sampson.

But Schumer proposed one more round of questions. "Can we just go through Mr. Whitehouse, because he's been waiting?" Schumer asked the witness.

"There's no need for that if you'd prefer to take a break now," Whitehouse interjected, somewhat mercifully.

Schumer relented. "We will resume at 4:10," the New York senator said.

And the fallen public servant was allowed out of his chair and out of the room, away from the cameras and the questions and the scribbling press. For five minutes, he was permitted some relief.