Is this the end of organic coffee?

Thanks to a recent hush-hush USDA ruling, your clean-conscience, fair-trade, organic latte may soon be a thing of the past. 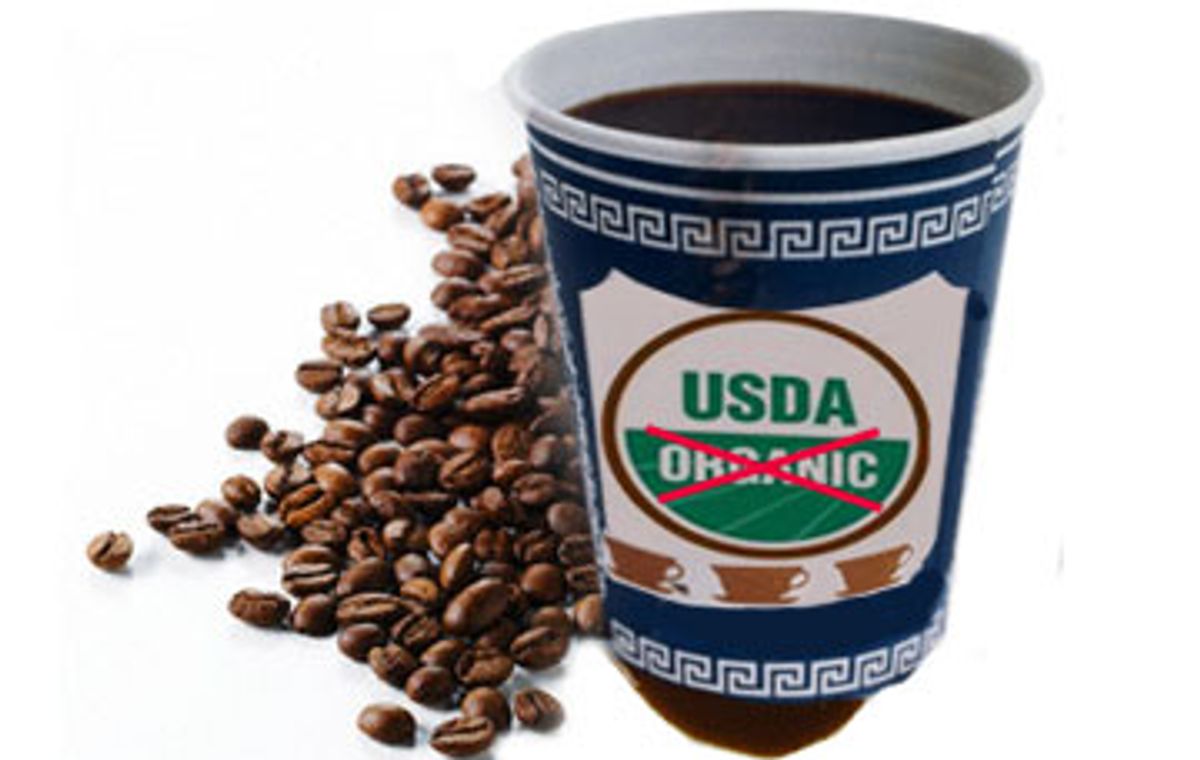 Enjoy your organic coffee now, while it's hot -- because it may not be around for long.

Last month, the U.S. Department of Agriculture quietly released a ruling that alarmed organic certifiers and groups who work with third-world farmers. The decision tightens organic certification requirements to such a degree that it could sharply curtail the ability of small grower co-ops to produce organic coffee -- not to mention organic bananas, cocoa, sugar and even spices. Kimberly Easson, director of strategic relationships for TransFair USA, the fair trade certification group, puts it bluntly: "This ruling could wipe out the organic coffee market in the U.S."

TransFair USA is not the only organization sounding the alarm. In the past week, I spoke with nonprofits, businesses and organic certifiers, all of whom are concerned that the USDA ruling will catastrophically raise costs for small-scale producers of organic goods and likely push them back into conventional commodity markets.

The USDA's controversial ruling hinges on methods of organic certification -- a process in which inspectors visit farms and walk through fields, review growing methods, and see what measures the farmer is taking to avoid pests and weeds. If the methods comply with regulations, the inspector then makes a recommendation to a certification agency; and if the farm is approved, it is certified for one year and granted permission to carry the organic label on its products. The USDA National Organic Program has overseen this process since 2002, when a patchwork of state organic standards were codified under a national regime.

Until now, however, there has been a special provision for "grower groups" that made certification practical for farmer cooperatives in the Third World, whose memberships can reach into the thousands. Because of the immense logistical demands of inspecting every farm in a large co-op, a compromise was reached: An organic inspector would randomly visit only a portion of the group's farms each year, usually 20 percent. The grower groups would then self-police the remainder through a manager who made sure they followed the rules. The following year, an inspector would return and visit another 20 percent of the farms. After five years, all farms would be inspected.

But in the ruling made public this month, the National Organic Program overturned that system, saying every farm in a grower group must now be visited and inspected annually -- as has been the practice in the United States -- rather than only a percentage.

"[The previous system] was a mechanism for the low-resource global south to afford organic certification," said Michael Sligh of Rural Advancement Foundation International USA. He has worked with farm groups in the global south for years and in the 1990s helped craft the U.S. organic regulations. His e-mail in box is now bulging with questions about the ruling from non-governmental organizations across the world. "We're literally talking about hundreds of thousands of farmers who will be affected," Sligh explained. The staggered inspection method has been crucial for, say, coffee grower unions in Ethiopia, which have upward of 80,000 members. It was used by organic tea and spice farmers in India, organic sugar co-ops in Brazil, and organic cocoa farmers in Costa Rica, who would otherwise not be able to ship certified organic products to wealthier countries in the Northern Hemisphere.

The new USDA certification ruling arose out of a case involving an unnamed Mexican grower group that failed to detect a farmer using a prohibited insecticide and prevent empty fertilizer bags being used for crop storage -- both of which violate USDA organic regulations. NOP blamed the problem on inadequate internal controls of the self-policing system and decided to ban the practice everywhere. "The ... use of an internal inspection system as a proxy for mandatory on-site inspections of each production unit by the certifying agent is not permitted," the NOP stated. The agency informed organic certifiers of these revised standards in January, and in March published the ruling on its Web site.

In conversations over the past week, certifiers told me they knew of instances where the co-op inspection system had broken down, but thought that the NOP had taken an extreme stand, ending the possibility of group certification and ignoring the constraints of low-income producers. A more measured response would have been to punish the errant grower groups and then launch a public review of the certification system. "We need to have open comment on this and have a dialogue; we need to take a step back and look at the whole thing," said Patty Vincent, coffee product and certification manager at Green Mountain Coffee Roasters, an organic and fair trade coffee company. The goal of certification should be to ensure the integrity of the organic product -- so consumers know what they are buying. But Vincent and others believe that integrity can be achieved without sacrificing the economic livelihood of farmers and the viability of the product itself.

If the ruling is unchallenged, certification costs will rise precipitously for co-ops in developing countries. Lebi Perez, training coordinator for Organic Crop Improvement Association International, a U.S. certification group active in Mexico and Central and South America, explained that it currently takes about 20 to 30 days to certify a grower group. "You have to go to the community by car, bus, mule or on foot, and access is difficult during the rainy season, because a stream might swell and you can't get across," he said. In the best of times, inspectors visit four or five farms a day. (Perez said OCIA certifies about 300 grower groups in the region, which average about 400 members each -- or more than 100,000 farmers.)

"We think it will now take up to a year to certify an entire group -- that's our calculation," Perez explained. And because OCIA charges $150 to $270 per day of inspection, the farmers' financial burden will increase dramatically. For small coffee and cocoa growers who earn about $2,000 a year, that burden may become too heavy; to survive, some will be forced to drop organic certification.

Indeed, the only farms likely to afford the new inspection program will be large-scale plantations. As an illustration, consider the case of one co-op of Peruvian banana farmers, for whom the USDA ruling is especially ironic: The 1,500 growers formerly worked as tenants on a single plantation, but with agrarian reforms in the 1960s each family got a plot of the landlord's land. Had that plantation been maintained, it could have had one visit a year from an inspector. But because the property is now split among 1,500 families, inspectors will need to visit each farm on the land.

"Our cost is going to be at least double, because we're going to rise from 40 inspection days a year to more than 100," said Luis Monge, regional certification manager with Dole, which buys organic bananas from the Peruvian co-op. If the market does not cover the extra cost of certification, Dole has another option. Instead of reaching out to small, community-based grower groups, it could buy exclusively from larger banana plantations in Colombia, Ecuador and Honduras that can afford to pay for their own certification. "It will present an opportunity for larger farmers to get in business," Monge agreed. "But that's against the roots of organic agriculture, isn't it?"

In the end, though, even the rise of plantations may not be enough to keep certified organic coffee in American mugs. The U.S. market for the brew is growing 40 percent a year, but organic coffee -- unlike bananas -- is impractical to farm on a large scale. It's too labor-intensive, because the plants grow under a shade canopy on steep hills and must be harvested and weeded by hand. So farmers seeking higher income may make the switch to non-organic methods, tearing out native shade trees and relying on herbicides and pesticides to boost bean yields. Growers who can't afford to make that jump may continue to farm organically and forgo certification, selling at the lower conventional price and hoping for the best.

Either way it's a bitter cup. But if the USDA ruling remains unchallenged, it's what we'll all be drinking.

Samuel Fromartz is author of "Organic Inc: Natural Foods and How They Grew" and blogs at Chews Wise.