Another conservative has a change of heart

Former Clinton inquisitor Bob Barr explains why he left the Republican Party and why he shouldn't have voted for the Patriot Act. 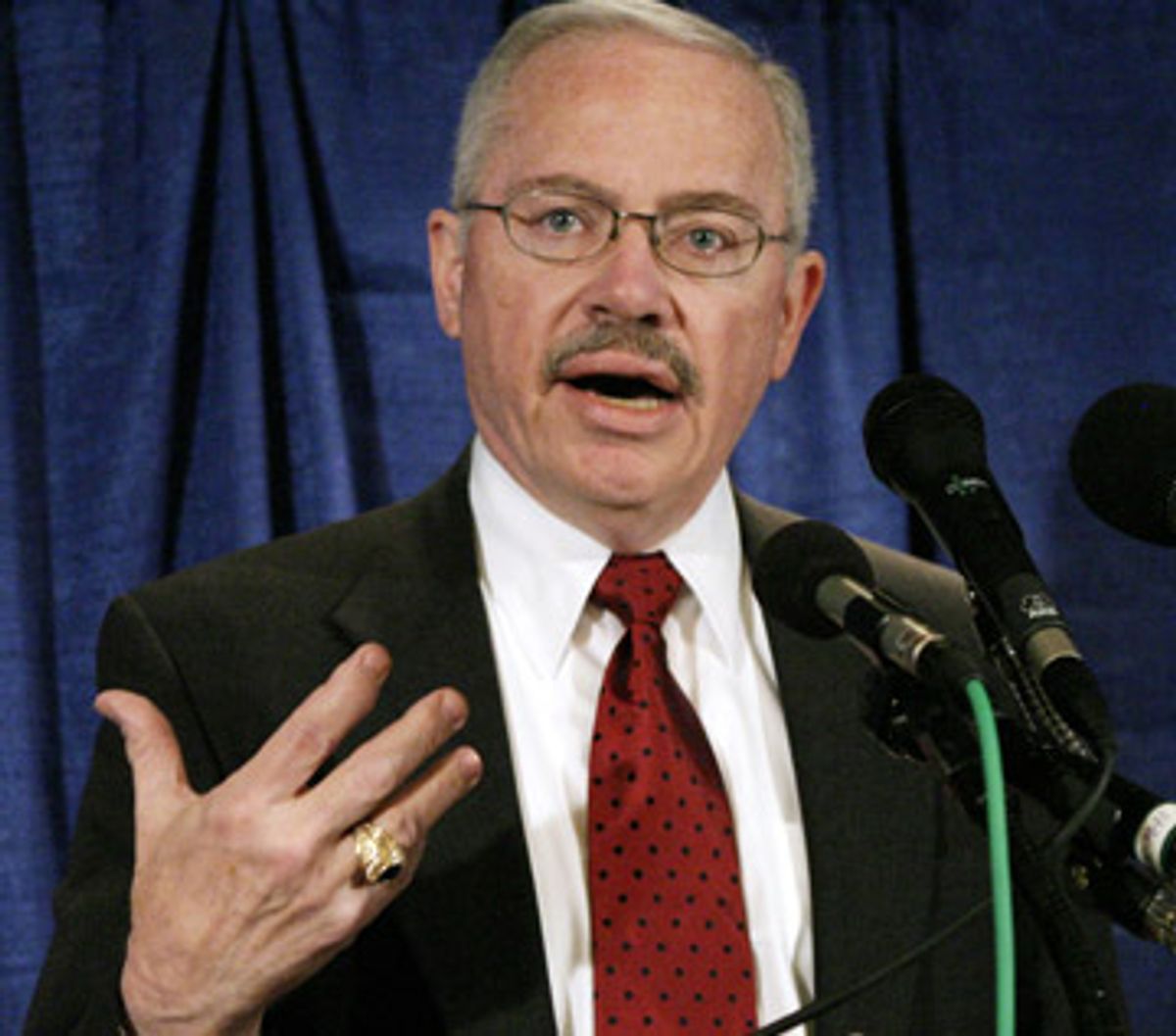 During the Clinton administration, Rep. Bob Barr of Georgia was one of the most visible Republicans in America. In 1998, the arch-conservative was a House manager of President Clinton's impeachment trial. But since leaving Congress in 2003, Barr has become a vocal critic of the constitutionally questionable policies of Clinton's Republican successor, George W. Bush. In 2004, he declined to support Bush's reelection, and in late 2006 he formally left the GOP to take a leadership position in the Libertarian Party. Two weeks ago, Barr and several other conservative heavyweights announced the founding of the American Freedom Agenda, a group opposed to what it sees as assaults on civil liberties in post-9/11 America. And in another break with his past, last week Barr, an erstwhile anti-drug warrior who once led a congressional effort to block medical marijuana use in the District of Columbia, announced that he is joining the pro-legalization Marijuana Policy Project as a lobbyist.

Salon spoke with Barr about his views on civil liberties, the American Freedom Agenda and his reasons for abandoning his old party. We reached him at an Atlanta phone number that ends, like all of the office numbers Barr maintains, in the digits 1-7-7-6.

You recently announced the creation of the American Freedom Agenda. Can you tell me a little bit about that and what you're doing there?

This is part of a multifaceted effort to bring attention to the abuses and losses of our fundamental, constitutionally guaranteed liberties since 9/11. This particular effort is spearheaded by [former Reagan administration official] Bruce Fein and focuses on 10 specific issues related to our fundamental civil liberties that Bruce, myself, [American Conservative Union chairman] Dave Keene, [conservative direct-mail pioneer] Richard Viguerie and hopefully a number of others feel are extremely important and go to the core of constitutional liberties in this country. So we're going to focus on those efforts to educate the public, drive home the message to appropriate members in the House and the Senate as to the importance of these constitutional liberties and work to ensure legislation, where appropriate, to address them.

You also recently announced that you were leaving the Republican Party and joining the Libertarian Party. What was your reason for doing that?

Several-fold. One, that the Libertarian Party, among all of the parties out there, is the only one that is true to my core philosophy of working to minimize government power and maximize individual liberty. None of the other parties, and especially the Republican Party any longer, is at all committed to that philosophy. And secondly, my great concern, manifested especially since 9/11, is the assaults on our fundamental civil liberties by this administration. [That's] personified, for example, in the disregard for the rule of law as exhibited by the warrantless NSA [National Security Agency] electronic surveillance in violation of the Foreign Intelligence Surveillance Act. More recently, [there were] documented abuses at the FBI in carrying out certain of the expanded powers granted in the Patriot Act, namely, national security letters. And in January of this year, the testimony by the attorney general that this administration does not believe that the fundamental right to a writ of habeas corpus is an important, fundamental, constitutional guarantee. So what we have is a party, the Republican Party, to which I was very proud to belong for many, many years, no longer being committed to a core conservative philosophy. The Libertarian Party is so committed, and I felt that at the time that it was necessary to make a change because of the seriousness of the assaults on our civil liberties.

Why not the Democratic Party?

The Democratic Party, while much better than the Republican Party on these particular issues, in other areas does not share my commitment to smaller government, maximized individual power and minimized government power. For example, in many social programs, [Democrats] use the power of taxation to take money from individuals and use [it] for expanded government programs of dubious value and dubious constitutional basis.

How viable a force is the Libertarian Party?

Certainly it is not in the same league with the Republican or Democrat Party; no other third party is. Our country, for 150 years or so, has been very much in sync with a two-party system, and the entire political and electoral process is centered around that. So the real goal for the Libertarian Party in my view -- I certainly don't speak for it -- needs to be to take that core philosophy and do a top-notch job of explaining it to the American people, and to impress on the American people the value of having a third party that is a true, workable alternative. [It needs to] work to identify, recruit and support good candidates for elective office at all levels, to work to open up the political and electoral process in this country so there are ways for a third party to truly become a player in that process and to articulate its philosophy in ways that appeal to and are relevant to the average voter, the average family out there. And certainly the libertarian philosophy of reduced regulatory burden, reduced tax burden, much smaller government and so forth, I think, will resonate very well with the American people.

What do your old Republican colleagues and supporters think of your move?

I have no idea. When I talk with individual members and political colleagues, they all express understanding of why I made the move. Pretty much everybody is frustrated on the Republican side -- at least [everybody] that I've worked with -- with the current stance of the party, which is clearly not in the direction of smaller government but in the direction of much larger government, a much more activist, powerful federal government. [There's] a lot of dissatisfaction among Republicans, so really I don't think it came as a shock or a surprise to anybody that knows me and the issues that I've worked on over the years to see that I made that change.

I was just reading a Dana Milbank column from early 2006 about your appearance at the Conservative Political Action Conference [the American Conservative Union's annual convention in Washington], and it seemed as if you didn't get a very warm reaction when you were opposing some of the administration's policies. I've talked with some other conservatives about this -- do you think that the conservative movement has become tied to the president and his policies?

I think the problem is that many conservatives have allowed themselves, in recent years, to view the conservative movement as not simply consistent with, but completely incorporated into, the Republican Party. That has caused, I think, significant problems and sort of warped the views of many conservatives -- who have sort of allowed allegiance to a party, that is, the Republican Party, or an administration, that is, the George W. Bush administration, to trump what they know in their heart of hearts is a much better approach, and that is a true conservative approach.

So the conservative movement in recent years has suffered from allowing itself to become captured by the Republican Party, and it has lost, in many respects, its independence, the power that comes from being a true independent, principled movement, the conservative movement. These issues have become very complex because of that. So, for example, when you go to speak to a group of conservatives and you are critical of the way the current administration has been denigrating civil liberties and individual freedom, many conservatives rally to the defense of the administration because they support the administration.

But I think that's changing, and you can see that, for example, just in microcosm in the group that Bruce Fein has pulled together for the AFA. David Keene, a very well-respected, longtime leader of the conservative movement, and Richard Viguerie, likewise a longtime expert on grass-roots movement on the conservative side, joining with Bruce and me to say, "Look, there are some issues here that are much more important than a political party or a particular administration and true conservatives need to band together and work for these civil liberties." So I think it really means a lot when you have leaders like that who come out and highlight what we're doing here.

We've been talking about civil liberties since 9/11. You voted for the Patriot Act -- what role did that play in any loss of civil liberties, and what do you think of that vote now?

It's a vote that I would not cast now, knowing how the powers in the act have been abused, and [seeing] how vast not just the Patriot Act powers but other powers that the administration has simply taken for itself or that Congress has granted have increased dramatically the power of the federal government. These are of great concern to me, and that's why I worked very strenuously in '05 and '06 to try to have the Patriot Act amended and some of its provisions that were up for renewal rescinded. That's why I've worked so very hard, also over the last few years, to bring attention to the real problems, where you have unfettered power for an administration, any administration, such as was granted in the Patriot Act. These are very serious problems, and even though there were some worthwhile provisions in the Patriot Act, which is why I voted for it back in '01, looking back on it now and seeing how it has been used and abused since then makes very clear in my mind that that act should not have been passed in the form that it was.

You were one of the House managers during the Clinton impeachment trial -- looking back now, what do you think of that period?

Of course, it was a different administration, different issues. The issues in the impeachment related to the sanctity of our judicial system, obstruction of justice and perjury by a very high government official, which I think certainly, even today, are very worthwhile and important to uphold: the principle that no individual is above the law regardless of their position, that when a person takes an oath in open court to tell the truth they do so, and that if they demonstrably have not done so they should pay a price for that, and the public should know about it. So I think the issues that we addressed in the impeachment were very, very important.

Speaking of that, Sen. Chuck Hagel [R-Neb.] recently speculated aloud about impeaching President Bush. Given your own experience, what do you think of impeachment when it comes to this president?

Some of the issues that we've looked at, and that have come to the public's attention in recent years, I think are extremely serious and ought to be inquired into by the Congress. On the issue of warrantless electronic surveillance, Congress still does not have a full and accurate view of what has gone on and what continues to go on with regard to what seems to me to be a clear violation of the terms of the Foreign Intelligence Surveillance Act by the administration. That's just one small area that I think Congress definitely needs to look into. Where they take it from there depends on what they find out, but it's certainly something that needs to be looked at.