The Canadian pop sensation talks about getting older (she's 22!) and what sets her apart from Britney Spears and Lindsay Lohan, in this interview and podcast. 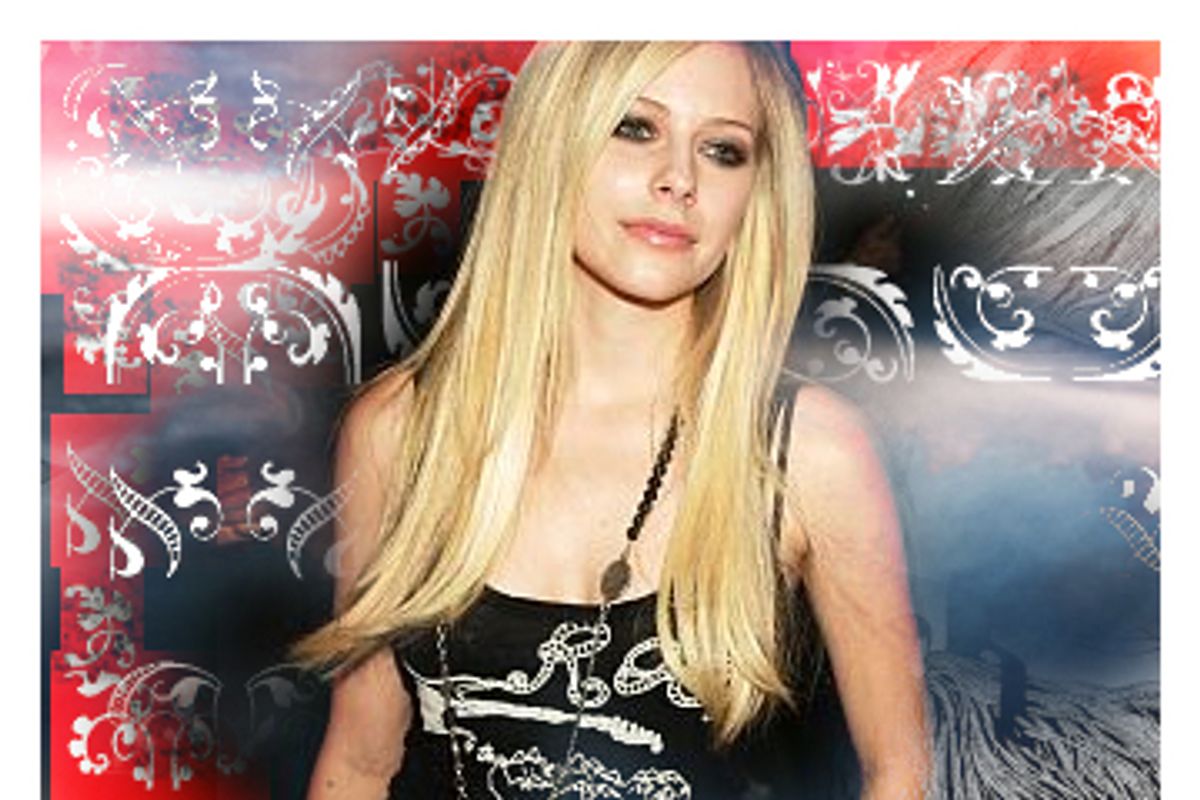 Avril Lavigne was only 17 when she released the debut album (2002's "Let Go") that made her a star and turned oversize ties into a must-have accessory. In the five years since then, she's released another multiplatinum album, toured the world, performed at the closing ceremonies of the 2006 Winter Olympics, provided the voice of Heather in DreamWorks' animated hit "Over the Hedge" and, oh yeah, she also married Sum 41 lead singer Deryck Whibley. With the imminent release of her third album, "Best Damn Thing," changes are again in store for Lavigne, who's enjoyed some time out of the spotlight as she worked on her music. Now, about to reenter the media circus, the 22-year-old native of Napanee, Ontario, spoke with Salon about her image change from punk to posh, her new music and why she's largely been able to avoid the problems that have befallen celebrity starlets like Lindsay Lohan and Britney Spears.

What would you say has changed the most for you in the time since your first album?

Well, in my personal life, I'm older and more settled. Being older in some ways -- you understand life and you know who you are. Now I know who I am and I understand life. It's easier. When you're a teenager, you're going through all these emotions and changing; you're growing and becoming who you're going to be. Just being older, more in control, I feel great.

How about your career?

Well, with the public, everyone talks about how I look different. I was 17 when my first album came out and I looked like a kid, I didn't look like a girl. I'm more feminine now -- naturally, duh. I'm still the same, just an older, more mature version. Still like the same kind of music, still have my old edge.

On your MySpace page, there's a quote from you about not having an A&R guy in the studio, and I've read how quickly the songs were recorded and how you took a hands-on role in making the new album. It sounds like making the album was a guerrilla, punkish production. But you're still always going to get people saying, "Avril isn't punk."

Well, first of all, I don't give a fuck what anyone says. I totally do my own thing and that's always been my message. I do what I do. I have a ton of fans and they love me. I was put here ... it was a purpose. I've touched people. I'm some people's role model. So what I'm trying to say is -- some people love me, some people hate me. That's fine. That's what it's like with anything. Chocolate bars: People love Mars bars, they hate them. The color black: Some people love it, some people don't like it at all. That's the way it is.

As far as the whole punk thing, I think people just pick up on my attitude and my character. Obviously my clothing style, my fashion sense, in some ways nowadays is referred to as kind of, maybe, sort of, punk fashion. By no means do I walk around saying I'm punk. I listen to punk music, I appreciate punk music. A lot of my favorite bands are in punk. Do I think I'm punk? No. What is punk? Punk is anti-everything. A way of life. Anti-establishment. I don't go by that.

Your question was why do people tie that to me. I guess it's just the whole fashion thing. And it's my attitude. It's my I-don't-give-a-fuck attitude. It's the way I talk and some people can put that label on me and because it's such a strong label, other people will go, "Oh no she's not." Everyone knows I'm this girl who speaks my mind, I have a strong personality. I am a certain style, a certain brand, a certain thing. I'm a strong image whereas some other girls are just singers. I'm like this person, I have a character.

You said you're here for a purpose. What is it?

This is what I was meant to do in this life. My music touches some people. I keep every single fan letter. I have all my fan mail in a storage room. I read my fan mail and it's like, honestly, my fans see me sometimes and they cry like, "You don't know what you've done for me." I knew a whole family who lost their son and he was my age. [My music] was the music they played at his funeral. They made a DVD about him and they all came to my concert and I cried onstage when I was playing it and they were up there in the bleachers crying. Everything happens for a reason. This is the purpose in my life.

You see people in a similar situation to yourself, people like Britney and Lindsay Lohan, who seem to struggle so much with the scrutiny and being under the spotlight all the time. Do you have sympathy for them?

First of all, you're talking about the whole Hollywood scene, paparazzi phase. I do everything I can to keep my personal life personal. I'm not a scene-y person. I don't go to all the red carpet Hollywood events like those kind of Hollywood girls do. I don't need that and I don't want that. I live in L.A. because I love the weather and I love how central it is. I'm happy here, but I stay away from that.

Do you think they attract that scrutiny on their own?

Are you talking about these girls being young and going to rehab because they're famous?

It's one thing to be stressed out by the attention, but then why keep showing up in public?

I've taken the last year off and I've been at home and I've lived a normal life -- although I've been working. I worked on a couple movies and shit like that and I wrote my record, but I'm low-key. I know when to come out and when to go away. I come out when I have a record coming out. Now I'm going to go out and get my picture taken all the time and do things. I think it's important to have balance. I think that helps with fame. Anything in life, balance is important.

How do you feel about the idea that your album might get leaked?

It will get leaked two months before it comes out and that's because Wal-Mart and all those stores get it two weeks before it goes on shelves or a week before and some idiot decides to put it on the Internet. It's nice if you can keep it, you gotta -- you have a release date for a reason. You build excitement around it and then it comes out and all the fans can run to the store and buy it. We all do our best. I have two copies. My family doesn't have a copy. My friends don't.

For the next two years your life is going to change.

I'm excited. I've been away for a while. I'm really energized and I'm dying to get back out there and explode! Have fun and play all the award shows and do David Letterman and shoot more videos and sing my little skinny white Canadian butt off!