What the death and burial of 16-year-old Nahid al-Shanbari says about Hamas. 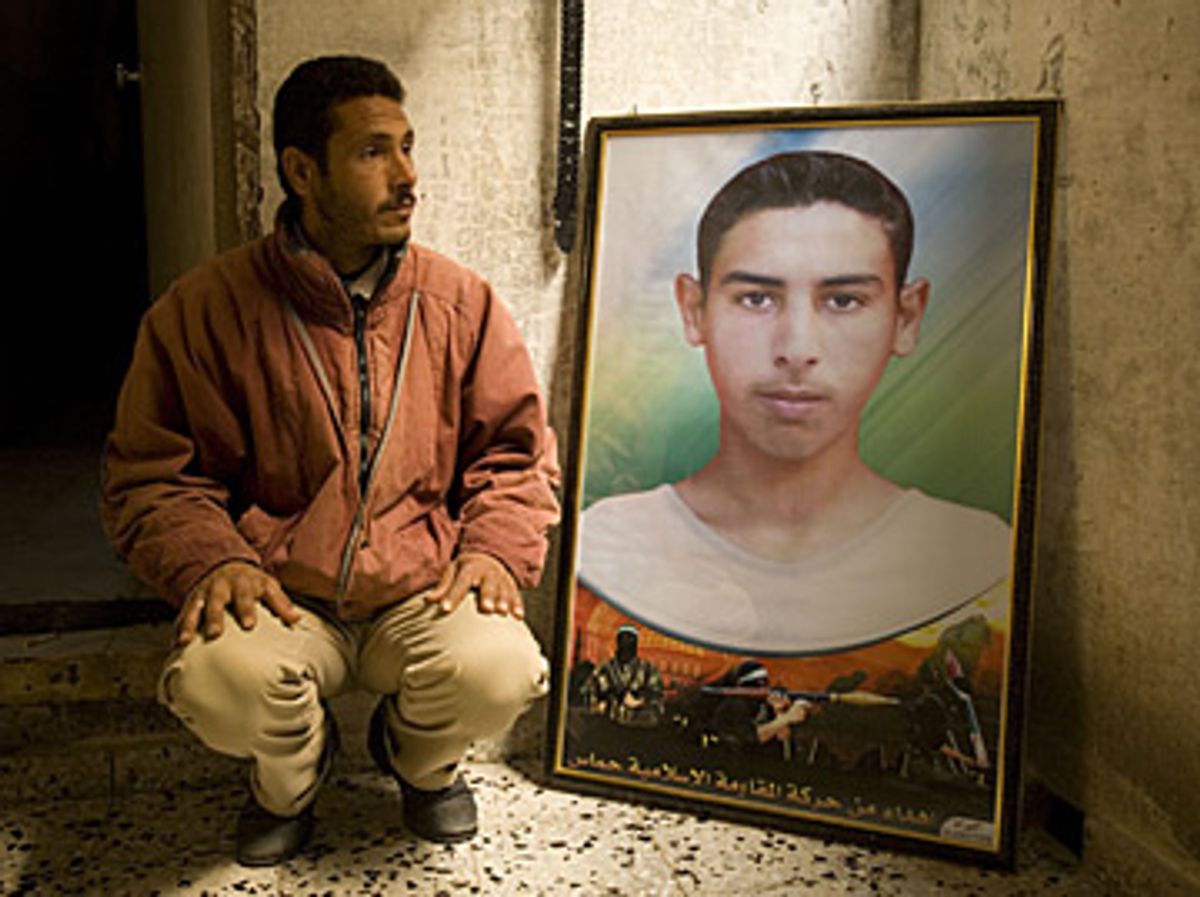 Hamas officially became the most powerful force in the Palestinian territories in mid-March, when a deal with Fatah established a unity government and ended months of sporadic armed confrontation between the two groups. The unity government was formed when the Saudis realized that Fatah, leaders of the Palestinian resistance for four decades, kept coming up on the losing end of those gun battles. Fearing outright victory by Iranian-backed Hamas, the Saudis stepped in to broker a cease-fire.

Before it proved itself militarily superior to Fatah, however, Hamas had already proved itself superior to its corrupt, fragmented rival in cementing support among the Palestinian public. Fatah became infamous for diverting foreign aid into the private offshore accounts of its leaders, while Hamas built its reputation funding education and healthcare. More than its militant Islamic fundamentalism, success in providing social services helped Hamas beat Fatah in parliamentary elections in January 2006, a crucial step in becoming the dominant force in the territories. An incident in the Gaza Strip shows how Hamas rallies popular opinion by steering help directly to the impoverished Palestinian public -- but also how the fortunes of any one faction are often only marginally relevant to the average citizens who bear the brunt of the ongoing conflict in Gaza and the West Bank.

Last summer, in the Beit Hanoun refugee camp in the northeastern corner of Gaza, local teenagers played lots of soccer. Like teenage boys around the world, the kids of Beit Hanoun followed the matches of the World Cup obsessively. Every day the boys would watch the games and then run out onto a dusty, rock-strewn field a kilometer from the fence that separates Gaza from Israel and mimic the moves of their favorite players.

Even after the final between France and Italy on July 9, the boys kept playing. They played despite the fact that the fields of Beit Hanoun, surrounded by clumps of trees and patches of alfalfa and onions, are the site of a more dangerous game. Gaza's militants use the fields to shoot Qassam rockets over the nearby fence, trying and nearly always failing to hit targets in the southern Israeli town of Sederot. The Israelis respond from placements just beyond the fence with tank and artillery "counter-battery" fire. Militants try to set up the rockets, launch them and then flee before the shells come hurtling back at them.

On July 11, militants fired rockets from the edge of the field while the kids of Beit Hanoun were playing soccer. The militants left, just before an Israeli missile came crashing down and killed three boys, Mahfouth Farid Nuseir, Ahmad Ghalib Abu Amsha and Ahmad Fathi Shabat, all reported to be 16 years old.

The locals had long asked the militants not to use the field as a launching pad because it endangered the kids. During the early summer of 2006, neither Hamas nor Fatah had used the field to fire Qassams, but not out of deference to neighborhood parents. They had agreed to a cease-fire with the Israelis and were, for the most part, observing it. The militant group Islamic Jihad, however, was not observing the cease-fire and often used the spot to lob rockets into Israel. None of the average citizens of Beit Hanoun had the wasta, the Arabic word for influence or clout, to get the militants to stop altogether.

Three weeks later, on July 31, militants again tried to use the field as a launching pad while Beit Hanoun's boys were playing soccer. They set up in a clump of trees and prepared to fire their rockets, but this time the Israeli tank shells came raining down before they could launch a single Qassam. An Israeli tank shell burst next to Nahid Mohammed Fawzi al-Shanbari and killed him instantly. Press reports gave his age as 16, and conflated his death with the earlier casualties on the same field, but though he was tall, lean and athletic, Nahid was actually only 12 when he died.

When a family member dies in the Palestinian territories, there's a three-day mourning period in which friends, relatives and just about everyone else around town comes over to sit with the family in support. And like any gathering of Arabs, this requires lots of tea, coffee and lunch. The funerals themselves, particularly when Israeli munitions are responsible for the death, can also become propaganda opportunities for whichever political faction claimed the allegiance of the deceased. In Gaza, nearly every family has at least a loose affiliation with one of the militant groups or political parties. Family and party affiliation is the source of jobs, education, income and status. It is not uncommon for the party to defray the costs of a funeral, since the price of tea and cakes and enforced hospitality can be hard for the average Palestinian in the camps to handle. A Palestinian without a party has no wasta at all.

Mohammed al-Shanbari, Nahid's father, had no wasta. An unemployed laborer who lost his job in Israel when the intifada began back in 2000, he had nine surviving children and two wives to support and really couldn't afford all those beverages and lunches. But his only party affiliation was with an obscure and long-dormant Marxist offshoot of the dimly remembered People's Front for the Liberation of Palestine, which gave him a tenuous tie to the present-day Fatah.

After his son's death, Shanbari went to officials of Fatah, the most powerful party in Beit Hanoun, and asked for help. Shanbari told them he considered his son a martyr to the Palestinian cause and needed a little money to put on a proper funeral. In return, Fatah would have the benefit of claiming Nahid as its own for propaganda purposes.

Fatah did offer to lead the funeral, complete with political theater to highlight the plight of the people of Gaza. But Fatah didn't offer him any money, in part, Shanbari suspects, because he belonged to the obscure PFLP subgroup and has never been that politically active anyway.

Shanbari went away empty-handed. And then the guys from Fatah's bitterest rivals, Hamas, showed up at his door.

Hamas offered to pay Shanbari $150 a month for three months if they could make Nahid a Hamas shahid, or martyr. Shanbari said yes. In exchange for the money, he permitted Nahid's image to become part of a poster. The 12-year-old's image was covered with Hamas logos and surrounded by masked fighters holding weapons. The posters were plastered all over the Beit Hanoun camp, where many of them remain eight months later, faded and torn amid the dozens of other tributes to slain militants that cover the walls and lampposts of Gaza. Hamas also handled the funeral, with its armed militants leading the procession, and paid for all the tea, coffee and lunch.

Hamas had once again proved itself better than Fatah in meeting the needs of the average Palestinian. What neither of the two leading factions in the occupied territories could or would do, however, was put a stop to the firing of rockets from the Beit Hanoun soccer field. They are still asking the militants to stop, just as they were before the deaths of the boys on July 11 and the death of Nahid al-Shanbari on July 31. "We beg them and beg them to stop," said one local man, "but they don't listen. And if we complain too much, maybe they will think we are informers for the Israelis."

A call to a Hamas activist elicited a denial about offering Shanbari money to claim his son for Hamas posthumously. He said if any such money was given to the family, it was merely humanitarian in nature. And when asked about the posters, he suggested, "this is how it is done. The people want to honor the fallen, and this is how we grieve the martyrs from the occupation." But he also refused to discuss the matter further. Other residents of Gaza said, off the record, that Shanbari's story did not sound unusual.

Mohammed al-Shanbari, meanwhile, said he accepted a deal from a group he doesn't even like or support. But he, alone among the wasta-less residents of Beit Hanoun, was able to stop the rocket fire. He used the $450 Hamas paid him to get his family out of the neighborhood altogether. He now lives in the Jabalya refugee camp. Unlike Beit Hanoun, with its pretty fields and trees, Jabalya is a crowded, unattractive jumble of brick houses and poorly paved streets burdened with trash heaps and crime. Hamas is, ironically, stronger in Jabalya than in Shanbari's old home. And he remains unemployed. But now he and his family live five kilometers southwest of the deadly soccer field. He no longer has to worry about rockets, just the occasional gunfight between Hamas and Fatah, or intermittent Israeli airstrikes on other houses in his new neighborhood.

"Hamas wanted to buy a martyr. I wanted a decent funeral and to get my family out of Beit Hanoun," he shrugged.