How Iran played the hostage "crisis"

The captured British sailors ate decent meals and were set free in business suits -- as Tehran used them to score political points on the Arab street. 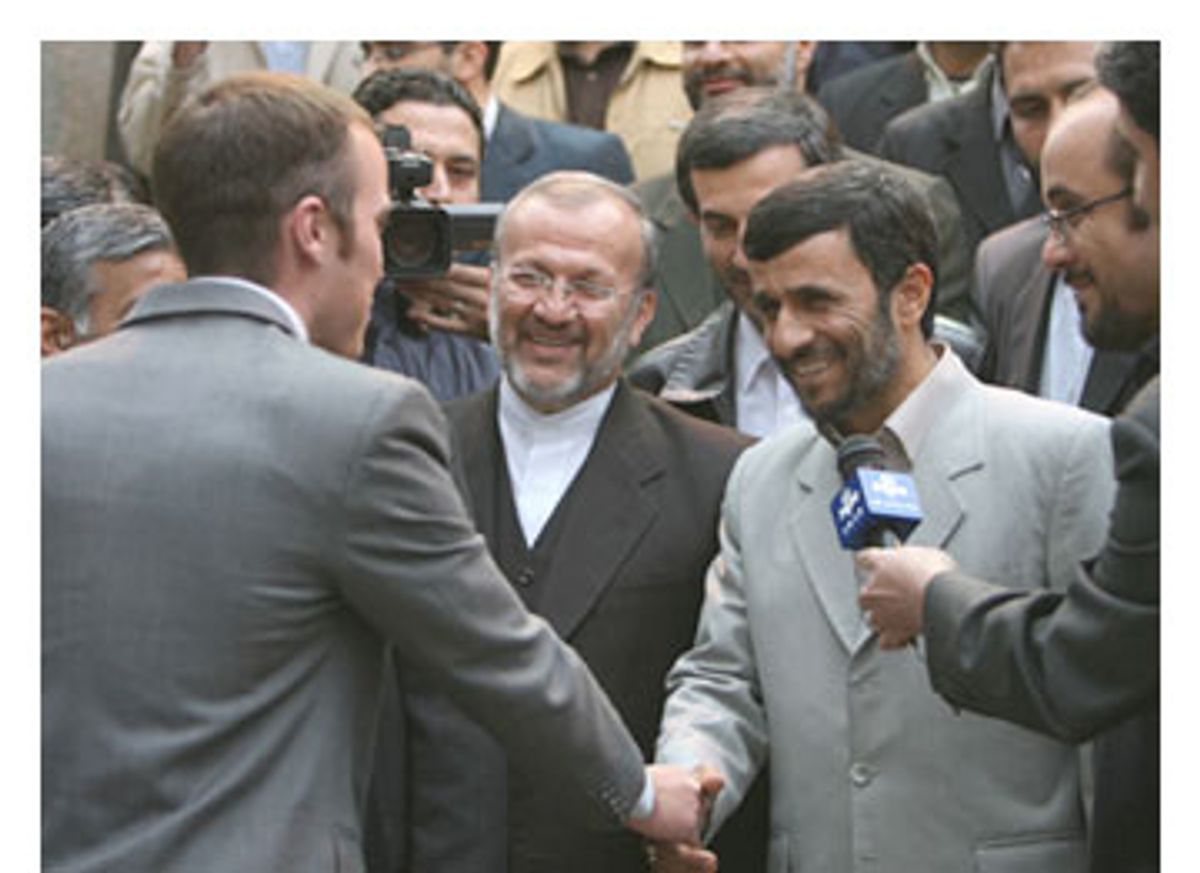 The so-called crisis over the Iranian capture of 15 British sailors and Marines in the Persian Gulf ended rather quickly, perhaps to the dismay of some who may have been looking for a prolonged standoff to provide a casus belli for armed intervention. The way the crisis started and why will be the subject of numerous analyses for days to come. But the way it ended -- as a "gift to the British people," in the formulation of Iranian President Mahmoud Ahmadinejad -- was Persian grandiosity at its finest, and a political victory for the beleaguered leader.

Most Iranians, including many in government, were on holiday when the British sailors from the HMS Cornwall were captured by a naval unit of the Revolutionary Guards on March 23. The Iranian new year, which begins with the official ushering in of spring and runs until its 13th day (coincidence, perhaps, that the British captives were freed exactly 13 days after the capture?), is a time when even the newspapers cease to publish. Tehran, one of the most crowded cities in the world, becomes a comparative ghost town. (Think Paris in August.) Some have suggested that Iran's seizing the British sailors was a premeditated move to rally popular support around the government, or to distract the population from other, namely nuclear, issues. But those notions were clearly preposterous to any Iranian observer; the fact that there was little coverage of the "crisis" inside Iran, at least early on, made that abundantly clear.

Though the Iranian government insisted from the start that the British sailors were caught in Iranian waters, curiously, President Ahmadinejad, never one to shy away from speaking on behalf of his nation, or even to make an issue his personal crusade, was conspicuously silent. That a week of the "crisis" went by before he made his first comments (and mild comments at that) showed who was really in charge: Supreme Leader Ayatollah Ali Khamenei. The Revolutionary Guards report directly to him, and whether or not Khamenei knew in advance of the military gambit, he was definitely calling the shots on this one and wanted no interference from presidential quarters.

And Khamenei is a master at the kind of game the British seemed to want to play, at least in the beginning: tough words, and an insistence on the veracity of their version of the events. The British maintained echoes of a colonial attitude, at least in the eyes of the Iranians, about their presence in the Persian Gulf, which the state-owned BBC referred to as the "Arabian Gulf" in its broadcasts -- an insult of the highest order to any Iranian, Islamic or not. When the British government went public with GPS coordinates of the captured boat and began discussions at the U.N. Security Council to condemn Iran's action, Iran's response was to put the British sailors on television.

It was an act that seemed provocative and self-destructive to many people in the West -- but was in fact quite brilliant in its execution. The Iranians showed the British captives on Iran's Arabic language satellite station, a station that hardly anyone inside Iran actually watches (very few Iranians speak Arabic). But its broadcasts are beamed to Arab countries across the region, where Iran has much support and sympathy among ordinary people.

And the message was clear enough: Iran was treating the British, hated though they are, very well -- unlike the way the British and Americans treat Arab prisoners, whether in Basra, Abu Ghraib or Guantánamo. No hooded or shackled prisoners here, certainly no humiliating human pyramids. In Iranian custody, the captives played chess and ate well. Upon receiving their freedom, they were attired in civilized-looking, albeit Tehran-made, suits.

The British sailors appeared to admit their trespass into Iranian territory on television without any visible signs of coercion. Many in the West may feel certain that the sailors' "confessions" were made under duress, but it should be remembered that even were the Arab street to believe that, their conclusion might well be that the British naval personnel were extremely weak, given that they were seen enjoying hearty meals and were not terribly nervous.

Either way, the Iranians were winning where it mattered. The Arab street was being reminded that the British, once hated as colonial masters in the region and now hated as servants of the U.S., were meddling in both Iraq and in Iran's territorial waters. And if the Arab governments were too timid to do anything about it, well, the Iranians weren't. Any downside to a reaction of disgust by Westerners at the display of the confessions was tempered by the knowledge that Iranian power and British weakness, even humiliation, was on display for the whole world to see.

And inside Iran, for those Iranians less preoccupied with vacation, the sense from the very beginning was that the British -- along with their bullying big brother -- are up to no good in the Gulf and more than deserved to be called out on it.

Iran also quickly saw an advantage to be gained, at a time of mounting threats by the U.S., Britain and Israel against its nuclear program, in showing that it is not toothless in the face of mightier and technologically superior forces in the Gulf. The relative ease with which the Revolutionary Guards made off with their captives -- amid a host of U.S. and British naval vessels almost bumping into each other in the shallow waters off the Iranian coast -- was doubtless a cause for celebration in Tehran. It also surely caused some worry among other Gulf states, those that depend on the U.S.-British alliance for their protection.

Within the corridors of power in Tehran there was undoubtedly much discussion on how to proceed with the "crisis." Ayatollah Khamenei's style, ruling by consensus, showed in the seemingly schizophrenic pronouncements coming from various government sources, both hard-line and pragmatic. But Khamenei's success lies in that very style; he will allow various competing parties a certain amount of freedom of opinion and action, and when he feels the time is right, he will quickly make a decision and have it acted on immediately, before anyone has a chance to object too strenuously.

It is hard to know exactly where Ahmadinejad stood on the issue up until his announcement that the sailors had been pardoned (pointedly not by him, but by "Iran"). But wherever Ahmadinejad stood earlier, he clearly wanted, in his vainglorious style, to be the person who delivered the good news of their release. The 13th day of the Persian New Year, Norouz, was on Monday, a day Iranians know as seezdah-bedar, traditionally a day to spend outdoors. That day, Ahmadinejad announced a press conference for Tuesday, the first real working day of the Persian year, a sign that there might be some news on the British captives as well as on Iran's nuclear program. The press conference was quickly postponed to Wednesday, indicating that either Ahmadinejad didn't have the Supreme Leader's approval to hold one yet, or that there was still some maneuvering to be done by him to ensure that he could be the one to make the announcement.

It is quite likely the decision to "pardon" the British captives had already been made on Monday; what remained to be worked out was how to extract maximum advantage for Tehran. Ahmadinejad, more often the angry, indignant or sometimes offensive public face of the Islamic Republic, was going to be allowed a heroic moment -- a moment he desperately needed at a time when even his conservative supporters are questioning his leadership.

Stories are told in the Middle East of the Prophet Mohammad's good deeds and his compassion, even for his enemies, and Ahmadinejad was going to be, Saladin-like, compassionate. The Iranians had made their point, and in a gesture of Shia Muslim magnanimity, after only 13 days of captivity, the sailors were going home in time for their very own Christian holiday of Easter.