Paul Newman's famous film character proved his manly mettle by eating 50 hard-boiled eggs in one hour. But when I tried to match him with Cadbury Creme Eggs, all I proved was my bad taste. 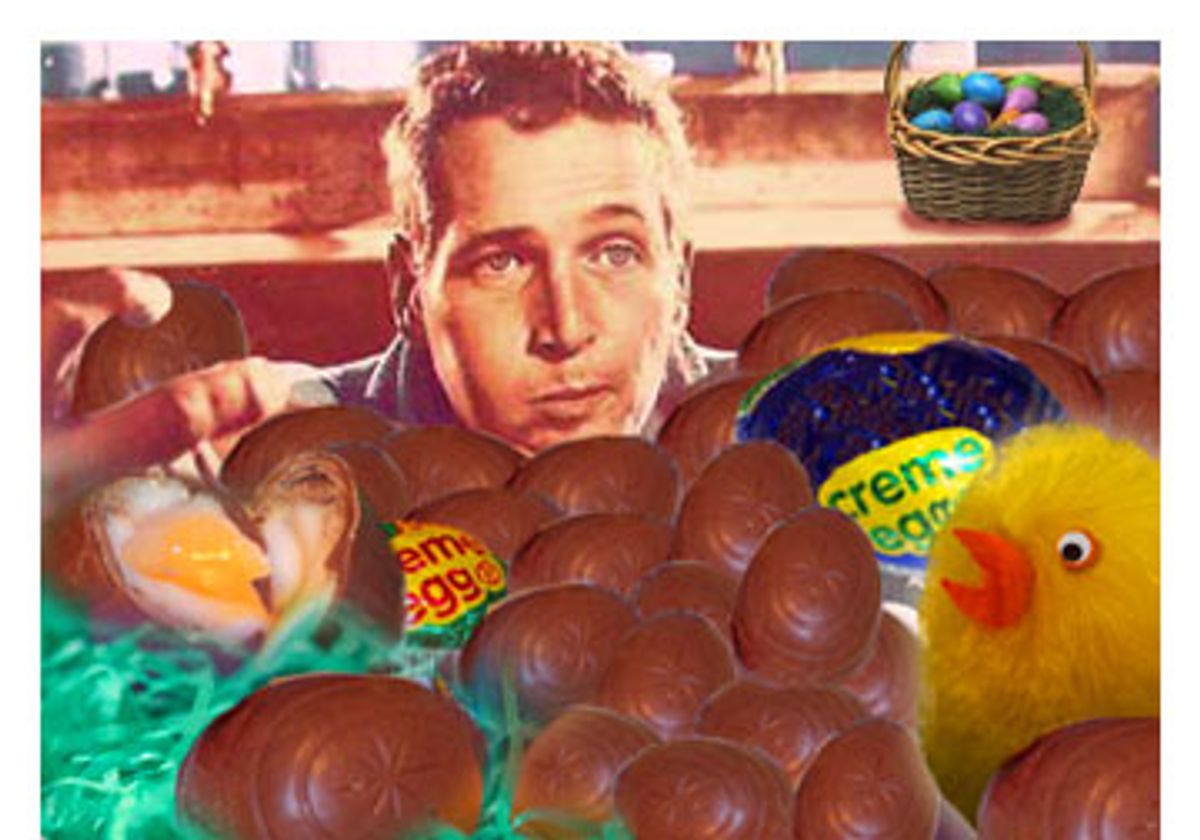 Every spring, in the aisles of some local hypermarket, my eyes attend, my nose wrinkles -- my very innards stand up -- at the sight and smell of a certain Easter treat, no doubt beloved by many, a product of the Hershey Co., the New World licensee of the Cadbury-Schweppes carbohydrate conglomerate. Let Proust have his buttery morsel, dipped in Aunt Leonie's lime-blossom tisane. My memory -- and my Weltschmerz -- are inextricably tied to a different scallop-ridged sweet: the Cadbury Creme Egg.

You know the one. You've had a bite perhaps, and taken a moment to admire the ingenuity of Britain's food scientists. (Invented in 1971, the thing is "still unique in the confectionery marketplace as the only product which closely resembles a real egg," crows the Cadbury Web site.) Then you've put the uneaten half down, maybe for later. You're no health nut, but you are a reasonable person -- and let's face it, a full ounce of sugar oozing from a cheap chocolate shell is hard to stomach. Maybe in your reckless youth you might have tried to down the whole thing. And of course, it's precisely there -- to my misspent youth -- that those foul yet seductive little sucrose bombs lead me, too.

As so many tales of humiliation do, this one begins during a college spring break. It was many years ago, in the innocent days before the founding of the International Federation of Competitive Eating and gross-out shows like "Fear Factor" began clogging the airwaves. A friend (I'll call him Satan) and I were killing time in a dormitory, watching a VHS of the old Paul Newman film "Cool Hand Luke." Those familiar with the film will remember the scene in which Newman, in the eponymous role, proves his manly mettle to the prison gang of which he is a member by eating 50 hard-boiled eggs in one hour. After he completes the feat, he lies shirtless and bloated, in an oddly cruciform pose, abandoned by the audience that so enthusiastically bet (mostly against him) during the frenzied ovo-orgy. A beatific smile crosses his face, evidence of some inner ecstasy, the nirvana of a man who has learned something about freedom despite his captivity. I watched his grinning face, and with confidence made of a fast metabolism plus a few beers, I said to my friend, "I could do that."

"I'm not sure I'd want to eat all that cholesterol, though. I have a family history," I objected, sounding less Newman-esque by the second. "What about an equal volume of egg whites?"

No go. Not as gross, he said. We wracked our brains to find an acceptably revolting, low-cholesterol substitution. I wish I could say that I understand how we reasoned that 30 Cadbury Creme Eggs would be a healthier equivalent to 50 chicken eggs, but I don't. Maybe marketing got us -- it was nearing Easter, and the Creme Eggs would have been in every store display. In any case, the die was cast. We set a date, two weeks into the future, where the scene would be reenacted, with skinny me in the role of buff Paul, and gooey, cloying Cadbury in the role of the incredible, edible egg.

I trained hard over those weeks. I built up my confidence, in a cafeteria montage worthy of the Rocky franchise. I had long prided myself on my eating abilities, associated them in my mind with an unconquerable lust for life (rather than, say, an absurd, gluttonous machismo). In the past, I had won taco contests, buffet throw-downs, refill wars. So I knew I had the will. Now I had to develop the way. I was spending two hours on every meal at the dining hall. I charged up my tray four, five times, totaling what must have been 3,000, 4,000 calories in a sitting. My stomach was enormous.

Word was getting around, too; ours was a small campus. My friend Satan seemed bent on re-creating the scene exactly, down to the jeering, predatory onlookers. On the appointed day, 20 or 30 people showed up to watch, some total strangers. A betting pool was established. Satan insisted I take off my shirt. The eggs were lined up, unwrapped, and placed in egg cartons. Only two and a half cartons -- they looked so small. So easy. I had a huge jug of water handy, the only drink permitted. The plan was to down one egg every two minutes. It hardly seemed like a challenge.

After the first one, they no longer tasted good. After the third, they were unpleasant, and I was worried. After the seventh, they were repulsive, and I feared humiliation. Merely wafting the chocolate within an inch of my nose provoked a bodywide gag reflex. I had to run for the bathroom around the 13th -- but as Satan, who attended to his role as rule monitor with diligence, will attest, I kept the eggs down. I tried not to move. Eventually, I hobbled back to the lounge, where the mood had swung from wild to worried, and I saw my pitiable state reflected in my audience's faces. Nausea became vertigo. I could not stop shaking. Stop, they pleaded. I will not, I said to myself. At that point, I was still on pace. Thirteen Creme Eggs, 26 minutes.

For the remainder of the hour, I managed to eat and keep down two more, exactly half of the goal. Still I felt rather proud. It is amazing how readily the human psyche will accept lowered expectations. The bettors, who now felt guilty about any involvement in this sick debacle, had already begun to slink away. Satan refunded the winners, the faithless ones who bet against me, and closed my hand over the rest of the money, as a gesture of pity and contrition. I think it came to about $14. It is a testament to how low I had been laid that I took the money. The full extent of my naiveté had yet to be revealed, however. I would have been better off vomiting.

I'd thought the challenge was a matter of indomitable will, of the rebellion of the gut, and by extension the man, against the confinements of the "normal." I thought it was a matter of simple volume, of proving that man was bigger, of spirit and of stomach, than the world took him for. But I was wrong. Fifteen Cadbury Creme Eggs add up to only 2,250 calories: no problem. Those calories are provided, however, by 375 grams of carbohydrates, 330 of them sugars, and 75 grams of fat, 45 of them saturated. (It is worth noting, as an aside, that they contained less than 75 milligrams of cholesterol -- not even 15 percent of what the FDA says you can eat in one day.) In the end, it was the one-two punch of sugar and fat that did me in, and that would have defeated any amount of stomach capacity and sheer desire. The fat, with its potent, sickly, chocolate odor, would not let me forget what I was doing while I was doing it. And the sugar made sure I paid for what I had done long after I had stopped. A diabetic friend recognized my symptoms as hyperglycemia: uncontrollable jitters, intense thirst, fatigue, confusion and numbness, then pins and needles in the extremities. Satan's punishment for enabling this horror was to spend the day's remaining hours walking me around the campus, trying to help me burn some of those calories and regain control of my body and mind.

In the years since, the story has been retold many times, by me and by others. I used to finish its telling with a flourish of face-saving braggadocio, challenging any man alive to finish more than 15 of those damn eggs in an hour. But I know better now. The world -- and the Web -- is lousy with more seasoned stomach-stuffers. Surely someone can do it, and will. Sonya "the Black Widow" Thomas has already put Cool Hand Luke to shame, downing 65 hard-boiled eggs in six minutes and 40 seconds. Gawker.com recently chronicled a shockingly similar (and independently conceived, from what I can tell) contest wherein two Maxim interns each attempted 50 Creme Eggs, though they had all day to do it (and failed as miserably as I).

People who hear the story, or who were present at its making, often ask whether I've been able to come within 10 feet of a Cadbury Creme Egg since then, and they're always surprised to hear that I have. I've eaten maybe three or four over the years. My senses are forgiving. It's the memory that isn't. Food has always had a central role in my life, and since college I've eaten at Michelin-three-star restaurants, cooked professionally in high-end kitchens, and tried to work out how, with moderation and simplicity, to connect the act of eating and the pleasures of free will, Michael Pollan-style.

These days, when I eat, or see, or smell one of those choco-abominations, I am reminded not only of how young and dumb I once was, but of how even our most asinine challenges, our most trivial, most physical experiences, are now wrapped up in the multicolored foil of factory packaging. Cool Hand Luke achieved a bliss of self-mastery with good old natural eggs. Proust ate hand-baked madeleines and recovered an authentic moment of experience and sensory glory, tinged with universal loss. Me? I found minor infamy by gorging myself on empty calories developed in a laboratory, whose ingredients contain the word "artificial" no fewer than three times.

Most of the year, then, I wish that my tale of youthful hubris and pointless, world-chomping aspiration could be about eating real eggs, perhaps poached or soft-boiled. Or even better, about a classic French pastry with a debonair name -- madeleine, eclair, canéle -- downed with coffee in Voltairean proportions. But around Easter time, every year, I submit to the memory, however sophomoric, however abject, and I nod to that perfect oval of nastiness, the Cadbury Creme Egg. Because sometimes, memory itself is the guilty pleasure.

I. Chang lives in Los Angeles.

MORE FROM I. Chang