What was Charlie Crist thinking?

Why did a Republican governor just add tens of thousands of Democrats to the voter rolls in Florida? 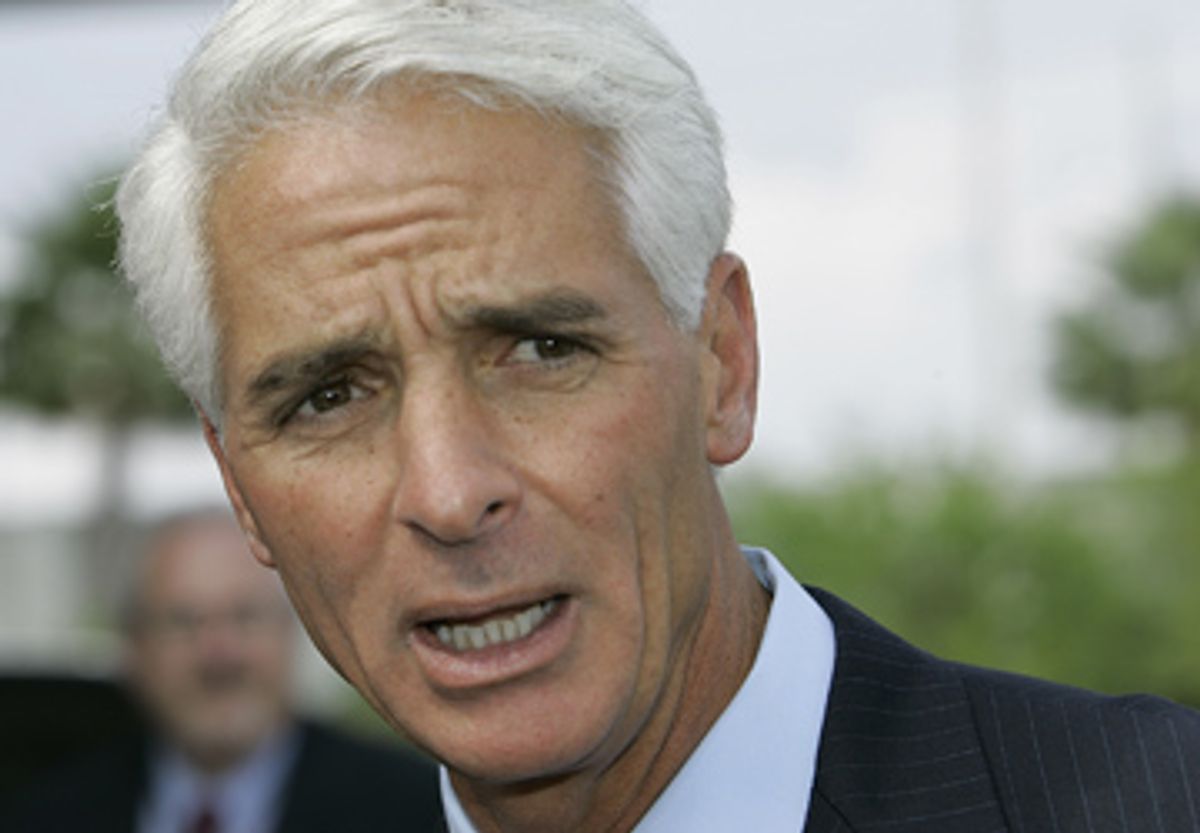 During his campaign for the Florida governorship last fall, Charlie Crist frequently expressed deep moral opposition to the state's practice of permanently prohibiting convicted felons from exercising their right to vote. But Crist is a Republican, and his promise to fix Florida's notorious felon-voting ban sometimes sounded like nothing more than campaign puffery. Felon disenfranchisement has long given Republicans a considerable boost at the polls in Florida; if the state's ex-cons had been allowed to vote in 2000, George W. Bush would now be the commissioner of baseball. Was Charlie Crist really going to kill this political golden goose?

On Thursday, he did just that. Crist, who became governor after handily defeating Democrat Jim Davis in November, ushered in a proposal that will quickly restore the voting rights of most of Florida's felons as soon as they are released from prison. The plan looks sure to alter the political landscape in the nation's most populous -- and electoral-vote-rich -- swing state.

"This is going to have a very big impact," says Christopher Uggen, a sociologist at the University of Minnesota who is coauthor, with Jeff Manza, of "Locked Out: Felon Disenfranchisement and American Democracy." Voting-rights activists say that there are about 950,000 felons in Florida who have served their time but are currently ineligible to vote -- making up roughly 9 percent of the state's voting-age population, and more disenfranchised felons than in any other state. The ex-cons belong to traditionally Democratic demographics -- many are African-American, and many are poor. If they're allowed to vote, they'll likely go to the polls at lower rates than everyone else; Uggen and Manza's work suggests felons turn out to vote at about the half the general turnout rate in any given election. But in a state as closely divided politically as Florida, that could still make all the difference. In the past several decades, say Uggen and Manza, at least two Senate races in Florida would have gone to Democrats instead of Republicans had felons had the right to vote. Buddy McKay would have beaten Connie Mack in 1988, and Betty Castor would have beaten Mel Martinez in 2004. And, of course, the 2000 presidential election would have gone to Al Gore. Uggen and Manza's research suggests Gore might have picked up 60,000 votes from felons.

By restoring ex-cons' rights, in other words, Florida's new Republican governor has added tens of thousands of Democratic voters to the rolls -- possibly pushing a House seat or two into the blue column, certainly making life a little bit easier for Hillary Clinton, Barack Obama or whoever else wins next year's Democratic presidential nomination.

Crist's move is all the more remarkable when you consider the political backdrop behind the fight for voting rights in America. In an attempt to prevent what they call "voter fraud," Republicans have long called for measures that restrict traditionally Democratic voters' access to the polls. The Bush administration's Justice Department has pushed regulations requiring people to show identification when they vote, and it has moved to aggressively punish alleged fraud -- an effort that contributed to the firing of some of the U.S. attorneys for which the administration now finds itself under fire.

In Florida, Republican officials have shown particularly naked disdain for voting rights, using the felon database as a cudgel with which to disenfranchise large classes of voters. In 2000, thousands of people who were qualified to vote were turned away from Florida's polls because their names were erroneously purged from voter rolls; they weren't felons, and were possibly model citizens whose only crime was having a name similar to that of someone else who'd once committed a felony. In 2004, the same thing nearly happened again. Nevertheless -- or maybe as a consequence -- Jeb Bush, Crist's predecessor in the governor's office, remained a strong believer in restricting felons' rights.

Why would Charlie Crist change the game? The simplest answer, says Uggen, is "courage and principle." He points out that activist groups like the American Civil Liberties Union have led the fight to change state felon-voting laws across the country. But their efforts have been stymied, especially in Florida, where the felon-voting ban is constitutionally sanctioned. Only a governor could have done away with it, and Uggen notes that a Republican governor might have had more political room to maneuver on the issue than a Democrat. Any Democrat who moves to restore felons' voting rights "becomes instantly vulnerable to the charge that it's a naked power grab," he points out. Still, in Maryland, the Democratic-led Legislature has just passed a bill loosening restrictions on felons' right to vote; Democratic Gov. Martin O'Malley has said he's leaning toward signing it.

Crist's personal popularity in Florida has also helped. Since taking office in January, Crist has had an extremely good run in the governor's office. He pushed through a popular measure to lower property insurance rates, and he's looking to do the same for property taxes. Crist also banned touch-screen voting in the state. A recent poll put his approval rating at an amazing 73 percent; even Democrats in Florida overwhelmingly approve of his performance. Republican presidential candidates have been wooing him, calling him a "new Republican" who's cultivating a broader base. Restoring felons' voting rights certainly falls in line with such an effort -- as Uggen notes, it could end up helping Crist, too. When he runs for reelection, perhaps tens of thousands of people who would never have considered voting for a Republican will cast a vote for the governor who finally gave them their rights back.

The governor and three other state officials -- Republicans Bill McCollum, the attorney general, and Charles H. Bronson, the agriculture secretary, and Democrat Alex Sink, the chief financial officer -- make up the Florida Board of Executive Clemency, which has responsibility for restoring civil rights to ex-convicts. To change clemency procedures, Crist needed the support of at least two of these members. Sink favored restoring felons' rights, but Bronson and McCollum have long been opposed. (McCollum's name may be familiar from his role, while a Republican congressman, in the impeachment of President Clinton.) McCollum was not to be swayed, but Crist courted Bronson, and finally won him over by promising to exempt some felons from automatic restoration of rights. Under the plan, murderers and sex offenders will have to apply to the state board to get back their voting rights, and people who've been ordered to pay restitution to their victims must be fully paid up before they can vote.

Such restrictions have irked activist groups. Howard Simon, director of the Florida chapter of the ACLU, says he's concerned that people who were released from prison years or decades ago might encounter bureaucratic difficulties in trying to win back their vote. Simon is also considering legal action to fight the requirement that felons pay restitution before they can vote, and says that the ACLU would have preferred if the governor had allowed all ex-felons -- regardless of their crimes -- to vote. "I think that fairness requires it," he says.

At the same time, Simon appreciates Crist's efforts. "I just got back from talking with the governor, and what he said is, 'I'm doing what is doable,'" Simon says. He adds, "If this gets implemented as the governor has indicated to me, it looks like the most significant addressing of the voting rights and civil rights crisis here in Florida maybe in the last 30 years."