Injured troops shipped back into battle

Salon has uncovered further evidence that the military sent soldiers with acute post-traumatic stress disorder, severe back injuries and other serious war wounds back to Iraq. 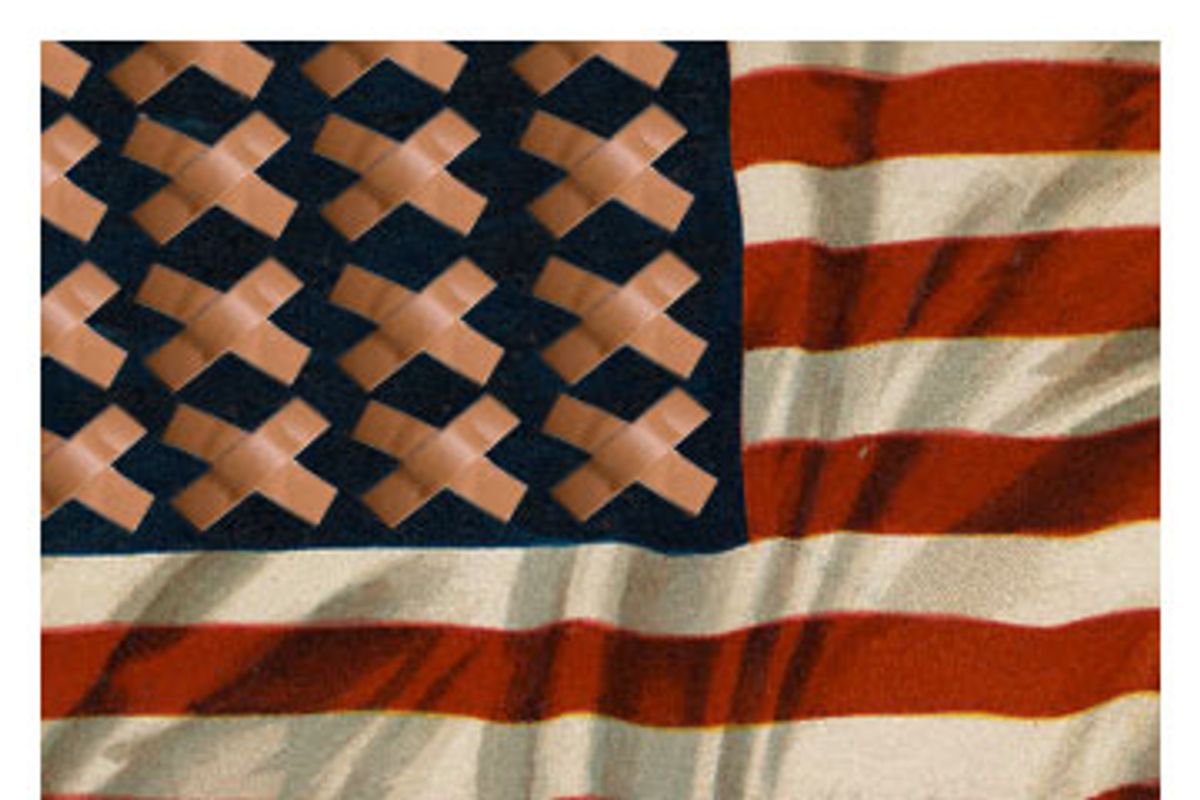 On March 9, Army Spc. Thomas Smith was ordered to board a plane from Fort Benning, Ga., to deploy back to Iraq, even though he was known to be suffering from chronic post-traumatic stress disorder from a previous tour there. Only weeks prior, military doctors determined that Smith should not be allowed around weapons because of his PTSD symptoms, which included bouts of sudden, extreme anger. Smith's medical records, obtained by Salon, also show that doctors had "highly recommended" that Smith not be deployed because of his condition.

But that did not stop Smith's commanders from ordering him to Iraq as his unit, the 3,900-strong 3rd Brigade of the 3rd Infantry Division, was rushing to move out as part of President Bush's so-called surge plan for securing Baghdad.

"I was told to have my bags in at midnight that night," for the flight, Smith said. "I was sitting there looking at these letters in my hand from my doctors," he recalled in a telephone interview. In order to follow the doctors' recommendations, Smith said, "I had to check myself into the hospital." He avoided the flight by just a few hours. Smith's condition was serious enough that the doctors there kept him hospitalized for nearly two weeks.

On March 11, two days after Smith checked himself in, Salon reported on claims by numerous soldiers from Smith's brigade that commanders were pressing injured troops to deploy to Iraq. Soldiers at Fort Benning said that two doctors from the division met with 75 injured soldiers, including Smith, on Feb. 15, in what the troops said was an effort to reevaluate -- and downgrade -- their health problems so that they could be deployed with the rest of the unit. In several cases, medical records provided to Salon supported those allegations, showing the soldiers to be healthier, on paper, than they were prior to that meeting.

It remains unclear how many injured troops from the 3rd Brigade were deployed last month. But others continue to come forward who, like Smith, had serious medical problems and narrowly avoided being shipped back to Iraq. The concern of these soldiers is not only that they could worsen their injuries by being deployed, but that they could also be a danger to themselves and the soldiers around them. Their stories add new evidence to accusations that brigade commanders, in desperate need of more troops for the surge were willing to deploy broken soldiers.

Hunter Smart, who until recently was a captain in the 3rd Brigade, has experience preparing unit status reports. These detailed accounts showing how many soldiers in a unit are able to deploy to a war zone, make their way up to decision makers in the Pentagon. Smart says he believes brigade commanders were manipulating the reports and pressing injured soldiers to deploy to Iraq. "The unit status report is a big deal," Hunter explained in a phone interview. "You list by name and number the number of soldiers that are hurt and non-deployable," he said. "There was a concerted effort to keep those numbers down."

Smart was caught up in those efforts himself. He had suffered a back injury during a previous tour in Iraq when his Bradley Fighting Vehicle crashed, and his injuries were so severe, the Army finally allowed him medical retirement last month, after determining he was no longer fit to serve.

Medical retirement from the Army is a lengthy, paperwork-intensive process, one that had started for Smart last December. But to his astonishment, Smart's commanders pushed to deploy him in March, even as the paperwork for his medical retirement was working its way through the bureaucracy. "They were definitely wanting me to be deployed," Smart said. "Up until a few weeks ago, I was set to go on a plane," he said.

Smart saved an e-mail exchange in which his battalion commander, Lt. Col. Todd Ratliff, suggests that if the paperwork for Smart's medical retirement was not complete when the unit deployed, Smart might be forced to come along. "If for some reason you are still around when we deploy there is a chance we may take you to support us in Kuwait," Ratliff wrote in an e-mail to Smart on Feb. 16.

Smart fought against his redeployment, using the resources available to him as an officer to carefully shepherd his medical retirement papers through the Army bureaucracy just in time. But the experience left him worried about injured enlisted soldiers who were not so lucky -- and left him furious at those in charge. Military commanders "could care less about the soldier's physical and mental welfare, as long as they can shoot straight," Smart said. "Our military is stretched to its breaking point," he added. "Commanders are being backed into a corner in order to produce units that on paper are ready to deploy. They are casting the moral and ethical implications -- and soldiers -- to the side."

Smith, the enlisted soldier who was hospitalized, began noticing symptoms of his PTSD within months of returning from Iraq in January 2005, a tour that included significant time in Ramadi, a hotbed of the insurgency. It was nasty, face-to-face work, Smith said, which included a lot of "kicking down doors."

Smith's medical records are sadly typical of soldiers beset by PTSD. His doctors have documented agitation, irritability, anxiety, nightmares, flashbacks and a heightened startle response. He has a hard time going out in public. "My family had noticed some big differences with me," after his tour in Iraq, he recalled, including his sudden, intense anger. "They said, 'Hey, you need help.'"

His records show him struggling with his symptoms as the brigade was gearing up to deploy. On Feb. 8, several military doctors completed a "report of mental status evaluation" on Smith. "It is highly recommended that patient be placed on non-deployable status and have no access to weapons," the doctors wrote. On Feb. 20, another doctor circled "violence risk" on another of Smith's health-assessment forms.

But two weeks after that violence-risk notation, Smith found himself just hours away from stepping on to a plane to Iraq. He was running out of time and options. His company commander had already gone to bat for him, with no luck. Smith claims that on two separate occasions, his company commander took his doctors' notes to the brigade commander, Col. Wayne W. Grigsby Jr., in an effort to persuade Grigsby to leave Smith behind in doctors' care. "I've got to hand it to my company commander for trying," Smith said. But Smith said his company commander told him that Grigsby wouldn't budge. Smith resorted to checking himself into the hospital.

Privacy rules restrict what Army commanders can say about an individual soldier's medical file. Public affairs officials for the 3rd Infantry Division did not respond to questions for this report on the plight of soldiers who were deployed with injuries. The division surgeon, Lt. Col. George Appenzeller, confirmed in an interview last month that medical officials met with 75 soldiers on Feb. 15. However, Appenzeller maintained that it was to conduct medical exams, update paperwork and make sure injured troops were getting the best healthcare possible.

Grigsby, the 3rd Brigade commander, said in an interview last month that the well-being of his soldiers was among his top priorities. He did not deny deploying injured troops, but he asserted that the injured soldiers who were deployed were to be confined to relatively safe jobs. He said those troops would work in a capacity that strictly followed each soldier's "physical profile," a document prepared by doctors spelling out a soldier's physical limitations.

But one injured soldier who was deployed to Iraq in March wrote in an e-mail to Salon that her back condition has worsened significantly. "Now my left leg has started to go numb and they are telling me to double up on my meds, which I can't," she wrote. "They are not putting us in safe jobs at all. I still wear all of my gear and by the end of the day the pain is more than unbearable," she added. "I break my [physical] profile pretty much on a daily basis. At this point I will either go back [home] in a wheel chair or paralyzed or worse."

"Do what you can," she pleaded in the e-mail, "for the [injured soldiers] that come after me."

As Salon revealed in a second report on March 26, the commanders of the 3rd Brigade shipped dozens of injured soldiers to Fort Irwin, Calif., in January as the brigade conducted a month of desert-warfare training. The injured soldiers were put up in two large tents, doing odd jobs and biding their time. Some military experts said they believed commanders were attempting to artificially boost manpower statistics by making it appear that a healthier percentage of the brigade was out in the desert training for Iraq deployment.

Both Smith and Smart were among the dozens of soldiers who spent weeks in those tents. Neither could properly train. Smith had already been diagnosed with PTSD at that time, and would awaken at night agitated by the sound of mortars going off in the desert that were used for training. Neither Smith nor Smart was treated for his medical problems while in the desert.

In Smart's case, that went directly against the recommendations of his doctors. "I believe taking a month off from his treatment plan will be detrimental to his condition," one chiropractor wrote in Smart's file in late December. "Lack of treatment for this prolonged period of time could cause a setback in his condition that may be difficult to recover."

Military families are angered by the treatment of injured soldiers based at Fort Benning. Janie Smith, Thomas' mother, says she was horrified that the Army tried to send her ailing son back to Iraq, which prompted her to contact the media about his predicament.

She described him as an outgoing, personable boy. But the 26-year-old man who came back from Iraq is quiet, withdrawn and sometimes suddenly, frighteningly angry, she says. In a restaurant, he sits facing the door, ready to confront an enemy at any moment. His hands constantly shake. "He is an entirely different person," Janie explained in a phone interview.

Janie said she was glad when her son first joined the Army. "I was really proud of him," she recalled. But while she is still proud of her son, her feelings for the Army have changed. "They don't care," she said. "I don't know what I'm going to do now."

The Army's inspector general and the Government Accountability Office have both launched inquiries since Salon first reported on the deployment of injured troops. There is no indication of when either will issue its findings.