His rosy statements about Iraq were aimed at GOP primary voters, but they suggest the would-be president doesn't understand the war he'd be fighting. 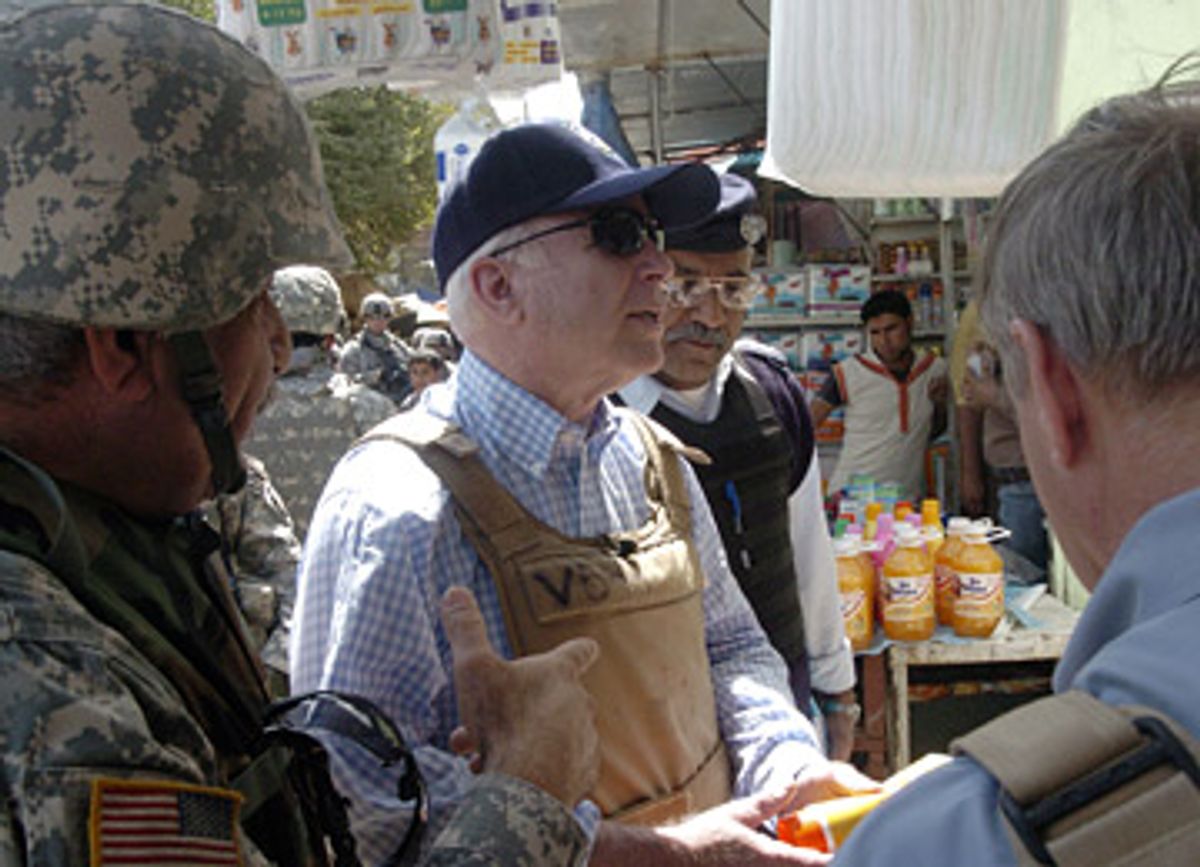 On Sunday, April 8, Sen. John McCain appeared on CBS's "60 Minutes" in an attempt to do damage control. Pressed on his assertion, in a CNN interview last week, that Gen. David Petraeus goes about Baghdad in an unarmored Humvee, he admitted that he was wrong. "Of course I'm going to misspeak," he observed, as though he could put the controversy behind him with weasel words. But he did not actually back off his recent sunny pronouncements about the situation in Iraq. "I believe we can succeed, and I believe the consequences of failure are catastrophic."

In the past two weeks, McCain has produced a trove of Iraq-related images and quotes that are sure to dog his faltering bid for the presidency. On March 26, during an interview with conservative radio host Bill Bennett, McCain said, "There are neighborhoods in Baghdad where you and I could walk through those neighborhoods today." The next day, he insisted to CNN's Wolf Blitzer that Gen. Petraeus was driving around armorless. Then, on April 1, in an attempt to back up his words, McCain went on his infamous Baghdad shopping trip. The Internet was soon awash with mocking photos of McCain strolling blithely through the Shurja market in a Kevlar vest. On Sunday, "60 Minutes" ran footage of McCain dickering over a rug with a merchant, then pulled back to show the senator surrounded by heavily armed and armored U.S. troops, and also mentioned that attack helicopters were hovering overhead. In the past year, only the image of Israeli Minister of Defense Amir Peretz looking out on the battlefield through binoculars with the caps still over the lenses has made a politician look more foolish.

Any Republican running for president must face the fact that a year and a half out from November 2008, two-thirds of likely GOP primary voters still back President Bush on Iraq. Having been beaten by Bush in the primaries in 2000, McCain's strategy now seems to be out-Bushing the competition by insisting that "things are getting better in Iraq." He is targeting precisely those remaining voters who keep telling pollsters Bush is "doing a good job in Iraq." But by reaching out to the faithful, McCain has exposed himself to ridicule from everybody else. Four years after the fall of Baghdad, he still doesn't seem to understand the facts on the ground.

First of all, contra McCain, there is no evidence that things are getting better in Iraq. The Nouri al-Maliki government began implementing the U.S.-directed "surge" --what is known in Iraq as "the new security plan" -- in late January. While deaths decreased in Baghdad itself, especially killings by sectarian death squads, other sorts of violence increased in the capital, including car bombings and mortar attacks. And the guerrillas, melting away before the expanded U.S. presence in the capital, simply did more killing in other places, especially to the north and west. Iraqi government officials admitted early last week that while in February, 1,806 persons were killed in political violence nationwide, in March the number rose to 2,078. Allowing for the greater number of days in March, the daily death toll still climbed slightly, from 64.5 deaths a day in February to 67 last month.

Horrific attacks continue in Iraq. On April 8, six U.S. troops died, four as a result of a roadside bomb in the violent Diyala province. In Ramadi on April 6, a truck bomber unleashed chlorine gas, killing 30 persons and wounding or sickening nearly 100. Dozens of Shiites have been kidnapped in the past week in regions around the capital, and many have since shown up dead. On April 7, there were at least five roadside bombings in Baghdad, several neighborhoods of the capital were hit with mortar or rocket fire, and the bodies of 12 people killed by sectarian death squads were discovered by police. In the city of Baquba, an hour northeast of the capital, 27 bodies were discovered on April 7, and in the northern Turkmen city of Tal Afar, trumpeted as a success story by George W. Bush, 11 corpses were found in the streets. And on April 2, the day after McCain's photo op in Baghdad, some of the merchants from the largely Shiite market he had visited were murdered. They had gone north looking for work when they were ambushed and killed by Sunni Arab guerrillas.

The al-Maliki government still appears paralyzed politically. Its Cabinet approved a new oil law with provisions for fair revenue sharing among sectarian and ethnic groups, but the Parliament has balked at taking it up. There has been no practical movement in Parliament for revision of "de-Baathification" measures that resulted in the firing and marginalization of tens of thousands of Sunni Arabs who once belonged to the Arab nationalist Baath Party, but who otherwise have not been found guilty of any wrongdoing.

The week before McCain asserted that Americans could walk around freely in some Baghdad neighborhoods, guerrillas had killed two Americans with a rocket attack on the Green Zone, the supposedly safe compound in downtown Baghdad that houses the U.S. Embassy and Iraqi government offices. In the aftermath, the U.S. Embassy issued instructions that all personnel moving between buildings in the Green Zone were to wear combat helmets and other "personal protection equipment." Most reporters covering Iraq can remember a time when U.S. government personnel in the Green Zone could lounge safely by the pool. A week after it became official that such sunbathing would have to be done in steel helmets and Kevlar vests, McCain chose to tell Bill Bennett how safe it was to take a walk in the Red Zone.

In fact, however, McCain's howler about a safe, leisurely stroll through Baghdad is only the most publicized of the many questionable statements he made during his chat with Bennett. The whole interview is worth unpacking for what it reveals about this would-be president's misunderstanding of the central foreign policy issue of the day. He doesn't seem to grasp what he would be getting into as commander in chief.

McCain began by attacking Democrats in Congress for proposing what amounted to a retreat at a time when the U.S. military was finally making progress. He complained that none of the Democrats has been honest about what would likely happen in the aftermath of such a withdrawal. "We will see chaos and genocide in the region and we will be back and they will follow us home," he roared. He added, "I would much rather lose a campaign than lose a war."

For McCain, the conviction that the U.S. military is now turning things around only underscores Democratic fecklessness. "We've got a new general; we've got a great strategy. Can't we give it a chance to succeed?" he told Bennett. Moreover, McCain asked, if the U.S. pulled out, what would happen next? The radio host tried to help McCain with his own historically dubious answer. "We saw in 1975 what happened," said Bennett. "We may be doing a replay of that now."

McCain was not satisfied with the evocation of a lost war in Indochina. He became animated, replying, "The difference is that the Vietnamese didn't want to follow us home. These guys want to follow us home. Listen to Khalid Sheikh Mohammed's statements in his confession down in Guantánamo. Look at [Abu Musab al-]Zarqawi, look at bin Laden, look what these people say. It is not Iraq they are after, my friend. It's us. And this is a seminal moment."

With that line of reasoning, McCain revealed that he has no grasp whatsoever of what is going on in Iraq or what is at stake in a U.S. disengagement. The Iraqis do not want to follow the U.S. home any more than Gen. Vo Nguyen Giap did. The war in Iraq never was and is not now, in any significant way, connected to al-Qaida, Osama bin Laden or Khalid Sheikh Mohammed. The U.S. is fighting 50 guerrilla cells in Iraq. Most of them are Sunni Arab Iraqis. Some are Baathist or ex-Baathist nationalists. Some of are Sunni Muslim revivalists or Salafis. Some are tribal, others based in the cities. They are uninterested in bombing Tucson, Ariz.. They want U.S. troops out of Iraq, and they want a renegotiation of the post-invasion political order, which has seen Sunnis marginalized while Shiite clergymen and Kurdish warlords have U.S. license to run the country.

It is true that the U.S. occupation of a major Arab Muslim country has drawn a few hundred Sunni Arab volunteers to come fight against U.S. troops there, and that some of them see a propaganda value in rebranding themselves as "al-Qaida." But the technical definition of al-Qaida is operatives who have pledged fealty to bin Laden, met with him and been given a mission by him -- something the current crop of fighters would find it difficult to do. Confusing the plans and aspirations of Khalid Sheikh Mohammed, a Kuwaiti of Pakistani heritage and a planner of the Sept. 11 attacks, with those of Baath leader Izzat Ibrahim al-Duri or Iraqi Salafi Harith al-Dhari is the sort of mistake that underpinned the Bush administration's tragic invasion of Iraq in the first place. The foreign fighters would have their throats slit by local Iraqis if the civil war came to an end.

McCain appeared to have no sense of how ironic it was for him to cite Zarqawi in this connection. For several years, the Bush administration and Pentagon spokesmen trotted out Zarqawi, a Jordanian Salafi jihadist, to explain all the violence in Iraq, equating him with al-Qaida. But Zarqawi had had indifferent relations with bin Laden when he was in Afghanistan, running a rival organization called "Monotheism and Holy War." He forbade his followers to send money to bin Laden. When Zarqawi was tracked down and killed in the spring of 2006, it made no difference whatsoever to the war, which actually intensified after his death. He clearly was not behind most of the violence in the country, nor is "al-Qaida."

Because he thinks that a temporary surge of a few thousand U.S. troops into Baghdad can permanently bestow security on a huge country of 26 million, McCain has bet his presidential bid on a highly unlikely scenario. Counterinsurgency experts agree that insurgencies are best and most easily defeated early on, before they gain widespread popular support and lay down effective "rat lines" -- covert smuggling paths. Once they are ensconced, defeating them militarily becomes an extremely difficult proposition, and they are better negotiated with. Since McCain thinks he is fighting Osama bin Laden in Iraq, he cannot support the politicking with Iraq's Sunni Arabs that will be necessary to end the guerrilla war. He says he would rather lose a campaign than lose a war. Because he cannot understand what is really going on in Iraq, he will lose both.