A task force learned nearly three years ago that wounded vets were unhappy with the hospital. So why does Bush want to promote the task force co-chair? 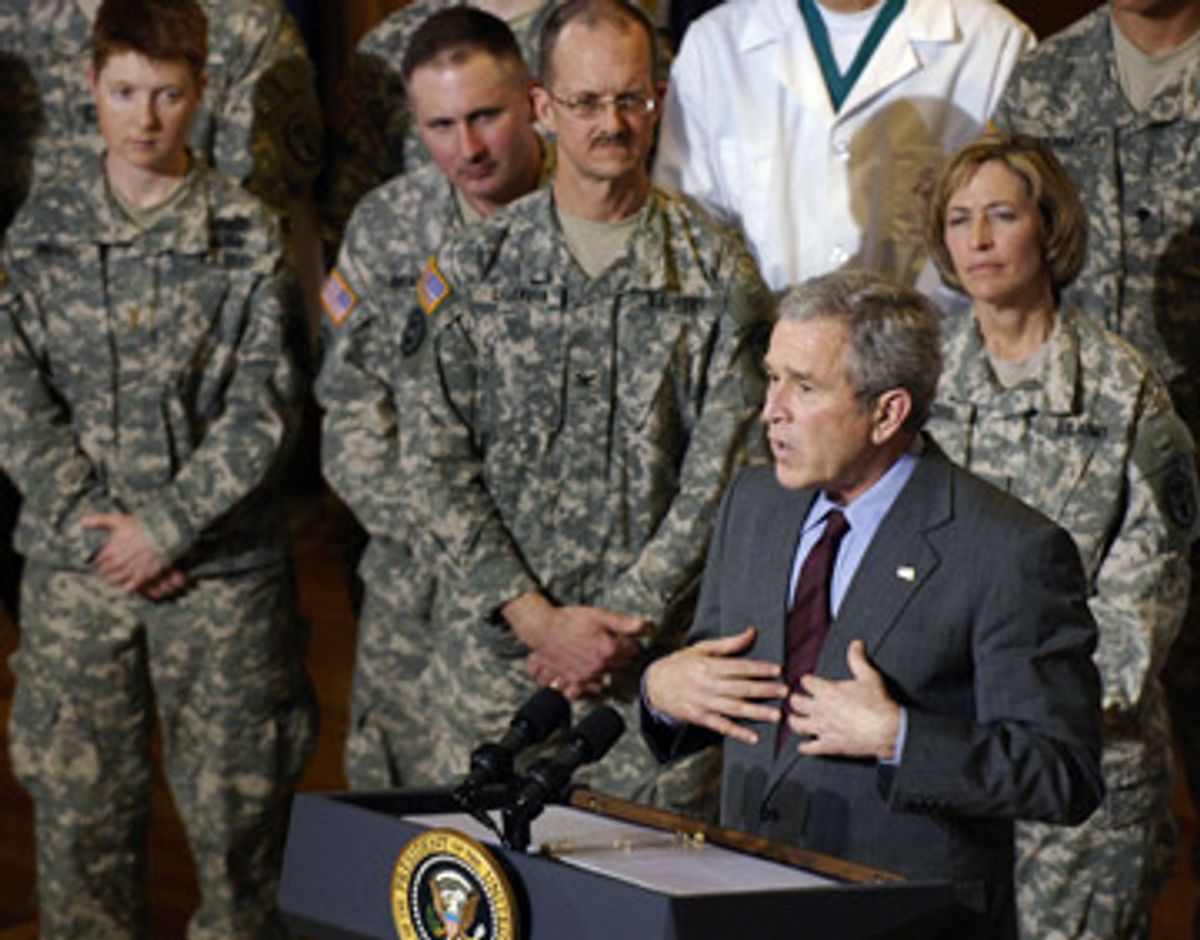 Bush administration officials have claimed that they were unaware of problems with veterans' care at Walter Reed Army Medical Center until a flurry of media reports earlier this year brought the hospital's shortcomings to their attention. But Salon has obtained written proof -- a report prepared for a Department of Veterans Affairs task force -- that officials should have been aware of the situation as long ago as August 2004. President Bush, meanwhile, having promised to improve care at the hospital, has just announced plans to nominate the co-chair of that task force to run all of the VA's health services.

In August 2004, VA researchers conducted focus group interviews with Walter Reed patients and their families. The report based on those interviews, and obtained by Salon, says that the patients -- seriously wounded veterans of Iraq and Afghanistan -- told the VA that they were "frustrated, confused, sometimes angry" about their experiences at the hospital. Documents provided to Salon show the focus group report was delivered to top VA officials in November 2004.

The report shows that top VA officials were involved in the focus group process back in 2004. Michael Kussman, then the acting deputy undersecretary for health, was co-chair of the VA's Seamless Transition Task Force, which produced the final report. The task force was supposed to make sure veterans had access to healthcare and got their benefits in a fair and timely fashion. Not only is Kussman still at the VA, but he is also in line to be promoted. On April 4, the White House announced that the president intends to nominate Kussman to be undersecretary for health at the VA.

In addition to being co-chair of the 2004 task force, Kussman was also the commander of Walter Reed in the late 1990s. Paul Sullivan, who until March 2006 was a project manager at the VA in charge of data on returning veterans, told Salon that Kussman's role troubles him. "Kussman knew in 2004 that Walter Reed was a disaster," fumed Sullivan, "and thousands and thousands of veterans have needlessly suffered long delays."

Sullivan questioned why the military and the VA apparently did not address these problems two and a half years ago. "The VA had clear and unambiguous warning that Walter Reed was a fiasco in 2004," Sullivan said. "There is no way they can say they did not know ... The question is, did they share this with the Department of Defense [which runs Walter Reed] in 2004?"

VA officials did not respond to repeated phone calls and e-mails requesting comment on the focus group report. They said they were unfamiliar with the report until Salon faxed it to them. Kussman was unavailable for an interview by deadline. His nomination as undersecretary for health must still be confirmed by the Senate.

Salon first reported on neglect for some outpatient soldiers at Walter Reed in February 2005. After a series of articles in early 2007 by the Washington Post, the Bush administration agreed to address problems with care at the facility. But the focus group report shows that the VA had heard about such problems from troops and their families in the summer of 2004, six months prior to Salon's earliest published report.

The complaints then at Walter Reed were the same ones soldiers would continue to tell reporters over the next few years. Troops who had incurred serious physical injuries depicted good experiences as inpatients at the hospital. They reserved most of their venom for the Byzantine bureaucracy that meets them when they become outpatients. It is a grueling process that requires patients to navigate mountains of paperwork while simultaneously trying to recover from war wounds.

The VA shares responsibility for treating and compensating wounded soldiers with the Department of Defense. Both the Department of Defense and the VA provide outpatient health care. Both provide long-term benefits through complex evaluation systems designed to weigh the value of service-connected health problems. The Seamless Transition Task Force was created to coordinate and streamline the two agencies' overlapping healthcare and benefits programs and help soldiers navigate the bureaucratic jungle.

Veterans returning to Walter Reed in 2004 told the VA researchers conducting the focus group interviews that the dual programs in the military and the VA together formed an impenetrable bureaucratic morass. According to the report prepared by Kussman's task force from the focus group data, as far back as 2004 there was no seamless transition. "All of [the patients'] comments reflect a lack of a clear documented process at Walter Reed for helping [veterans from Iraq and Afghanistan] transition to VA," the report says. It adds that soldiers were "confused about VA's processes and even more confused about how VA's process meshed in with Walter Reed's processes."

Injured troops, including the soldier in the wheelchair, described being given a paper checklist and set loose on the sprawling Walter Reed campus, chasing benefits from office to office. "He was assumed to be ambulatory enough to get the checklist done," the VA report explained. The process was so daunting, some expressed fear that they might get duped out of fair compensation. "I think there is a certain fear that everybody feels that they aren't going to ask the right questions," one soldier in a focus group said, according to the report. "They are going to get cheated out of something because they didn't fill in this specific form out, or that specific form."

Soldiers can get stranded at Walter Reed for months, even years, trying to get outpatient health care and battle the bureaucracy at the same time. "I am just concerned at this point that ... I am going to have to be here longer in order to try and get everything done and all the documentation required," one soldier-patient said in the report.

That report adds that those challenges were particularly daunting for soldiers at Walter Reed who did not have family support and had to fight the system alone. "I have every freaking piece of information," another soldier complained in the VA report. "I have reading material, but as far as somebody explaining it to me, that is like giving a kid a math book and saying, 'Here, you go do the math.'" The VA report described soldiers without family support as "depressed and sad and by themselves." It also noted that while both the troops and their families were frustrated and angry, they still "apologized for needing help."

Two and a half years after the task force's report, officials expressed surprise when the Washington Post reported on some of those bureaucratic failures in February. In a visit to Walter Reed March 30, President Bush blamed the problems at the hospital on "bureaucratic and administrative failures" and told patients that their transition from the embrace of one government agency to another would, at last, become seamless. "We want to make sure," Bush told patients there, "that any transfer from the Defense Department to the Veterans Affairs Department is smooth, and that there's not bureaucratic delay or obstacles in the way of making sure that we can report to our fellow citizens that people are getting the best possible health care."

"The system failed you," Bush told the patients and staff, "and it failed our troops. And we're going to fix it. We're not going to be satisfied until everybody gets the kind of care that their folks and families expect."