It's up to Congress to save the executive branch from Bush's and Rove's radical experiment to transform it forever. 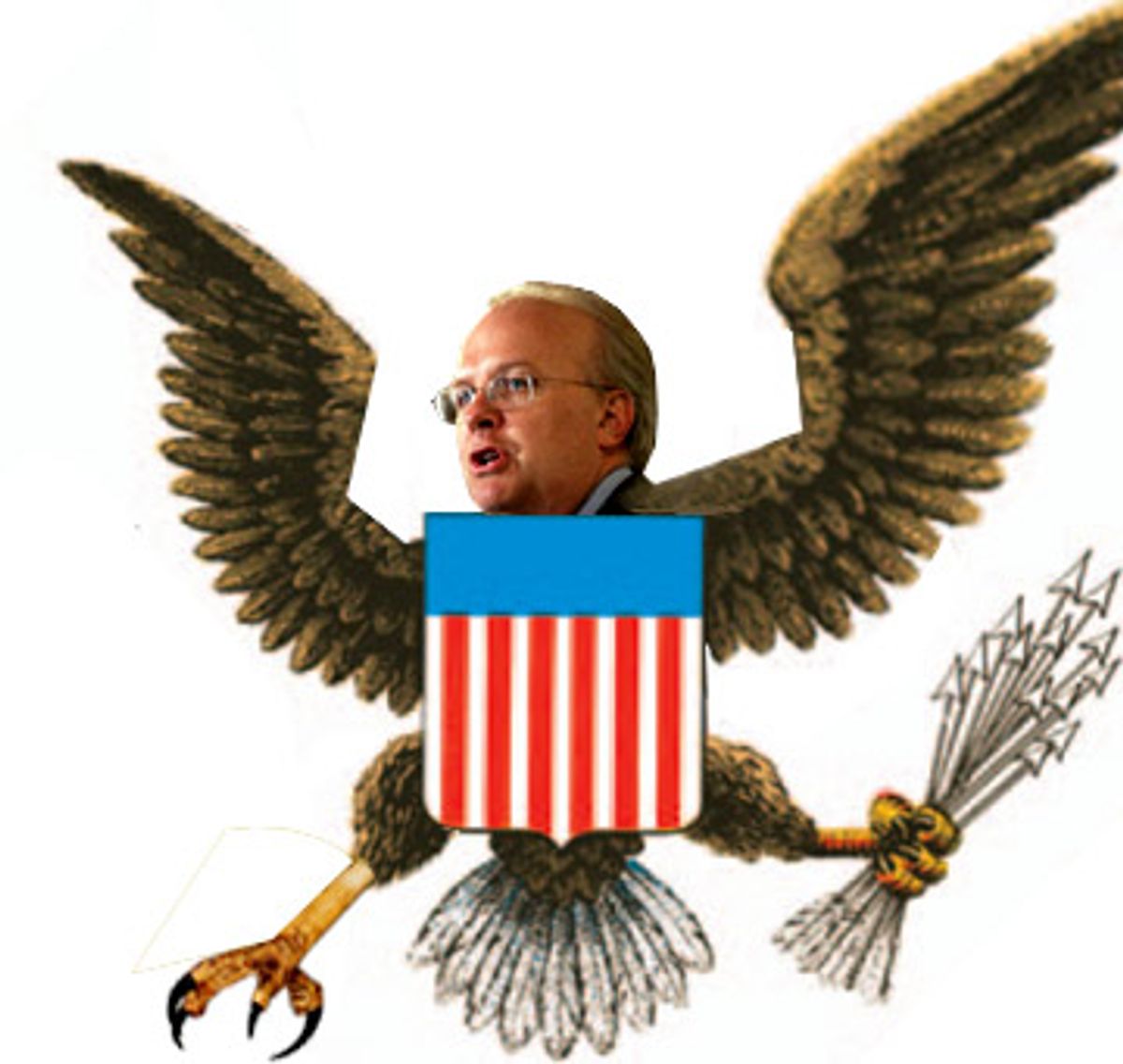 On Jan. 26, J. Scott Jennings, the White House deputy political director working for Karl Rove, delivered a PowerPoint presentation to least 40 political appointees, many participating through teleconferencing, at the General Services Administration, which oversees a $60 billion budget to manage federal properties and procure office equipment. Jennings' lecture featured maps of Republican "targets" for the House of Representatives and the Senate in the 2008 election. His talk was one of perhaps dozens given since 2001 to political appointees in departments and agencies throughout the federal government by him, Rove and Ken Mehlman, the former White House political director and Republican National Committee chairman. Rove and Co. drilled polling data into the government employees and lashed them on the necessity of using federal resources for Republican victory. "Such intense regular communication from the political office had never occurred before," Los Angeles Times reporters Tom Hamburger and Peter Wallsten wrote in their book, "One Party Country: The Republican Plan for Dominance in the 21st Century."

At the GSA presentation, the agency's chief, Lurita Alexis Doan, according to a witness, demanded of her employees, "How can we use GSA to help our candidates in the next election?" But when the House Oversight and Government Reform Committee held a hearing on March 28, Doan's short-term memory loss grew progressively worse as she spoke. "There were cookies on the table," she said. "I remember coming in late -- honestly, I don't even remember that." At a break, she ordered an assistant to remove her water glass, unaware that the microphone in front of her was still on. "I don't want them to have my fingerprints," she said. "They've got me totally paranoid!"

The Oversight Committee is investigating multiple charges against Doan -- her attempt to grant a no-bid contract to a friend; her effort to thwart contract audits and to cut funds of the GSA Office of the Inspector General, which she called "terrorists" after it began a probe into her conduct; and her potential violation of the Hatch Act, which forbids the use of government offices for partisan activity. A major Republican contributor who made a fortune as a military and homeland security contractor, Doan had held no previous government posts before being appointed last year to head the GSA. Like the fabled ("heck of a job, Brownie") Michael Brown, the former head of the Federal Emergency Management Agency, Doan is another stellar example of the culture of cronyism that has permeated the federal government under George W. Bush.

But Doan's instant incompetence and wackiness under pressure disclose more than the price of patronage. "To the victor belong the spoils" has been the rule since Andrew Jackson. And every administration has displayed cases of abuse. But the Bush administration's practices are more than the common and predictable problems with patronage. Bush has not simply filled jobs with favorites, oblivious to their underhanded dealings, as though he were a blithering latter-day version of Warren Harding. Bush has been determined to turn the entire federal government, every department and agency, into an instrument of a one-party state. From the GSA scandal to the purging of U.S. attorneys, Bush has engaged in a conscious, planned and systematic assault on the professional standards of career staff, either subordinating them or replacing them with ideologues.

Doan and Brown are on a continuum of officialdom that runs to Monica Goodling -- until recently the No. 3 official in the Department of Justice, an evangelical graduate of Messiah College and Pat Robertson's Regent Law School, and a true believer in Bush as political messiah. Doan and Brown are cronies, but Goodling is a cadre. Within the Bush administration, there are hundreds of Monica Goodlings, and she was their ideal. A zealot for the cause, she apparently divides the world into good and evil, sacred and profane. She interprets criticism and debate as a mortal threat to all that is good and holy. She sees any institution of American life that is not devoted to the flag and cross to which she pledges and worships as twisted, biased and infernal. (To Goodling, CNN is "a force of the left.") She cannot distinguish between her absolute beliefs and their political instrumentality. She considers objective and professional analysis a ruse, an ideology in itself, a false faith. She sees those who adhere to standards of professionalism as agents of deception, hiding their real agendas. She was enthusiastic in weeding out Justice Department employees and replacing them with true believers like herself. Goodling's refusal to testify before the Senate investigation into the firing of U.S. attorneys and her assertion of the Fifth Amendment because the Senate operates in "bad faith" casts her as martyr and saint, warrior and crusader.

While Vice President Dick Cheney and former Secretary of Defense Donald Rumsfeld installed neoconservative ideologues throughout the national security apparatus, sidelining the senior military, diplomatic corps and intelligence community, and creating parallel operations to avoid assessment by professionals, Rove was handed the rest of the executive branch to arrogate for political purposes.

Consider the reports surfacing only within the past month: that scientists at the Fish and Wildlife Agency and the National Oceanic and Atmospheric Agency have again been forbidden to discuss climate change; that nine newly appointed U.S. attorneys are political cadres; that the new U.S. attorney for Minnesota, Rachel Paulose, cites Bible verses in the office, harshly orders underlings around and, according to one of four assistant U.S. attorneys in her office who voluntarily demoted themselves, treats disagreement as "disloyalty"; that the Election Assistance Commission last year, giving credence to Republican talking points of widespread voter fraud, ignored experts' testimony to the contrary; that between 2001 and 2006, the Civil Rights Division of the Justice Department has purged 60 percent of its professional staff and not filed a single voting discrimination case on behalf of African-American or Native American voters; and that after the state Republican Party complained to Rove that the U.S. attorney in Wisconsin, Steven Biskupic, was not attacking voter fraud, Biskupic kept his job by filing corruption charges against an aide to the incumbent Democratic governor on the eve of the 2006 elections. (The 7th Circuit Court of Appeals recently ruled the aide was "wrongly convicted" on evidence that was "beyond thin.")

On the one hand, Rove has sought to forge a permanent Republican majority. On the other hand, that project might not be completed in just two Bush terms. In either case, Rove's strategy has depended on subjecting the federal government to political objectives. He is not trying to achieve any abstract goal, such as reaching the conservative nirvana of limited government. The endless scandals revealed are not a random compendium of corruption and incompetence, though they are that, too. They are evidence of Rove's -- and Bush's -- larger strategy of hollowing out the federal government in the interest of building a political state.

In 2002, a University of Pennsylvania professor and earnest conservative named John DiIulio, who had been appointed a White House domestic policy advisor to Bush's faith-based initiative, the essence of his claim to being a "compassionate conservative," resigned, becoming the first person to quit the administration in disgust. As DiIulio told reporter Ron Suskind, writing in Esquire magazine, the tone was set from the top. He overheard Rove shouting about some poor object of his anger, "We will fuck him. Do you hear me? We will fuck him. We will ruin him. Like no one has ever fucked him." DiIulio was shocked to discover not only that Rove was placed in charge of domestic policy but also that Bush had no interest in it except as a political tool. "On social policy and related issues, the lack of even basic policy knowledge, and the only casual interest in knowing more, was somewhat breathtaking," DiIulio said.

Possessed with a sense of history, the disillusioned professor's remarks of five years ago have proved prophetic: "There is no precedent in any modern White House for what is going on in this one: a complete lack of a policy apparatus. What you've got is everything -- and I mean everything -- being run by the political arm. It's the reign of the Mayberry Machiavellis."

In all his machinations Rove did not calculate that he would ever create an opposing force that might stop him. The Republican Congress had long shielded the administration from oversight and investigation, protecting Rove's handiwork. Now the Democratic Congress has begun to uncover seemingly endless series of abuses. In this respect, the clash of the legislative and executive branches is not over a difference in policy, as in the conflict over the Iraq war. Rather, Congress' effort is even more fundamental: to salvage the executive branch -- its capability of functioning in the public interest in the future -- from Rove's radical experiment to transform it forever.