Fans of the culty animated TV show that inspired this movie may giggle and guffaw -- but will anyone else? 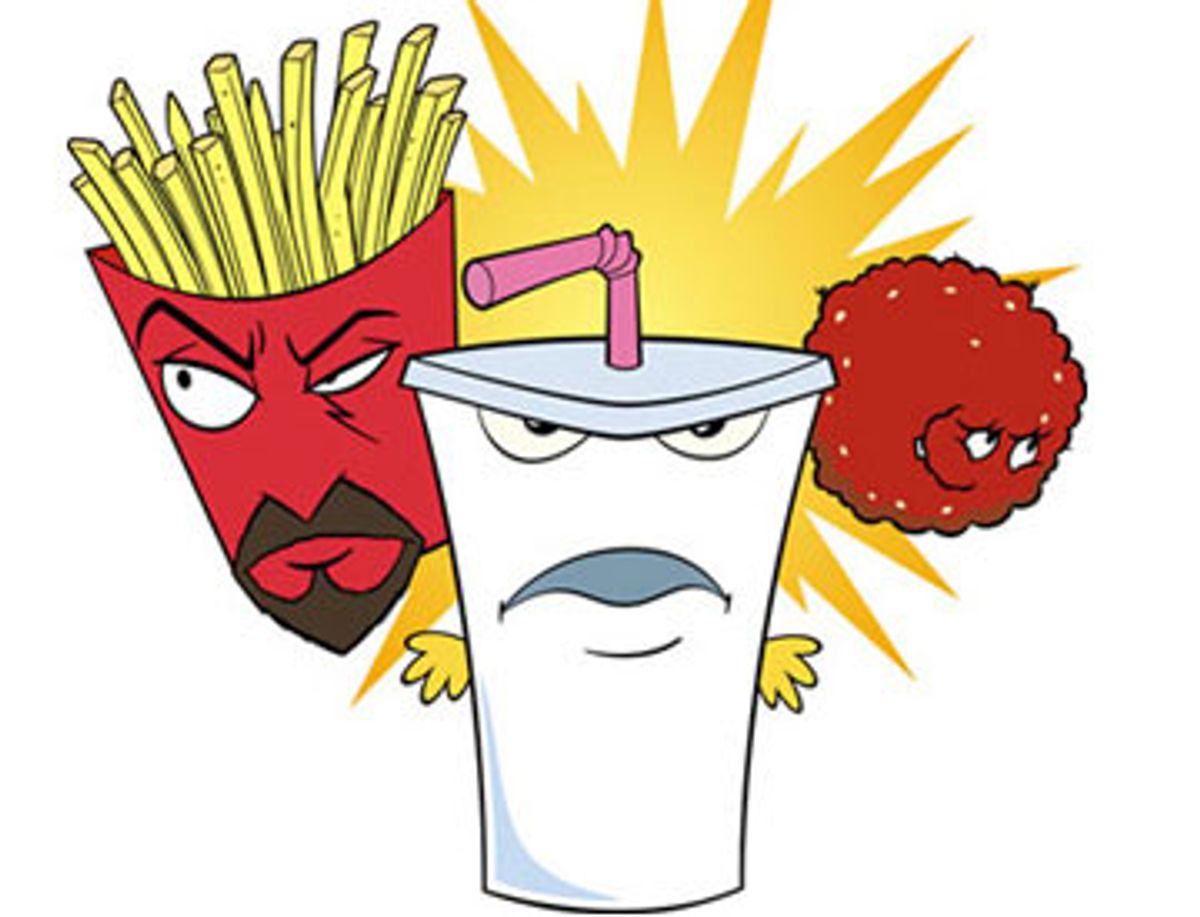 There's a long, proud tradition of non sequitur humor -- Firesign Theatre, Peter Cook and Dudley Moore, S.J. Perelman -- in which seemingly disconnected lines or gags jostle against one another in a way that makes sense, at least according to some form of furry dream logic. "Aqua Teen Hunger Force Colon Movie Film for Theaters," a movie-length version of the culty TV show that's part of the Cartoon Network's "Adult Swim" late-night programming block, is all about the non sequitur: The picture hurtles bunches of them at us -- Hey, it's Abe Lincoln, with a time machine! Don't look now, but here comes an exercise machine that could destroy the planet! Hey, one of those characters just mentioned (recently deceased) filmmaker Bob Clark, director of pictures like "Porky's" and "A Christmas Story"! Cray-zee! -- then waits a beat (or two, or three), as if listening for our laughter.

Humor is, of course, subjective, and "Aqua Teen Hunger Force" is clearly designed to appeal to fans of the show. For the rest of us, its appeal may be something of a stretch, starting with the movie's full title, which might have been funnier if the "Borat" subtitle, "Cultural Learnings of America for Make Benefit Glorious Nation of Kazakhstan" hadn't gotten to us first. The picture, written and directed by Matt Maiellaro and Dave Willis, originators of the TV show, feels deeply calculated rather than genuinely crazy. And some of the funnier gags are things we've seen before, like the subtitle that sets the scene for the movie's opening, beginning with the lines "Egypt. Millions of Years Ago," followed by "3 p.m.," and then "1492." The first two acts of the joke come straight from Carl Gottlieb's loonily brilliant 1981 "Caveman," which isn't necessarily a problem (humor is often about borrowing). It's just that a version of the same gag is repeated two or three times during the course of the movie, and once would have been plenty.

"Aqua Teen Hunger Force" tells the back story, the front story, and the everything-in-between story of its three fast-food-product heroes: Master Shake (a milkshake with stubby hands and sad-sack eyes), Frylock (a packet of fries with the goatee of a bad-ass Blaxploitation villain), and Meatwad (a superstupid but allegedly beloved meat patty). (Their voices are supplied by Dana Snyder, Carey Means and Dave Willis, respectively.) These three, who live in a run-down house somewhere in New Jersey, tangle with assorted villains and boneheads, like Dr. Weird (C. Martin Croker), in his nipple-exposing unitard, and Carl (Dave Willis), the hairy slob next door.

The jokes -- which involve fleeting references to Elvis and Chow Yun Fat, assorted horndog comments from one character or another, and a Space Ghost cameo -- feel like forced lunacy, a contest to see how many wacky thingamabobs can be packed into one stream of dialogue. That said, the aggressively primitive-looking animation is occasionally brilliant, particularly when it comes to the character design of some of the supporting players. My favorites were Ignignokt and Err, a duo of squared-off, two-dimensional creatures: With their herky-jerky movements and stilted speech patterns, they're like refugees from an old Atari video game. These two ill-tempered pixelheads descend to earth via "tractor beam" -- ve-e-e-ery slo-o-o-wly -- to rob a luxe loft apartment. They abscond, again very slowly, first with an ashtray and then a coffee table. Now that, unlike talking milk shakes and futuristic-retro Abe Lincolns, makes sense.