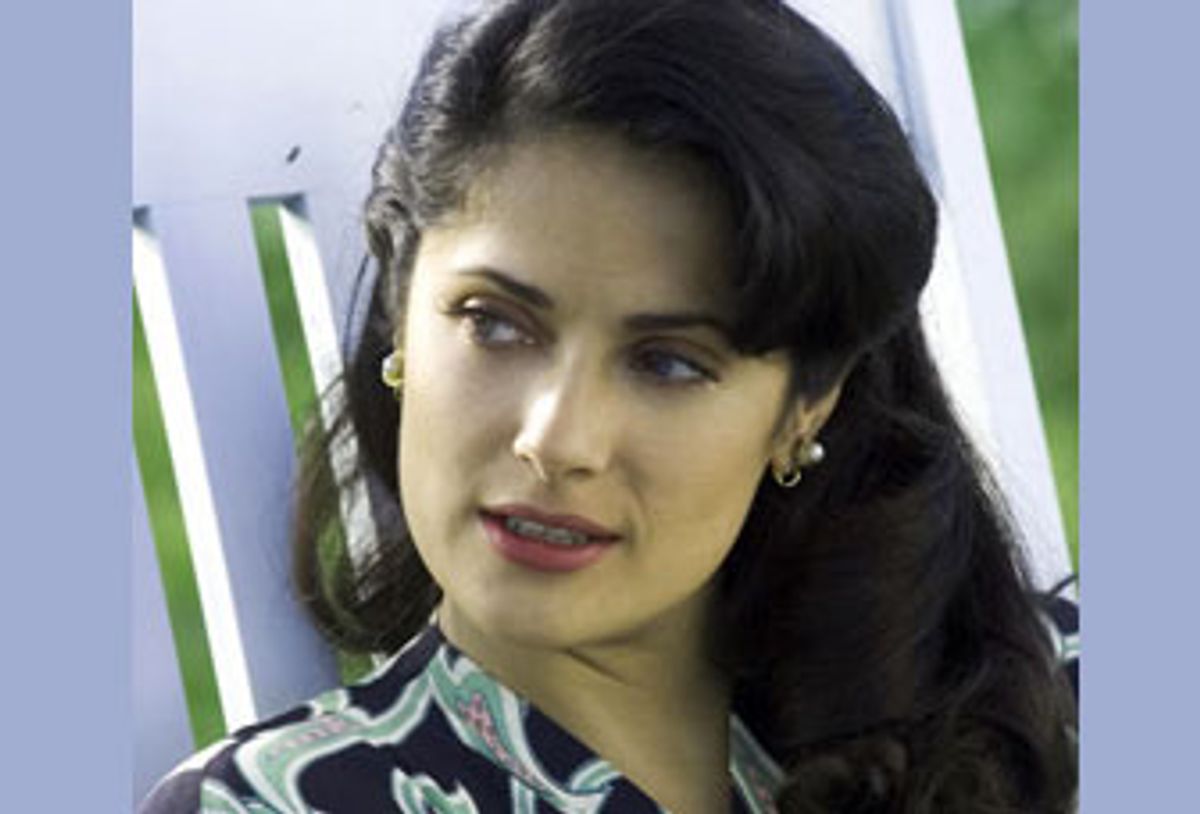 Todd Robinson's "Lonely Hearts," based on the true story of serial killers Martha Beck and Raymond Fernandez, is a grisly little number, a Weegee-hued world of pale, naked corpses reclining in bloody-pink bathwater, of blood seeping through plank floors and splattering on walls. In the late 1940s Beck and Fernandez made a living, of sorts, preying on lonely women: First they'd bilk them, then they'd kill them. Ray would play the suave, gentlemanly, irresistible fiancé; Martha, a nurse, posed as his sister. The two were caught in 1949 and executed at Sing Sing in 1951, a fitting end for a humdinger of a pair. "Lonely Hearts" focuses not just on the crimes of the couple -- they're played here by Jared Leto and Salma Hayek -- but on the obsessive efforts of one Nassau County detective, Elmer C. Robinson (played by John Travolta), to capture them. The clincher is that Elmer Robinson was the director's grandfather.

Given Todd Robinson's personal connection to the story, there's clearly a lot at stake for him here. And maybe that's the problem: "Lonely Hearts" is a grim little exercise, all right. (The story of Fernandez and Beck has been told on film twice before, in Leonard Kastle's 1970 "The Honyemoon Killers" and in Arturo Ripstein's 1996 "Deep Crimson.") Robinson clearly doesn't intend to shy away from the horror of the story, and he's eager to explore the psychological suffering that drove his grandfather to solve the crime. (Elmer Robinson's own wife committed suicide by putting a gun to her head, which must have brought on the kind of pain not even an old-school tough guy is equipped to deal with.) Yet "Lonely Hearts" feels stiff and costumey rather than dark and tough. Cinematographer Peter Levy uses a somber palette to give the picture a faux-noirish feel, which is effective enough. But the movie is book-ended (and interspersed) with cardboard voiceovers by James Gandolfini, who plays Elmer's partner, Charles Hildebrandt.

Robinson strives for authenticity in everything from the costumes to the interiors, but he's less successful at guiding his actors. Are they pure period or pure caricature? With their clipped, man-of-few-words dialogue, it's hard to tell, but Travolta, especially, flounders: He tries for subtlety, expressing horror or frustration simply by tightening his jaw muscles, but there isn't a whole lot going on in his eyes.

It doesn't help that much of the filmmaking is lumbering and obvious. In an early scene, we see Ray Fernandez sitting in a rented room, planning his next scheme. His hair is thinning, and there's a toupee resting on a wooden head nearby. It's not enough just to include the toupee'd head in the shot; the camera has to move in and scan it, just in case we missed it. Robinson is fairly discreet about the murders themselves; he doesn't try to soften their horror, but he doesn't fetishize them, either. And he knows what not to show: Fernandez and Beck murdered a 40-ish woman and her young child, and in conveying what happened, Robinson -- aside from, perhaps, one excessively lingering shot of a riderless tricycle parked in a backyard -- takes great care not to milk us unduly.

Leto, bug-eyed and twitchy, makes a disappointingly uncharismatic killer, which is maybe part of the point: The women he and Beck conned were desperate. Still, you wish he had a few more angles, a little more dimension. Laura Dern has a small role, as Elmer Robinson's frustrated girlfriend -- he won't publicly acknowledge the couple's relationship because he wrongly believes his teenage son, played by Dan Byrd, won't accept it. Dern has always been a striking and intelligent actress, and in recent years, she only seems to be getting better and better. She was marvelous in David Lynch's feverishly stunning "Inland Empire," and here, she strikes just the right balance between being soft-hearted and tough-minded. The role is small, but the performance is potent.

But the picture belongs to Salma Hayek. The real-life Martha Beck was, in addition to being a plain old sociopath, unhappy, insecure and grossly overweight. Robinson (who also wrote the movie's script) has rewritten Martha as a bombshell, a bit of revisionism that works. Ray meets Martha the same way he meets all his other marks: Through lonely hearts' advertisements. She knows immediately what his game is, and joins in, uninvited: The day after they meet (and immediately fall into bed), Ray trots off to the funeral of a business big shot, hoping to ingratiate himself with the guy's rich widow. Just as his scheme is about to go south -- he's been knocked to the ground by a funeral attendee who smells a rat -- Hayek's Martha shows up and squats down protectively to soothe him, giving us a glimpse of stocking held up by one deeply erotic garter.

Hayek is dishy and extreme. Sometimes she goes right over the edge, and the movie doesn't have the smarts to follow her: In one scene, she flies into a jealous rage as Ray is bedding one of their unsuspecting targets (played, very sympathetically, by Alice Krige). Shortly thereafter, she mounts Ray herself, removes his toupee, and, in her anger, starts slapping his shiny pate with it. The moment is darkly, sickly hilarious, and Hayek seems to know it. But Robinson gives it to us straight: I laughed, but I wasn't sure I was supposed to. Hayek, with that old-time movie-star pout, those dark, reflective eyes (they could be Satan's twin swimming pools), is the shivery, chilling backbone of "Lonely Hearts." Martha Beck couldn't get away with murder. But Salma Hayek can.