Halle Berry seduces Bruce Willis -- but alas, not us -- in this twisty-turny thriller. 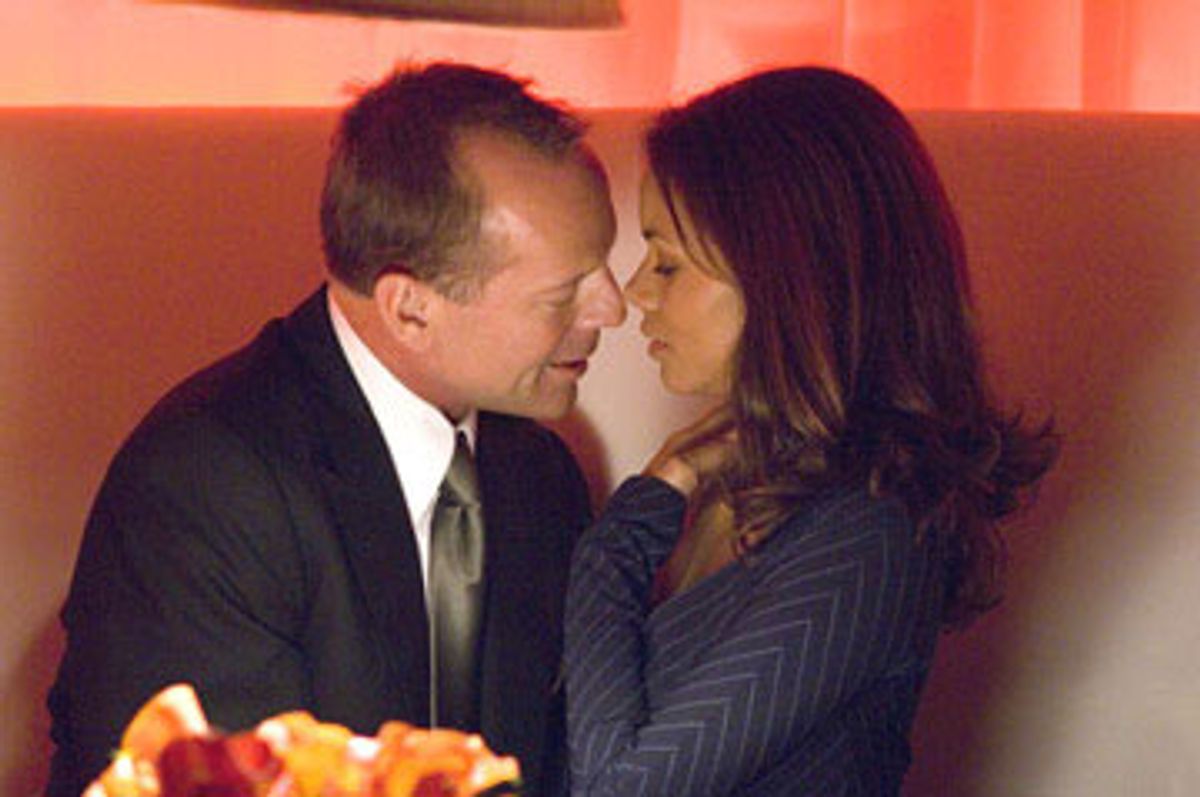 Theoretically, there should be no such thing as a mediocre thriller: Either it thrills or it doesn't. Yet there's a vast, possibly bottomless pit reserved for thrillers that are neither good nor bad enough to be truly entertaining, and James Foley's "Perfect Stranger" tumbles right into it. Halle Berry plays Rowena, an inquisitive reporter for a New York tabloid who, in print, goes by the name David Shane so no one will know she's a woman. In the movie's first scene, she ambushes a conservative anti-gay rights legislation senator, confronting him with pictures that show him cavorting with one of his young male interns. "I work for David Shane at the New York Courier!" she announces, dropping the bomb. "Jesus Christ!" the miscreant exclaims, like a villain in a "Superman" comic, his balls having been suitably and duly busted.

But Rowena's paper, unwilling to turn tail on a politician it had previously endorsed, kills the story. Understandably disillusioned and embittered, Rowena quits her job in a clatter of spike heels, only to stumble onto a case bigger than anything she has ever encountered: When the body of an old friend shows up in a Gotham morgue, she has reason to believe that a rakish Manhattan advertising magnate named Harrison Hill (Bruce Willis) is the killer. With the help of one of her former co-workers, tech whiz Miles (Giovanni Ribisi), she sets out to trap Hill: By day, she works, undercover, as a temp at his agency -- a kind of Mata Hari of Madison Avenue -- harvesting gossip from her chatty co-workers and monitoring the boss's careless flirtations, which he strives to keep secret from his ultrajealous wife. By night she titillates him via sexy, anonymous online chats, fielding questions along the lines of that whiskery chestnut, "What are you wearing?"

Of course, as in most mediocre thrillers -- and in many good ones -- people are not everything they appear to be. Everyone here has a secret, and some of those secrets are bigger than others. But by the time those secrets are revealed -- most of them in a rushed wrap-up at the very end of the picture -- we've been through so many tortured, screenwriters-workshop-style plot twists that we've almost forgotten how we felt about any of those characters in the first place.

"Perfect Stranger" was directed by James Foley (whose credits include "Glengarry Glen Ross" and "Who's That Girl?"); the writers are Todd Komarnicki and Jon Bokencamp. And it's hardly a complete disaster. For one thing, it doesn't make the mistake of taking itself too seriously. Willis' presence alone leavens the picture: He makes a seductive, witty villain, a guy whose charisma, and not his libido, is his own worst enemy. He's so charming he almost can't stand himself -- the flirty gleam in his eye says, "Stop me, before I seduce again!" He has even hired a hot lesbian secretary (va-va-voom brunette Daniella van Graas) to keep his extramarital love life organized; she struts through the agency's offices on legs as long as circus stilts, taking notes and putting out fires (although she probably doesn't put out nearly as many as she starts).

Ribisi, playing the kind of guy who wears the thing he can most conveniently pick up off floor when he gets up in the morning, helps keep the movie rolling, too. The semi-nerdy Miles has an obvious crush on Rowena, and one evening, hanging out at her apartment as the two are finishing up some work, she emerges from her bedroom in a dress that slithers along her curves like liquid. When she plunks down next to him on the couch, so he can show her some razzmatazz on the laptop, he can't help stealing semi-surreptitious glances down her cleavage. This is obviously the highlight of his day, and his valiant effort to be discreet and gentlemanly is the funniest thing in the movie.

But the movie doesn't know if it wants Miles to be a charmer or a sleazebag, and that shaky uncertainty applies to other characters, too. In the movie's universe, this constitutes "complexity" -- it doesn't matter that the characters' shifting behaviors don't make much sense. Remember (as if you could ever forget): People are not always as they seem! Meanwhile, characters walk around intoning lines like "Actions have consequences" and "All it takes to commit a murder are the right ingredients at the right time." You see a theme coming straight at you here, and it looks like the Stay Puft Marshmallow Man.

Although Berry can be charming -- and there's no doubt she's lovely to look at -- she can't anchor this picture. Berry has given a few very good performances, most notably in the 1999 TV movie "Introducing Dorothy Dandridge." But here, she's only perfunctory: The movie asks little of her, and she gives little back. We get many, many shots of her wearing a cute little newsboy hat, tilted dashingly over one eye. She and the hat are both adorable, but a little of that goes a long way. "Perfect Stranger" is one of those movies that two years, or two months, from now, you won't recall having seen. Ostensibly a movie about big secrets, it comes up with few that are worth keeping, or telling.