(1) According to this latest New York Times report -- primarily focused on a mostly empty Iraqi parliament session at which the victims of Thursday's successful attack on the Iraqi parliament were mourned -- someone forgot to tell Shiites in Southern Iraq how Great the Glorious Surge is working:


In Diwaniya, in the south, where American and Iraqi forces have been clashing for more than a week with militiamen loyal to the radical Shiite cleric Moktada al-Sadr, American soldiers prevented Mr. Sadrb

The militiamen then went to pray at the Sadr group's office, where Americans arrested three men, including the main spokesman. Mr. Sadr's supporters blocked the American vehicles from leaving, and the Americans released the three men, witnesses said.

And: "A car bomb blasted through a busy bus station near one of Iraq's holiest shrines Saturday and killed at least 56 people" and "Rioters surrounded the Karbala governor's office and demanded his and provincial council members' resignations -- blaming them for lax security. Mobs threw stones at the governor's office and set fire to the building" and on and on and on, in that single article alone.

The warriors who immediately seized on a statistically meaningless lull in violence that lasted all of 11 hours or so in order to run around screaming that the "Surge is Working!" are so far beyond being discredited that a new term ought to be invented to describe it.

(2) In light of recent revelations concerning the Bush administration, it is worthwhile to watch Norah O'Donnell's angry interview of Pat Leahy from the end of March, in which O'Donnell expresses a mix of anger and incredulity over the fact that Senate Democrats want to question Karl Rove under oath and in an open session with a transcript, rather than in a private "interview" with no oath.

Norah O'Donnell does not understand why anyone would think that there is reason to believe that the White House and Rove may not be entirely forthcoming when answering the Senators' questions. She literally does not comprehend the general concept of oversight and specifically the rationale as to why someone would be reluctant to place blind trust in the Bush administration's assertions.

And that belief in the core goodness and trustworthiness of Bush officials is what animates many of her colleagues. What could possibly be worse for a country than to have its top journalists operate on the premise that blind trust should be placed in the Leaders? "You guys are going to get the truth from Karl Rove. What's wrong with that?"

(3) In all the time I've been blogging, I am almost certain that this comment -- from Thomas, some sort of official at Red State -- is my favorite ever (h/t Tsulagi): 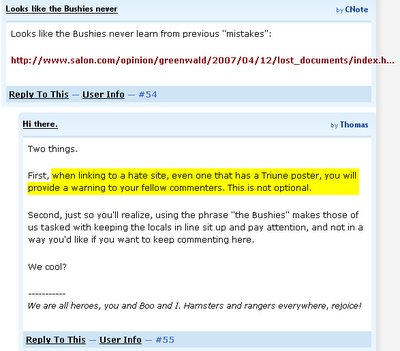 The imperious tone. The promulgation of a formal rule. The proclamation that this blog is officially decreed to be "hate site." As always, those with the hardest job in America are those who seek to satirize Bush followers. No matter how far one takes the satire, they always exceed it.

(4) NewsBusters reports on Jack Cafferty's CNN segment -- in which Cafferty noted the multiple instances over several years in which vital evidence in the possession of the Bush administration has mysteriously disappeared -- and includes this notation:


On Friday's "The Cafferty File," which is part of CNN's "The Situation Room with Wolf Blitzer," Cafferty cited some of the many quotes blogger Glenn Greenwald collected from a variety of liberal mainstream media sources, such as the New York Times, Newsweek, NPR, and the Associated Press.

One can disregard the fact that crucial emails and other evidence centrally relevant to various scandals and investigations continuously disappears, because it is "liberal mainstream media sources" reporting it -- including Far Left outfits such as Newsweek and The Associated Press.

(5) Although it is a heated competition, I think the single dumbest and most intellectually dishonest rhetorical tactic -- wielded most prominently by Drudge but with plenty of followers doing the same -- is from those who cite cold weather conditions on a given day in order to impliedly discredit the worldwide consensus of climatologists and other scientists on global warming. It would be as if someone constantly linked to individual obituaries as proof that world population is not really growing. It is that dumb and dishonest.

(6) Dover Bitch analyzes a report from The Guardian that the Bush administration offered to commence military action against Iran during the time Iran was holding the British sailors. Jim Webb had repeatedly asked Condoleezza Rice whether the administration believes it has the authority to attack Iran militarily without Congressional authorization. Has the administration ever responded to that inquiry?

(7) The always excellent Chris Floyd examines the largely ignored actions of the Bush administration and its closest allies in Somalia. Freedom is on the march.