Is Rush Limbaugh next?

Conservatives fear that Don Imus is the first casualty in a liberal-led media purge to force right-wing talkers off the air. 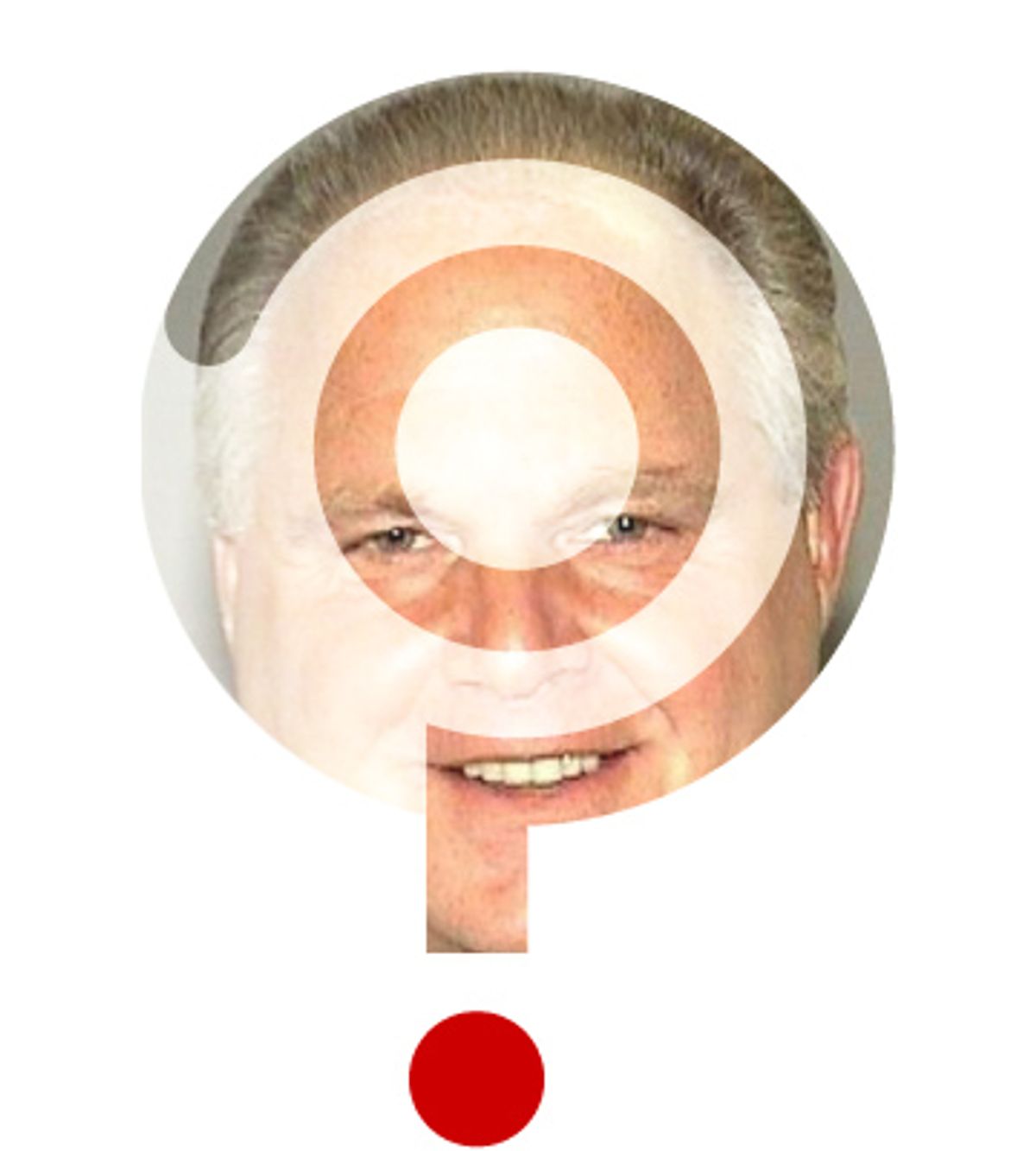 First they came for Don Imus. And now they'll come for Rush.

At least, that was the fear at the Free Congress Foundation on April 13, where a panel discussion of an ancient broadcasting regulation quickly turned into a discussion of Don Imus and how his firing might portend a similar fate for some of the right's best-known media personalities. In the absence of any compelling evidence, participants in the latest of the conservative think tank's occasional Next Conservatism Forum series managed to convince themselves that the Fairness Doctrine, a rule that was scrapped by the Federal Communications Commission 20 years ago, was poised for a comeback, and was about to become a weapon in a liberal jihad against the right wing's freedom of speech.

In fact, the prominent conservatives, addressing a crowd of 30 on the ground floor of a Washington row house, described what sounded like a conspiracy. Panelist Ken Blackwell, formerly Ohio's secretary of state and the Republican candidate for governor last fall, said Imus was "not a conservative" and that "the left has sacrificed one of their own to give them a platform to go after true conservative talk show hosts." Cliff Kincaid, of the conservative media watchdog Accuracy in Media, said the Imus firing had been a revelation. "It wasn't exactly clear to me how [liberals] intended to bring back the Fairness Doctrine, but I think now with the Imus affair, we know ... [And it's a] short leap from firing Imus to going after Rush Limbaugh."

Established in 1949, the Fairness Doctrine was an FCC regulation that required broadcasters to give balance to opposing viewpoints in any opinion programming. Its abolition by the FCC during the Reagan administration is widely credited with making the explosion of conservative talk radio possible.

With the return of the Democrats to power in Congress, conservatives have become concerned that the Fairness Doctrine might be on its way back. William S. Lind, director of the Free Congress Foundation's Center for Cultural Conservatism and moderator of the April 13 panel discussion, said the choice of topics had been occasioned by an "emergency" -- the Fairness Doctrine's seemingly imminent return.

But fear of its return isn't restricted to the Free Congress Foundation. Since Imus' firing, conservative pundits have been painting a picture of an entire ideological community under siege.

In an article April 13, Byron York, White House correspondent for the conservative National Review, asked the question, "What's next for the activists who called for Don Imus' head," then answered himself, "Two words: Fairness Doctrine." York's colleague at the National Review, radio host Mark Levin, wrote a post in which he said that "there is now a campaign underway ... to force conservative talk show hosts from radio ... It appears we have a rather sleazy effort afoot to silence the one broadcast venue the Left can't control." Attributing this effort to liberal media watchdog Media Matters, Levin linked to conservative blog Sweetness & Light -- Sweetness & Light, which wrote that Media Matters president and CEO David Brock "jumps on any chance to try to control free speech in this country." It added that "if Media Matters has its way the only people who will be allowed to use the public airwaves will be Messrs. Brock, [George] Soros, [Noam] Chomsky, Ms. Hillary Clinton and other officially approved Democrats." On NewsBusters, the blog of conservative media watchdog Media Research Center, Dan Riehl wondered, "Does Get-Imus movement foretell Fairness Doctrine reinstatement?"

But at the forum, conservatives were already thinking of ways to fight back. From the audience, Wes Vernon, a former broadcast journalist and now a conservative commentator, said he believes "the best way to combat this is public outrage. Al Sharpton knows how to stir it up, Jesse Jackson knows how to stir it up ... There ought to be some kind of effort to raise money to put ads on the air and in the newspapers alerting people about this."

Dick Morris, the political consultant and pundit who managed Bill Clinton's 1996 reelection campaign, said it came down to language.

"Let's try to replace the word 'Fairness Doctrine,'" he told the audience. "Vocabulary is so important in politics." Morris gave as examples the phrases "right to work" and "prevailing wage," and jokingly offered a free trip to Hoboken, N.J. for the person who could come up with a new formulation for the debate. Morris himself seconded Lind's suggestion that the Fairness Doctrine be rebranded the "Unfairness Doctrine," and added that the current absence of any regulation ought to be called the "Freedom Doctrine." In an interview with Salon after the discussion, Morris explained that when searching for language like this, he's looking for a "positive message" to deliver to voters, and that he rejected an audience member's suggestion of the "Hypocrisy Doctrine" because "the concept of hypocrisy is, 'I'm admitting that I'm bad, but you're bad too.'"

At the forum, Morris actively cheered the firing of Imus. "'Thank God' is my reaction," he said. He accused the radio host of making "bigotry and ethnic hatred entertaining and fun" and cited several examples of previous racially charged statements Imus had made. Morris added that he hoped the incident would be "part of a revolution in manners ... [that] signals the death knell for ethnic jokes in public."

Talking to Salon afterward, however, Morris drew a distinction between Imus and people like Limbaugh. "I think there's a vast difference between humor that seeks to demean, or rhetoric that seeks to demean," Morris said, "and issue positions that happen to be against the views of a certain community."

Kincaid drew a similar distinction in an interview with Salon, saying he favored the FCC's monitoring of broadcasts for sexual indecency, but that he would not support similar measures against racist speech.

"Then you're getting into political speech," Kincaid said, "and what one defines as, quote, 'racism.' How do you define the term? I don't want the FCC to define that."

Indeed, much of the panel seemed of two minds -- on the one hand happy that an "indecent" voice was gone from the airwaves, and on the other worried about what Imus' firing portends for conservative free speech and concerned that liberals are trying to use the power of the state to silence them.

"This is very much an issue of censorship, and it's interesting, isn't it, that hate speech is only hate speech when it's directed against the carefully designated victims' groups of cultural Marxism," Lind said. " You can say all the hate speech you want on radio or television directed at Germans or Swedes ... This is our old opponent, cultural Marxism, doing what Marxists do -- trying to use the power of the state to make it illegal to disagree with their ideology."

Blackwell, for his part, said liberals are trying to use the Fairness Doctrine to accomplish what they could not in a free market, and asserted that liberals are "terrible" at making talk radio. "If liberals think it is just too hard to compete with the Sean Hannitys of the world," Blackwell said, "then they should focus on what they do best -- make ice cream."

The panelists tried to assemble proof to support their Fairness Doctrine fears. They mentioned Sharpton's call for the FCC to step in and his vow that this was only the beginning of the fight; they pointed to the Huffington Post's listing old examples of controversial statements by Limbaugh and Fox News host Bill O'Reilly. There were also the ritual invocations of favorite boogeyman George Soros. Kincaid repeatedly referred to Media Matters as Soros funded, and a pamphlet and fundraising appeal that Accuracy in Media distributed at the forum talks about a dark "conspiracy" that puts "in jeopardy ... all of the progress that conservatives have made in the media over the last several decades."

But perhaps conservatives are projecting a little bit. Though there are media organizations on the left -- some funded by Soros -- that have called for its return, the evidence for the Fairness Doctrine's imminent reappearance is not overwhelming. Free Congress Foundation panelists warned that a Democratic president would be able to appoint FCC commissioners who could unilaterally reinstate the rule. They didn't mention, however, that it hadn't happened in the eight years of the Clinton presidency.

Return of the Fairness Doctrine via an act of Congress isn't exactly looming either. An effort to bring it back died in the House in 1993, when Democrats controlled both chambers and the presidency. Fourteen years later, the law has its proponents in both chambers, but they're not the sort of legislators who are known for corralling veto-proof majorities -- Rep. Alcee Hastings, D-Fla., Rep. Dennis Kucinich, D-Ohio, Rep. Barbara Lee, D-Calif., Rep. Maxine Waters, D-Calif., and Sen. Bernie Sanders, I-Vt., among others.

Meanwhile, those who could realistically be the catalysts for such legislation don't seem to have much interest. Reached April 13, a spokesman for Rep. Ed Markey, D-Mass., who chairs one of the relevant House subcommittees, didn't know what the Fairness Doctrine was. In the Clinton era, by contrast, Markey had been a key proponent of the doctrine's return.

"I'm not aware that there's any kind of debate about the Fairness Doctrine," Manley told Salon. "To be honest, I barely even know what it is ... [Sen. Reid] is not contemplating anything like that. It truly is not on his radar screen."