The best way to reduce the odds of another blood bath like the one at Virginia Tech is to amend the Constitution and abolish the right to bear arms. 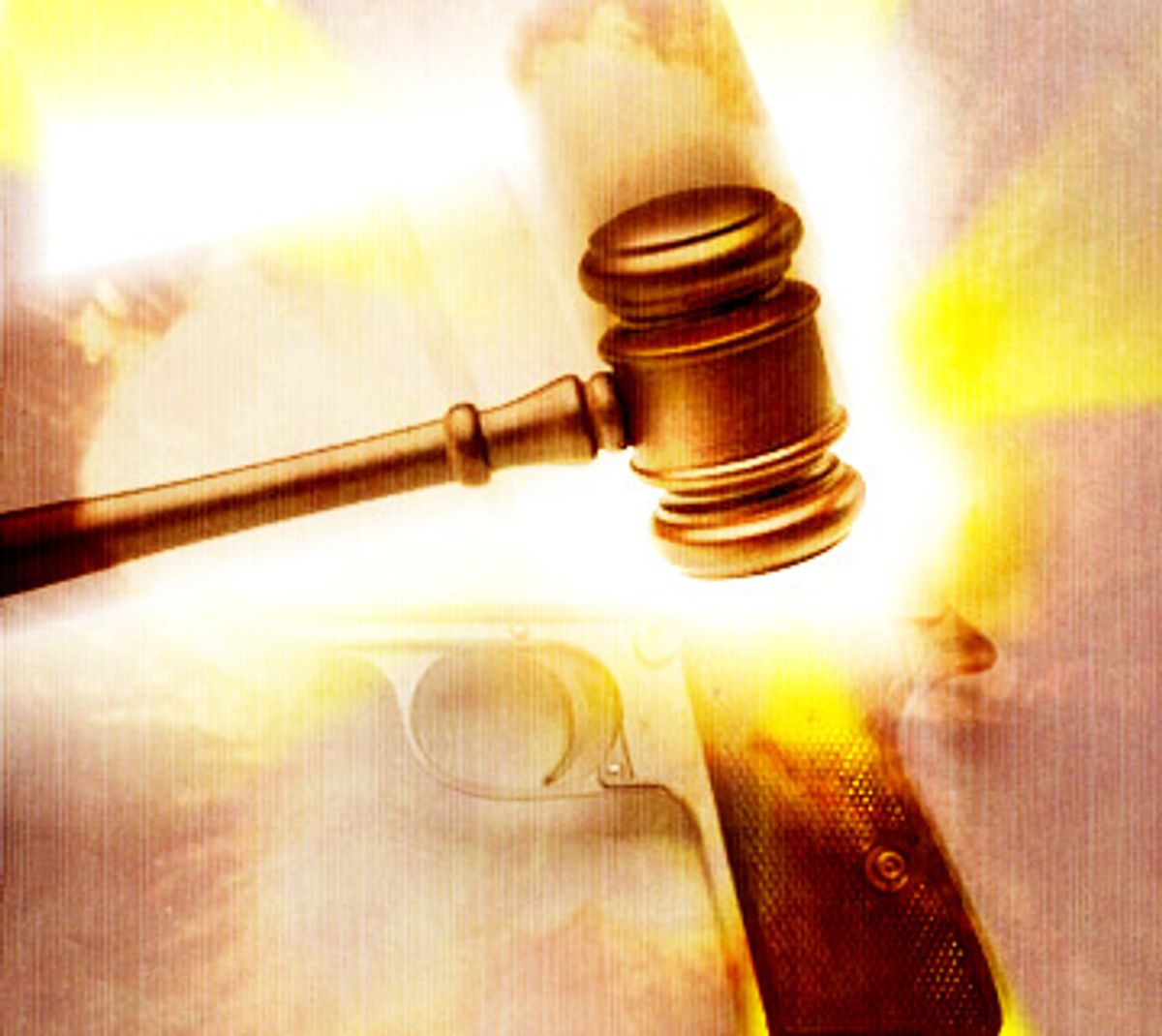 Fifteen unambiguous words are all that would be required to quell the American-as-apple-pie cycle of gun violence that has now tearfully enshrined Virginia Tech in the record book of mass murder. Here are the 15 words that would deliver a mortal wound to our bang-bang culture of death: "The second article of amendment to the Constitution of the United States is hereby repealed."

Even Pollyanna on Prozac would acknowledge the daunting odds against repeal. Steering an anti-gun constitutional amendment through, say, the Montana or Missouri legislatures (approval of three-quarters of the states is required for ratification) would be a task on par with cleaning the Augean stables. But the benefits of separating gun owners from their extraordinary constitutional protections should not be ignored. Without the Second Amendment, firearms could be regulated by the federal government in the same fashion as any other potentially dangerous devices, from coal-mine elevators to single-engine planes. While there is no way to guarantee that another Cho Seung-Hui would be deprived of access to a Glock, hitting the delete button on the Second Amendment surely would lower the odds against future mayhem.

Questioning the very existence of the Second Amendment would also transform the increasingly sterile congressional debates -- when they even occur -- over firearms. Gun control has become one of those quixotic crusades that conjure up noble intentions, overblown rhetoric and political defeat. The cause seems as moribund and musty as a Dukakis sticker on a Volvo. Congress even lacks the political gumption to revive the expired Clinton-era ban on assault weapons, firearms that are more useful for storming beachheads than hunting deer. Instead of regulating guns, the Republican Congress moved boldly in 2005 to shield gun manufacturers from class action suits. And just last month, a federal appeals court overturned the no-nonsense District of Columbia law outlawing handguns as a violation of the Second Amendment.

Despite a decade-long string of such political victories, the National Rifle Association still revels in the apocalyptic imagery of liberal jackboots trampling on the constitutionally guaranteed freedoms of gun-loving patriots. After the Democrats took control of Congress last November, the NRA issued a brochure that began ominously, "Second Amendment freedom today stands naked in the path of a marching axis of adversaries far darker and more dangerous than gun owners have ever known."

Small wonder that liberals have become timorous under fire from the NRA militants. When even the most modest reforms -- such as regulating gun sales between private individuals -- are ridiculed as radical nostrums, it is hard for politicians to justify squandering their political capital on a seemingly hopeless cause. Frustrated by the constraints imposed by the right-to-bear-arms language in the Second Amendment, proponents of gun-control legislation have always worked on the margins. "Close the gun-show loophole" is not likely to be remembered as one of the most stirring slogans in political history.

The result has been a blunt form of cost-benefit analysis among politicians. If federal gun-control efforts mandating background checks and waiting periods do not solve the larger problem of too many unstable Americans shooting first and asking questions later (insert Dick Cheney reference here), why risk political defeat to uphold and expand these modest laws? Even in the battle to save lives from gun violence, senators and congressmen are understandably reluctant to gamble with their own careers.

Since the NRA would probably claim that legislation to ban private possession of atomic weapons is part of a plot to destroy the Second Amendment, maybe it is time for liberals to stop denying the charge. Authenticity and truth-telling often work better in politics than weaselly and palpably insincere statements like, "No one is more dedicated a hunter and lover of the Second Amendment than I am, but..." If gun-control advocates are going to be hanged in effigy for their views, they should at least have the momentary enjoyment of making a speech from the scaffold expressing their true sentiments. Without having to endlessly fret about the constitutionality of any regulatory effort to reduce gun-related deaths, liberals might be able to directly discuss the benefits of such legislation in terms that even open-minded members of the NRA might appreciate.

Looking at the Bill of Rights with more than two centuries' hindsight, it is simply irrational that firearms have a protected position on par with freedom of speech and religion. Were Americans -- liberal or conservative -- writing a Constitution completely from scratch today, they probably would agree that something akin to "freedom to drive" was more far important than the "right to bear arms." The rights of state militias (which many liberal legal theorists argue is the essence of the Second Amendment) are as much a throwback to an 18th century mind-set as restrictions on quartering soldiers in private homes during peacetime (the little-remembered Third Amendment).

At the moment, of course, repealing the Second Amendment seems as politically plausible as welcoming Iraq as the 51st state. But think of how many other causes have gone from the radical to the routine in a single generation. Not even a decade ago, civil unions for gay couples seemed laughably utopian. Now it is the bipartisan middle-ground position in both parties (insert second Cheney reference). When the conservative Federalist Society was founded in 1982 with the goal of combating the liberal tilt to the federal judiciary, not even its founders could have imagined how successful they would be a quarter-century later.

Times change, generations pass and attitudes evolve. As fears of crime recede in many places, nervous homeowners may no longer be obsessed with having a .45 by the bedside to blow away phantom intruders. There is also an implicit racial component here with the bygone Archie Bunker generation having a specific image of exactly whom they feared climbing in a window at night. Even the fearsome NRA may well sharply decline as a political force, much as once-fierce-jawed interest groups like the American Legion and the labor movement have grown increasingly toothless over the past quarter-century.

Against this backdrop, liberals should look at the firearms issue from a long-term perspective, instead of going into a fetal crouch over how gun control will play in the next election. A repeal movement would at best take 15 to 20 years to reach critical mass, so this is not the moment to play litmus-test politics and require White House contenders to take self-defeating positions guaranteed to be excoriated in attack ads in West Virginia. But this would be an appropriate time for overly earnest gun-controllers to rethink their tone and their rhetoric to better understand why their opponents are so politically adept at tarring them as elitists. After all, hunters and marksmen no more need the Second Amendment to practice their sports than archers and race-car drivers require similar constitutional protection.

Rather than ducking a debate with the conservatives over the eternal primacy of the Second Amendment, gun-control backers should embrace it. Since right-wing Republicans are zealously championing constitutional amendments on everything from abortion to a balanced budget, it would take intellectual jujitsu for them to explain why the First Amendment is worthy of improvement (by severing flag burning from free speech), but the Second Amendment unquestionably must remain sacrosanct. For only in Tom Clancy-esque mythology are weekend hunters carrying assault weapons a bulwark against tyranny. Only in a nation forged by 18th century concerns about liberty and states' rights do firearms have a hallowed place in the Constitution.

It doesn't have to be that way. Any more than we as Americans have to continually face the real-life meaning of that gruesome, blood-soaked, gun-toting word "massacre" because of the outmoded language of the Second Amendment.