The priestess of punk talks politics and the power of rock in this interview and podcast. 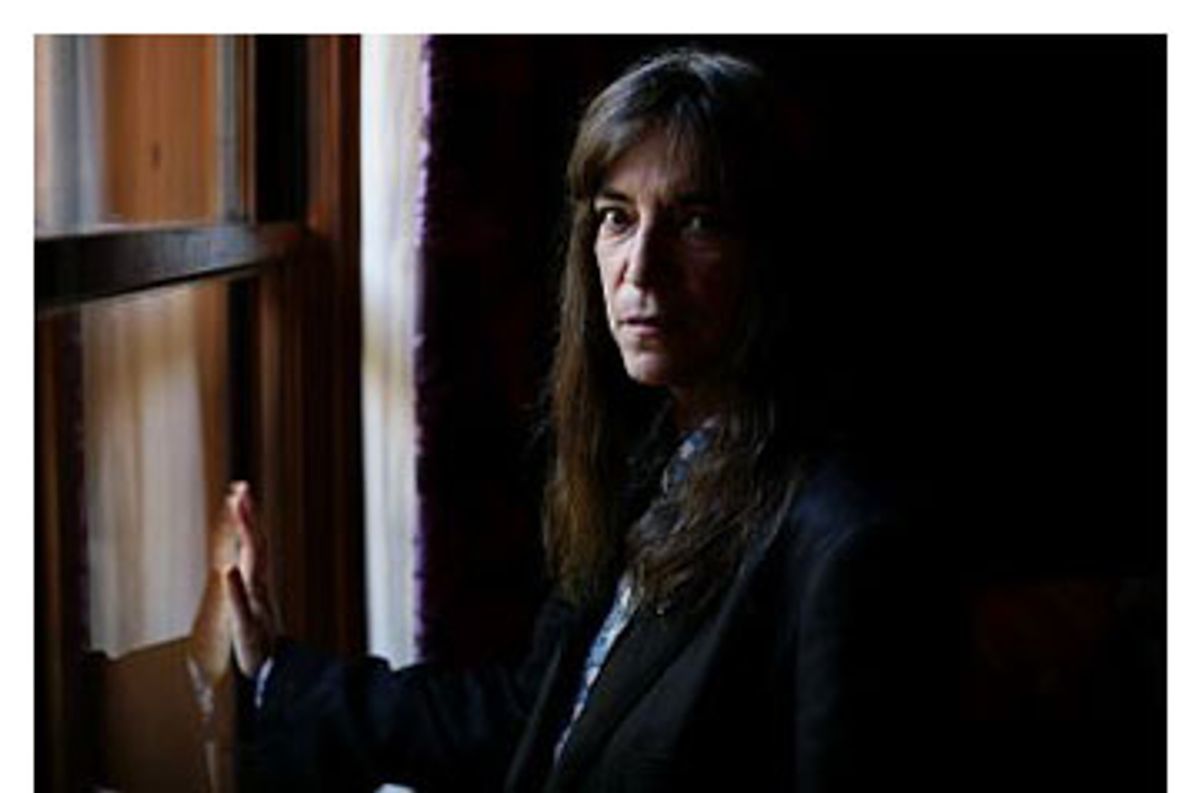 Patti Smith has never been shy about using her words to express how she feels. Consider the first line of her very first album, 1975's "Horses": "Jesus died for somebody's sins but not mine." But on her new record, "Twelve," out April 24, the veteran rocker lets the words of others speak for her.

No willy-nilly collection of personal favorites, "Twelve" is a summation of Smith's feelings on the current state of the world -- a passionate mix of frustration and hope. Featuring her takes on political songs like the Rolling Stones' "Gimme Shelter" and Tears for Fears' "Everybody Wants to Rule the World," as well as era-defining cuts like Jefferson Airplane's "White Rabbit" and Nirvana's "Smells Like Teen Spirit," the album offers a fascinating look at the music that means something to Smith.

A firm believer in the galvanizing power of art, Smith, 60, sat down with Salon in the offices of Columbia Records not long after her induction into the Rock and Roll Hall of Fame to discuss her sense of the country's mood, the Web's profound influence and how music can be an agent of change.

Do you think that rock 'n' roll is less politically effective now that it's culturally accepted?

No. Things are different. When I was younger there was the mainstream and the maverick, and there was a real difference between us. Right now in America, we're a nation of disenfranchised people. All of us are victims, no matter if we're right wing or left wing, of the terrible mistakes of the Bush administration -- whether it's because of the atmosphere he has produced globally, the loss of Iraqi citizens' life and infrastructure, the loss of American life, the abandonment of New Orleans, the deterioration of our environment. And economically the country is heading for a fall.

I think rock 'n' roll is more valuable as an acceptable form of communication because we don't need some cool, hip thing that only a few people understand or communicate about: We need global action. We need a voice. The new generation is communicating, deciding how they're going to receive and send music [on the Web], and the next step is to inject content into it. And they will do that, because things are just going to get worse and worse and people will react. I don't think the new generations are going to be like Nero and fiddle while Rome burns. I think that people are going to step up. It's just that people are finding each other, finding their voice and figuring out how to process all the information around them.

Do you think people are feeling optimistic about their ability to effect change?

I think that people are really getting angry, and they feel they've been lied to and manipulated, and they're ready to do something. But people do get demoralized. I was terribly demoralized before the Bush administration went in to strike Iraq. It was hard to get anybody out there to protest. We had some protests, we went to went to Washington -- we got about 150,000 people -- but the press gave us nothing. I don't know if it was out of fear or disinterest or naiveté. I couldn't believe that no one [in America] really rallied for this. They did in Europe. I marched in Paris with 500,000 people and in London with [more than a million] people.

I talked to Ralph Nader about it and he said anyone who is fighting injustice has to be ready not to win, win, win but to lose, lose, lose. You just have to keep getting up. Because you are going to lose, and lose and lose and lose, until you win or until you make some impact or gather your numbers enough to make change. Right now people are still demoralized, but people are getting more aware.

I think there's an absolute shift in the country in terms of awareness, in terms of feeling manipulated, in terms of looking around and seeing things getting worse and worse and no positive answers. Only 10 years ago it seemed like one of the worst things we had to worry about was whether Bill Clinton screwed some girl or not. It's pretty breathtaking.

Do you think music can spur change or just reflect what's going on?

In the '60s, I feel like the music and the songs evolved because of the conditions happening. There were a lot of antiwar songs, a lot of songs speaking of our human condition and a condition that was evolving -- the drug culture, delving into that and exploring that. So you had songs like "Eve of Destruction" and you also had "Eight Miles High" or "White Rabbit." But in the '70s, our music really grew out of what we didn't have. We were looking around and feeling in '74 that there was no place to play; you were lucky if you got to open for a folk singer at Max's Kansas City. There wasn't really anywhere for anybody to explore new ideas in the context of rock 'n' roll. I thought things had gotten to the point where either you had to be one of these stadium bands like Kiss, or something really artistic and glamorous like David Bowie, or you had to be a folk singer or in a bar band.

That's why we started playing in art galleries or bookstores or wherever we could. That's why [pioneering New York punk-rock club] CBGB was so important. CBGB was like a mecca. It was just a shit hole, but it was our shit hole. Hilly [Kristal, CBGB owner] provided us with this atmosphere where we could merge poetry and rock 'n' roll and political ideas. I never thought about getting a record or making money or nothin'. I just wanted to express myself. Sometimes you have times where the music reflects the current condition and sometimes you have eras where people have to build something new. For the new guard, the Internet is their CBGB and their territory is global. That's where they're playing, that's their club, and their club allows them to explore music in any way they want and to share it.

Can you pinpoint the moment when you went from being an observer of art to a participant?

Yeah, the first reading I did with [guitarist] Lenny Kaye in 1971. I was an apprentice of some very great people -- Allen Ginsberg and William Burroughs and Gregory Corso -- and we talked endlessly of the duty of the poet. My goal was to infuse more blood into poetry, to bring rock 'n' roll into poetry. Not so much to bring poetry into rock 'n' roll -- Jim Morrison had done that, Bob Dylan had done that. For me, it was the opposite.