Not only did the World Bank president find his companion Shaha Ali Riza a cushy job in the State Department, but she received a security clearance -- unprecedented for a foreign national. 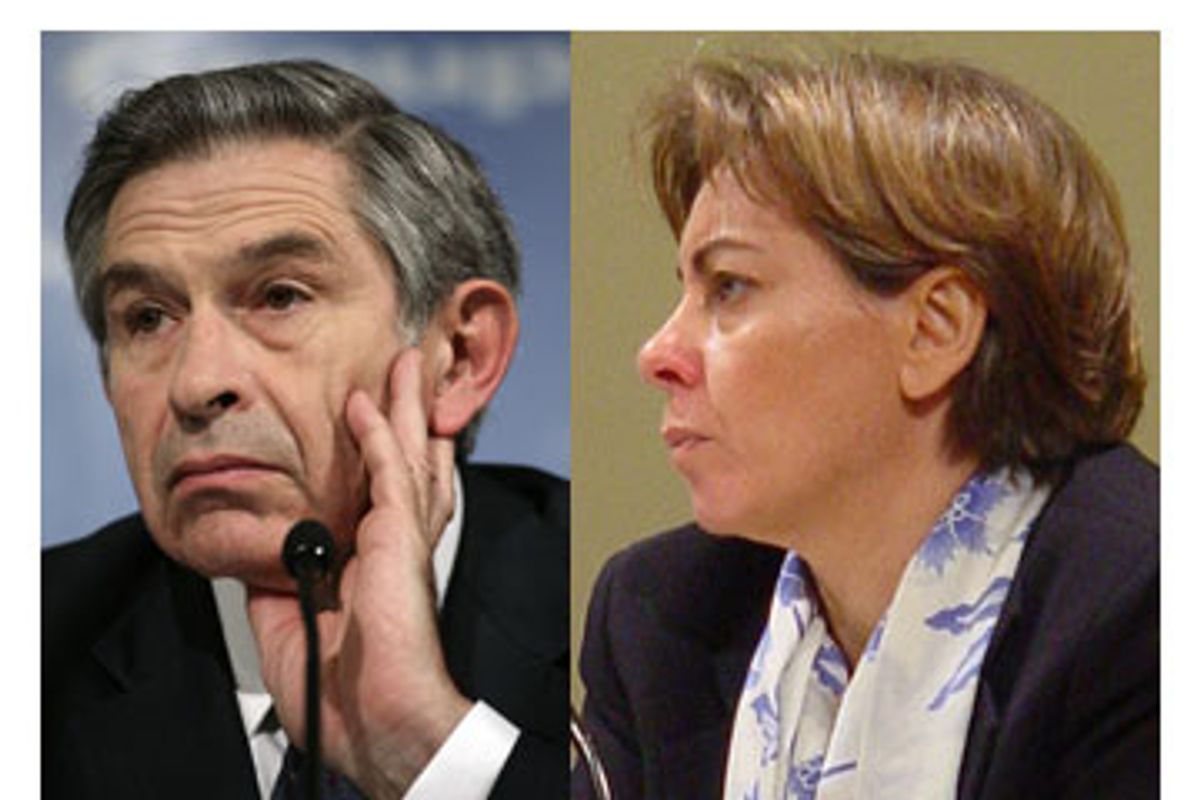 Paul Wolfowitz's tenure as president of the World Bank has turned into yet another case study of neoconservative government in action. It bears resemblance to the military planning for the invasion of Iraq, during which Wolfowitz, as deputy secretary of defense, arrogantly humiliated Army chief of staff Eric Shinseki for suggesting that the U.S. force level was inadequate. It has similarities to the twisting of intelligence used to justify the war, in which Wolfowitz oversaw the construction of a parallel operation within the Pentagon, the Office of Special Plans, to shunt disinformation directly to the White House, without its being vetted by CIA analysts, about Saddam Hussein's alleged ties to al-Qaida and his weapons of mass destruction, and sought to fire Mohamed ElBaradei, director of the United Nations' International Atomic Energy Agency, for factually reporting before the invasion that Saddam had not revived his nuclear weapons program. Wolfowitz's regime also uncannily looks like the occupation of Iraq run by the Coalition Provisional Authority, from which Wolfowitz blackballed State Department professionals -- instead staffing it with inexperienced ideologues -- and to whom Wolfowitz sent daily orders.

Wolfowitz's World Bank scandal over his girlfriend reveals many of the same qualities that created the wreckage he left in his wake in Iraq: grandiosity, cronyism, self-dealing and lying -- followed by an energetic campaign to deflect accountability. As with the war, he has retreated behind his fervent profession of good intentions to excuse himself. The ginning up of the conservative propaganda mill that once disseminated Wolfowitz's disinformation on WMD to defend him as the innocent victim of a political smear only underlines his tried-and-true methods of operation. The hollowness of his defense echoes in the thunderous absurdity of Monday's Wall Street Journal editorial: "Paul Wolfowitz, meet the Duke lacrosse team."

Superficially, Wolfowitz's arrangement for his girlfriend of a job with a hefty increase in pay in violation of the ethics clauses of his contract and without informing the World Bank board might seem like an all-too-familiar story of a man seeking special favors for a romantic partner. Wolfowitz has tried to cast the scandal as a "painful personal dilemma," as he described it in an April 12 e-mail to outraged employees of the World Bank, who have taken to calling the neoconservative's girlfriend his "neoconcubine." He was, he says, just attempting to "navigate in uncharted waters." But the fall of Wolfowitz is the final act of a long drama -- and love or even self-love may not be the whole subject.

Wolfowitz's girlfriend, Shaha Ali Riza, is a Libyan, raised in Saudi Arabia, educated at Oxford, who now has British citizenship. She is divorced; he is separated. Their discreet relationship became a problem only when he ascended to the World Bank presidency. Riza had floated through the neoconservative network -- working at the Free Iraq Foundation in the early 1990s and the National Endowment for Democracy -- until landing a position in the Middle East and African department of the World Bank. The ethics provisions of Wolfowitz's contract, however, stipulated that he could not maintain a sexual relationship with anyone over whom he had supervisory authority, even indirectly.

Back in 2003, Wolfowitz had taken care of Riza by directing his trusted Pentagon deputy, Undersecretary of Defense Douglas Feith -- who had been in charge of the Office of Special Plans and had been Wolfowitz's partner in managing the CPA -- to arrange for a military contract for her from Science Applications International Corp. When the contract was exposed this week, SAIC issued a statement that it "had no role in the selection of the personnel." In other words, the firm with hundreds of millions in contracts at stake had been ordered to hire Riza.

Riza was unhappy about leaving the sinecure at the World Bank. But in 2006 Wolfowitz made a series of calls to his friends that landed her a job at a new think tank called Foundation for the Future that is funded by the State Department. She was the sole employee, at least in the beginning. The World Bank continued to pay her salary, which was raised by $60,000 to $193,590 annually, more than the $183,500 paid to Secretary of State Condoleezza Rice, and all of it tax-free. Moreover, Wolfowitz got the State Department to agree that the ratings of her performance would automatically be "outstanding." Wolfowitz insisted on these terms himself and then misled the World Bank board about what he had done.

Exactly how this deal was made and with whom remains something of a mystery. The person who did work with Riza in her new position was Elizabeth Cheney, then the deputy assistant secretary of state for Near Eastern affairs. And Riza's assignment fell under the purview of Karen Hughes, undersecretary of state for public diplomacy. But these facts raise more questions than they answer.

The documents released by the World Bank do not include any of the communications with the State Department. How did Elizabeth Cheney come to be involved? Did Wolfowitz speak with Vice President Dick Cheney, for whom he had been a deputy when Cheney was secretary of defense in the elder Bush's administration?

Riza, who is not a U.S. citizen, had to receive a security clearance in order to work at the State Department. Who intervened? It is not unusual to have British or French midlevel officers at the department on exchange programs, but they receive security clearances based on the clearances they already have with their host governments. Granting a foreign national who is detailed from an international organization a security clearance, however, is extraordinary, even unprecedented. So how could this clearance have been granted?

But State Department officials tell me that no such letter can be confirmed as received. And the officials stress that the department would never issue a clearance to a non-U.S. citizen as part of a contractual requisition. Issuing a national security clearance to a foreign national under instructions from a Pentagon official would constitute a violation of the executive orders governing clearances, they say.

Given these circumstances, the inspector general of the Defense Department should be ordered to investigate how Shaha Ali Riza was issued a Pentagon security clearance. And the inspector general of the State Department should investigate who ordered Riza's building pass and whether there was a Pentagon credentials transmittal letter.

Wolfowitz's willful behavior, as though no rules bound him or facts constrained his ideas, should not have surprised anyone. At the Pentagon, Wolfowitz was an insistent force behind an invasion of Iraq, bringing it up at the first National Security Council meeting of the Bush administration, months before Sept. 11. For years he had been a firm believer in the crackpot theories of Laurie Mylroie, a neoconservative writer, who argued that Saddam was behind the 1993 World Trade Center bombing and even the 1995 Oklahoma City bombing. After Sept. 11, Wolfowitz pursued his obsession by sending former CIA Director James Woolsey on a secret mission to attempt to confirm the theory. Woolsey came back with nothing, but Wolfowitz continued to believe. His beliefs are stronger than any evidence.

Surrounded by his Praetorian Guard, Wolfowitz insulated himself at the World Bank from the career staff. There, as at the Pentagon, Wolfowitz pushed aside the professionals and replaced them with a small band of politically reliable assistants. Wolfowitz rewarded them, too, on his own authority, with enormous tax-free salaries. Consider Kevin Kellems, his public affairs officer at the Pentagon, who had guided conservative media from that perch and is known as "keeper of the comb," for having been the person to hand Wolfowitz the infamous comb he licked before slicking down his hair in the Michael Moore film "Fahrenheit 9/11." Kellems was given a salary of $240,000, at least equal to what World Bank vice presidents with years of service earn.

Wolfowitz had spent his career staging neoconservative insurgencies against what he considered to be liberal establishments. But at the World Bank he tried to model himself after Robert McNamara, who had turned his presidency at the bank into his vehicle for redemption for his part in the Vietnam War. Wolfowitz, the chief intellectual and policy advocate for the Iraq war, no longer mentioned it. Now he pleads to the World Bank board that his corrupt dealings be overlooked for the greater good of his crusade against corruption. His refusal to resign discredits and paralyzes the institution he had hoped would vindicate him.