A Gonzales resignation is not enough

Congress should demand that a special prosecutor get to the bottom of why the U.S. attorneys were fired. 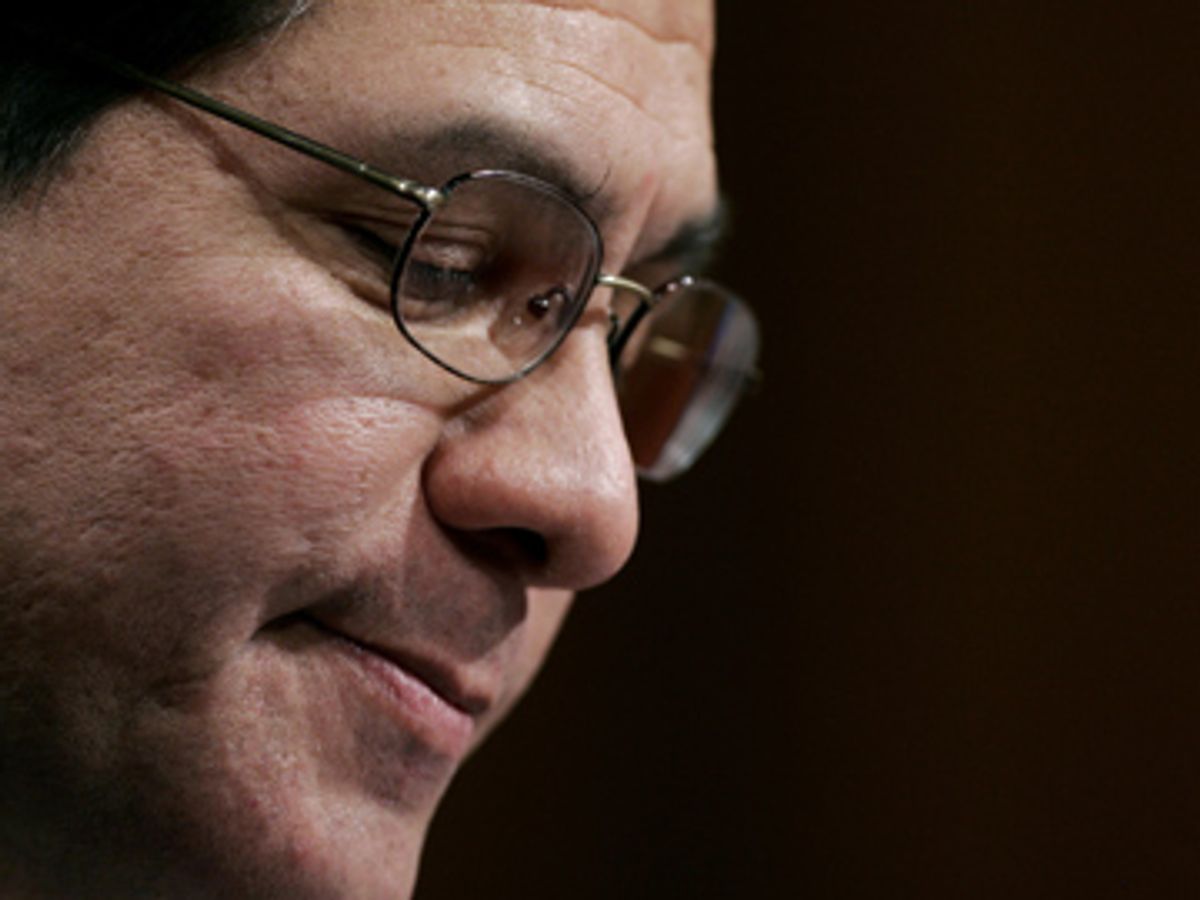 After his disastrous appearance before the Senate Judiciary Committee on Thursday morning, Attorney General Alberto Gonzales -- the clueless, hapless figurehead aptly nicknamed "Fredo" by President Bush -- may soon be gone. Or the president may stubbornly cling to Gonzales, despite his manifest incompetence and dishonesty, which are plainly no obstacle to service in the Bush administration.

Whether the Decider turns thumbs up or down on his pal, however, this must become an accountability moment not only for the attorney general but for all of the ranking Justice Department officials who apparently lied to Congress about the firing of eight <a href="U.S. attorneys. For senators of both parties, many of whom have already expressed their disgust with the misconduct of Gonzales and his aides, there could be no greater insult to the integrity of their institution.

The only way to redress that insult -- and to uphold the constitutional balance of powers -- is to demand the appointment of a special prosecutor to investigate the crimes that may have been committed in the firing of the eight U.S. attorneys and the coverup that followed.

There is little doubt that Gonzales and his aides have sought to mislead Congress about the origins of the scandal. Deputy Attorney General Paul McNulty, Assistant Attorney General William Moschella and former chief of staff Kyle Sampson, like their boss, testified that the dismissed prosecutors were replaced because of unsatisfactory performance. They also testified that the decision to replace those prosecutors was not significantly influenced by White House officials. And they indicated in their testimony that neither the Justice Department nor the White House was seeking to replace those prosecutors without subjecting the new appointees to Senate confirmation.

Yet as Citizens for Responsibility and Ethics in Washington noted in a stinging letter sent by its director Melanie Sloan to Gonzales last month, an enormous volume of documentary evidence sharply contradicts the testimony delivered on various dates by him, McNulty, Moschella and Sampson (who have also contradicted each other). Everyone can't be telling the truth -- and anyone who didn't tell the truth to Congress under oath may be guilty of a felony. Moreover, anyone who tried to influence that testimony in an effort to conceal the truth may also be guilty of obstruction, conspiracy or both.

Consider the testimony of Moschella on March 8, when he told a House Judiciary subcommittee that the list of U.S. attorneys to be dismissed had been compiled within the Justice Department. Only later, he said, was the White House consulted on this sensitive matter. That is the precise opposite of what actually happened. Moschella also assured the subcommittee that he knew what had taken place because he had prepared to answer that question at the hearing. Like McNulty, who had testified in February about the firings, and like Gonzales before him, Moschella insisted that the reasons behind the purge were "performance related."

Astonishingly, despite all the contrary evidence that has emerged since then, Gonzales continued to promote that same discredited line during his Thursday morning appearance in the Senate. As Joshua Micah Marshall noted on Talking Points Memo, Gonzales again suggested that Carol Lam, the former U.S. attorney in San Diego, had been warned by the Justice Department in Washington about her inadequate prosecution of immigration cases. Sen. Charles Schumer swiftly dismantled this blatant fiction, and left the attorney general sputtering. But the telling fact is that Gonzales -- who spent weeks preparing for this appearance in an effort to save his job -- somehow believed that he could lie again and get away with it.

Unfortunately for Fredo, his credibility was shot weeks ago, if not earlier. In their questioning of him, Republican and Democratic senators alike plainly demonstrated that they placed no confidence in him or his oath. But telling him to resign is simply not enough, even if he eventually accepts that advice. Sarcastic asides and angry rebukes are not enough either. If the legislative branch is to regain equal stature with the executive, those who intentionally seek to deceive and mislead the House and the Senate will have to be punished.

It is obvious that the Bush administration has pursued a strategy of deception and stonewalling. Already one former Justice Department employee, Monica Goodling, has taken the Fifth Amendment in order to avoid testifying about her role, while the White House insists that none of the actual authors of the firings and coverup, notably deputy chief of staff Karl Rove, will testify. Millions of e-mails were erased or never logged, in clear violation of the law.

By Friday, the House Judiciary Committee may have voted to grant Goodling immunity in order to obtain her testimony. But members of Congress ought to think carefully before they start immunizing potential witnesses like Goodling, and they should think carefully as well about how they intend to deal with this administration's lawlessness and defiance of its oversight responsibilities.

The answer to Nixonian misconduct is no different now than it was during Watergate. Force the appointment of a special prosecutor and then put all of these public servants under oath in front of a grand jury.