Republicans and Democrats alike pummeled Alberto Gonzales in a daylong hearing that left the future of his job in doubt. 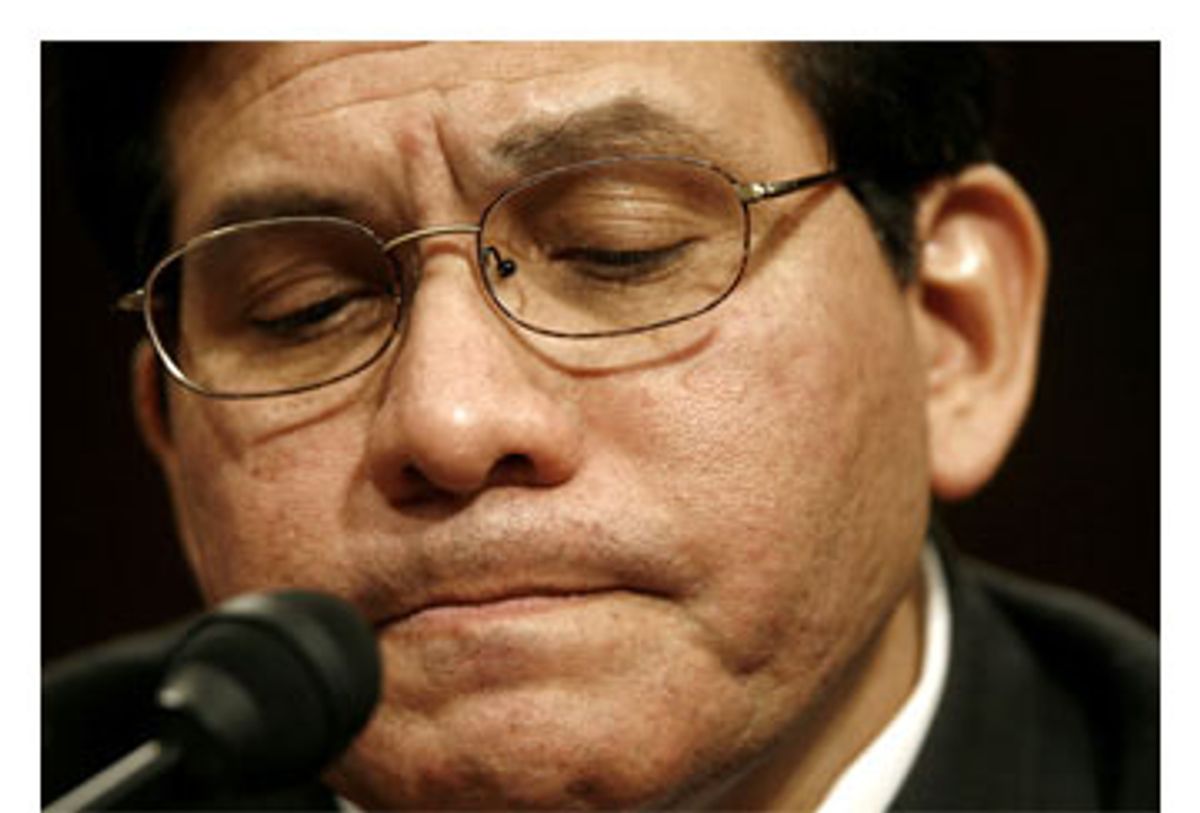 Here's a piece of advice for those Bush administration officials who have not yet been called to atone before Congress: When you take your seat at the long table in the marble-paneled room, just answer the questions as clearly as you can. Don't get smart. Don't talk back. Admit your mistakes. And whatever you do, don't imitate Thursday's performance by Attorney General Alberto Gonzales.

Just minutes into his appearance before the Senate Judiciary Committee, Gonzales was already pushing the wrong buttons, alternately minimizing his sins and overselling his strengths. Pennsylvania's Arlen Specter, the ranking Republican, was talking about a press conference last month, during which Gonzales said he was not involved in discussions over the firing of eight U.S. attorneys, a false claim for which Gonzales has since apologized. "I know you're familiar with this record," Specter was saying, as he warmed up for a question, "because I know you've been preparing for this hearing."

Gonzales had, in fact, been preparing for weeks. But for some reason, he could not just sit still and listen. Like a fifth-grade student unable to avoid talking back to the teacher, he abruptly interrupted Specter. "I prepare for every hearing, Senator," the attorney general said. Then he took a sip of water.

Specter, who once worked as Philadelphia's district attorney, was stopped cold in his tracks. He glared down at Gonzales, who sat hunched before a microphone in an unremarkable charcoal suit and red tie. He would not let the comment pass. "Do you prepare for all your press conferences?" the senator barked, his tone suddenly combative. "You interjected that you're always prepared."

One of eight children born to two migrant workers in San Antonio, Texas, Gonzales had graduated from Harvard Law School, served as a Texas Supreme Court justice and then as the White House counsel, before taking over the Justice Department. As recently as two years ago, he was considered a candidate for the U.S. Supreme Court. Now he sat in a chilly Senate hearing room, sticking his foot in his mouth, while his entire career hung in the balance. The camera shutters clicked.

"I apologize," he eventually told Specter, after several aborted attempts to explain his preparations. The depths of his mistake had finally sunk in. Gonzales had picked a fight with one of the only Republicans on the panel who still expressed any sympathy for him. He had come to Congress to apologize for messing up in public statements, and here he was messing up again. "I'd like you to win this debate," Specter said, "but you're going to have to win it."

By the day's end, it was hard to see that Gonzales had won anything. The U.S. attorney scandal, which is still unraveling, appeared as likely as ever to significantly stain Gonzales' tenure at Justice, if he doesn't resign in the coming weeks. He was criticized by every Democrat on the committee, as well as most of the Republicans, who often delivered the most stinging rebukes.

"Your ability to lead the Department of Justice is in question," said Alabama's Jeff Sessions, who normally toes the White House line.

By the time the floor was given to Oklahoma's Tom Coburn, one of the most conservative members of the committee, everything seemed to be headed south for Gonzales. "It was handled incompetently," Coburn said about the group firing of the attorneys. "It's generous to say that there were misstatements. That's a generous statement. And I believe you ought to suffer the consequences."

With that, Coburn joined New Hampshire's John Sununu and Oregon's Gordon Smith to become the third Republican senator to openly call for the resignation of Gonzales. His reasoning had a simple elegance to it. Gonzales had told the committee that several of the eight U.S. attorneys had been fired for management problems. Kevin Ryan was dismissed in California for "poor management in the office," said Gonzales. Michigan's Margaret Chiara had been fired for "poor management issues, loss of confidence by career individuals." By arguing that "management" ability was the rationale for firing, Gonzales effectively laid the planks for his own gallows. "Why would we not use the same standards to judge your performance in handling this event that you applied to these same individuals," Coburn asked. The Democrats were even more direct. As Sen. Chuck Schumer, the New York Democrat, put it during the lunch recess, "The great irony is the U.S. attorneys being fired end up being far more qualified for their job than [Gonzales] is for his."

As it stood, Gonzales did not bring many answers with him to the committee room. He could not identify the specific individuals who had recommended firing the eight attorneys. He offered no significant insight into the role of the White House. He could not remember any details from a meeting he participated in less than five months ago. In fact, he admitted that he did not even know the reasons he fired several of the attorneys, when he signed off on the plan late last year.

Before lunchtime, he said the words "I don't recall" 39 times. Even his written statement appeared to provoke the ire of several senators. After Gonzales described his involvement in the process as "limited," Specter challenged him with the fact that there were at least five documented meetings in which he had discussed the attorneys' performance with his staff. "As we recite these, we have to evaluate whether you are really being forthright," Specter said.

Rather than concede the point, Gonzales attempted to establish that he used the word "limited" in the context of the many things he does every day. "You are talking about a series of events that occurred over approximately 700 days," Gonzales said. "I probably had thousands of conversations during that time." None of the senators seemed impressed.

Such talk has been a trademark of the Bush administration, which has always resisted admitting mistakes. But in this new era of Democratic control, there appears to be a bipartisan consensus forming that the old tactics of evasion and deflection have run their course. Since the beginning of the year, Republicans have resisted directly signing on to Democratic investigations into the White House's handling of everything from the Iraq war to global warming. But Republicans have joined with Democrats in demanding full and honest answers to their questions. As Specter explained at the end of the hearing, "Your credibility has been significantly impaired because of the panorama of responses you have made."

Gonzales' struggles on Thursday will fade soon enough from the headlines. But whatever his fate, he will not be the last Bush official to face a grilling under oath. And those who come next may find the U.S. attorneys debacle instructive: Tell the story straight, or suffer the consequences.