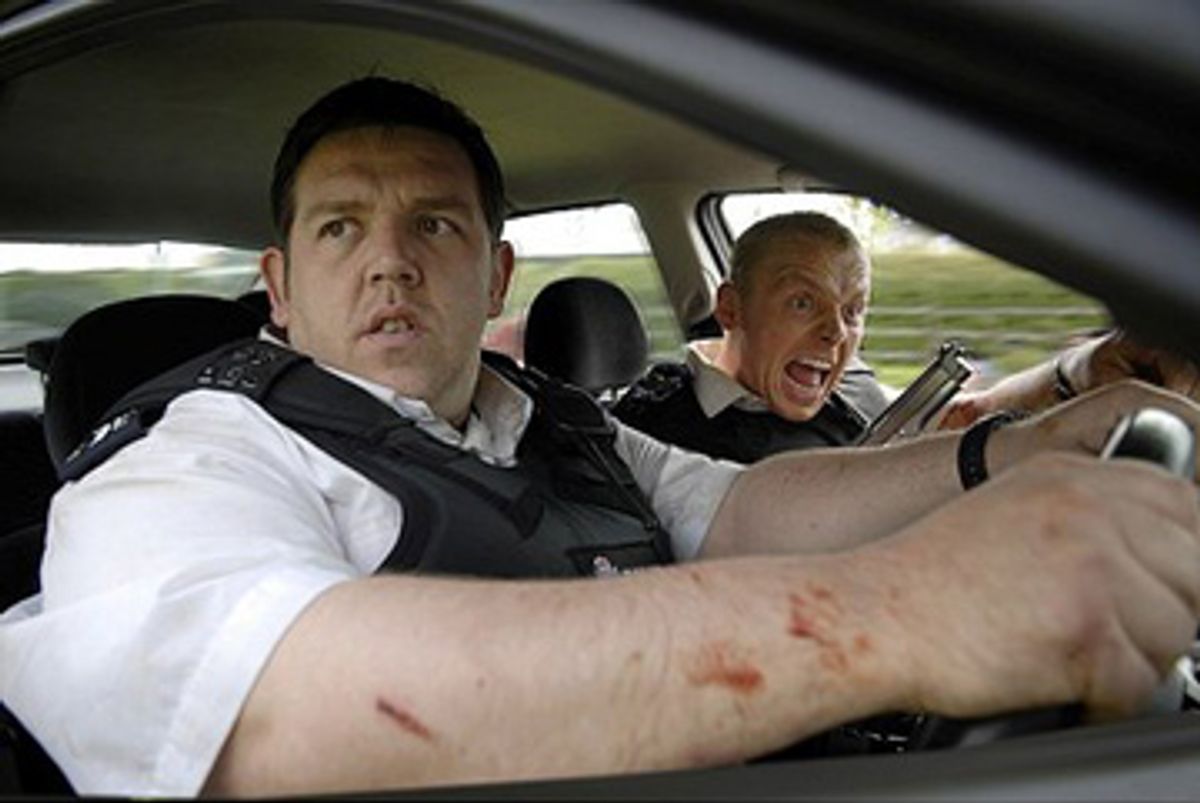 There's a moment in Edgar Wright's "Hot Fuzz" when Simon Pegg's Nicholas Angel, a police sergeant who's recently been transferred from London to a sleepy country village, fields a phone call from a distraught citizen: The fellow's swan has gone missing. Angel dutifully begins taking down the man's name -- P.I. Staker -- and stops short as he sounds out the syllables and pieces them together. He berates the caller for wasting his time and hangs up: Cut to Angel standing next to a mild-mannered country gent on the man's swanless property, bravely attempting to hide his awkward embarrassment as he asks Mr. Staker when and where the itinerant fowl was last seen.

I'm not sure if that gag is brilliant or kindergarten-simple, but I have a sneaking suspicion that it's both. "Hot Fuzz" is an action-packed comedy set in a part of the world where nothing ever happens, a Hollywood-style cop movie transferred to the English countryside. Angel has been so good at his job in London -- he has the highest arrest record of all his colleagues, and survived a palm wound at the hands of a knife-wielding Father Christmas -- that his superiors have rewarded him by dispatching him to the dozy village of Sandford. The jolly, wholly useless police chief, Frank Butterman (Jim Broadbent), shows Angel around police headquarters, including the riot-gear room, a jumble of sad-looking batons and special helmets covered with dust. I'm not sure, but was that a hedgehog I saw sitting placidly among these antique accouterments?

That hedgehog, or whatever the heck it was, is key to the spirit of "Hot Fuzz." The picture was co-written by Wright and Pegg, the exploding brains behind the massively successful 2004 zombie-comedy "Shaun of the Dead"; Nick Frost, who co-starred with Pegg in that picture, reappears here, as Angel's sluggish, dim-bulb partner, Danny Butterman (the police chief's son). "Shaun of the Dead" had a dizzying, freewheeling quality, like a movie made without parental supervision. "Hot Fuzz" may not quite hit the same level of raucous mayhem. But I think it's even sharper and funnier, and Wright and Pegg never run out of ideas: The movie is streaming with them, and just when you think there really can't be anything left to laugh at, a baddie holds a gun to a poor, runty redheaded kid and sneers, "Stay back, or the ginger nut gets it!"

Wright and Pegg are masters at balancing great, dumb, obvious jokes with ticklish, oblique ones, gags that zing by, only half-glimpsed, like that possible hedgehog. Even when one of the uptight town busybodies, eager to run common street performers out of the town square, declares, "If we don't get rid of these clowns, we're going to be up to our balls in jugglers!" his outrage is so palpably sensible that it takes a split second for the absurd, vaudeville-style pun to hit home.

The filmmakers clearly had great fun translating Hollywood-style cop-movie excess to the uniformed English policemen, known for not carrying firearms and for wearing quaint-looking hats, sometimes trimmed with checkerboard bands. At one point Danny, convinced that Angel, having worked in London, has seen all the action and excitement he longs for, describes his favorite scene from the Keanu Reeves-Patrick Swayze dazzler "Point Break." "Have you ever fired a gun in the air and gone, 'Yah! Yah! Yah!'?" he asks plaintively. He longs for the discharging of weapons, for car chases -- "proper action and shit."

Angel, of course, is having none of it: He's just there to do his job, not to fire guns and stuff. Or so he thinks. Pegg plays Angel as efficient and officious, dedicated to keeping the peace, not stirring up trouble. In an early scene, he busts a bunch of underaged kids for drinking at the local pub. (Once they're cleared out, the place is empty.) Part of the gag is that, with his roundish head and vaguely protruding ears, Angel doesn't look much older than they do. Pegg is wonderful here -- he delivers his lines straight, but there's always a subtle curve built in -- and Frost is his perfect foil: Danny is always two beats behind Angel, which sometimes actually puts him two beats ahead. Frost and Pegg, longtime friends in real life, are so attuned to each other that their rhythms have the pleasurable ease of a soft-shoe dance routine.

The ensemble cast around them is lavish: This may be a small town, but it's hardly underpopulated. Timothy Dalton plays a slick grocery-store owner; Paddy Considine is a grumpy undercover cop; Billie Whitelaw -- who appeared in "The Omen" but who's better known as a stage actress, closely associated with the work of Samuel Beckett -- plays a passive-aggressive innkeeper. Wright uses these characters to send up the pompousness of small-town people who insist on keeping everything exactly as it is, even as he understands that some things desperately need preserving. (You don't put the Kinks' "Village Green Preservation Society" on the soundtrack of your movie if you don't understand the inherent conflict between progress and preservation.)

"Hot Fuzz" is at once deeply affectionate and sharply observed: There's never anything smart-alecky about Wright's approach as a director. You can see that even in the faux trailer he directed as part of the Rodriguez-Tarantino double feature "Grindhouse," for a horror number called "Don't," whose dialogue consists mostly of that single, ominous word, repeated so many times that it stops being funny, and then gets even funnier. As filmmakers, Wright and Pegg trust in both our intelligence and our capacity for silliness: They're convinced the two don't have to cancel each other out. Instead of talking down to us, their audience, they trust us implicitly. Maybe, once in a while, they are taking the piss. But how can you fault them, when they give so much back in return?