"In the Land of Women"

Adam Brody of "The O.C." stars alongside Meg Ryan in this ultra-gentle picture about life and love. 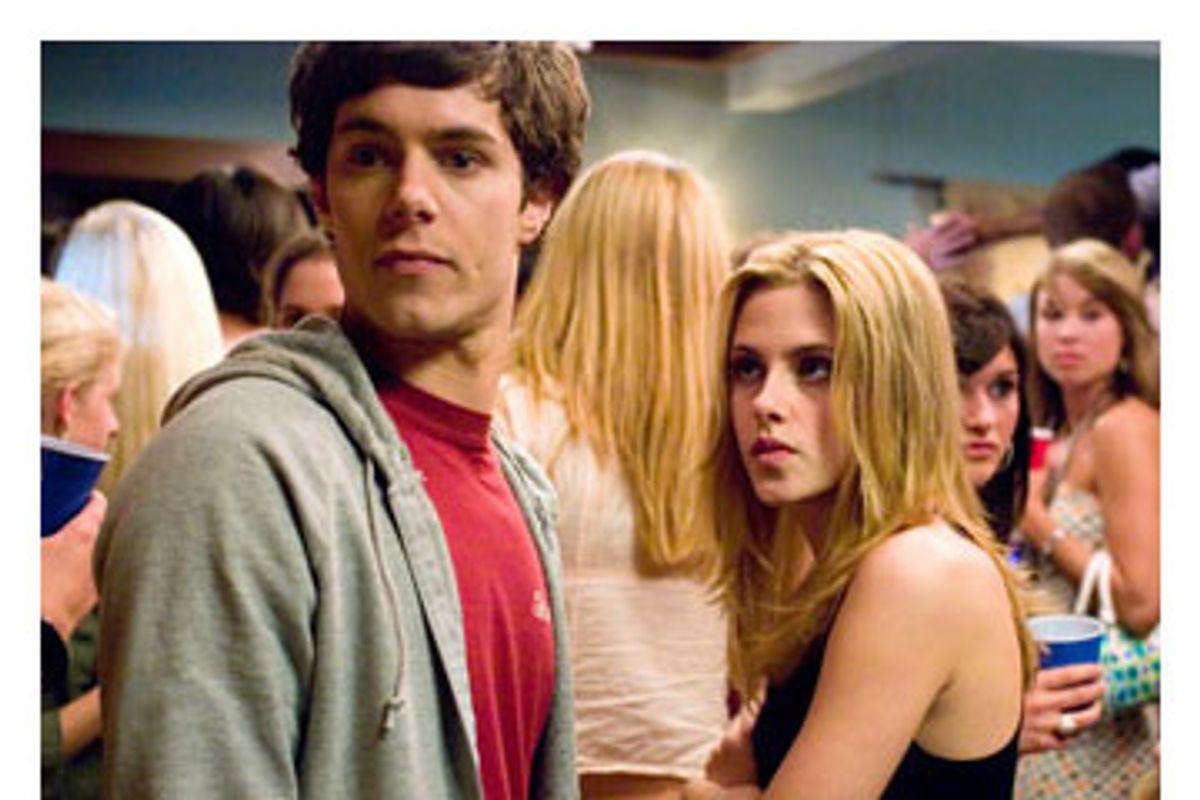 Jonathan Kasdan's "In the Land of Women" is a gentle, sweet-spirited picture about the bewildering qualities of love, about the conflicts that arise in families even when everyone (or nearly everyone) has the best of intentions, about how it's possible to reinvent and reenergize a life. The problem is that the picture is so gentle, it barely leaves an impression.

Carter gets along OK with Phyllis -- as Dukakis plays her, she's cranky in the way that isn't cute, although with her sailor-on-shore-leave mouth, she's occasionally funny -- but he also needs relief from her stifling eccentricities. He's grateful, and intrigued, when he meets neighbor Sarah Hardwicke (Meg Ryan), a wife and mom who tentatively strikes up a friendship with him and also urges her teenage daughter, Lucy (Kristen Stewart), to ask him out to a movie. It's clear she's attracted to him herself, but unwilling to deal with how inappropriate that might be.

"In the Land of Women" -- Kasdan wrote the script as well as directed -- shows characters getting through some pretty bad stuff, and making connections where they least expect them. Kasdan (son of director Lawrence, brother of director Jake) is more interested in how characters interact than in what happens to them -- he uses dialogue, rather than events, to shape his movie. Maybe that's a luxury available mostly to young directors with famous dads, but that doesn't detract from the reality that Kasdan has used the resources available to him to make a thoughtful, subtle movie, rather than a flashy one. Still, the picture needs more sticking power: Kasdan hasn't figured out how to give the story dramatic gravity without necessarily ratcheting up the pathos. Then again, that's the sort of thing a young director has plenty of time to work on.

Kasdan may also have a knack for working with actors: There are several good performances here, and the cast seems to be relaxed and in tune with one another. At the beginning of the movie, Kristen Stewart's Lucy has that suitably hard, unreadable teenage look -- she's got that sign on her forehead that says, "Go Away" -- but by the end, all that hardness has melted, suggesting that Stewart knows how to shepherd a character through growth and change.

Meg Ryan is a more difficult case: Just as Ryan was starting to get more interesting roles -- or, perhaps more accurately, beginning to make something interesting out of the roles she was getting -- she dropped off the scene. (Her last picture was the hugely entertaining 2004 "Against the Ropes.") Ryan works hard here, and she gives her character some intriguingly sharp edges. But we're at a point where we're not supposed to notice when an actress of a certain age -- or even an actress who's younger than a certain age -- somehow looks "different." Ryan does have a few forehead lines, though she seems to need to make an effort to summon them. But her lips don't quite look like her own. The issue of actresses and plastic surgery is a delicate one: It's unfair to accuse an actor of messing with his or her face without also addressing the reality that in Hollywood, age is a greater enemy than it ever has been. Even so, with actors making changes at a younger and younger age, we have to ask what kind of skin, and what kind of expressiveness, these performers are going to have left to work with when they're 60 -- or even, in some cases, 50.

Adam Brody doesn't have to worry about that -- at least not just yet. I think many fans of "The O.C." -- that is, those of us who enjoyed the show before it slipped into its decline (and kept watching even when it did) -- are wondering if Brody, so immediately identifiable as the nerdy, seemingly overcaffeinated Seth Cohen, is going to have any sort of life after TV. The answer, or at least what I hope will be the answer, is yes. There will always be a little Seth Cohen in Brody, and that's not a bad thing: He appears to be the kind of actor who knows how to make nervous energy work for him, and maybe one of the keys to doing good work, long-term, is the ability to harness an inexhaustible resource.

Brody's Carter Webb carries numerous echoes of Seth Cohen, showing, most notably, a love of the sardonic, with a tendency toward smart-aleckiness. But Brody also knows how to temper his potentially obnoxious qualities with shades of insecurity and uncertainty, and the equation works. Brody, with his pipe-cleaner limbs, still has some adolescent gawkiness in him, even though he's in his 20s -- it's simply a part of who he is, and he neither exaggerates it nor downplays it. He has a lovely scene in which he listens to Lucy complaining about her mom, even though he also knows, and is sympathetic to, Sarah's side of the story. The two are lounging around outdoors on a warm evening. Carter smokes a cigarette as he listens to Lucy pouring out her teenage tale of woe. The look on his face is one of deep empathy tempered with hard-earned, grown-up common sense; even though he has to allow this young woman her confusion, he also wants to help her grow beyond it. The scene is the kind of small moment that shows what actors are made of. "The O.C." may be over, but Adam Brody isn't.