"Syndromes and a Century"

A Thai filmmaker paints a rapturous, flowing picture of his parents' pre-love story. 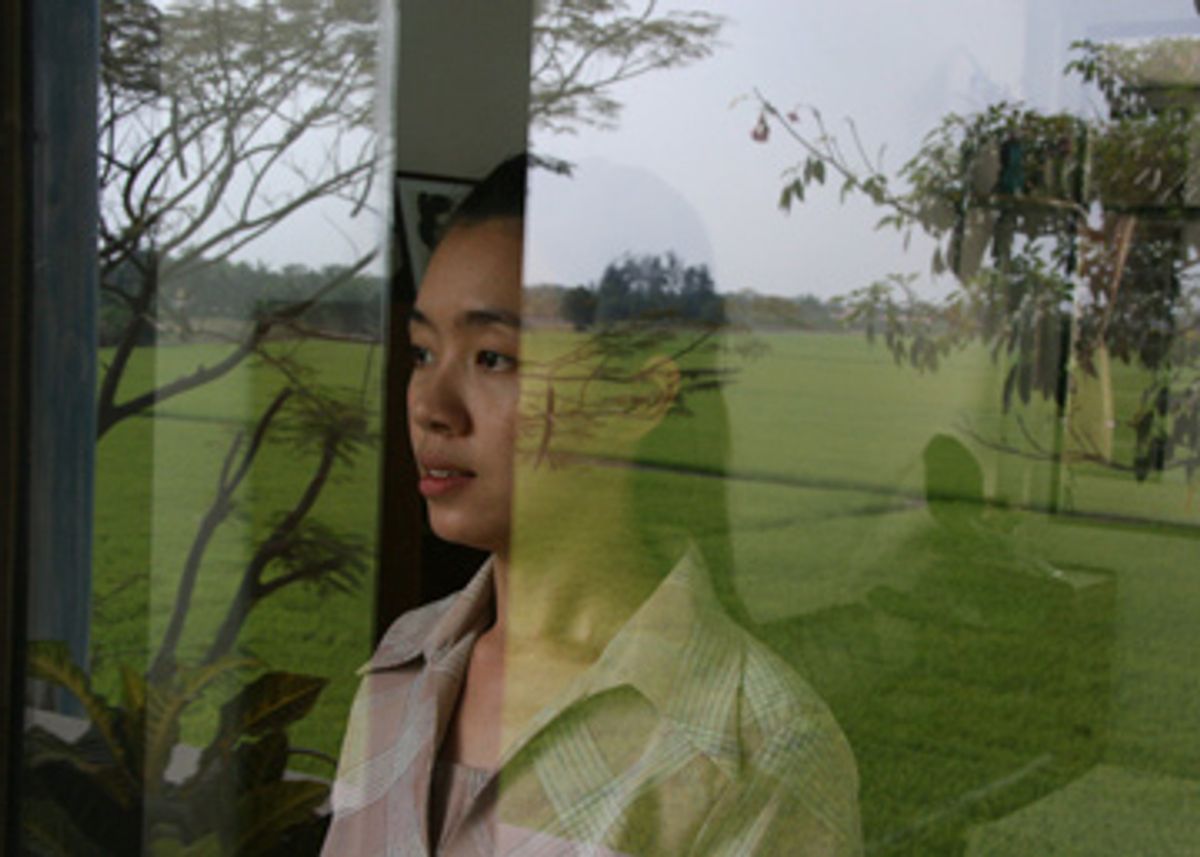 There are some filmmakers whose work demands that you slip out of your regular life and into a completely new time zone, one that has no relation to Greenwich Mean Time. Apichatpong Weerasethakul -- the young Thai filmmaker who more commonly goes by the name Joe -- is one of those filmmakers, a director who can confound you if you try to read his work too literally. It's easy to become lost both in and by his movies, and it's possible to be baffled by a particular detail on first viewing only to find it makes some sort of perfect sense on the second -- or vice-versa. When I've written about Joe's work in the past, I've received angry e-mail from readers who say they tried to watch a Joe movie and were bored out of their skulls. As with all films that don't cling to strict narrative structures, one person's rapturous, pointillist dreamscape is another's "Thanks, but no thanks."

Still, I find myself wanting to turn more people onto Joe's movies, and his latest, "Syndromes and a Century" (which is currently playing in New York, at the IFC Center; with luck, dates elsewhere in the country will follow), is no exception. Joe's last picture, the lush, verdant 2004 "Tropical Malady," told two meshing stories, one about the unfolding romance between a young soldier and a country boy, the other about a man-turned-tiger who restlessly prowls the forest. A love story and a luminous folk tale, "Tropical Malady" is a whole formed of two strange parts that fit together like unlikely lovers.

"Syndromes and a Century" has a similar structure, if "structure" is what you want to call it. And it's also a love story, although it may be more accurate to call it a pre-love story. Joe wrote "Syndromes and a Century" to tell the story of his parents, to capture something of their lives before he was born, before they even met. The first section is set in the Thai countryside, a wonderland of hefty green fronds quivering in the breeze, of obliviously happy twittering birds, of wild orchids that hang strangely from the trees like fruit from another planet. There's a hospital there, where a young physician, Dr. Toey (Nantarat Sawaddikul), goes about her daily business. She interviews an army-trained doctor, Nohng (Jaruchai Iamaram), who is about to come to work for the hospital, grilling him with psychological-test questions ("What does DDT stand for?"). Later, she treats an elderly monk (Sin Kaewpakpin), who comes to her complaining of aches and pains, and tells her that chickens appear to him in his dreams, telling him that they're angry with him and they want him to suffer. (As a kid, he used to break the legs of chickens because their clucking annoyed him.)

A young man, Toa (Nu Nimsomboon), waits for Toey to finish her appointments. They go out to sit beneath a tree-shaded table outside (like much of "Tropical Malady," the first half of "Syndromes and a Century," which was shot by Sayombhu Mukdeeprom, is filled with mystically beautiful sunlight), and when Toa confesses his love for her, Toey launches into a rambling story about Noom (Sophon Pukanok), an orchid expert she once met. Toa, semi-comically, clunks his head on the table in despair.

The focus shifts from character to character, leaving each vignette unresolved, uncertain. A singing dentist, Ple (Arkanae Cherkam), treats a young Buddhist monk, Sakda (Sakda Kaewbuadee, who also played the country boy in "Tropical Malady"), who confesses that he'd always wanted to be a DJ, and also to run a comic-book store. The two flirt, innocently, when Ple performs at a fair on the temple's grounds. Ple gives Sakda a CD he's recorded: "Normally, I sing about teeth and gums. But this album is all love songs."

There's a great deal of light, and levity, in the first section of "Syndromes and a Century." It's set sometime in the past, while the second half of the picture, which takes place in a city hospital instead of a country one, has a much more modern, urban feel. In the second part of "Syndromes," we meet some of the same characters: The elderly monk returns, this time speaking with a different doctor. Dr. Toey is here as well, and once again her prospective suitor, Toa, waits for her, hoping to win her. But in this half, we see more of Dr. Nohng, the army doctor we met only briefly at the very beginning of the movie. Now, he wanders this sprawling urban hospital with an old friend; they go down to the physical-therapy ward, where they visit with an older doctor, Wan (Wanna Wattanajinda), who often goes on television and has a belt of liquor beforehand to bolster herself. (She stashes the bottle in a hollow prosthetic leg, for safekeeping.) Nohng has a lovely girlfriend, Joy (Jarunee Saengtupthim), who has come to visit him. They kiss in the doctors' locker room, gently intense kisses that suggest they're deeply in love. She tells him she's hoping to work in another city, a bigger, even more modern one. He asks her if, perhaps, he should seek a transfer, so he can go with her.

That question, like every other question in "Syndromes and a Century," goes unresolved, although we can guess that Nohng's future isn't with Joy, but with Toey. As human beings, we're geared to desire an actual plot in our movies, and I regret to inform you that nothing really happens in "Syndromes and a Century" -- and yet the experience of the movie is all about the not happening.

Joe has said, "The mind doesn't work like a camera. The pleasure for me is not in remembering exactly but in recapturing the feeling of the memory -- and in blending that with the present." The suggestion is that Nohng and Toey are dream-memory versions of Joe's parents: He can't, of course, have known them as young people, so he has to slip back in time to paint them, as their younger selves, with watercolor washes of imagined memory. We're present at their first meeting -- but neither we nor they know that they're destined to connect, to marry. Joe uses very few close-ups in "Syndromes and a Century." Most of the encounters between characters -- between Toey and her hopeful suitor, between the monk Sakda and his singing dentist -- are captured in medium long-shot. That doesn't distance us from the characters; if anything, it reminds us that we're looking at them through Joe's veil of imagined memory.

That approach works perfectly with Joe's style of storytelling, which is anything but linear. He likes to send his plot details floating downstream, letting them end up where they may. We never find out what happened between the shy monk and the singing dentist. And perhaps their story ends exactly where we left them in the first section of "Syndromes and a Century," leaning against a railing on a warm evening, the sound of their conversation drifting out into the night air. But that moment, at least, is a love song. Teeth and gums momentarily forgotten, this one is all about the heart.