The 2008 election, explained by Yogi Berra

Everything you need to know about the presidential race has already been predicted by baseball's greatest sage. 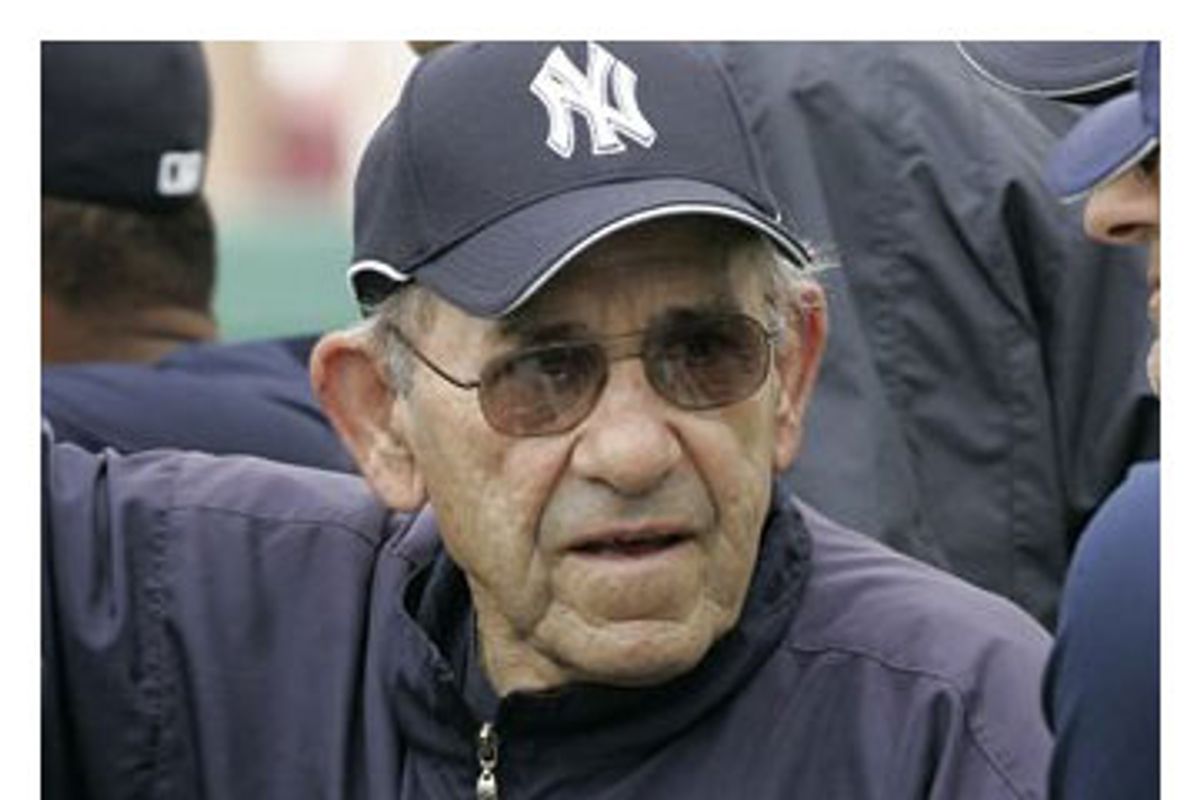 Ever since 16th century pollsters and media consultants discovered Machiavelli, political handlers have been searching for the right strategic thinker to guide them in wooing voters. Sun Tzu on "The Art of War" has often been in vogue, especially among hawkish Republican operatives.

But for pure political insight -- now more than ever with the wide-open presidential races in both parties -- there is no one to match Yogi Berra, Hall of Fame catcher for the New York Yankees and reigning philosopher of baseball. Here is how selected Yogi-isms can explain contemporary politics:

"I wish I had an answer to that, because I'm tired of answering that question."

Instead of claiming amnesia, Alberto Gonzales would have been shrewder to emulate this kind of candor during his hapless appearance last week before the Senate Judiciary Committee. The virtue of the Yogi quote book is that its wisdom is bipartisan. Hillary Clinton could also resort to this honest approach every time she is tempted to give a convoluted answer about her vote authorizing the Iraq war.

This might as well be the slogan of the fast-deflating John McCain campaign. With disappointing fundraising numbers and drooping polls, the defrocked GOP front-runner is on his way to being benched by Republican voters.

"When you come to a fork in the road, take it."

Perhaps because of his baseball background, George W. Bush (aka "the Decider") is a master at this. Regardless of the consequences make a decision, any decision. This is about leadership.

"Third base ain't so bad if nothing is hit to you."

With the Republicans swooning over a possible campaign by former senator and current actor Fred Thompson, it is easy to forget that presidential politics is a brutal testing ground for ill-prepared dream candidates. Recall what happened to neophyte Wesley Clark when he made a late entry into the 2004 Democratic race.

"Nobody goes there anymore. It's too crowded."

Yogi's succinct restaurant review underscores the risks for Barack Obama if the novelty of his charismatic candidacy begins to fade. At the crest of a wave in the fall of 2003, Howard Dean was collecting major endorsements (Al Gore, unions like the SEIU) on a daily basis. The result? Many prominent Democrats decided there was no room for them in the Dean movement and migrated elsewhere.

As they rehearse for the kickoff Democratic debate in South Carolina this Thursday, the second-tier candidates (Bill Richardson, Chris Dodd and Joe Biden) are undoubtedly fantasizing about their breakthrough TV moment as they mix it up with Clinton or Obama. It isn't likely, since the .200 hitters of politics are generally politely patronized and ignominiously ignored at debates.

"He's a big clog in their machine."

That may be the inadvertent role of Bernie Kerik in the Giuliani campaign. Kerik -- a Rudy protC)gC) and the former New York police commissioner -- has been warned by federal prosecutors that he is likely to be indicted on felony charges, according to the Washington Post. If Giuliani's campaign is premised on his unerring judgment and his national-security leadership, what was Rudy doing boosting Kerik to head the Department of Homeland Security?

"I really didn't say everything I said."

The ultimate defense of a presidential candidate (or shock-radio host) in trouble. Biden certainly had need for this line when he flubbed the kickoff of his presidential campaign by describing Obama as "clean" and "articulate."

"You can't think and hit at the same time."

This is Yogi's admonition that you should be guided by instinct. In the mouth of a presidential candidate, this sentiment becomes, "I don't read the polls."

"A nickel ain't worth a dime anymore."

Presidential politics is caught up in a frenzy of inflation reminiscent of the Weimar Republic or, at least, the Carter administration. Six candidates corralled more than $10 million each in the first quarter of 2007, a fundraising feat that only Dean pulled off anytime in 2003. But as Dean learned to his regret, there is only a finite amount of money that can be spent in places like Iowa before you start antagonizing the voters you want to woo.

"It gets late early out there."

The nine months until the Iowa caucuses is a long enough gestation period to give birth to almost any political scenario. But unless the long-shot candidates begin to raise the necessary money to compete in the early states, they may find themselves prematurely bathed in shadow.

"We're lost. But we are making good time."

This is precisely the situation that the Democratic nominee may face if he or she goes into the 2008 campaign without having defined a message beyond being anti-Bush and anti-Iraq war. No matter how beguiling the polls are for the Democrats at the moment, a candidate doesn't get to the White House without having mastered that "vision thing."

Or to quote once more from the Gospel According to Yogi: "You've got to be careful if you don't know where you are going, because you might not get there."

Rick Ridder, who was Howard Dean's first campaign manager during the 2004 presidential race, is a Denver-based political consultant.