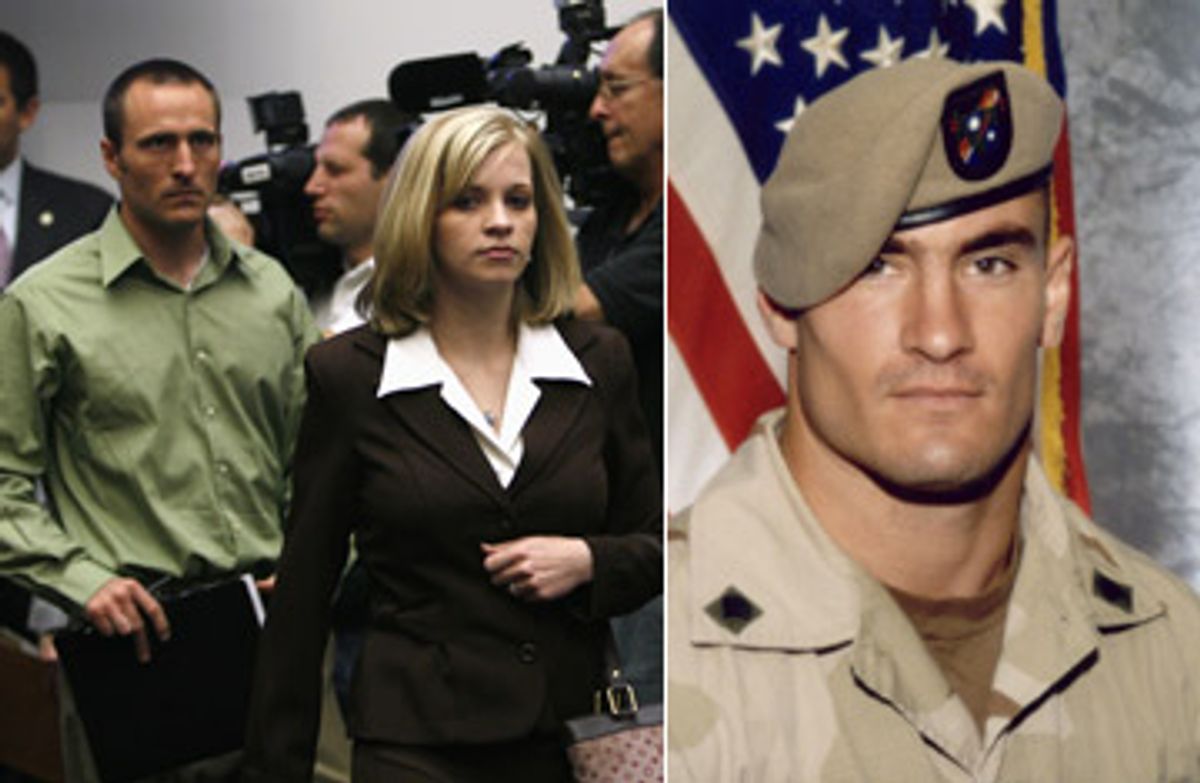 Just as I finished writing yesterday about Virginia Tech and life's random cruelties, we got the news that David Halberstam died in a car crash. I can't do a better job than Glenn Greenwald did paying tribute to Halberstam's courageous journalism.

We got to witness another kind of courage Tuesday, when Army Ranger Bryan O'Neal told the House Committee on Oversight and Government Reform that he was ordered to cover up the friendly fire death of former Arizona Cardinals safety Pat Tillman in Afghanistan. Tillman, you'll recall, joined the Army after 9/11 and was killed by his fellow soldiers while fighting in Afghanistan in 2004, but the Pentagon pretended he died in a battle with Taliban fighters. His brother Kevin was in the same unit, as was U.S. Army Spc. O'Neal. O'Neal testified Tuesday that their battalion commander, then-Lt. Col. Jeff Bailey, told him not to tell the Tillman family how Pat Tillman died.

"I was ordered not to tell them," O'Neal told Congress, according to the Associated Press. Bailey "basically just said, 'Do not let Kevin know, he's probably in a bad place knowing that his brother's dead,'" O'Neal said, adding that Bailey told him he'd "get in trouble" if he told.

That's courage, something this administration doesn't seem to recognize. Earlier at the hearing Kevin Tillman accused the military of "intentional falsehoods," "deliberate and careful misrepresentations" and "fraud" for lying to the family and the country out of the need to create a more heroic, mythic version of the football hero's death. And Jessica Lynch, the Army private whose capture by Iraqis in the early days of the war was likewise distorted by military officials for myth-making purposes -- she was depicted fighting off Iraqis with guns blazing, when she was actually captured after being injured in a convoy crash -- blasted the Pentagon's comic-book lies about her and Tillman with quiet dignity. "The bottom line is the American people are capable of determining their own ideals of heroes and they don't need to be told elaborate tales," Lynch said.

Meanwhile, with 10 more soldiers dead in Iraq, the administration sent out hit man Dick Cheney to rough up Senate Majority Leader Harry Reid over the withdrawal timelines Reid and congressional Democrats vow to keep attaching to Iraq spending bills. Cheney blasted Reid for "defeatism," said he'd flip-flopped on Iraq funding, and suggested he'd changed his mind as a "political calculation." I'm not someone who thinks Reid's leadership is beyond reproach -- he did flip-flop on the surge, indicating support when Bush initially proposed it but quickly changing his mind -- but I enjoyed Reid's retort to the man he called the "president's attack dog:" "I'm not going to get into a name-calling match with somebody who has a 9 percent approval rating."

Finally, Karl Rove continues to get bashed for his political cowardice and bad manners at the White House Correspondents Association dinner, when he rebuffed Sheryl Crow and Laurie David's efforts to talk global warming, shaking off Crow's hand on his arm with a gruff, "Don't touch me!" I debated former Bush 2004 campaign spokesman Terry Holt about it on MSNBC's "Scarborough Country" last night, and got a glimpse of that inbred Beltway culture Glenn Greenwald's been depicting so ably lately. When I suggested Rove was a hypocrite, embracing these incestuous media-administration get-togethers when they suit his purposes -- like when he was cheered for his ludicrous "MC Rove" rap performance at last month's Radio and Television Correspondents' Association Dinner -- and then blanching at a less-worshipful reception, Holt actually cut in to say: "You just sound like you're upset you didn't get invited." As if silly D.C. dinners are tough invites -- and as if I'd give up my Saturday night in San Francisco to attend that one, especially after the way they treated Stephen Colbert last year!

Just another snapshot of the self-importance of tired Beltway political and media elites, who mistake disdain for envy and think their glad-handing is glamorous. It made me almost miss sparring with Pat Buchanan -- and truly miss David Halberstam.