A new low for Giuliani

The braying ex-mayor claims a Democrat in the White House will mean more terror attacks, but he's just trying to hide from his own 9/11 mistakes. 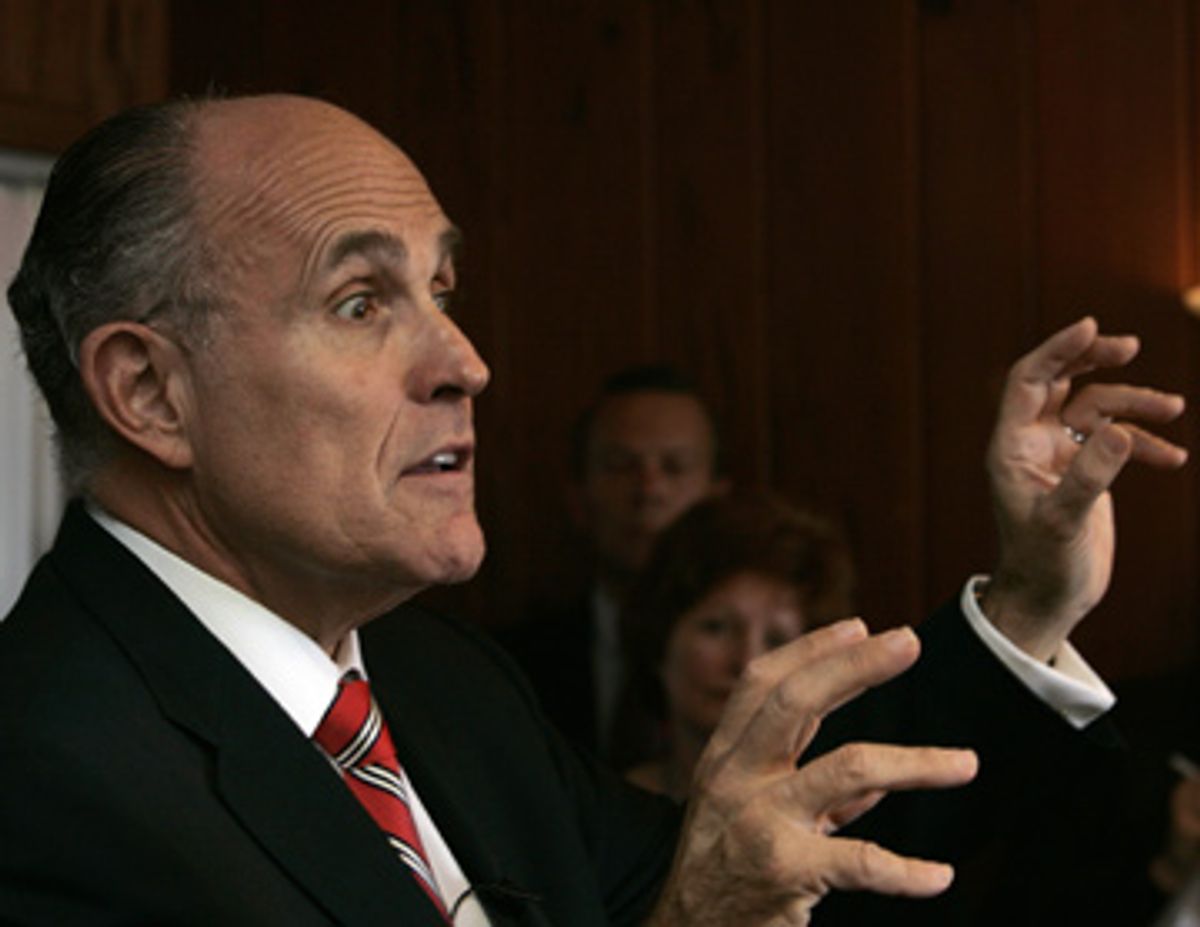 When Rudolph Giuliani delivered his stark warning Tuesday of another 9/11 should the Republicans lose the White House in 2008, Democratic presidential candidates responded with a predictable chorus of outrage. Even the amiable Barack Obama protested that he had sunk to a "new low in the politics of fear."

But in truth, Democrats ought to be happy whenever the Republican front-runner opens his mouth. For every time the former New York mayor speaks, and especially when he reaches for demagogy, he confirms again that electing him would mean prolonging the disaster of the Bush administration, or precisely the opposite of what most Americans say they want now.

Ever since his prime-time speech during the Republican Convention of 2004, if not earlier, Giuliani has been locked into the "wartime presidency" script written by Karl Rove to win the midterm elections and reelect George W. Bush. That divisive script purposely ignored the patriotic solidarity that had unified the nation in the aftermath of 9/11. Rove insisted that only Republicans could be trusted to protect America in the "long war" against the terrorists, implying that for the duration of the war only Republicans should exercise power. The logic of Giuliani's speech was impeccably Rovian.

"I listen a little to the Democrats and if one of them gets elected, we are going on defense," he told the rapt fat cats at the Lincoln Day dinner Tuesday in Rockingham, N.H. "We will wave the white flag on Iraq. We will cut back on the Patriot Act, electronic surveillance, interrogation, and we will be back to our pre-Sept. 11 attitude of defense.

"If any Republican is elected president -- and I think obviously I would be the best at this -- we will remain on offense and will anticipate what [the terrorists] will do and try to stop them before they do it," he said.

Yet despite Giuliani's customary swaggering and braying and the bellowing cheers he elicited from the audience, that speech marks a rhetorical dead end for him and his party. He should be challenged to explain and expand his remarks. Does he truly favor an open-ended commitment of American troops in Iraq? Does he support unlimited surveillance of Americans by their government? Would he countenance torture as a form of interrogation? Even his fellow war enthusiast John McCain drew the line there. The Iraq escalation isn't working, the war remains deeply unpopular, and the majority of the public long ago stopped believing the lies used to justify Bush administration policy. Blustering about white flags will stir up Republican primary voters, but those partisan insults also slur the majority of Americans who want to withdraw U.S. forces from Iraq.

Giuliani's endorsement of the strategic disasters in Iraq and Guantánamo raises serious questions about his judgment. His broader assertions about the war on terrorism, such as the infallibility of his leadership and the overall supremacy of Republicans, simply won't withstand scrutiny. Having entwined himself so inextricably with Bush, he will have to answer for the president's failures as well as his own, both before and after 9/11 -- the tragedy that provides the only conceivable rationale for his candidacy.

It is not true, as Giuliani claimed in New Hampshire, that nobody understood the threat posed by al-Qaida before September 2001. The Clinton administration mobilized against the millennium plot in the months before December 1999, thwarted more than one al-Qaida conspiracy and spent billions of dollars on counterterrorist planning and programs. When Bill Clinton departed, he and his staff tried to warn President Bush and the incoming national security team to take the jihadists seriously, and were contemptuously ignored.

The new Republican administration disregarded many warnings, in fact, and neglected the threat until it was too late. That is a matter of public record.

As for Giuliani himself, there is no evidence that he had any special understanding of terror, even after the first bombing of the World Trade Center occurred during the same year he won New York's mayoral election. There is considerable evidence, however, that his subsequent decisions as mayor made the terrible situation on 9/11 even worse. Sooner or later, both Giuliani and his supporters will have to face that evidence, compiled by reporters Wayne Barrett and Dan Collins in "Grand Illusion: The Untold Story of Rudy Giuliani and 9/11," their recent book that dismantled the mythology of "America's Mayor."

In vivid detail, Barrett and Collins examine how Giuliani brushed aside the advice of real experts and stubbornly built the city's new emergency command center in a World Trade Center building, although terrorists had struck there already and were believed likely to strike again. When that multimillion-dollar boondoggle fell with the rest of ground zero, the mayor and his aides were left to run the fire and police response from the streets, with mixed success at best. The location of the command center was only one of several ultimately lethal errors that originated in Giuliani's City Hall.

More recently he made another horrific mistake by promoting the appointment of Bernard Kerik as secretary of homeland security. Fortunately, that nomination was promptly killed after New York newspapers began to investigate Kerik's background. It was bad enough that Giuliani had elevated the thuggish police bodyguard, first to corrections commissioner and then to police commissioner, over far more qualified candidates strictly because he was a sycophantic loyalist. He was dead wrong about Kerik -- whose bad character and poor judgment included accepting favors from a Mob-connected contractor -- and almost placed the man in one of the government's most sensitive and important positions.

Of course, the Kerik nomination exemplifies the Bush model of crony government. (If only he had been around the White House for a few weeks longer, the crooked cop might even have earned a nickname, like Brownie or Fredo or Turd Blossom.) Giuliani's fervent recommendation of Kerik demonstrated that, like Bush, he values cronyism far more than merit and the public interest.

No doubt the former mayor believes that he is "obviously" the best choice for president. And no doubt he is -- but only for the diminishing minority of voters who still want more of the same.