When good actors do bad things

Alec Baldwin confesses his sins to Rosie and Barbara. Can't we forgive him, after all he's done for us? 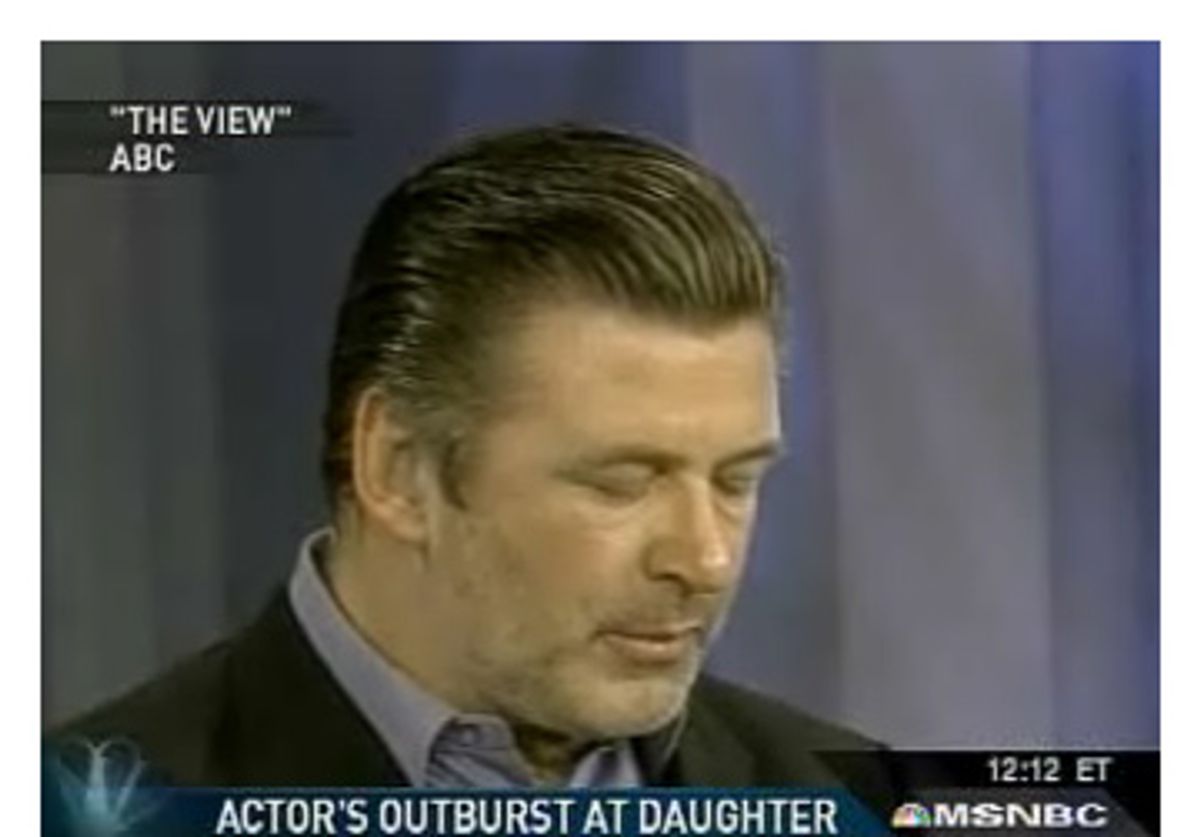 We all claim to be sick of celebrity culture, and yet few of us can manage to unglue ourselves from tabloid gossip pages and Web sites. Alec Baldwin leaves a harsh and inappropriate message on his daughter's voice mail, and almost instantaneously the whole world knows about it. Next thing you know, the embattled celebrity is wedged uncomfortably, like a shamed monkey, between Barbara Walters and Rosie O'Donnell on "The View." Their relationship to him, in this relatively brief moment of television, is unclear: Are they grand inquisitors, soothing mommy types, or sympathetic fellow celebrities? Without ever mentioning ex-wife Kim Basinger's name, Baldwin makes it clear that, in his view, she's an unreasonable cow who'll do everything in her power to prevent him from seeing his daughter. Walters, always the brilliant voice of reason, notes that there are two sides to every story. At home, we all nod in agreement: mmm, yes, two sides to every story. And we huddle in to hear Baldwin's mea culpa, what he learned from this sorry event, what he plans to do next.

Somewhere in there, Baldwin drops a mini-bomb: He has asked NBC to release him from his "30 Rock" contract, since he wants to spend the next few years concentrating on a subject that, for obvious reasons, has become very important to him, that of parental alienation as a component, or a result, of divorce litigation. (He has a book on the subject, from St. Martin's Press, coming out within the next few months.) "If I never acted again, I couldn't care less," Baldwin said on "The View." He's been in the game for a long time, and you need only scan his IMDb listing to recognize that the guy has been working, a lot, for about a quarter of a century. Who could blame this clearly intelligent and articulate guy for wanting to leave a profession he's good at, when more people have an opinion about a voice mail message he left for his daughter than they do about his actual work?

Celebrity culture has always been with us, and it will never go away: In the old days, movie fans would snap up magazines like Photoplay to find out if Clark Gable and Rita Hayworth were nice people in real life, as beautiful inside as they were on the movie screen. We wanted their lives to be our illusion; if at all possible, real life was not allowed to intrude.

Now real life intrudes all the time. Can a guy who talks to his daughter the way Baldwin did be a good person in real life? We all have our own ideas about that, whether we voice them or not. And if Baldwin decides he doesn't want to act anymore, who can blame him? He's tired of it, he wants to do other things, he doesnb

But while I'm sorry that Baldwin said those hotheaded things to his daughter (and I'm sorry that his daughter will probably suffer more from the fallout than any other player here), I'm much sorrier to hear that he doesn't want to act anymore. Sure, maybe I'd feel "better" about Baldwin if I could believe that he's a perfect dad. But if I'm suffering through a crap movie -- like "Running With Scissors," or "Along Came Polly," or "Ghosts of Mississippi," to name three of many -- and Alec Baldwin shows up, I don't really care what kind of a dad he is. I'm just glad to see him. He's doing his job, and I, as a moviegoer (or, in the case of "30 Rock," TV viewer), am doing mine.

Recently, I was talking with a friend about what a terrific, and underappreciated, actor Bruce Willis is, about how he makes good movies even better and is able to elevate, at least temporarily, the truly horrible, stupid ones. She suggested that maybe his on-screen sensitivity and believability is his way of making up for being such an asshole in real life.

I'm sure I'd heard or read somewhere that Willis is kind of an asshole. (I know for sure that I disagree with his politics.) But so what? If an actor I liked were convicted of an ax murder, I'm sure I'd find it hard to look at his or her face. But a pissed-off message left on a preteen's cellphone? I find it hard to care much, and as articulate and intelligent as Baldwin obviously is, I would rather not have to watch him on "The View," apologizing, justifying and explaining.

When I go to the movies, I get exactly what I want from Alec Baldwin, as I do from Bruce Willis. I don't need their apologies, justifications or explanations. I don't have to be married to them. I don't have to follow their rules about keeping my room clean or answering my cellphone or doing my homework. I'm selfish about my actors: I just want them to continue to do their jobs, because when they do their jobs well, it makes my job, as part of their audience, so much more pleasurable. I don't know how much money Baldwin tends to make per picture, but as far as I'm concerned, he's working cheap. If he wants to leave the profession, even temporarily, that's his business. But it would make my business poorer.