The feds are still looking for the E. coli

As the bacterial outbreaks in Pennsylvania and California show, the USDA's food-safety division has trouble tracking down the slaughterhouses that produce tainted meat. 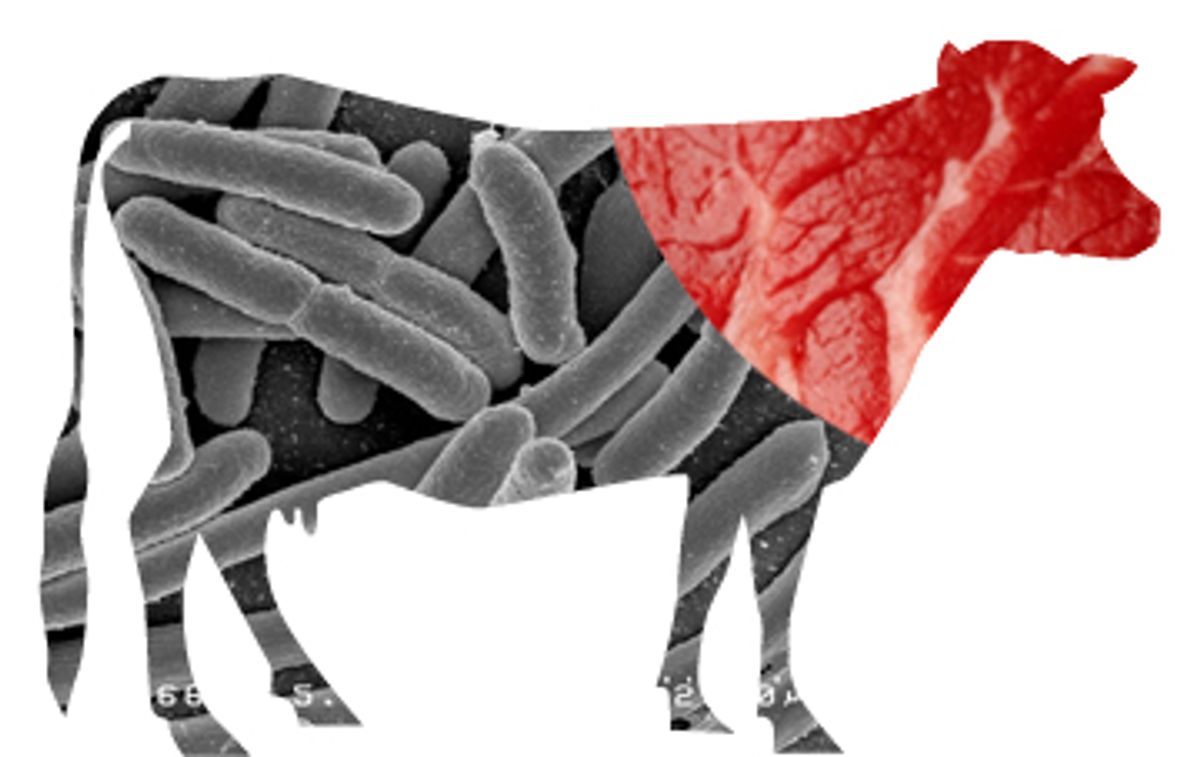 It all started with Little League baseball players in Napa County, Calif., in early April. Three of them, as young as age 9, ate hamburgers they purchased from snack vendors at the game. They each fell ill, complaining of cramps and diarrhea, classic symptoms of a potentially deadly bacterium known as E. coli O157:H7. Just a few days earlier, five people in four Pennsylvania counties became sick with similar symptoms in an apparently unrelated E. coli case. They had each recently ordered rare and medium-rare steaks at a local restaurant chain, Hoss's Steak and Sea House.

The two separate E. coli outbreaks subsequently demonstrated both the strengths and ongoing weaknesses of the troubled federal food safety system, which has been under recent scrutiny because rising rates of E. coli sickness. Within weeks, nationwide recalls were announced for nearly 400,000 pounds of meat, and two local meat-processing facilities were temporarily shuttered. But federal food safety inspectors have not yet been able to track down the original slaughterhouses that probably caused the outbreak, leaving open the possibility that more contaminated food is still in the food system. Meanwhile, smaller meat-processing firms that are probably blameless bear the financial brunt of the recalls.

In both cases, state health officials sprang into action shortly after local doctors reported the illnesses. They took DNA samples from the sickened diners and conducted interviews to identify the source of the illnesses. "It's pretty straightforward epidemiology work," explained Richard McGarvey, a spokesman for Pennsylvania's health department. Within a couple of weeks, the California and Pennsylvania agencies had traced the bacteria to meat that passed through two beef-processing facilities, HFX in South Claysburg, Penn., and Richwood Meat Co. in Merced, Calif.

Then the feds took over. The Food Safety and Inspection Service, a division of the U.S. Department of Agriculture, arranged for voluntary recalls of hundreds of thousands of pounds of meat, which had been distributed by HFX and Richwood to five states. Official press releases were issued naming the facilities and warning consumers to discard the suspect meat. For the public, this is where the story ended. The recall faded from the headlines. The sick recovered. No new illnesses were reported.

But the biggest question remained. Who was responsible for contaminating the recalled beef with deadly bacteria? Meat industry experts agree that HFX and Richwood were almost certainly not the source of the contamination. Unlike many other food-borne illnesses, E. coli outbreaks arise from a very specific source: animal feces, which typically comes into contact with raw meat during the initial slaughtering process, not during the processing of beef into hamburger or steak. The two processing facilities named in the recalls do not slaughter, but instead buy USDA-approved packaged beef directly from other companies. "We don't have any cow shit in this plant, unless it comes in on the boxed beef that we buy," explained Tom Smith, the director of quality assurance at HFX.

The real culprits, therefore, are meatpacking companies who have yet to be identified, suggesting that meat contaminated with E. coli may still be in circulation. Nearly a month after the initial sicknesses and more than a week after the meat recalls, a spokesman for FSIS said the agency was still sorting through the list of suppliers that each processing facility used. "It takes some time to get to each of these places and look at the records," said Steven Cohen, an FSIS spokesman. "We are in the process of doing sampling that is called for to tell us if any of the suppliers is more likely than the others."

For critics of the meat-inspection system, the delay represents a major flaw in the federal food safety program, which has been rocked in recent months by a pet food scare and a major E. coli outbreak traced to spinach. In January, the Government Accountability Office declared the federal oversight of food safety to be a "high risk area" for the first time, noting that food testing and recall procedures were often flawed and inconsistent.

"The USDA cannot focus all of the enforcement actions on these innocent, downline non-slaughter plants," says John Munsell, a former meat processor from Montana, who runs an advocacy group called the Foundation for Accountability in Regulatory Enforcement. He hopes the April recalls put more pressure on inspectors to require better supplier records when meat is ground and tested, a change that could allow for more immediate trace-backs. "Justice and equity demand that the noncompliant source plant which introduced the pathogenic bacteria must resolve the problem," Munsell wrote in a recent e-mail to Salon, "not the downstream plant which is the unwitting destination of contamination."

The current problems can be traced to USDA regulations first put into place in 1994. Under those rules, small meat processors who mechanically tenderize or grind USDA-approved beef from outside slaughterhouses became legally responsible for any "adulterants" like E. coli in the final product. "Whoever grinds it gets stuck with the problem," explains Bill Marler, a Seattle trial lawyer who specializes in food poisoning cases. "If the product has E. coli on it, they are on the hook. It is an unfair situation."

The rules have resulted in inspectors who have historically shown little interest in finding the source of the contamination, with sometimes disastrous results. In 2002, E. coli-contaminated beef from a ConAgra slaughterhouse in Greeley, Colo., sickened 46 people in 16 states and killed a woman in Ohio. But months before most of the illnesses became apparent, two small meat processors, including a plant run by Munsell, received positive tests for E. coli from boxed beef that had been sent from the Greeley plant. Federal meat inspectors blamed the processing plants and initially refused to trace the contamination back to its source. "Existing policy stated that the grinders should be held accountable for ensuring the product that they purchased was wholesome," explained the USDA's inspector general in a damning report about the incident. "FSIS was slow to react."

In the end, the ConAgra plant recalled at least 18 million pounds of beef for suspected E. coli contamination, though only 3 million pounds were recovered. The inspector general's report estimated that had federal regulators acted only a week faster, they could have prevented nearly 3.75 million pounds of suspect meat from entering circulation.

Since then, the FSIS has revised its rules, with uncertain results, since most of the trace-backs do not result in public announcements. Under the new rules, processing plants must turn over their supplier records in the event of a recall, and that information is entered into a database to track patterns. Inspectors return to the supplying plants to check records for past positive test results. Inspectors also have the option of requiring more tests from the supplying slaughterhouses. "I just don't know whether any of it makes a difference," says Felicia Nestor, a food safety expert at the advocacy group Food & Water Watch. "They say sometimes that they are going back to trace suppliers, but I would have to see it to believe it."

In the meantime, the Centers for Disease Control and Prevention report that the rate of E. coli illness in the United States is again rising, after substantial declines in 2003 and 2004 that were credited to improved slaughtering and testing procedures in meatpacking plants. The reasons for the increase are, according to the CDC, "not known," but they may be tied to the contamination of other types of food, like spinach or lettuce. Cohen, the FSIS spokesman, said that recent federal beef testing reveals lower rates of E. coli contamination than testing before the ConAgra recall.

For meat processors, however, the impact of an E. coli recall can be devastating. Munsell says the financial stress of the 2002 ConAgra recall forced him to sell his family-run plant. At HFX, for most of the past two weeks, plant officials have been working with federal inspectors to reopen their plant. They have decided to eliminate some of the meat-injection processes, which can push E. coli contamination into the center of a steak from the surface, even though plant officials admit that they have very little control over the meat that they buy from slaughterhouses. HFX officials provided a list of their suppliers to the inspectors but have not heard about any further enforcement actions. "From the questions that they asked, the top priority, to my knowledge, was not to try to isolate where the meat came from," said Smith, the quality assurance director at HFX.

For Smith, the real lesson of the HFX recall is that consumers should not trust their meat to be safe unless it is fully cooked, a process which kills the E. coli bacteria. "It comes down to personal responsibility when you eat," said Smith, who recommended against ordering rare or medium-rare beef. "The only way to make this safe is to cook it."

Barring further improvements at FSIS, that lesson may apply nationwide. Since the suppliers of the E. coli-contaminated beef have yet to be found, the recalls from last month are potentially incomplete. There is, as yet, just no way of knowing how much more contaminated meat remains in the food chain.