I hate to sink the GOP's toy boat, but it was the French who inspired the U.S. Constitution, a document written by geniuses so it could be followed by idiots. 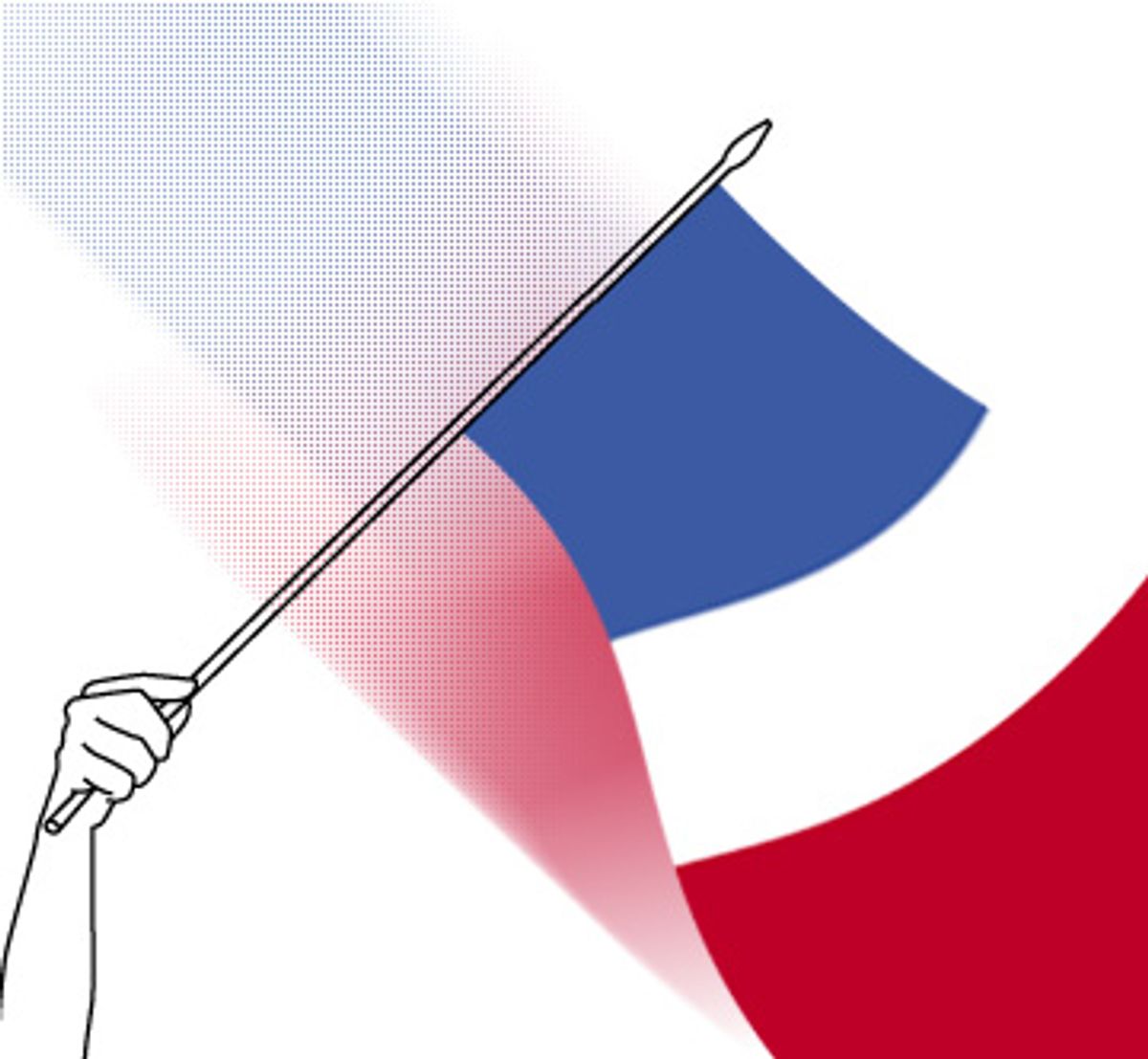 New Rule: Conservatives have to stop rolling their eyes every time they hear the word France. Like just calling something French is the ultimate argument winner. "Aw, you want a healthcare system that covers everybody and costs half as much? You mean like they have in France? What's there to say about a country that was too stupid to get on board with our wonderfully conceived and brilliantly executed war in Iraq?"

Earlier this year, the Boston Globe got hold of an internal campaign document from GOP contender Mitt Romney, and a recurring strategy was to tie Democrats to the hated French. It said, in the Machiavellian code of the election huckster, "Hillary equals France," and it envisioned bumper stickers that read, "First, not France."

Except for one thing: We're not first. America isn't ranked anywhere near first in anything except military might and snotty billionaires. The country that is ranked No. 1 in healthcare, for example, is France. The World Health Organization ranks America at 37 in the world -- not two, or five -- 37, in between Costa Rica and Slovenia, which are both years away from discovering dentistry.

Yet an American politician could not survive if he or she uttered the simple, true statement, "France has a better healthcare system than us, and we should steal it." Because here, simply dismissing an idea as French passes for an argument. John Kerry? Can't vote for him -- he looks French. Yeah, as opposed to the other guy, who just looked stupid.

I know, if God had wanted us to learn from the Enlightenment, he wouldn't have given us Sean Hannity.

And I'm not saying France is better than America. Because I assume you've already figured that out by now. I don't want to be French, I just want to take what's best from the French. Stealing, for your own self-interest -- Republicans should love this idea. Taking what's best from the French: You know who else did that? The Founding Fathers. Hate to sink your toy boat, Fox News, but the Founding Fathers, the ones you say you revere, were children of the French Enlightenment, and fans of it, and they turned it into a musical called the Constitution of the United States. And they did a helluva job, so good it has been said that it was written by geniuses so it could be run by idiots. But the current administration is putting that to the test. The Founding Fathers were erudite, well-read, European-thinking aristocrats -- they would have had nothing in common with, and no use for, an ill-read xenophobic bumpkin like George W. Bush.

The American ideas of individuality, religious tolerance and freedom of speech came directly out of the French Enlightenment -- but, shhh, don't tell Alabama. Voltaire wrote "men are born equal" before Jefferson was wise enough to steal it.

Countries are like people -- they tend to get smarter as they get older. Noted military genius Donald Rumsfeld famously dismissed France as part of Old Europe, but the French are ... what's the word I'm looking for? Oh yeah, "mature." We think they're rude and snobby, but maybe that's because they're talking to us.

For example, France just had an election, and people over there approach an election differently. They vote. Eighty-five percent turned out. The only thing 85 percent of Americans ever voted on was Sanjaya.

Maybe the high turnout has something to do with the fact that the French candidates are never asked where they stand on evolution, prayer in school, abortion, stem cell research or gay marriage. And if the candidate knows about a character in a book other than Jesus, it's not a drawback. There is no Pierre Six-pack who can be fooled by childish wedge issues. And the electorate doesn't vote for the guy they want to have a croissant with. Nor do they care about the candidate's private lives: In the current race, Ségolène Royal has four kids but never bothered to get married. And she's a socialist. In America, if a Democrat even thinks you're calling him a liberal he immediately grabs an orange vest and a rifle and heads into the woods to kill something.

The conservative candidate is married, but he and his wife live apart and lead separate lives. They aren't asked about it in the media, and the people are OK with it, for the same reason the people are OK with nude beaches: because they're not a nation of 6-year-olds who scream and giggle if they see pee-pee parts. They have weird ideas about privacy. They think it should be private. In France, everyone has a mistress. Even mistresses have mistresses. To not have a lady on the side says to the voters, "I'm no good at multitasking."

France has its faults -- the country has high unemployment, a nasty immigrant problem and all that ridiculous accordion music. But its healthcare is the best, it's not dependent on Mideast oil, it has the lowest poverty rate and the lowest income-inequality rate among industrialized nations, and it's the greenest, with the lowest carbon dumping and the lowest electricity bill.

France has 20,000 miles of railroads that work. We have the trolley at the mall that takes you from Pottery Barn to the Gap. It has bullet trains. We have bullets. France has public intellectuals. We have Dr. Phil. And France invented sex during the day, the ménage &agrave trois, lingerie and the tongue.

And the French are not fat. Can't we just admit we could learn something from them?