It all ends with capsized boats, teary fights and an appropriate nod to "The Newlywed Game." 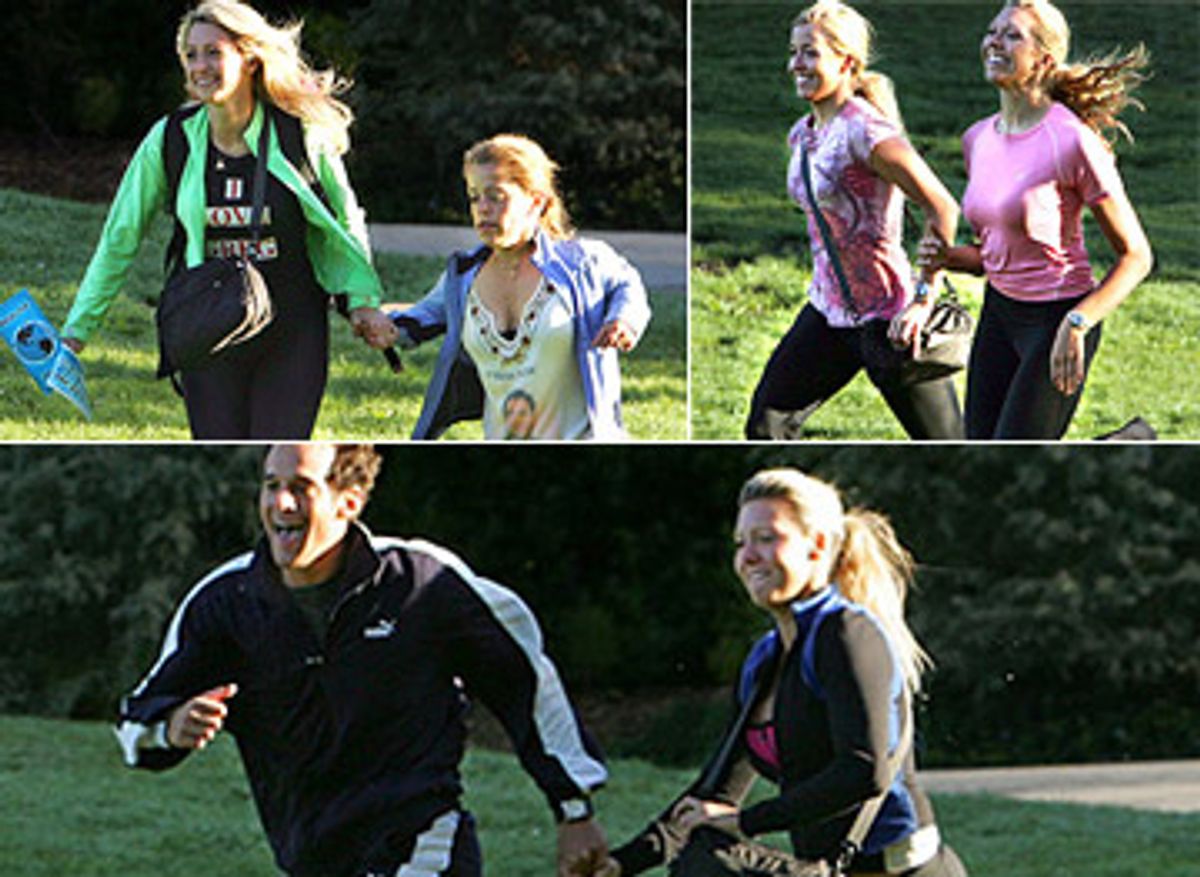 When I was a kid, my parents had a perverse attachment to taking long vacations in the car, despite the fact that we'd inevitably descend into a claustrophobic nightmare of shoving, whining and tears, punctuated by bellowed threats from the front seat. I always thought we were the only ones who fell apart without fail on vacation, but over the years friends have shared similar horror stories about skittering down highways of solid ice in Texas, engaging in father-son fisticuffs in a parking lot in Florida or bickering on a train through the French countryside.

Traveling tests the heartiest of bonds, let alone the fragile ties that bind your average vaguely dysfunctional relationship together. The lack of familiar cues paired with the stressors of navigating the unknown can unearth old resentments until the vast, anonymous landscape seems to cry out to you like a siren, singing of the joys of life unburdened by pesky humans with terrible map-reading skills and perpetual corn-chip breath.

While most people refuse to believe that a reality show could have any subtext, "The Amazing Race" has always lingered on the tenuous bonds that hold people together, and this 11th season was no exception. After several weeks of dashing around the globe, sleeping in parking lots, scaling the outsides of skyscrapers, asking indifferent, uncomprehending strangers for directions and trying to find the fastest flights to another continent, even the most steadfast teams find themselves questioning their compatibility. And when the questioning begins, that's when teams start to lose.

Just ask Eric and Danielle of this season's "The Amazing Race: All-Stars," which invited back some of the favorite teams from the show's first 10 seasons. Throughout the race, the dating pair, who met during the show's ninth season, have struggled to get along. While laid-back Eric got quiet and aloof and tried to shrug it off when things went wrong, high-strung Danielle got angry and depressed and talked about how she wanted to quit.

Of course, things went wrong for Eric and Danielle constantly: They missed a few crucial flights, they were yielded twice, and they even came in last once, which meant they were marked for elimination and had to make sure to beat the last team in the next leg of the race by at least 30 minutes. At times it looked like the young couple could barely stand to speak to each other. Eric cringed at the dumb things Danielle said, Danielle rolled her eyes at Eric's insulting remarks and his inability to tolerate her bad moods. The pair seemed to have nothing in common and no reasonable ways of communicating, and on "The Amazing Race" that usually spells disaster. Eric summed up his troubles with Danielle last week in typically vague terms: "It's been a long road."

Meanwhile, cousins Charla and Mirna were at once the easiest team to root for and the easiest to despise. Charla is 4 feet tall and struggled with every physical challenge, but she rarely let her size get her down. (In her first season she polished off a massive scrambled ostrich egg; this time she had to eat 2 feet of Polish sausage.) Mirna, on the other hand, is a troublemaker who regularly baited the other teams into fights, and seemed to spend most of her time yelling at Charla to hurry up, despite the fact that Charla was always running as fast as her little legs would carry her.

Last week featured this telling exchange between the cousins, in response to Eric and Danielle's asking if they thought beauty queens Dustin and Kandice might be researching flights somewhere:

Mirna: Charla said they don't know how to use the Internet! (Laughs)

Charla: No, I didn't say that. I said I haven't seen them using the Internet.

At least the cousins kept things entertaining, between Charla's aimless chattering to strangers and Mirna's exaggerated Armenian accent, which for some reason she trotted out whenever she was afraid that a cabdriver wouldn't understand her. "We have to try to do the right accent," she said last week. "It makes all the difference in the world." (It didn't seem to help at all, actually, and strangely enough, according to the CBS Web site, the two speak several languages -- Armenian, Turkish, French and Spanish.)

Then there were the beauty queens, Dustin and Kandice -- or the "dirty pirate hookers" as Eric memorably called them in the eighth episode, when they used the Yield to delay him and Danielle. When they weren't grinning ear to ear and telling us how excited and psyched and pumped they were and how cool and awesome every second of the race was, they were making everyone else hate them. No matter how cutthroat they were during the race, Dustin, who describes herself as "spunky" on the CBS Web site, and Kandice, who prefers the term "vivacious" to describe herself, always reserved an innocent, aw-shucks attitude for the camera.

Of course, through clever editing, we're coached to second-guess each team every step of the way. As longtime fans of the show know very well, "The Amazing Race" would be nothing without its mischievous sense of fun. This show is buoyed primarily by a playfulness that, like a cat's, sometimes borders on sadism. And along with the teasing tone, producers choose exactly the sorts of challenges that are sure to reduce any mortal into a bickering mess of nerves and spitty insults: Navigate this wobbly boat across a windy lake, take this poorly marked train filled with grabby strangers through India, sort through this enormous pile of tomatoes while strangers hurl tomatoes at your head.

That said, this season's challenges were some of the most frustrating and difficult ever: Catch 80 fish by hand and transfer them from one tank to another; take a white-water raft down Category 4 rapids; fill 10 huge bags with coal by hand, then lug one of them to an address in Mozambique; climb the side of a building while kung fu fighting; sail to the island of Zanzibar, then lug two 50-pound logs in a handcart over a mile to a shipyard. "It's a miserable game, this race," said Rob of infamous married team Rob and Amber, who were eliminated in the fourth episode after placing first three times in a row.

The last leg of the race proved to be particularly daunting. After flying from Guam to Hawaii, the three remaining teams had to navigate two-man canoes through strong winds and crashing waves. The challenge appeared to be one of the most difficult so far. "This is the worst experience I've ever had in my life," proclaimed Charla.

Thrillingly enough, after quarreling over the best way to make it to the buoy, Dustin and Kandice had their first fight. First Kandice dragged out a schoolmarm's tone that was notably lacking in vivaciousness: "Dustin, out there on the water, you were not a good teammate. You were just about Dustin."

This seemed to cut Dustin to the bone. Dustin, just about Dustin?! Dustin, who felt all patriotic last episode just because she learned that "you can be in the Navy and have cute nails"? Dustin is about anything but just Dustin! Dustin is pumped and excited and spunky and she's ... all about America, damn it!

"I have no patience for you right now," said Kandice, twisting the knife.

"You said that I wasn't a good teammate. That's ... that's a big thing to say, Kandice," Dustin said softly, through tears. It is? Wow. So this is how beauty queens argue.

Then Dustin really turned on the waterworks. "The fun of this race is doing it with you!" she gurgled. "I'd rather not do it if it's like this."

The beauty queens, at their finest! If only they could've broken down and fought a long time ago, the whole season would've been even better than it already was, what with Danielle calling the Team Guido "bipolar" and "totally nuts" and Eric calling them "freaks" and Mirna screaming at Charla every five seconds. In fact, the beauty queens really completed the picture with this breakdown, since the All-Star season has focused its considerable energies on juvenile shenanigans and petty squabbles.

But what could be more appropriate, in a game that tests each team's commitment to each other? And in the final stretch, in a clear homage to the show's unspoken premise, the producers took a page straight from "The Newlywed Game" playbook, asking one member of each team to answer four questions about the other teams ("Who is the least trustworthy?" "Who has the best sense of humor?" etc.). While Dustin and Kandice, and Charla and Mirna, couldn't figure out each other's answers, Danielle successfully guessed Eric's answers.

"It really is based on communication," said Eric. "And since Danielle does talk so much ..." Aw, maybe he was listening all that time, huh Danielle?

Even so, as they stood at the finish line, you could see it all over their faces: "Give me my half a million dollars so I can kiss this loser goodbye!" Which would have been a sad ending, if we weren't caught up in the gleeful sadistic joy of it all, having already laughed at Charla falling over in her tiny suit of shiny knight's armor, Dustin vomiting up Polish sausage (after which Eric yelled, "Ladies and gentlemen, Miss California!"), and Danny and Oswald asking for "forgiveness from the universe" right before they were eliminated. Instead, we had to marvel that Eric and Danielle could make it across the finish line first, even though they were barely able to communicate, even though they already knew that their days as a couple were numbered.

Or did they? Our minds go back to the shoving, the whining, the fisticuffs, the perpetual corn-chip breath. On second thought, maybe Eric and Danielle are at the start of a beautiful adventure together ...