"Silver Palate," you seasoned my youth

"The Silver Palate Cookbook," now celebrating 25 years, changed the way my family ate -- and fueled my teenage dreams about an adulthood full of bounty. 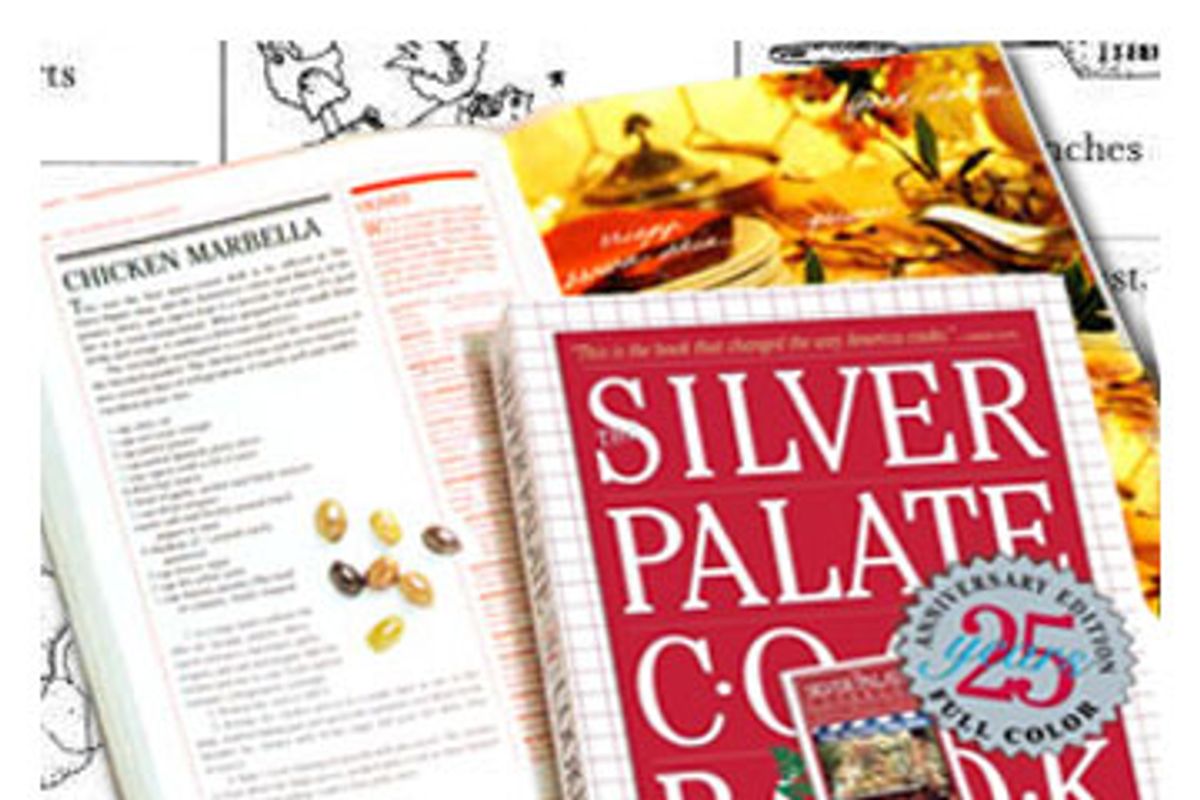 Some of us have great stories. Pretty stories, that take place at lakes, with boats and friends, and noodle salad ... a lot of people, that's their story. Good times, noodle salad. -- Jack Nicholson, "As Good as It Gets"

I remember that the first time I heard Jack Nicholson speak that line in "As Good as It Gets," I instantly knew what kind of people he was describing. He was talking about people who cooked from "The Silver Palate Cookbook."

My family was among their number. And we did have good times -- though lighter on the lakes and boats than the revelers in Jack's imagination. We also literally had "Good Times": second in the trilogy of cookbooks, along with "The Silver Palate" and "The New Basics" by Julee Rosso and Sheila Lukins.

Rosso and Lukins opened a gourmet take-away shop, the Silver Palate, on New York's Upper West Side in 1977 and published their cookbook by the same name in 1982. They are now celebrating the 25th anniversary of its publication with a spiffy new edition, newly studded with shiny still-life photographs of their multicolored, veggie-heavy terrines, purees, pastas and roasts.

Just as Alice Waters' bringing sun-warmed greens in from her garden and plating them for Chez Panisse diners sent reverberations through the professional culinary world that we still feel every time we eat a baby lettuce, so Rosso and Lukins' cozily illustrated recipes for pasta sauce Raphael and chocolate hazelnut cake ("the best chocolate cake in the universe") changed the life of the American home cook.

In my house, it helped change the way we ate, and it just may have played a part in saving my family from early cardiac catastrophe. My mother was always a great cook, and on the weekends would make meals from Julia Child and Marcella Hazan; she made curries and stroganoffs, and dove into her own mother's potato farm repertoire for roasts and casseroles. But on work nights, it was breaded chicken or lamb chops. Having grown up on a farm, she understood a fresh vegetable, but working them into a quick meal was not always possible. Carrot sticks, a baked potato, mandarin oranges from a can: These sometimes had to suffice.

"It encouraged me to make different kinds of food," my mom says now. "Before that, my idea of how to get home at 5 and put a meal on the table was to broil a steak or a burger and boil a vegetable. On a weekend I could spend three hours making something, and that was the only time we'd ever eat anything interesting until we got 'The Silver Palate.' It allowed me to do creative things with vegetables and use less meat in a realistic amount of time."

She went on, "And it's where you really learned to cook. Because it was simple enough for a beginning cook. You certainly didn't learn out of Julia Child or any of the books I was using for really good food before 'The Silver Palate' came along."

I did learn to cook from "The Silver Palate." I became obsessed with cooking as a preteen, and thumbing through the cookbook now brings back the first ways in which I ever considered ingredients and spices and textures and flavors. It also reminds me of how my ideas about cooking -- an adult pursuit -- corresponded to my ideas about what adult life might be like.

"The Silver Palate" wasn't just about the ingredients. It was about a kind of life, a life that was comfortable and full of bounty. Rosso and Lukins didn't just print recipes, they composed menus of their food, suggesting dishes for a "country weekend lunch," or a "Mediterranean supper menu." Sometimes they pointed out that a given recipe could be served warm or cold, perfect for picnics. A note about Julee's original sour cream coffee cake read, "This elegant cake is just so scrumptious served to a large brunch party, and it's perfect, too, with late-afternoon coffee and a good book." Country weekends! Picnics! Brunches! Late-afternoon coffees and good books! With "The Silver Palate" in hand, I felt confident that I was embarking on an adulthood that would contain, as Rosso and Lukins might (and did) put it, "pesto possibilities!"

I surely didn't realize that I was, of course, fantasizing about class. I understand now that this was a book of recipes that allowed harried middle-class families to wean themselves from the Shake 'N Bake pouch and eat more like wealthy people. This kind of food -- the noodle salads and cold soups and skewered shrimp -- was more urbane and elegant than what we'd been eating in suburban Philadelphia. It's not that it was simply "rich people's food"; though there was a whole chapter on caviar, there were also soda breads and potato salads. It's just that Rosso and Lukins had begun to take labor-intensive methods and high-quality ingredients consumed by fancier people than we and translate them from the original "unattainable" into the modern "practical." Not to mention tasty.

At a time when I was trying desperately to picture what my future might look like, "The Silver Palate," just like the pretty storefront on the cover filled to bursting with green plants and canned and potted and marinated delicacies, spoke of a life filled to bursting with high-quality comforts. It evoked the kind of world I imagined when I watched "When Harry Met Sally," a world in which grown-ups lived in rambling apartments with hardwood floors and floor-to-ceiling bookcases; earthy women wore chunky jewelry and cared about endive, and their friends were funny and smart and everyone went to museums and had dinner parties that involved things wrapped in bacon.

I suppose that if my family had actually had money, maybe we would have lived like that. But we didn't. Except for the bookcases. So cooking was as close as I got, my own hungry version of dress-up.

I remember once, in seventh grade, blowing an entire Saturday making phyllo triangles filled with spinach and feta. Why? We were not having a cocktail party at my house. I just wanted to try it. I thought they sounded delicious. Now we all know about how food is porn and Nigella Lawson and Giada De Laurentiis, blah blah blah. But I bet a good deal of what motivated me had to do with feeding my own developing appetites. "The Silver Palate," with its vivid descriptions and exuberance for artichokes, was a culinary Playboy. To this day I can recall the illustration for pasta sauce Raphael in which tangles of spaghetti boil up above a cooking pot as my vision of perfect abundance. Not coincidentally, it reminded me of my primal scene, pasta-wise: Big Anthony's avalanche of spaghetti in the children's book "Strega Nona."

Not all of "The "Silver Palate's" recipes were good. In one of my family's copies, possibly the one that belongs to my aunt and uncle, I distinctly remember the succinct notation next to the recipe for an "unorthodox" version of sesame noodles that called for two cups of mayonnaise: "Yuck."

And as far as all that fresh veggie-ness goes: 25 years of changing palates and medical news mean that perusing recipes once considered light is practically comical. "This delicate sauce is perfect over angel hair pasta," reads the introduction to a recipe that includes as its first two ingredients one and a half cups of heavy cream and four tablespoons of butter. Why, sure. If by "delicate" you mean "arterial sclerotic."

Or how about the fresh summer pasta sauce that calls for a cook to marinate chopped tomatoes, olive oil, salt, pepper, basil, garlic and a pound of brie for a day and then pour hot pasta over it. It was, and is, absolutely delicious. (And may I recommend its gut-busting cousin from a later book in which are combined St. Andre cheese, walnuts, parsley, prosciutto and your body weight in raw garlic. Purr.)

But other recipes have stuck. There's a chilled shrimp and cucumber soup, icily redolent of buttermilk and vermouth, that I still eat every summer at my parents' house. And my mom made the aforementioned Pasta Raphael for 80 people at my 30th birthday party. Much less often, I'll prepare the veal scallops in mustard cream sauce and be transported back to my pubescence, when I confidently believed that my achievement in having perfected this dish just might make Julia Child shake in her orthotics.

"The Silver Palate's" version of spaghetti with oil and garlic, in which the pasta is actually boiled in chicken broth (ensuring that it is the optimum transport device for sodium), has become my mellow go-to rendition, as has its Americanized carbonara, or "bacon and egg spaghetti," as it is known very late at night in my apartment. And I recognize the dental records of what I'd thought was my personally invented chicken salad recipe (yogurt, cilantro and walnuts) in theirs (mayo, tarragon and walnuts).

It's been years since I've looked through "The Silver Palate," page by page. I can't believe I never tried the lamb chops with artichokes and endive, or the braised scallions in mustard sauce, or six onion soup, or -- hello! -- duck with forty cloves of garlic!

But for all that I'm able to see future meals in its pages, I'm afraid that the "Palate's" goofy drawings and black-and-maroon typeface will always speak to me of the past, of my mother and my childhood home and the time when in our house, like in many around the country, the plates at the table were beginning to be piled with new kinds of delicacies.

Who could have predicted, back then, that in my adult life I would be able to walk into a mega-grocery store chain and browse through a wide selection of organic kale? I did not know that eating locally and seasonally would become a political and socioeconomic responsibility, in addition to a culinary delight. I didn't know that the words "heirloom" and "heritage" might ever be applied to tomatoes and turkeys.

"When we first wrote this book, in many places, it was difficult to find fresh herbs and excellent produce, meat, and seafood," write Rosso and Lukins in their introduction. "Now, with the new emphasis on seasonal, local, artisanal, and organic foods ... the culinary climate mirrors our beginnings in that tiny shop on the Upper West Side."

So much of what I read into that cookbook had to do with what I imagined my life might look like 25 years down the road. There's still no rambling apartment in which to host cocktail parties. But there is bacon and endive. Not just for me, but for so many people who've seen their culinary horizons change so rapidly.

So here's to "The Silver Palate." Good times.