"All roads lead to the White House"

As Alberto Gonzales returns to Capitol Hill to testify, the whodunit at the heart of the U.S. attorneys scandal remains. 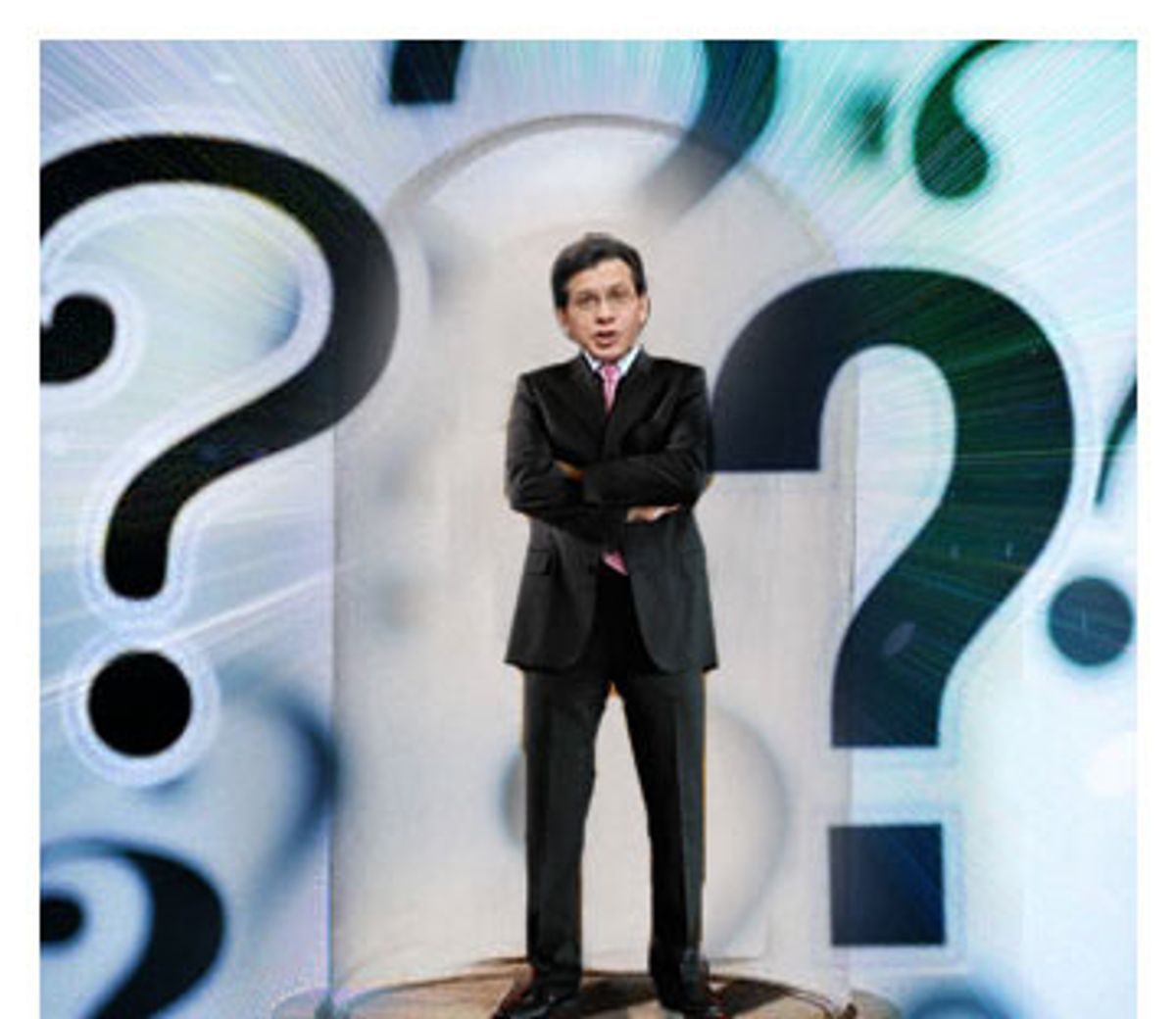 Alberto Gonzales returns to Capitol Hill on Thursday to testify before the House Judiciary Committee and to see if he can do further damage to his reputation and inspire more members of his own party to call for his resignation.

On April 19, during his attempt to account for his role in the U.S. attorneys scandal, his foggy memory produced a bipartisan chorus of criticism. Appearing under oath before the Senate Judiciary Committee, Gonzales claimed a failure to recall on 64 separate occasions. Five committee Republicans either explicitly urged Gonzales to resign -- or strongly hinted that the longtime George W. Bush advisor should actively seek employment in the private sector. But with the president serving as a one-man cheering squad, Gonzales clings to his job, even as the evidence mounts that the 2006 firings of eight U.S. attorneys were unjustified and, quite likely, based on political considerations.

Yet the story is larger than the future arc of Gonzales' governmental career. At the core of the scandal is the continuing mystery of who was responsible for the purge of the U.S. attorneys -- many of whom had prosecuted corruption cases against Republicans or had balked at pursuing legally shaky cases against Democrats.

John Conyers, who will be presiding over Thursday's hearing as the chairman of the House Judiciary Committee, underscored the importance of determining who actually orchestrated the firings. Conyers declared in a statement to Salon, "We've reviewed thousands of pages of documents and heard from the attorney general and seven Justice Department officials. But a very basic question remains unanswered: Who created the list of US attorneys to be fired and why were they chosen? And it seems -- since no one in the Justice Department claims to have made these decisions -- that all roads lead to the White House."

Gonzales himself, while trying to pin much of the blame on his former aide Kyle Sampson, says that former White House counsel Harriet Miers "inquired about replacing all 93 U.S. attorneys," a claim he will likely reiterate in his opening statement Thursday. Far more speculation has pointed to Bush advisor Karl Rove, who is known to have complained about U.S. attorneys who failed to pursue alleged voter fraud cases vigorously. In a January 2005 e-mail, Rove asked "how we planned to proceed regarding U.S. attorneys" -- whether the expected firings would be selective or en masse. There is even evidence of a meeting two months before the firings in which Gonzales discussed one of the affected U.S. attorneys with President Bush.

So far, however, beginning with Kyle Sampson, Gonzales' former chief of staff, Department of Justice officials have professed to have no direct knowledge about how the hit list of U.S. attorneys was prepared. The only key Gonzales staffer who has not yet testified or been interviewed by congressional investigators is former DOJ White House liaison Monica Goodling, to whom Gonzales delegated the hiring and firing power for some jobs. She has invoked the Fifth Amendment, and arrangements are nearly complete for her to appear before the House Judiciary Committee under a grant of immunity.

For his part, Gonzales has maintained that he passively approved the dismissals, and that the list was produced by a consensus of senior DOJ officials. It is possible, though far from likely, that Gonzales' second round of congressional testimony might spark his recollection of whether any White House official, such as Rove, directly ordered the ouster of the eight prosecutors. The attorney general did, however, drop an intriguing hint of presidential involvement during his appearance before the Senate Judiciary Committee. Asked about the firing of David Iglesias -- the U.S. attorney for New Mexico who had aroused the ire of veteran GOP Sen. Pete Domenici -- Gonzales said, "I'd heard concerns from Senator Domenici ... I heard concerns from Mr. Rove ... There was a meeting in October, with the president, in which the president, as I understand it, relayed to me similar concerns about pursuing election fraud."

Almost all 16 Republicans on the House Judiciary Committee are blessed with safe seats: Only Ohio's Steve Chabot and Ric Keller from Florida won reelection in 2006 by less than a 10 percentage point margin. As a result, any widespread GOP criticism of Gonzales during Thursday's Judiciary hearing would suggest that even the hard-core Republican base has turned against the attorney general.

What if Gonzales continues to stonewall by taking refuge in the mists of memory? Unless Goodling obligingly provides the missing link, congressional investigators are temporarily stymied. Though all roads may lead to the White House, getting through the White House gates has so far proved impossible.

The Senate Judiciary Committee has subpoenaed White House e-mails relating to the firings and Rove e-mails (which may have been destroyed) that were composed on a communications system maintained by the Republican National Committee. Even though the deadline for the subpoenas is May 15, talks with Bush counsel Fred Fielding about whether the White House will hand over these written records have been suspended since last month.

While Congress has the unquestioned authority to quiz current and former Justice Department officials, the legislative branch's power to compel timely White House testimony and cooperation may be limited. Frank Bowman, a law professor at the University of Missouri who also served in the Justice Department, pointed out that any effort to enforce a congressional subpoena in the federal courts might take years to resolve. As Bowman put it, "One does not have to be all that cynical to conclude that might be the [administration's] game plan here." This view was echoed by Bruce Fein, an associate deputy attorney general under Reagan who has been critical of the Bush administration and

In addition, House and Senate negotiations with Fielding have reached an impasse over the ground rules for congressional testimony by Karl Rove and Harriet Miers. Up to now, Fielding has insisted that Rove and Co. would testify only in private, without taking an oath and without a written transcript. Such a secret session would do little to clarify the responsibility for the unprecedented midterm purge of eight respected U.S. attorneys.

The transcript is the sticking point. Rep. Linda Sánchez, who chairs a key House Judiciary subcommittee, said in an interview, "For me, the issue is not open hearings, because we have been interviewing [Justice] Department officials behind closed doors. The fact of the matter is that you want a record of what they are saying. You want to be able to compare it to how the testimony might shift over time."

For Sánchez, a California Democrat, it all points back to the White House: "That is the next logical place to look." But given the prohibitive odds pointing to a bitter legal wrangle with Fielding over executive privilege, any answer to the question at the center of this drama may be a long time coming.