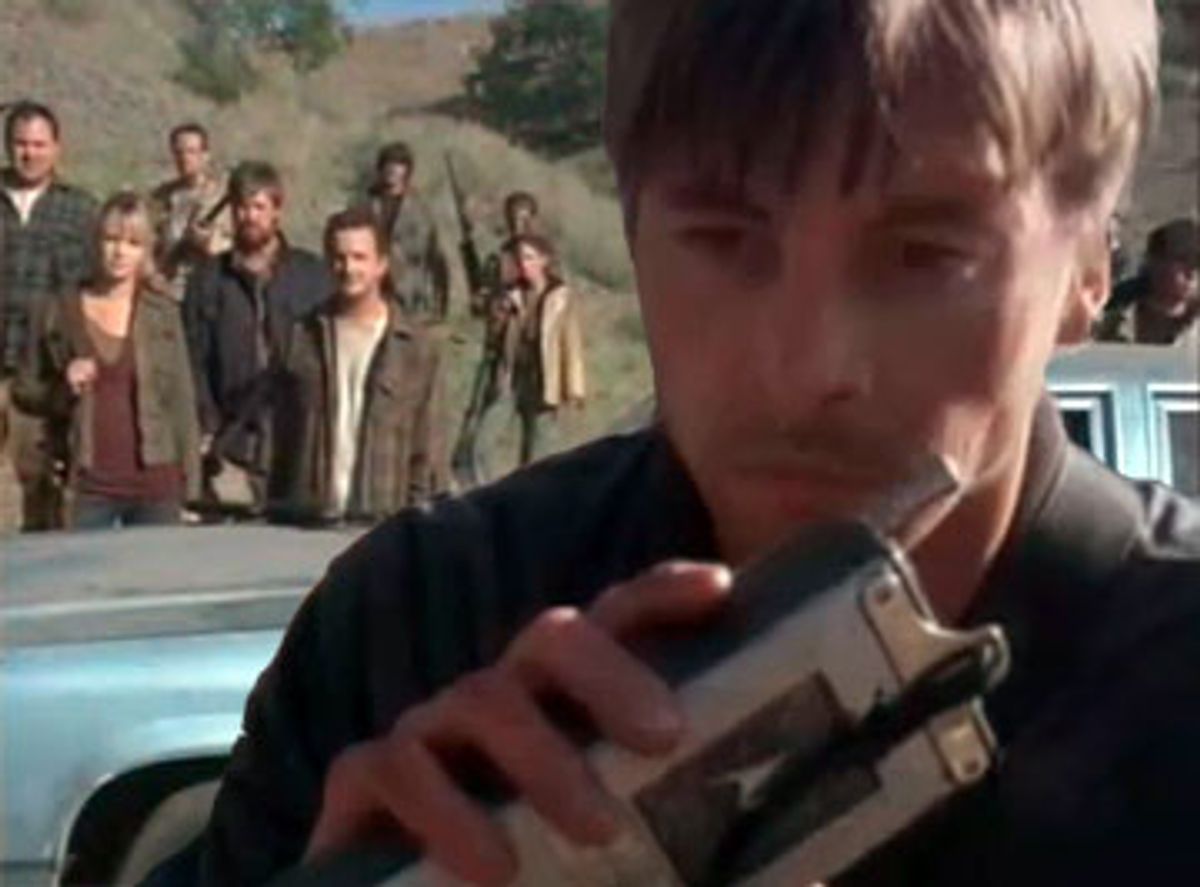 Its premise has always been the only thing "Jericho" had going for it. A series of coordinated nuclear attacks wipes out 24 American cities and leaves the citizens of the cozy town of Jericho, Kan., isolated, confused and scrambling to hold onto what's left of civilization. Beyond that, as others have pointed out, the characters are unidimensional -- the ex-bad boy whose shady past starts to come in handy, his resentful straight-arrow brother who's conducting an adulterous affair with the local barmaid, their feisty dad (who's also the town's unappreciated former mayor and rightful leader), the sinister newcomer with a nuke-proof command center in his basement, the spoiled city girl who falls for the down-to-earth farm boy, etc. -- and they come with a ready-made set of tedious personal problems and issues.

Round it all out with merely adequate acting and dialogue and at first the only reason to tune in to "Jericho" was to marvel at the complete immobility of Ashley Scott's forehead (she plays the ex-bad boy's rueful ex-girlfriend, but the glacier between her eyebrows tells us that Botox is her one true love) or to mock the producers' feeble attempts to pass off Southern California exterior shots as scenes from a Midwestern winter. Setting a small heartland town adrift in an ugly new world, free at last from all those blue-state snobs and their fancy-pants federal infrastructure, seemed like a nifty idea: Why not give Kansas a chance to find out exactly what's wrong with itself? But the mythos of the series is so invested in the dream of Frank Capra-style small-town nobility -- supposedly the only thing keeping Jericho from degenerating into Thunderdome -- that the first half of its first season often looked like "It's a Wonderful Apocalypse."

Then the network put "Jericho" on hiatus for a few months, and when the show came back in February, suddenly Thunderdome didn't seem like such stretch. Food and fuel shortages made the coming winter potentially fatal (somehow they made it through without anyone's seeing a snowflake or donning a hat), and the possibility of all those middle-class white folks starving or freezing to death in their own homes added a grim zest to the mix and made a nice change from Katrina. Some Jerichoans -- besides the hardheaded, lantern-jawed general storekeeper -- began to bargain ruthlessly for necessities with their neighbors and (former) friends. The idiot townsfolk elected tinpot tough guy Gray Anderson over Johnston Green. Then a contingent of ragged refugees staggered down Main Street, and Gray decided to throw them back out on the prairie to face nearly certain death because there weren't enough supplies to go around.

And then things got really interesting. Constantino, the leader of New Bern, the next town over, decided that Jericho was responsible for sending a band of roving paramilitaries (mercenaries from an outfit called Ravenwood -- a flagrant jab at military contractor Blackwater USA) his way. So his guys converted New Bern's factory to a munitions plant. Last week, Constantino demanded that Jericho surrender seven of its working farms to New Bern or face an invasion, and when Gray refused, they actually started shelling Jericho, turning Main Street into a miniature version of downtown Sarajevo, circa 1994. It's easy to forget that no mainland U.S. city has ever been subjected to the blind terror of mortar attacks (which tends to make Americans rather cavalier about bombings) until you experience the shock of seeing it, however cheesily rendered on-screen.

Wednesday night's season finale featured a full-scale showdown with the superior forces of New Bern and the much-awaited reappearance of the tank the Jerichoans confiscated from a band of fake Marines earlier in the season. Can any TV show ever go entirely wrong when its characters retain the option of deploying a tank? A speeding train loaded with even more New Bern troops turned up out of nowhere (just derail it for crying out loud), and before he took a bullet for the cause, former Mayor Green even got a decent line: "I'm about to go to war with New Bern, Kansas, the home of the nearest Costco." Finally, we learned that not only is Heather, the likable schoolteacher, still alive, she has tipped off the newly reconstituted U.S. Army to the pending "hostilities" in Jericho. Genuine soldiers are on their way to quash the war! Too bad they're reporting to that Rod Steiger-ish bald guy who was secretly behind the nuke attacks.

Does anyone actually care about this murky conspiracy? The real suspense in "Jericho" over the past few months has come from the tension between its sentimental, Norman Rockwell vision of small-town life and the Hobbesian wilderness howling just outside the county line. Jericho is so perfect and pure, like a Mormon prom queen, you can't help wanting to see it sullied and degraded. But who could have expected from the series' sluggish start that it would go totally off the reservation, and wind up showing us nice, average Americans threatened with mass starvation and bloodied by mortars fired at them by their former fishing buddies? Now that's entertainment.